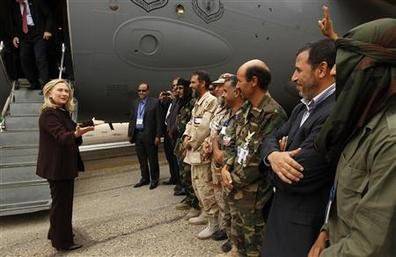 United States Secretary of State Hillary Clinton commissioned a new Libyan government to kill or at least catch the former leader of Libya. The Secretary of State announced this during her visit to Libya, in addition, she promised 135 million dollars in aid to the new authorities in Libya. At the same time, it was reported that the North Atlantic Treaty Organization is ready to complete a military operation in Libya, but it will take a political decision when the Transitional National Council can ensure the complete safety of the civilian population. And the new Libyan authorities still seriously fear Gaddafi.

US Secretary of State Hillary Clinton arrived in Tripoli on an unexpected 18 visit in October. Enhanced security measures were taken. Clinton is the first high-ranking official in the United States to visit Tripoli after her predecessor Condoleezza Rice’s visit in September 2008. Then Rice was very warm with the leader of the Jamahiriya. Observers at the time noted that Condoleezza Rice’s visit took place against the backdrop of “normalizing relations” between the United States and Libya. Although even then, Washington was planning the scenario of overthrowing Gaddafi and the destruction of the Jamahiriya, and the CIA did recruit the "fifth column" among the military and political elite of the Jamahiriya.

Before Clinton’s visit to Libya, it was reported that she hopes to strengthen US ties with the “new leadership” of the state and promote “Libya’s transition to democracy.” It should be noted that before the arrival of Clinton Libya was visited by British Foreign Secretary William Hague. He promised the PNS all possible assistance in restoring Libya, in addition, according to the British, London will send experts to the country who will train the new Libyan police and advise the new government on financial matters. British experts will also help in the demining of the country.

Arguing about the fate of Muammar Gaddafi in front of students in the capital of Libya, Clinton said that the US hopes that "he may be captured or killed soon," so that Libyans no longer need to fear him. This is the toughest statement of the American politician to the account of Gaddafi during the entire conflict in Libya, they used to speak only about the court.

Chairman of PNS Mustafa Muhammad Abd-al-Jalil and Prime Minister Mahmoud Jabril pleased news on the allocation of targeted assistance to 40 million dollars to ensure the safety and destruction of stockpiles of dangerous weapons, including chemical weapons. The United States has promised to provide full assistance in this matter.

The state secretary added that the US plans to restore and expand trade relations with the Libyan state, programs of cultural and educational exchange. Washington doubled the quota for Libyan students and resumes Libya’s participation in the Fulbright program (grants, scholarships, internships, etc.). In Libya, English language courses will work everywhere.

In addition, the new Libyan authorities will receive an additional 11 million dollars. Most of these funds are intended for operations to search for and destroy man-portable air defense systems that remained in the arsenals of the former Libyan army or were stolen during the war. There are fears that they will fall into the hands of terrorists. Part of this money will go to education and medicine. Washington intends to treat the severely wounded Libyan rebels in its medical facilities and to assist in the treatment of light wounded in the Libyan territory. The new authorities of Libya will receive American medical equipment and medicines.

The total amount of US aid to the new government will reach the sum of $ 135 million, including the amounts already allocated.

Clinton, in addition to orders to kill or catch Gaddafi, gave a few more orders. Washington is demanding to immediately unite "various militarized groups under a single command," to form a new national army. Control over it should be transferred to civilians. Also, the PNS should unite the country, that is, the US recognized that the new government still does not control the entire country.

It should be noted that the open war in Libya is fading, moving into the underground stage. Open resistance is noted only in the region of Sirte, the battle continues there. Moreover, NATO is already shifting responsibility for looting and violence against civilians in Sirte and other cities on the PNS fighters. This was announced by the official representative of the command of the Alliance "United Defender" Colonel Roland Lavoie. According to the French colonel, the entire responsibility for the protection of the civilian population and the use of salvo fire systems during the storming of the city lies with the military command of the PNS. Similarly, the PNS is responsible for the safety of the arsenals of the Gaddafi army. That is, in principle, the West puts the new government under tight control in advance, with the “double play” of the PNS they will be able to blame for genocide, mass robbery, loss of weapons, support of terrorists, etc.

17 of October was announced about the capture of Bani Walid, but whether the city was taken or the defenders themselves left (dissolved in the desert), or the city was ceded by agreement with the elders of the warfalla tribe, there is no information.

And in Tripoli, the demolition of the residence of the Colonel - Bab al-Aziz. According to the rebels, they demolish it because they want to "destroy everything that belongs to Gaddafi." At this place they plan to build a "building of a peacekeeping organization."

NATO command announces the transition from offensive air operations to monitoring the Libyan territory from the air. Will intervene only if necessary. According to Lavoie, combat missions will be reduced, although the Alliance Air Force will be in a state of constant operational readiness. Fully operation collapsed when PNS can provide security to the civilian population.

It can be said with confidence that the events in the Libyan state are approaching their logical conclusion. Gaddafi and his fighters have done a lot for the world, have gained time, but now the open war itself is almost over, it has passed into the stage of underground struggle, attacks and skirmishes. This was confirmed by Clinton’s visit. Interestingly, this war fully proves the thesis about the passivity of the vast majority of people. The Libyan war never developed into a people's stage — a limited number of Islamists, various regime opponents (detachments from Benghazi, Misrata, etc.), supported by NATO forces, and several thousand active Gaddafi supporters fought. The rest sat at home and were spectators of this bloody performance, part of which was paid for with their lives, health and property. And pay a further decrease in the standard of living.

Libya has ceased to be the main center of events, now all attention should be paid to Yemen, Egypt, Israel, Syria, Turkey, Kurds, Iran and Pakistan.

It is clear that the Transitional National Council is still only one of the forces in Libya, its days are numbered without the support of NATO. Therefore, their representatives express the fear of the "shadow" of Gaddafi. The head of government, Mahmoud Jabril, said that Gaddafi could proclaim a new state in the south of Libya, thereby leading the country to a split.

According to Dzhabril, the Colonel retained under his command still quite significant forces - about 10-15 thousand people of fighters (apparently, this is an exaggeration). These are mainly Tuareg tribes living in the south of Libya, in Algeria and in the north of Niger. In addition, Gaddafi representatives are trying to enlist support in a number of African states, where the former leader of Libya has maintained good contacts. According to Dzhabril, Muammar Gaddafi has only “two options left: either to try to undermine any new regime in Libya, or to proclaim a separate state in the south”. He is afraid of revenge from Gaddafi, who has not yet admitted his defeat and is “ready to do the impossible to destroy any new regime in Libya.”

The whereabouts of Gaddafi is unknown, he periodically appears on the air, speaking with audio appeals on the Syrian satellite channel of the TV “Ar-Ray”, calling on his supporters for resistance. Some believe that he is already outside Libya in one of the African countries where he is treated favorably. Others think that he is in the south of the country or hiding in one of the cities among his supporters. His elusiveness gives the PNS a lot of problems, as long as Gaddafi is alive or not behind bars, he is a symbol of resistance and another life.

Gaddafi retains a significant financial resource, according to some sources, up to 50 billion dollars, with a part in gold. This will allow him to organize resistance for some time, creating troubles for the PNS.

We are in Yandex Zen
Judgment in Tripoli. Saif al-Islam Gaddafi sentenced to death
Libya: after Gaddafi
17 comments
Information
Dear reader, to leave comments on the publication, you must to register.