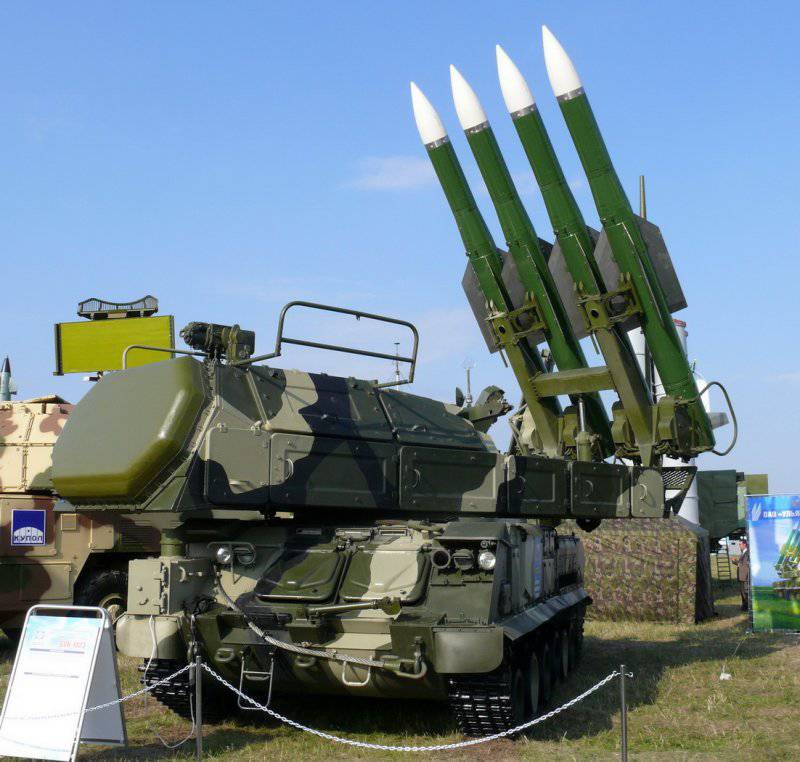 
The Ulyanovsky Mechanical Plant OJSC (UMP OJSC), which is part of the Air Defense Division Almaz-Antey Concern, is one of the world's leading manufacturers of air defense systems for the short-range and medium-range ground forces as well as radar systems. For the fifth decade, the company's products are delivered to dozens of foreign countries These are such world-famous systems and complexes as ZSU “Shilka”, ZPRK “Tunguska” and its modification - ZPRK “Tunguska-M”, product “Orion”, ZRK “Buk” and its modifications Buk-М1-1 ", Buk-М2Е ADMS. Design thought does not stand still, and today UMP OJSC offers new, more advanced air defense systems and complexes.

The lead manufacturer of the Buk-М2E air defense missile system is OJSC Ulyanovsk Mechanical Plant, and the head developer of design documentation for the complex as a whole and main combat equipment is OJSC Scientific Research Institute of Instrument Engineering named after Tikhomirov (Zhukovsky). The developer of the design documentation for the target detection station 9С18М1-3E is OAO NIIIP (Novosibirsk).

Buk-M2E anti-aircraft missile system is a multifunctional highly mobile medium-range air defense system that ensures the successful conduct of combat operations both in a noise-free environment and in conditions of intense radio countermeasures, affecting any type of aerodynamic targets, including tactical ballistic missiles, special aviation, cruise and anti-radar missiles, as well as surface targets (class destroyer and missile boat) and ground-based radio contrast targets. Placement of the combat assets of the complex on self-propelled caterpillar (or wheeled) high-cross-country chassis, short deployment and curtailing times (up to 5 minutes) provide high mobility of the complex. In terms of its performance characteristics, the complex significantly surpasses existing foreign analogues.

Automated control of the combat operations of the complex is carried out by the command post (CP), which receives information about the air situation from the target detection station or the higher command post (CPSU) and transmits target designations and control commands to six batteries via technical communication lines.

Each battery consisting of one self-propelled fire installation (SOW), attached to it by one starting-charging installation (ROM) or one radar of illumination and targeting (RPN) with two ROMs, has four target channels and eight shooting channels.

Shelling of escorted targets is carried out both single and salvo launches of anti-aircraft guided missiles (SAM).

The highly effective missile defense system used in the complex with a solid-propellant rocket engine and flexibly adaptable military equipment to various types of targets allows you to confidently hit targets in the entire range of the affected area of ​​the complex:
- in range - 3,0-45 km;
- in height - 0,015-25 km.
At the same time, the missile defense system provides the flight range to 70 km and flight altitude to 30 km.

In the combat equipment of the complex, modern phased antenna arrays with an effective command method of phase control are used, allowing the complex to simultaneously accompany and hit the 24 goals with a minimum time interval. The probability of hitting a target with one missile is equal to 0,9-0,95. 10-12 Complex Reaction Time p.

The real effectiveness of modern tactical and operational-tactical air defense systems is largely determined by their ability to conduct successful combat work on missile targets: anti-radar, cruise and ballistic missiles. The Buk-М2Е SAM can hit rocket targets with an effective reflective surface (EOP) 0,05-0,1 м2 and a probability of hitting 0,6-0,7.

The defeat of cruise missiles and other targets (such as remotely piloted vehicles - RPVs, unmanned aerial vehicles - UAVs, etc.) flying at low and extremely low altitudes, in conditions of wooded and difficult terrain, is provided by the complex due to the presence in the radar of the backlight and guidance (RPN) with an antenna post, rising to a height of 21 m.

Placement of combat vehicles on high-speed self-propelled tracked chassis, minimum deployment and collapse time of the air defense missile system (no more than 5 min. Without RPN), possibility of changing positions of main combat vehicles with 20-enabled equipment motivated by high mobility of the complex.

Modern hardware and software implementation of noise protection channels with confident functioning of the combat equipment of the complex in intensive active interference with power up to 1000 W / MHz, a highly efficient optical-electronic system (ECO), implemented on the basis of two matrix channels (thermal imaging and television) and allowing the main combat one to work around the clock the facility of the complex - SOU 9А317Е in ECO mode (practically without microwave radiation), provides high noise immunity and survivability of the complex.

In 2009-2010 The Buk-М2E air defense system was actually tested under conditions as close as possible to the combat ones, with multilateral flight and shooting tests conducted at test sites of the Russian Federation Ministry of Defense and foreign customers. In the most difficult weather and meteorological conditions (ambient temperature - up to plus 50 ° С, high dustiness of air, wind - up to 25-27 m / s) when exposed to intense noise barrage with power up to 1000 W / MHz, firing tests both for single and for and on several targets simultaneously in the affected area of ​​various classes and purposes, completed successfully. They were a real test of the ultimate capabilities of the Buk-М2E air defense system and confirmed its high tactical and technical characteristics, as well as the great potentialities that were laid down during the development of the complex.

The lead developer of the Tungusk complex and its modifications is the Instrument Engineering Design Bureau (Tula), the head manufacturer is Ulyanovsk Mechanical Plant OJSC. The main combat vehicle of the complex is the Tunguska-М2 anti-aircraft self-propelled gun (ZSU) 6С1М1, which is intended for anti-aircraft defense of motorized rifle and tank units of troops in all types of combat operations. The ZSU provides detection, recognition of nationality, tracking and destruction of air targets (tactical aircraft, helicopters, including hovered, cruise missiles, remotely piloted aircraft) when working from a place, in motion and from short stops, as well as destroying ground targets. and surface targets and parachute targets. For the first time, the ZSU achieved the combination of two types of weapons (rocket and cannon) with a single radar-instrumentation complex. 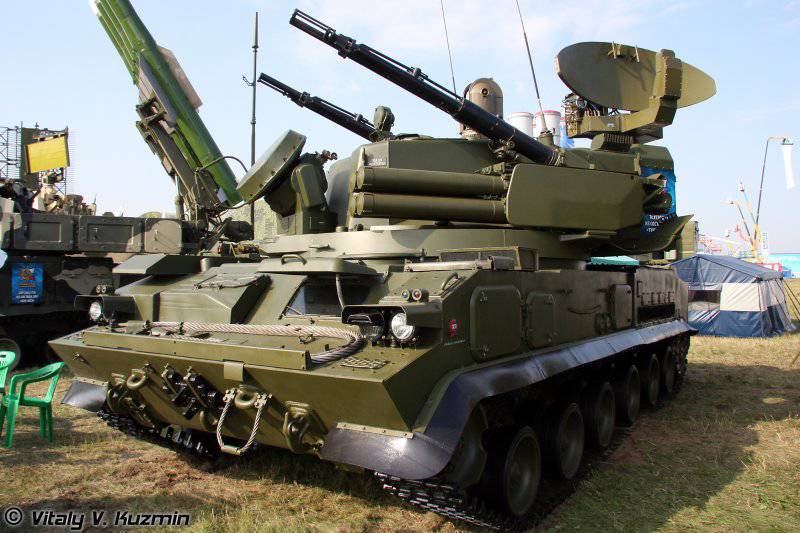 The ZSU cannon armament consists of two double-barreled high-temperature anti-aircraft guns of the 30 caliber mm. The high total rate of fire - up to 5000 shots per minute - ensures effective destruction of speed targets in the firing zone for a short time. The high rate of fire, combined with high pointing accuracy due to the stabilization of the line of the shot, ensures high efficiency of shooting at air targets in motion. Ammunition is 1904 30-mm rounds. Each machine has independent power systems.

Missile weapons ZSU make up 8 anti-aircraft guided missiles. The rocket is a two-stage solid propellant biciberian with a detachable starting engine. Targeting a missile at a target is a radio command with an optical communication line. High maneuverability, with overloads up to 35 g, allows you to hit speed and maneuvering targets. The average flight speed at the maximum range is 600 m / s.

The operating experience of previous modifications of the ZSU showed that it is necessary to increase the noise immunity of the installation when firing rocket weapons at targets equipped with optical interference, and also to introduce into the ZSU equipment for automated reception and target designation from a higher command post in order to increase the effectiveness of the combat use of the ZSU battery during a massive raid goals. The consequence of the implementation of these areas of modernization was the creation of the ZNU 2С6М1 "Tunguska-М1" with significantly improved combat performance.

For ZSU 2C6М1, a new rocket with a pulsed optical responder was developed and the rocket control equipment was modernized, which made it possible to significantly increase the noise immunity of the rocket control channel and increase the probability of hitting targets operating under cover of optical interference. Equipping the missile with a radar non-contact fuse with a range of operation up to 5 m significantly increased the effectiveness of the ZSU in the fight against small-sized targets. The increase in the operation time of the rocket elements made it possible to increase the range of targets hit by a rocket from 8000 to 10000 m

The introduction of automated data reception and processing equipment for external target designation from the command post of the type of industrial-command follow-up greatly increased the effectiveness of the combat use of the ZSU battery with a massive attack of targets.

The ZSU digital computing system has been upgraded on the basis of a new calculator, which made it possible to expand the functionality of the central computer in solving combat and control tasks, as well as to improve the accuracy of the tasks.

Modernization of optical sighting equipment made it possible to significantly simplify the process of target tracking by the gunner while simultaneously increasing the tracking accuracy and reducing the effectiveness of the combat use of the optical channel as a function of the gunner’s professional level.

Modernization of the radar system ensured the reception and implementation of data of external target designation, the work of the gunner’s “unloading” system. Also increased the reliability of the equipment, improved technical and operational characteristics.

The use of a more powerful gas turbine engine with a doubled resource allowed us to increase the power of the ZSU power system and reduce the drawdown of the power supply when working with the activated weapon targeting hydraulic drives.

Currently, work is underway on embedding television and thermal imaging channels with automatic tracking into ZNS 2С6М1, as well as upgrading the detection and targeting station (SOC) to increase the target detection area in height to 6000 m (instead of the current 3500 m) by introducing two angles the position of the SOC SOC vertical. Factory tests of the upgraded model ZSU 2C6М1 showed the effectiveness of the introduced modernization options when working on air and ground targets. The presence of television and thermal channels with automatic accompaniment ensures the presence of a passive target tracking channel and the pervasiveness of the use of ZSU missile weapons.

Providing combat work in motion, directly in the combat formations of the army units under cover, the Tunguska ZSU, according to the effectiveness of defense against low-altitude air attack weapons, is currently unparalleled in the world.

We are in Yandex Zen
ZRRK "Tunguska-M1"
Anti-aircraft gun-missile complex short-range "Pantsir-С1" 96K6
22 comments
Information
Dear reader, to leave comments on the publication, you must to register.