July 2 2015
38
The first half of the 2500th century was a time of dreamers. At this time, people dreamed of the North and South Pole, believed in communism, rushed with completely crazy projects. Construction of one-story buildings, a vessel for XNUMX passengers, Tanks weighing 1500 tons, an aircraft carrier and the development of spacecraft - all these people dreamed of. The specifics of the time was such that dreamers were easily among representatives of big business and government. As a result, some of them sought funding from others and implemented their projects. So the Empire State Building, the Titanic, the Ilya Muromets plane, the Tsar Tank and other projects that struck the imagination were born.


In this stories dreamers survived and the name of the all-terrain vehicle Snow Cruiser, which was designed and built by American Thomas Poulter. In 1934, Thomas took part in an Antarctic expedition that could cost its leader, Admiral Byrd, to live. Then, with only a third attempt, Thomas Poulter was able to make his way to an admiral locked in a blizzard on tracked tractors and save him. It was then that he set about trying to create a specialized transport for Antarctica. In 1930, Poulter worked as research supervisor at the Research Foundation of the Illinois Institute of Technology in Chicago. By holding this post, he was able to convince the director of the fund of the feasibility of his new project. As a result, over the course of two years, the organization’s team worked on the creation of the Antarctic snow cruiser, as Thomas Poulter called it. 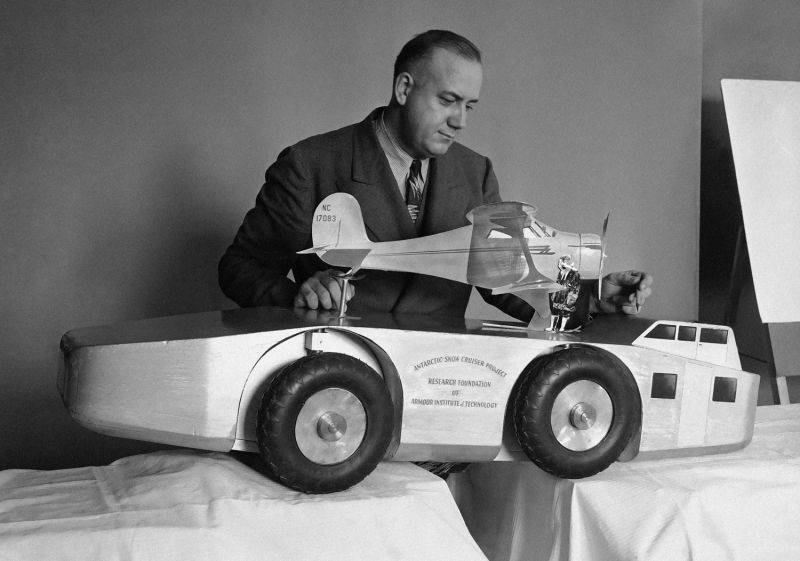 If you do not take into account the low air temperature, the complex snow-ice cover and the lack of oxygen, the main danger during trips to the Antarctic were cracks in the ice cover of the continent, which very often turned out to be invisible under a layer of firn or snow and for this reason were particularly scary for researchers. Poulter undertook to solve this problem with a “cavalry swoop”: it was enough to design a car of such a large length, and the overhangs so large that its nose would overcome the crack by the time the front wheel fell into it. "Snow Cruiser" was supposed to move on four wheels. For what reason, Thomas Poulter decided to stay on such a scheme is unknown. Most likely, he considered the tracked propulsion unit redundant and very voracious.

The layout of the "Snow Cruiser"

The four wheels of the all-terrain vehicle were shifted to the center of the body — its base was about half the total vehicle length. Tires with a diameter of 120 inches (just over 3 meters) and 33 inches wide were manufactured by Goodyear from cold-resistant 12-ply rubber. Two six-cylinder Cummins diesel engines of 11 liters and 150 hp were installed in front of the front axle of the all-terrain vehicle. each. These diesels powered two electric generators that fed General Electric's 4 electric motors with an HP of 75 power. each. Each electric motor was installed in its hub, while the space in the two-meter hubs was more than enough for them. Thus, the all-terrain vehicle created at the end of 30-s of the last century was a diesel-electric hybrid. At present, dump trucks are manufactured according to this scheme. 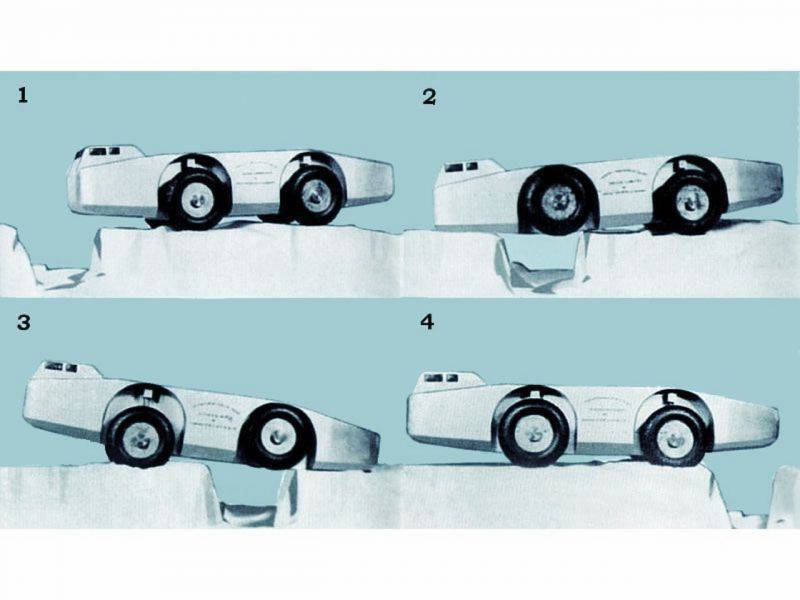 Was unusual and all-terrain suspension. She had adjustable ground clearance. More specifically, the wheels of the car could be drawn into the arches on the 1,2 meter. Thanks to this solution, firstly, it was possible to warm the rubber and clean it from frozen ice (hot exhaust gases from diesel engines were fed into the wheel wells), and secondly, the all-terrain vehicle had to overcome cracks in the ice in this way. First, the Snow Cruiser had to reach the front edge of the crack with its front overhang, and then pull the front wheels into the body, and, “rowing” only with the rear wheels, push the front axle ashore. After that, the front wheels lowered, and the building on the contrary was drawn into the body. Now the front axle had to pull out the all-terrain vehicle. It was envisaged that this procedure could be carried out in 20 receptions (all actions would have to be performed in manual mode), and the time for its implementation would be 1,5 hours. In addition, all four wheels of the all-terrain vehicle were made manageable - you could try to turn around "on the patch" or move sideways.

The car turned out quite massive. The body of the all-terrain vehicle had a 17-meter length and a ski-like bottom, the height was from 3,7 to 5 meters (depending on clearance), and the width was 6,06 meters. Through the cracks in the ice, the width of which did not exceed 4,5 meters, which the Antarctic glacier abounded in, the all-terrain vehicle had to literally “creep”, including due to the shape of its bottom, was also supposed to overcome the fields of firn (granular ice). 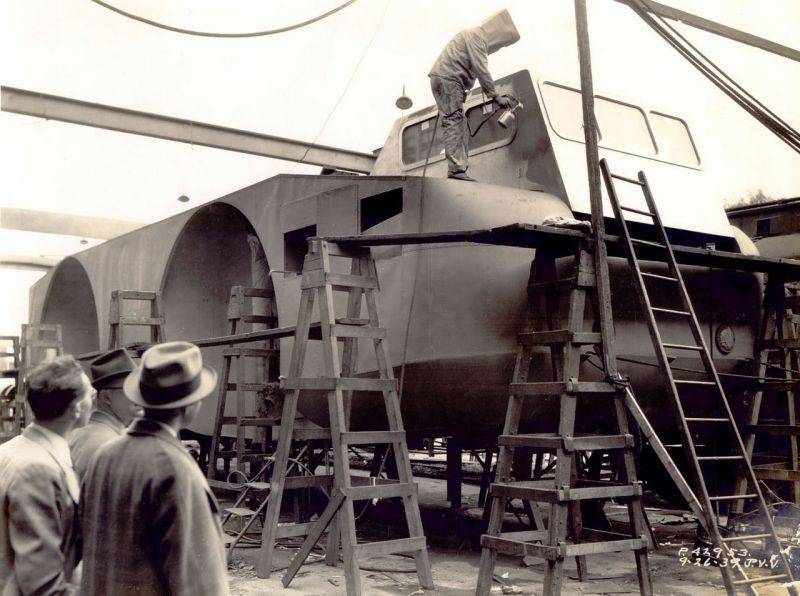 Inside the building of the “Snow Cruiser” there was enough space not only to accommodate a triple control room (moved upstairs), an engine room, fuel tanks on 9463 liters of diesel, but also for a mess room with chairs, a five-bed bedroom, a kitchen with a sink and a stove on 4 rings, a workshop with welding equipment and a special room for the development of photographs. In addition, the all-terrain vehicle had its own stock of equipment and provisions and two spare wheels, which were placed in a special compartment of the car in the rear overhang. 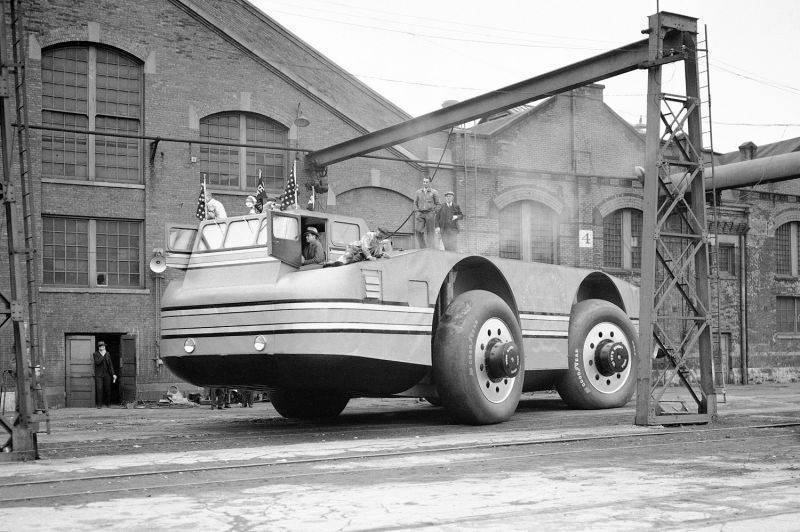 In 1939, Thomas Poulter presented his Snow Cruiser in the US Congress, so much so that he could even “spark” senators with his idea. Congressmen agreed to finance an expedition to deliver an all-terrain vehicle to Antarctica. A cash for the construction of "cruiser", almost 150 thousands of dollars (a very serious amount at the time), Poulter was able to collect from some private investors. After the approval of the US Congress was received, the expedition was scheduled for November 15 1939 of the year - the Antarctic Spring. At the same time, the yard was already 8 August. A unique all-terrain vehicle needed to be built and delivered to the ship in just 11 weeks. The story is silent about whether Pullman employees left their jobs and how long they slept while, but the “Snow Cruiser” was ready in six weeks.

October 24 1939, the first all-terrain vehicle was brought, and on the same day the “cruiser” headed from Chicago to the military port of Boston, where the ship was waiting for the North Star. The all-terrain vehicle’s dimensions really allowed it to be called the “Snow Cruiser”, it towered above the crowds of onlookers surrounding it, like an aircraft carrier in the port above other ships. Painted in bright red color to be noticeable in the snowy expanses of Antarctica, he had to go the way in 1700 km. 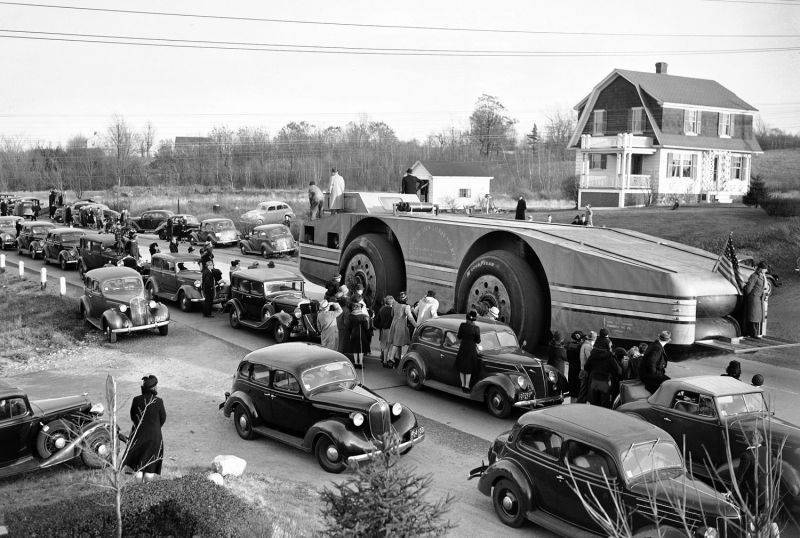 It is worth noting that the “cruiser” did not try to experience serious off-road, since the main task was to have time to arrive at the port by the appointed date. If Poulter and his brainchild were late for loading the ship, he would have sailed without him. But the road to Boston was eventually overcome successfully and on November 12, 3 the day before the ship’s departure, the Snow Cruiser ended up in the military port of Boston. To place a giant all-terrain vehicle on the deck of a ship (across the deck), the rear part of the car (spare tire cover) was removed. In this case, Thomas Poluter independently drove onto the ship’s deck along the ramp. 15 November 1939, as planned earlier, the vessel set sail for the shores of Antarctica. 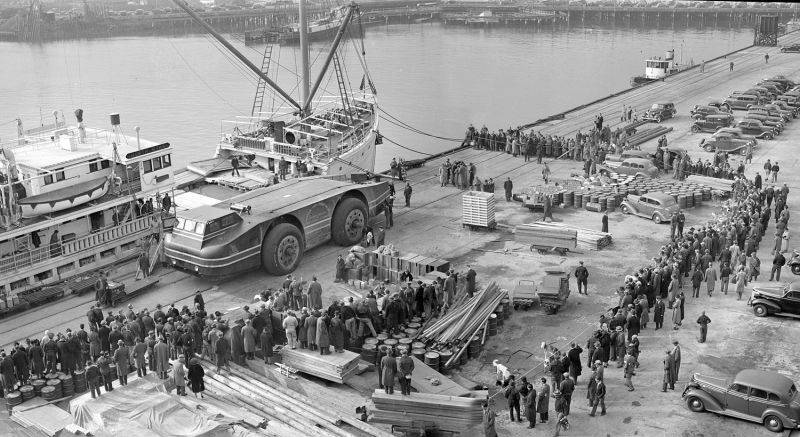 It was at this moment in this whole story that one could have put an end, since traveling along American roads and the snowy expanses of Antarctica turned out to be incomparable with each other and ended in the failure of the project of the American dreamer Thomas Poulter. 11 January 1940, the ship moored to the coast of Antarctica at Whale Bay. According to the route plan, which was drawn by Thomas Poulter for the US Congress, the “Snow Cruiser” had to cross Antarctica twice crosswise, having traveled almost the entire coastline and twice visited the pole. At the same time, the fuel reserve should have been enough for 8000 km of the way. In order to lower the all-terrain vehicle onto the land, a special ramp of wood was built. During the descent of the vehicle from the ship, one of the wheels broke the wooden flooring, but Poulter managed to push the gas pedal in time and the Snow Cruiser successfully slid into the snow, avoiding catastrophic consequences. 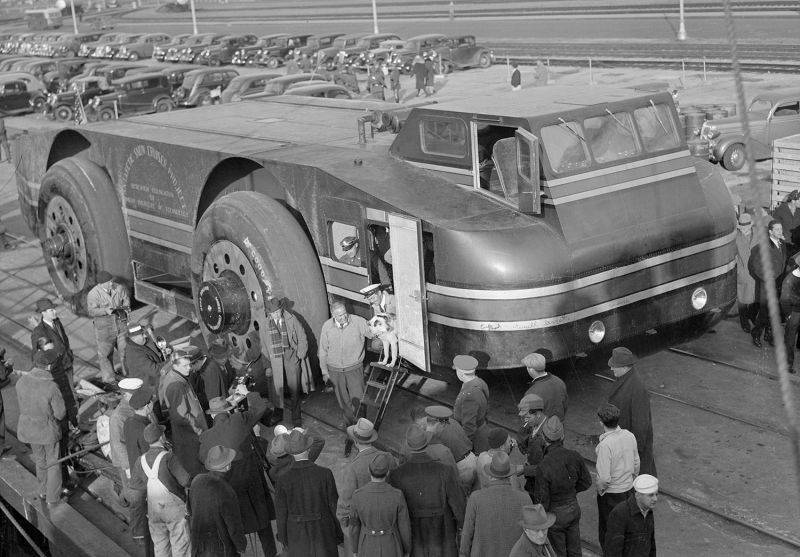 As a result, the team of Thomas Poulter went backwards on a journey across the expanses of Antarctica. In addition to the fact that the wheels of the all-terrain vehicle without tread constantly stalled, it turned out that there were other problems. For example, giant overhangs that were good for airfield tractor in the conditions of the snowy continent turned out to be only a hindrance - any all-or-one noticeable break in the surface of the all-terrain vehicle could not be overcome even in the topmost position of its suspension, resting its nose or tail into the snow. Among other things, the engines of the Snow Cruiser, despite the air temperature ten degrees below zero, were constantly overheating. After the 14 days of torment, the American dreamer simply threw his brainchild in the snows of Antarctica, saying goodbye to his dream of driving around the whole continent, and went back to the USA. By that time, the Snow Cruiser was able to overcome the entire 148 km of snow desert. 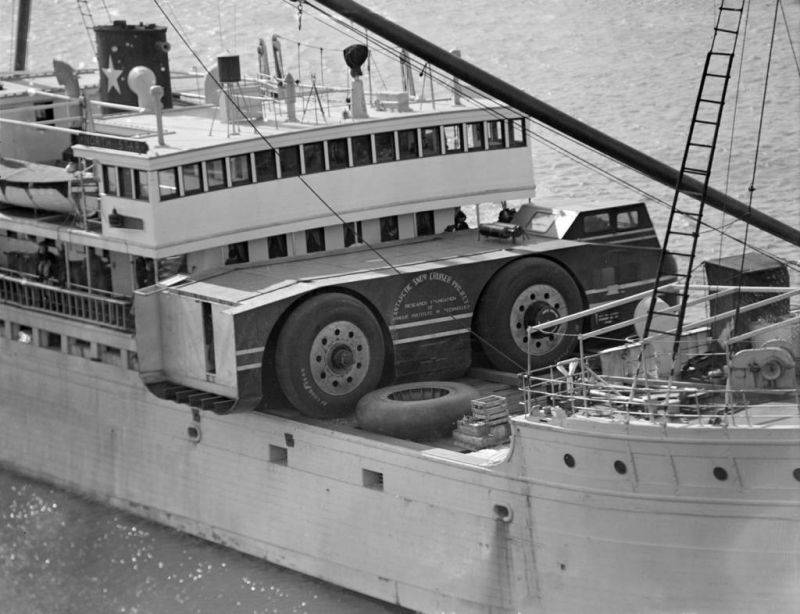 The rest of the crew of the all-terrain vehicle remained to live in the car as the scientific staff of the polar station. The Snow Cruiser turned out to be a very mediocre SUV, but a very good home in Antarctica. The heating system of his cabin was thought out quite well. The exhaust gases of diesel engines and coolant circulated in special channels, providing almost room temperature inside the “cruiser”, and they also melted snow in a special boiler. The stock of food and fuel in the car was enough for a whole year of autonomous work. The crew of the all-terrain vehicle covered the car with wooden shields, which finally turned it into a house and began to conduct research - conducting seismological experiments, measuring background radiation, etc. A few months later, before the onset of the Antarctic winter, the “Snow Cruiser” was finally abandoned by people.

The next time the polar explorers got inside the car at the end of 1940 of the year. Investigating the all-terrain vehicle, they concluded that it is in absolutely working condition - you only need to lubricate the mechanisms and pump up the wheels. However, on the eve of the US entry into World War II, the development of Antarctica was no longer a priority. 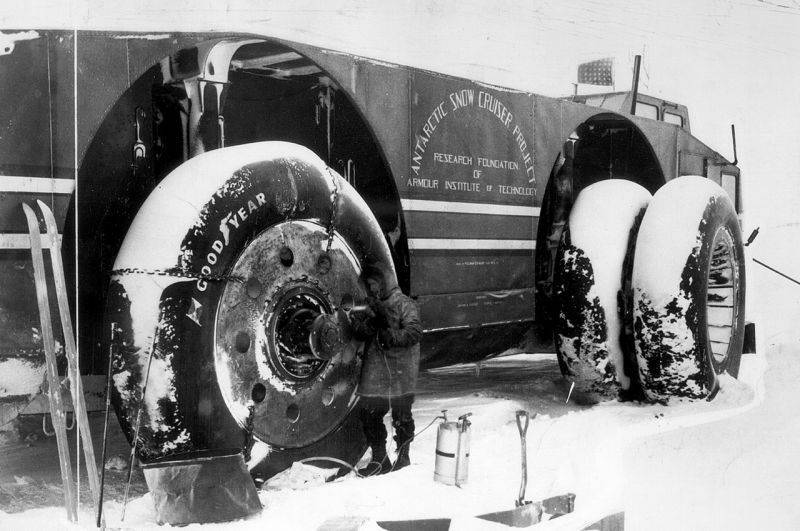 The next time the car was discovered already in the 1958 year. This was done by an international expedition, which established that for 18 years the all-terrain vehicle has brought several meters of snow. The location of the Snow Cruiser showed a high bamboo pole sticking out above the surface, which had previously been prudently installed by its crew. By measuring the snow height from the wheels themselves, the polar explorers were able to understand how much rain fell over a given period of time. Since then, no one has ever seen this all-terrain vehicle. According to one version, it was finally covered with snow. According to another version, he ended up in one of the gigantic icebergs that annually sail from the ice shelf of Antarctica, after which they drown somewhere in the waters of the World Ocean located to the north.