25 May 2013
136
Destroying the T-VIH "tiger" and the T-VIB "royal tiger" was far from easy. To verify this, we compare the tactical and technical characteristics:


The Tiger had a long-barreled cannon and could hit the thirty-fours from the 1,5-2 km distance, and the T-34 from the 300-500 m distance, and even then only on the side of a sabot projectile. 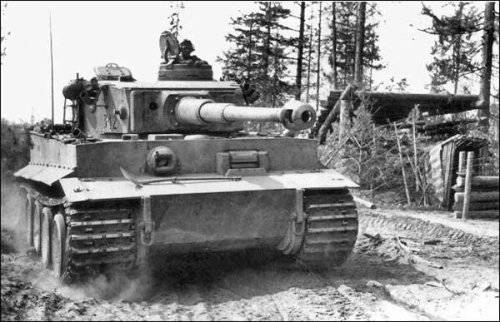 The words sometimes encountered in the front press that “tigers” burned in battle as matches, merely an aphorism, no more. And then, heavy German Tanks they were often confused with the modernized T-IV medium tanks, in which the gun barrel was "extended" in 1942, and armor was strengthened to somehow equalize with the T-34. 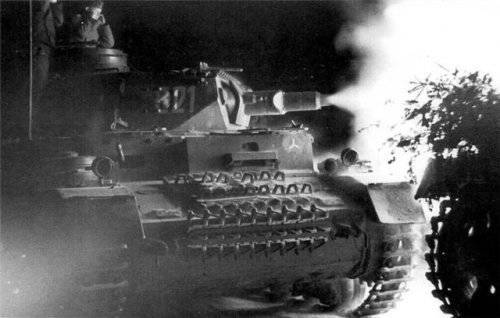 T-VIH "Tiger" on the Soviet-German front was massively used in July 1943 in the battle of Kursk. For half a year they were confronted by a heavy KV-1 tank (KV-1С) with a powerful 76-mm cannon 41,5 barrel with a caliber increased by armored frontal body parts increased to 105 mm armament in 34 year. The crews of the Soviet machines had to show the highest skill, to act mainly from ambushes, in order to win the duel against the “Tiger”. Rescued and high maneuverability "thirty-four." Yielding to the "tigers" in the power of fire, she, in capable hands, often effectively opposed them. 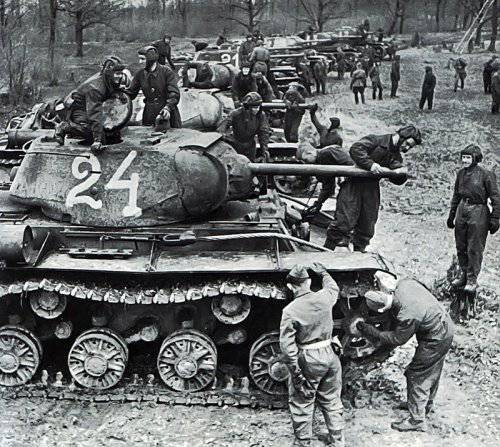 In the winter of 1944, more powerful T-34 / 85 tanks began to flow into the Guards tank units (the turret with an increased armor thickness had a long-barreled 85-mm cannon). Appeared in the army and the EC-2, subsequently recognized as the strongest tank of the Second World War. The 122-mm semi-automatic gun of the 1943 model installed on it had muzzle energy 1,5 times as large as the X-NUMX-mm T-VIH gun. At a distance of 88 m, a projectile weighing 500 kg and an initial speed of 25 m / s punched armor with a thickness of up to 790 mm. IS-140 itself had a booking 2-120 mm. The baptism of "Joseph Stalin" tanks received under Korsun-Shevchenkovsky in February 90, where they showed their unsurpassed fighting qualities. 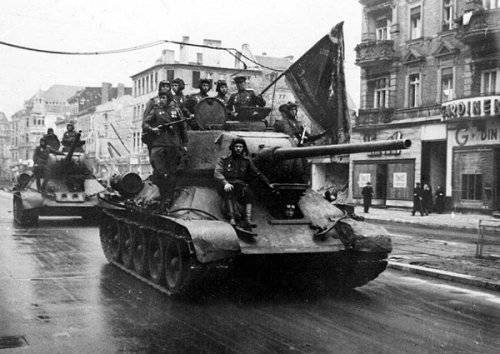 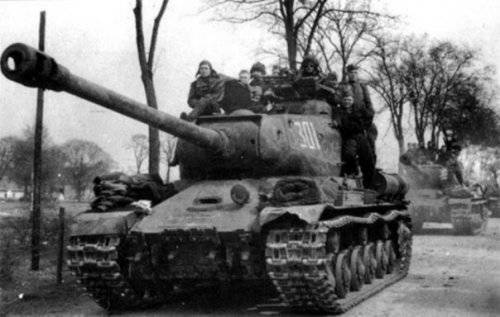 So who are these, these tank aces who pacified the Hitlerite menagerie?

The championship is shared by the crews of the "thirty-five" from the 1-th tank army of General Mikhail Katukov, who gained fame as real hunters on the "tigers" in the battle of Kursk. 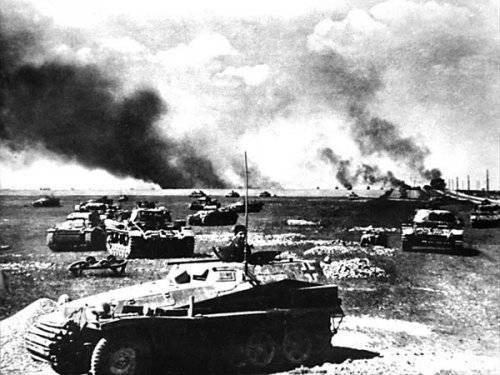 At dawn on the highway appeared 7 "tigers" and to the infantry regiment. A little later - another 3 tank columns with "Tigers" in my head. This did not bother the defenders. The whole day 8 "thirty-three" repulsed attacks.

Because of the shelters, they hit the enemy's cars aptly. The determination of the Nazis diminished, the battle began to wear a confused character. It was then that the crew of Lieutenant Georgy Bessarabov’s guard opened his account of the destroyed heavy German tanks. The T-VIH was the third car he burned by noon. Bessarabov destroyed her from ambush, when she framed the board. And then the crew won the duel with two more “Tigers”.

By evening, the fascists apparently guessed that only a handful of tankers were acting against them, and resumed the attacks on the Bochkovsky company, the later commander Mikhail Katukov recalled. Above the village hung "Messers". One of the bombs exploded next to the machine guard Lieutenant Sokolov. Tank, tilted, moved into a deep funnel. Bochkovsky took the padded “thirty-four” in tow. The rescue was already near, but the German shell landed in the car - the gun barrel flew away from it, the flame shot up above the engine. Sokolov died. Under a hail of shells, the caterpillar tore off Bochkovsky's tank. The company ordered his crew to pull the caterpillar, but another explosion — the languages ​​of fire ran down the Bochkovsky car. Crews of wrecked tanks and the 4 motorized infantry, who until recently defended their line, climbed onto the armor of the Bessarabov machine, and maneuvering among the gaps, she left the village. "

In the morning, a company of 5 vehicles again stood in the way of the Germans. Only for the 2 of the day of the fighting, the tankers destroyed the enemy's 23 tank, including several "tigers". Subsequently, Lieutenant Bessarabov brought the score to the destroyed Nazi tanks to 12, Of these, 4 - "Tigers". Unfortunately, 29 December 1943 was killed in the battles for the city of Kazatin.

7 The Tigers destroyed the ace of the 1 Tank Army (200 Tank Brigade) Lieutenant Mikhail Zamula. 6 "Tigers" and 1 "panther" knocked down the company commander of the 53 Guards Tank Brigade junior lieutenant Alexander Milyukov. He arrived at the front in 1942. He fought as a mechanic driver on the KB, moved to the "thirty-four", where he soon became commander. In February, 1943 in the battles for Kharkov, his crew won the first victory, and over the "tiger". In the midst of the Kursk battles, in a sharp duel, he burned down the “panther” and then another 3 “tiger”. In 1944, Milyukov graduated from the Saratov Tank School. Another 2 "Tigra", he chalked up already in 1945-m. For his courage and heroism, he was awarded the title Hero of the Soviet Union. 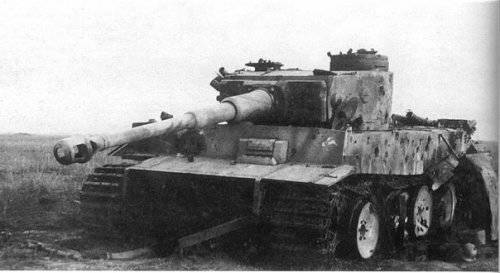 Grigory Brazhnikov distinguished himself at the Kursk Bulge. Initially, his crew destroyed the medium tank T-III and one T-V1H "tiger". But then, in one of the fights, Brazhnikov managed to shoot 350 - 400 and 4 "tigers" from the distance, spending 8 shells on them. True, the lieutenant got carried away and, in the heat of battle, did not notice the fifth, who managed to deliver a fatal blow to his thirty-four. Fortunately, the crew remained intact.

Lieutenant Khitsenko participated in the breakthrough of the enemy defenses in the area of ​​the city of Ruzhan (Poland). 15 January 1945. the crew entered into an unequal battle with 10 heavy enemy tanks and 5 of them hit. In the same battle, the brave tanker was killed. The X-NUMX of the T-VIH tank was destroyed by the tank commander of the 4-th Guards Tank Brigade Guards Junior Lieutenant Vasily Yermolaev.

That fight broke out with. Zanki Zhytomyr region 7 December 1943 of the year. At dawn, the Germans attacked their strongest T-VIH Tiger tanks.

... Half an hour after the start of the attack, 3 combat vehicles also appeared in front of the crew of Junior Lieutenant Vasily Yermolaev. Beat them in the forehead? Vasily thought for a second. No, nothing will come of it, Let me take a closer look. He waited for one of the Tigers to substitute the board, and opened fire.

A few shots, and Hitler's predator caught fire. Then another one flashed. Luck. And what a luck. But there was nothing for firing at the third - the sabot shells ran out. Only they could penetrate the thick armor of the "tiger". Now he could deal with the T-34 without difficulty. The shot thundered, and the thirty-fours of Yermolaev caught fire. But the crew did not leave the car. T-34 at full speed rushed towards the "tiger" and crashed into his side. Both cars exploded. Later, the tank commander of the younger guard Lieutenant Vasily Yermolayev and the driver’s mechanic sergeant Andrei Timofeev will be awarded the title Hero of the Soviet Union, posthumously. Of the 6 destroyed by the crew in that battle, the 4 tanks were the strongest tanks of fascist Germany - the T-VIH Tiger.

A German 501 heavy tank battalion with a new secret vehicle, the T-VIB super rotor tiger, arrived in a front-line lane, near the Polish village of Ogleduv, which was pre-cordoned off by the SS. Before the battle, the German battalion commander set up his tankers:
- "Royal Tiger" impenetrable. We just hunt for Russian tanks.

But I did not have to hunt. 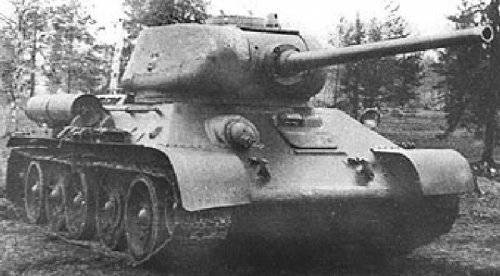 Oskin gave the command, and the Thirty-Four moved in a westerly direction. On the armor of the car settled down. It was not possible to enter Oglenduv: on the outskirts the crew noticed German tanks, there were over a dozen of them. Engage in battle - recklessness.

Under the cover of the onset of darkness, the Thirty-Four was frozen in a grain field opposite the village. A deep ravine separated from it, the road to the east stretched from Oglendów, and it could be easily controlled. Crew members disguised the car in sheaves. Then they made a snag - they put down the same big shocks in other places of the field. The night passed quietly. At dawn, Oskin noticed that a column of heavy vehicles appeared from the Oglenduva side. They looked unusual and formidable.

“They look like tigers,” Merhaidarov said. - But not they. Maybe "panthers"?
- "Tigers", "Panthers"? We will beat, without asking a surname, - Oskin said resolutely.

The crew commander knew: you need to beat on the sides. Such an opportunity will be presented - the tanks will go on the road. And he was not mistaken. Soon the column stretched out along the ravine, moreover, for some reason it stopped. Immediately 14 machines framed the boards under the 85-mm Thirty-Four gun. Oskin decided to hit the lead tank. Shot rang out. Hits - right under the tower.
- well! Guide below! - commanded Oskin. - The fire!

The second shell hit the side. Having destroyed armor, he set fire to the fuel tanks. The flames became mercilessly devour a new brainchild of the firm "Henschel". And Oskin shouted:
- On the second!

And a new torch flashed on the opposite side of the ravine.

The Nazis swept panic. Their tanks began to depart in Ogleduv. And only the third giant, who stood directly against the Thirty-Four, got ready for a battle by sending a cannon to the Soviet machine. Now everything was decided by seconds.

- I do not see the goal! - excitedly reported Merhaidarov.

Camouflage sheaf closed the lens sight. Oskin leaned to the waist from the tower, the sheaf flew off to the side. A shot rang out, and a third torch flared in the predawn haze.

By that time, reinforcements arrived. Soviet tankers went on the offensive. Oskin's thirty-four, pursuing the Nazis, broke into Ogleduv. And again, surprise: in the village without movement stood 3 royal "Tiger". Crews, apparently, were preparing for an offensive, but they expected that they would be brought into battle secondarily, and therefore tankers were not there. The SS, guarding the tanks, did not provide significant resistance. In short, the tanks fell into the hands of our fighters. 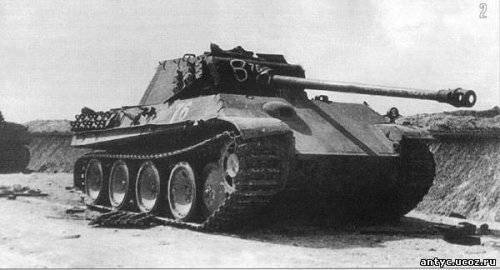 The beaten and captured "royal tigers" showed the commander of the 3 tank army Pavel Rybalko. He was amazed at their size and was extremely surprised that the “thirty-four” managed to deal with these menacing machines. Soon one of the giants was put on display in the Moscow Gorky Park of Culture and Recreation on public display by Muscovites. 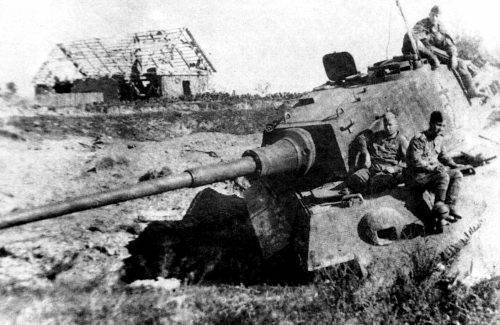 From the memoir literature is known and such an episode. During the battles on the Sandomir bridgehead, the tank battalion of the guard Major Vladimir Zhukov stumbled upon an 16 unknown tank during a night attack in one of the settlements. Their crews slept in village houses. The attack was so sudden that only three crews managed to jump into the hatches of their tanks and carry away what is called legs. The guardsmen captured the 13 of the all-purpose "Royal Tigers". 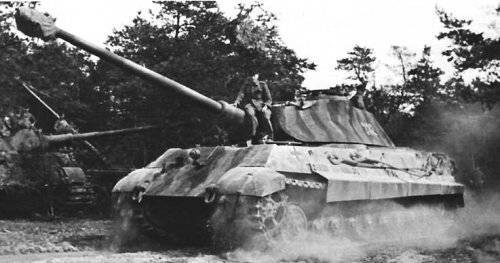 These machines were created by Henschel in response to the appearance of our EC-2. She produced a total of 489 tanks. For the first time, as we already know, they entered the battle in August 1944 on the Sandomierz bridgehead. No changes on the Soviet-German front caused.