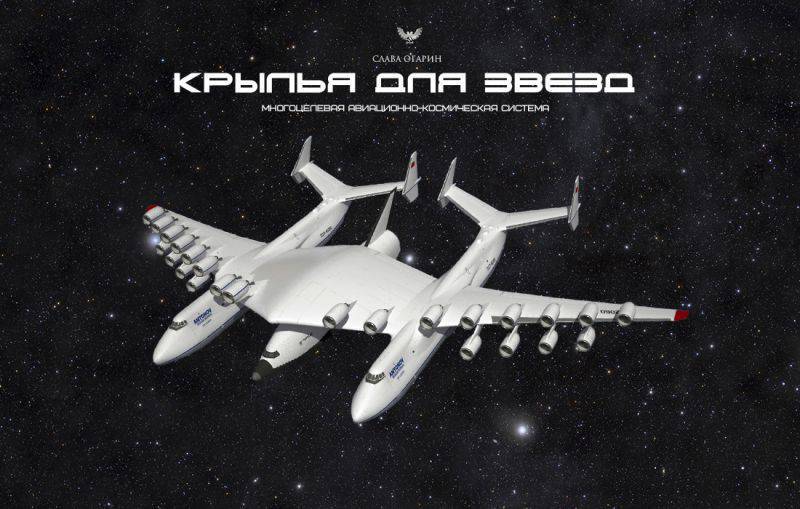 Thirty years before the first launch of the Space Ship Two rocket flight in the early eighties in the Soviet Union, they came to the need for space-free space launches. No wonder. The military power, which became militarily invincible thanks to the off-launch mobile air defense, no one else understood the importance of flexible mobility of weapons and their means of delivery. The beskosmodromnaya launch system was promising for civilian launches - in this case, the cost of delivering goods to a low reference orbit was reduced tenfold compared to the cumbersome and extremely expensive multi-stage missiles.

The system was called MAKS - a multi-purpose aerospace system. She was supposed to be a two-stage delivery, and both steps had to be fully refundable. They refused from missile execution right away - not because they chose one option and definitely beskosmodromny, but because this performance was implemented in a previous project - Buran-Energy, which eventually also promised to become a fully returnable system (see the following articles in the series Wings for the stars ").

The first stage was the mother plane delivering the rocket glider, the second stage was as high as possible. From there, a rocket glider, with a fuel tank attached to it, was launched along an inclined trajectory. This is called an air start. Next, the fuel tank is disconnected, and the rocket glider along the trajectory enters a low reference orbit, delivering the necessary cargo to it. His own marching engines will allow him to leave the orbit. The rocket glider will descend using its high aerodynamic quality, similar to the descent of the Buran and the American Shuttle. A rocket glider will be able to land on any first-class airfield, from which, in fact, the launch of the mother plane will take place.

By the way, the famous “Mriyu” - An-225, was just built for the beginning of the flight tests of MAKS. More precisely, the “Mriya” became the first experienced mother aircraft to be used for the Buran, and for MAKS they were going to build a more sophisticated and adapted An-325 tractor based on the “Mriya”. In the future, for the development of MAKS, a huge biplane with eighteen engines was planned, which should have put the Tupolev aerospace plane into orbit (this variant is shown on the cover of the article).

The design of the project was entrusted to the Molniya NGO, Gleb Evgenievich Lozino-Lozinsky, who in the sixties had experience in developing the Spiral system, and in the 70-80s he developed the MTWC Buran. The development itself began even before the first flight of the Buran, using all the achievements of past projects. In 1988, a large cooperation of seventy enterprises aviation and the space industry developed a preliminary design in two hundred and twenty volumes. In confirmation of the design specifications, a large amount of experimental research work has been done on aerodynamics, gas dynamics, structural strength and other areas. Full-scale mock-ups of the tail of the orbital plane and the external fuel tank were made. The first instance of the An-225 Mriya base aircraft passed flight tests. The development of design documentation for an orbital aircraft and a fuel tank is almost completed. Over one and a half billion US dollars in modern prices were spent on everything.

In addition to the mother plane, the second stage was planned to be performed in three versions: 1) MAKS-OS with an orbital plane and a disposable tank; 2) MAKS-M with unmanned aircraft; 3) MAKS-T with a one-time unmanned second stage and a load of up to 18 tons.

Orbital aircraft assigned a wide range of responsibilities. It could be used for emergency rescue of crews of space stations and ships, for the repair of satellites and their towing from orbits, for reconnaissance purposes, both military and civil. Of course, the aircraft could also deliver cargoes and crew. But the priority and most desirable scheme of application was, of course, a military one - the orbital plane became a highly invulnerable and omnipresent instrument, both of retaliation and of a preemptive strike. Space systems based at many aerodromes of the country could in a very short time deliver an instrument of space war to orbit. In order to destroy enemy satellites, the stations, in the end, carry out bombardment of land and sea targets directly from space, while remaining inaccessible to any enemy escort, both then and now. The main thing is that the spacecraft could patrol space, remain in orbit for a long time, especially unmanned versions.

Thus, MAKS was the main trump card in the space and military race between the USSR and the USA. It was an incomparably powerful and much more workable project than the advertised President Defense Reagan Strategic Defense Initiative. Having carried out the project for several years, as it was planned, the Soviet Union was obliged to become a global leader in space and a military hegemon on Earth. It may sound pathetic, but it really is. What prevented all this, you know. Already in the nineties, the full-size mock-up of the tank transported from Ukraine was drunk for scrap because there was no money to pay for the parking space for it.

The project, in contrast to Burana, was previously based on the principles of self-sufficiency. According to calculations, the costs should have paid off in a year and a half, and the project itself could have yielded nine-fold profit in the future. At that time this system was unique until the last years, since not a single such device was developed all over the world. In addition, MAKS is much cheaper than missiles due to repeated use of the aircraft carrier (up to 100 times), the cost of removing cargo into low-Earth orbit is about one thousand US dollars per kilogram of payload. For comparison, the average cost of elimination is currently around 8000-12000 dollars / kg. The benefits can also include greater environmental friendliness due to the use of less toxic fuels. The MAX project in 1994 at the exhibition in Belgium received the highest award from the hands of the Belgian president. MAX then, as indeed, now, was undoubtedly a furore.

To this day, the main thing, despite the oblivion of the nineties and zero, is that the project is fully capable of resuscitating the modern Russian Federation. The potential of the idea has not lost its power even now - we also can well again become the first in space and significantly increase our military power by an order of magnitude, if not several orders of magnitude. In the states, this was realized and ordered to the notorious Ilona Mask with his SpaceX an exact conceptual copy of our MAX. The first unsuccessful launch of the light version, Space Ship Two did not become an obstacle to this - Musk announced the construction of the largest aircraft of our time - and this will already be a copy of our planned biplane with eighteen engines. Our “Mriya” cried, now she will be the second. And the United States will finally secure the status of a global now cosmic hegemon. And they will no longer need our “Protons” with the “Unions”, as well as our Soviet engines of forty years ago, with which we praise so much. And there is not far to the space bombardment. I'm not an alarmist, I just soberly assess the situation.

Ctrl Enter
Noticed a mistake Highlight text and press. Ctrl + Enter
We are
The project of the aerospace system "Blizzard"Barge haulers in orbit
42 comments
Information
Dear reader, to leave comments on the publication, you must to register.