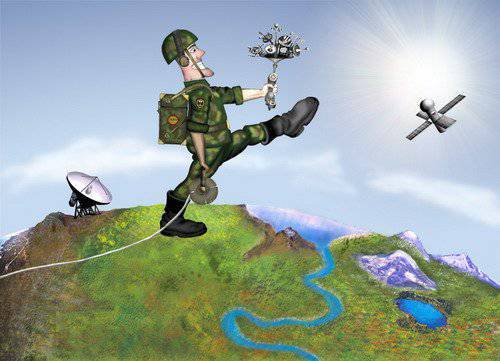 October 20 1919 of the year - the day of the formation of communications troops. On this day, by order of the Revolutionary Military Council of the Soviet Republic No. 1736 / 362, a communications department headed by the head of communications was formed as part of the Field Headquarters. The liaison service is allocated to the special service of the headquarters, and the liaison forces are divided into independent special troops. Thus, the structure of modern communication troops was laid.


Military communications are the basis of control of the Armed Forces. The efficiency of command and control of the troops, the timeliness of the use of military equipment and weapons.

In its development, the military connection went a long and difficult way, inextricably linked with history creating the Armed Forces, changing the forms and methods of their use, improving the art of war.

From the simplest sound and visual communication facilities for transmitting signals and commands directly on the battlefield to widely branched multi-channel, modern automated systems capable of providing communication for virtually unlimited distance with both stationary and mobile objects on the ground, on water, under water and in the air - this is the historical path of development and improvement of military communications.

A modern communication system is a complex multifunctional organism that includes numerous communication nodes for various purposes, many thousands of kilometers of radio, radio relay, tropospheric, wireline and other types of communication lines.


Military communications specialists are mastering new technology - modern methods of warfare impose completely different requirements on troop control systems. And the success of any maneuver directly depends on the speed of information exchange.

Junior Sergeant Andrei Belikov instead of the usual request for the radio uses a full video. The range of reception of this signal is unlimited - the Russian satellite constellation will deliver it to any place on the planet. The data transfer rate allows you to send any type of message: from the faxes and telegrams that have remained so far to the live video stream.

Such models of stations were adopted about three years ago. They became the first fundamentally new means of communication in the Russian army. The rest of the communications equipment park is being upgraded to work with a digital signal.

The most advanced to date is the automated command and control system, which is being tested in operational units. It will consist of several levels - from the headset for the rank and file to the staff machines, where all the information flow needed to make a quick and correct decision in battle will flow.
Ctrl Enter