Interesting facts about the development of atomic weapons in our country 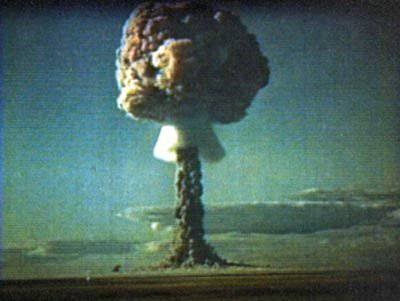 More than 66 years have passed since the moment when the American aviation for the first time in stories humanity has applied atomic weapon. Let us try to analyze the situation with how the first atomic bomb in our country was born.


In 1938-1939, one of the greatest discoveries of mankind took place - the possibility of spontaneous fission of a uranium nucleus. Immediately after that, a special conference was held in Kharkov, which was concerned with the practical application of this discovery. Prominent Soviet scientists expressed the idea that, on the basis of theoretical developments, it would be possible to create some kind of apparatus that would make it possible to use for some purposes the enormous, as it turned out, energy of the atomic nucleus.

With 1940 year begins active work on the embodiment of theoretical principles into real practice. Among the scientists who began to look for ways to solve this problem were A.F.Ioffe, I.V.Kurchatov, Ya.B.Zeldovich, Yu.B.Hariton, G.N. Flerov, KA Petrzhak and others. At the same time, many scientists understood that the practical side of using the internal energy of the atomic nucleus can be realized in the form of an unprecedentedly powerful weapon capable, as P. L. Kapitsa said at one of the meetings, to destroy not even a street, but a whole multi-million city. The Soviet leadership, realizing that work on the fission of uranium nuclei is very promising, actively supported work on this problem.

The first hypothetical version of the bomb, at the base of the explosion of which nuclear energy was to be used, appeared in the works of V.S. Shpinel and V.A. Maslov. They offered to place two uranium parts with a subcritical mass in a specific container and separate them with a partition made of explosive. At a certain point in time, the septum was blown up and the subcritical masses had to unite and turn into a single mass, which, in their opinion, could explode. However, Maslov and Spinel did not take into account a number of significant counteractions that would prevent the combination of two masses in the quantity required for a nuclear explosion. The project, of course, was not implemented.

After the Great Patriotic War began, the project to develop nuclear fission of uranium was minimized. However, many scientists tried to convey to the leadership of the country that such work could not be interrupted, since in this case the USSR could significantly lag behind the Western countries where work is in full swing (this is primarily the United States and fascist Germany). In December, V. Flerov, in one of his letters to I. Kurchatov, depicts his dummy bomb in December 1941, according to which it should be a metal cylinder, into the cavity of which it is necessary to introduce an assembly of uranium -235 in a special shell with sufficient acceleration. It should be noted that the idea of ​​using uranium -235 actually belonged to British and American physicists, who came to the conclusion that it was this element that possesses the unique properties of highly efficient splitting. This kind of information became the property of Soviet scientists thanks to intelligence from London.

The difficulty was to create a dynamic installation that would allow the uranium charge to be introduced into the cylinder at speeds up to 3 km / s.
In the year 1942, under the pressure of Soviet scientists, and as a result of familiarization with Soviet intelligence data on the progress of work on the problem of uranium nucleus fission in the West, Stalin decides to resume the activity of the “uranium group”. One can imagine how, in a country that was perhaps on the verge of a crushing military defeat, it was hard to conduct scientific work. Stalin ordered that Soviet scientists were engaged in "work on uranium" in Kazan. For this, a special laboratory was allocated and everything necessary for the normal activities of domestic specialists was provided.

At the same time, Professor I.V. Kurchatov, a participant in works on uranium problems, wrote quite critical letters to the Soviet leadership with calls to strengthen the “uranium” work so that the USSR would not lag behind the United States and Britain. And the lag could be significant if only because new intelligence data showed that the British are already actively experimenting with the creation of the atomic bomb, calculating the mass ratios of uranium-235 in various parts of such weapons. Stalin took the letters of Professor very seriously and ordered the creation of an 2 laboratory for solving the problems of atomic weapons.

From March 1943-th 2-i laboratory begins its active work. However, the Americans were still ahead of the Soviet physicists in terms of the practical use of the fission of atomic nuclei of uranium-235. In December, 1942 Enrico Fermi in Chicago builds the world's first uranium-graphite nuclear reactor. This spurred domestic physicists to more active work. It was in 1943 that the USSR received data from its British agents that it was found out in the West that a certain 235 element of the periodic system, which was called plutonium-94, could become an analog of uranium-239 when creating effective atomic weapons. “British” data at the same time period confirm that Western scientists confirmed experimentally the spontaneous fission of uranium nuclei, which, by the way, was discovered by Soviet physicists Petrzhak and Flerov.

In 1943, on the basis of his own work and intelligence data, I. Kurchatov formulates the most important thesis that further actions in the direction of nuclear fusion will make it possible to create nuclear weapons.

The 1944 and 1945 years became, in fact, crucial in the development of the practical side of using the fission of uranium nuclei in the USSR. At the highest level, it was entrusted to create workshops for the production of heavy water, as well as a plant to work on uranium hexafluoride, which was the raw material for the apparatus for the separation of uranium isotopes. Before that, I.V.Kurchatov asked permission to be involved in the “uranium” calculations of LD Landau.

In May 1944 of the year I.V. Kurchatov provides a new scheme for the structure of the atomic bomb. In this scheme, it was shown that an aviation atomic bomb is a cylindrical shell, at both ends of which there must be a working substance (either uranium-235 or plutonium-239). The bomb is activated by the explosion of a powder charge, which promotes the convergence of the two separated masses of the working substance. However, a new problem: obtaining a sufficient amount of uranium-235. At this time comes the most important intelligence from the United States, which sheds light on the method of obtaining the required amount of nuclear fuel.

To increase the intensity of the work of the 2 laboratory, Stalin decided to increase the status with the filing of MG Pervukhin and IV Kurchatov. As a result, the laboratory was directly controlled only by senior officials of the USSR and, in particular, L.P. Beria.

In the 1945 year, the 2 laboratory was tasked with creating a factory project for obtaining 75 grams of uranium-235 per day. Moreover, only one section of the plant had to create these volumes. In addition, the plans of the laboratory included the receipt of uranium boilers and technical specifications for the design of the atomic bomb.

In February, intelligence data from 1945 from the United States came in, analyzing which revealed that there was another way to create an atomic bomb, in contrast to the method being developed for bringing a radioactive substance closer. In addition, detailed data on the successes of German physicists in terms of creating an atomic bomb in ways other than those presented by Soviet physicists began to be received.

The creation of an atomic bomb in the USSR followed a different path, which is called implosion with an internal source of fast neutrons. It can be concluded that Soviet physicists treated intelligence information from the United States, Britain and Germany very seriously. At the same time, all data were carefully analyzed and added to domestic developments, which significantly accelerated the workflow.

In mid-July, the 1945 th Americans conducted the first in the history of testing atomic weapons, and in August of the same year attacked Hiroshima and Nagasaki. By the way, the Soviet intelligence reported to the senior leadership of the country exactly 10 days before the start of these tests about the tests in Los Alamos. Stalin reacts with lightning speed to the use of atomic weapons by the United States and puts the development of such weapons in the USSR at the forefront.

Professor I. Kurchatov continues to convince the higher authorities that the theoretical developments of LD Landau can speed up the process of creating atomic weapons in the USSR. LD Landau is starting active work.

Appeared and its analogue of the American Los Alamos in the city of Sarov or Arzamas-16. In 1946, several factories in various regions of the USSR were reoriented to work on the development of atomic weapons.

This gave its results: in December 1946, the first uranium-graphite-based boiler in the USSR was launched. In June, the first launch of a nuclear reactor in the USSR took place on 1948. A little more than a year later (in August 1949), the first Soviet atomic bomb RDS-1 was tested at the Semipalatinsk test site. By the way, it is still unknown why JV Stalin refused to approve the decision on testing atomic weapons.

After a report on successful tests of atomic weapons, J. Stalin decided to award all participants of the development. At the same time, I.V. Kurchatov received the title of Hero of Socialist Labor, was awarded the Stalin Prize in the amount of 1 million rubles, the ZIS-110 car, the cottage and the mansion house with all the furniture. In addition, I.Kurchatov, together with his wife, had the right to use any kind of transport on the territory of the USSR free of charge. Academician Yu.B.Khariton received a similar gratitude from the top leadership of the country. In addition to Kurchatov and Khariton, even more 30 scientists have received high awards, among them G.N. Flerov, A.P. Vinogradov and Ya.B. Zeldovich. The Order of Lenin was awarded to LD Landau, AP Alexandrov and a number of other scientists.

In his memoirs, Yu.B. Khariton speaks about the work of the team to create an atomic bomb as an unprecedented feat in difficult years for the country.

Do not forget that while American physicists could safely deal with the problem of creating nuclear weapons, the Great Patriotic War was going on in the USSR. The fate of the people and the whole country hung in the balance, but at that time talented Soviet physicists did not retreat from the problem, literally, neither day nor night. Yes, they received valuable intelligence on the progress of work on nuclear weapons in the West, but this can not be regarded as blatant plagiarism. After all, the very first creators of the atomic bomb, Americans, who used the theoretical base formed by Soviet physicists as early as the 30s, can be blamed on the same plagiarism. Therefore, nuclear weapons - the embodiment of thoughts and titanic labor, without a doubt, brilliant scientists and the USSR, and the United States, and Germany.

We are in Yandex Zen
The atomic squire folds his armor. Part of 1
Unread pages
8 comments
Information
Dear reader, to leave comments on the publication, you must to register.