October 19 2011
6
History knows many cases when ideas and projects that were not implemented could significantly change the history and development of mankind as a whole.
One of these ideas was developed on paper, but it never came to construction and production - this is the idea of ​​creating transport and landing submarines.


In the Soviet Union, in principle, as in other countries at the time of the start of World War II, submarines could either act according to their intended purpose or transfer a small group of troops or agents to their destination.

At the end of 1941, when the Red Army troops were surrounded on the Crimean peninsula, in the city of Sevastopol, they began to be supported by ammunition, food and military units, the civilian population was evacuated from the surrounded city. Supply of supplies and ammunition, as well as evacuation of people was carried out with the help of surface ships, but due to the powerful opposition and complete domination of the enemy both at sea and in the air, the losses of surface ships of the Soviet Union became catastrophic, almost no one returned after relief operations. Then they connected submarines to operations, during the siege they delivered more than 4000 tons of food and ammunition, evacuated around 1500 people with relatively small losses.

Underwater Experience fleet for the delivery of food and ammunition, as well as the transfer of a large number of people, he led the command of the Navy of the Soviet Union to the idea of ​​creating a new class of submarines for the transfer of landing troops and transporting large cargoes. Projects were proposed to create submarine barges for transporting various cargoes of large tonnage, which could be transported to the destination by a conventional submarine or project 605 submarine tugboat. Project submarine barges could be built in large numbers, due to the simplicity of the barge itself. There were practically no problems creating submarine barges, but there was a problem of transporting barges to their destination, because of the inability to quickly solve this problem, the Navy command abandoned this project.

After the end of the war, in order to quickly respond to the threat, the Soviet Design Bureau Rubin (TsKB-18) in 1948 year, on the order of the Navy command, developed the 621 project - an airborne transport submarine cruiser.

It was a completely new concept of building a submarine with two decks:
- carrying capacity 1550 tons (ten could be on board tanks, 12 trucks with three trailers, four cars, 12 85-mm artillery pieces, two 45-mm guns, three LA-11 aircraft, ammunition, fuel and provisions.
- troops in the number of 750 people;
armament submarine docks:
- two twin anti-aircraft 57-mm automatic guns;
- One 25-mm anti-aircraft automatic gun;
- machines for missiles, ammunition 360 units;
The same design office developed the 1952 project in 626, which was a smaller version of the 607 project for airborne transport operations in arctic conditions.

Key features of the 626 project:
- payload 300 tons (up to five tanks and fuel supply to them, or troops in the number of 165 people, or ammunition and provisions)
- armament: two 533-mm torpedo tubes, four torpedoes ammunition, two П-25 anti-aircraft guns.
In 1956, the design bureau Rubin developed the 632 project - an underwater minelayer that can carry up to the 100 the newest PLT-6 mines and transport 160 tons of various fuels. The mines were stored either in the “wet” version or in the “dry” version.

The 632 project was soon transferred to TsKB-16, due to the heavy workload of TsKB-18. By 1958, the project was ready for mass production, but the CPSU Central Committee adopts a seven-year program for the construction of ships and submarines and the 632 project did not get into it and the project was frozen.
His place is taken by the 648 project developed by TsKB-16 in 1958 on the basis of the 632 project. The submarine could take on board up to 1000 tons of fuel, 60 tons of drinking water, 34 tons of provisions in the calculation of providing 100 people for three months. 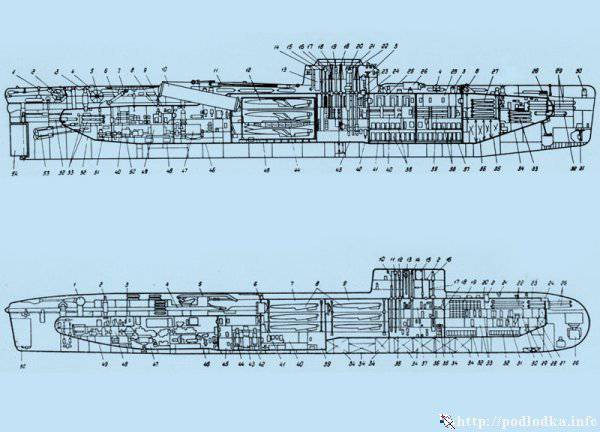 Project 648 submarine could transmit fuel under water, aviation seaplanes could take fuel, evacuate up to 100 people and carry up to 120 landing troops.
However, due to the difficulties of fuel transfer and increased interest in nuclear propulsion, the project in 1961 was frozen. The 648M project appears with two 6000l / s nuclear reactors. each, which increased the autonomy of diving to 25 days and ensured the operation of diesel-electric engines to 80 days. But it did not help the project to win a place under the sun.
The next project that received approval from the Navy Command is the 664 project.
The project of a large nuclear submarine - mine layer with transport-landing capabilities was launched in 1960, the work was done by TsKB-16. The boat could carry up to 350 people of the landing party or up to 500 people during the 5 days. The boat could carry up to 1000 tons of fuel, 75 tons of drinking water, up to 30 tons of provisions.

But soon, due to the complexity of performing all the functions of the submarine in one building - mining, transportation of goods and people, in the 1965 year, work on the project was suspended. In the future, due to the priority construction of submarine missile carriers, the project was completely frozen.
The main characteristics of the project:
- displacement 10150 tons;
- speed of 18 nodes;
- immersion depth 300 meters;
- autonomy of swimming 80 days;
- length 141 meter;
- width 14 meters.
The command of the Navy needed submarines capable of secretly delivering cargo and troops, work on the design of submarines of this class were continued. В1965 years, work began on the project 748 - transport-assault submarine.

According to the project, the boat could deliver up to 1200 people or twenty pieces of equipment, as one of the options was to deliver a reinforced battalion of marines with 3 floating tanks PT-76, 2 BTR-60, 6 mortars to a given point. But the customer, the Ministry of Defense, did not accept the order, and the project was frozen.
The main characteristics of the project:
- displacement 11000 tons;
- speed of 17 nodes;
- immersion depth 300 meters;
- autonomy of swimming 80 days;
- length 160 meters;
- width 21 meter.
In 1967, the design work on the large transport and landing submarine - minelayer was continued, the new project received the serial number 717, continued to deal with the TsKB-16 based on the 748 and 664 projects. It was supposed to be the largest submarine cruiser at that time with the possibility of covertly delivering 800 people and 4 BTR, or up to 20 tanks and armored personnel carriers, could evacuate civilians, troops and the wounded.

When reviewing the project in 1972, the Ministry of Collection puts forward a new requirement for the submarine cruiser - the rescue of crews of sunken ships and submarines. Consideration of the revised project was postponed to the end of 1976.
At that time, in the Soviet Union, priority was the construction of missile submarine cruisers, and as it turned out, in order to build the 717 submarine cruiser, it was necessary to use the power from the submarines under construction weapons on board and nuclear reactors. Therefore, the Ministry of Defense suspended the 717 project, and it was no longer considered.
The main characteristics of the project:
- displacement 17500 tons;
- speed of 18 nodes;
- immersion depth 300 meters;
- length 190 meters;
- the width of the 23 meter;
- draft 7 meters;
- team 111 people;
- autonomy of navigation 75 days, with the landing of 30 days, with wounded and civilian - 10 days;
Armament:
- six 533-mm torpedo tubes, ammunition for 18 units;
- two mine tubes, ammunition of 250 units;
- Two 23-mm anti-aircraft guns;
This is the end of the era of the transport submarine ships, but history also knows the projects to create underwater tankers to deliver fuel to hard-to-reach places and ships in the open sea.
So, in 1960, the 681 underwater tanker was designed, it was intended primarily for the auxiliary fleet and civilian fleet, the tonnage of 24750 tons, and two atomic reactors. 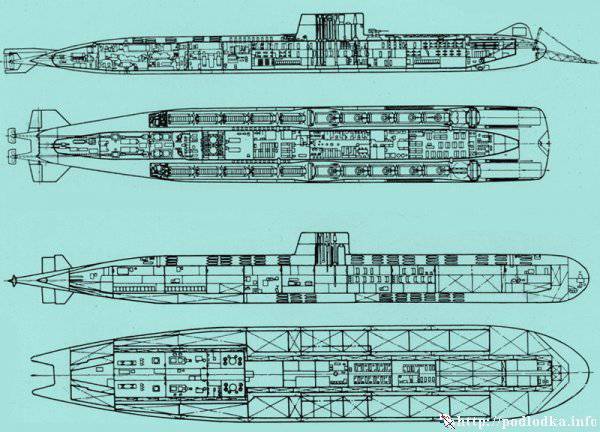 In 1973, the Central Design Bureau 16 began to design the submarine tanker project 927, but none of the projects went into production. 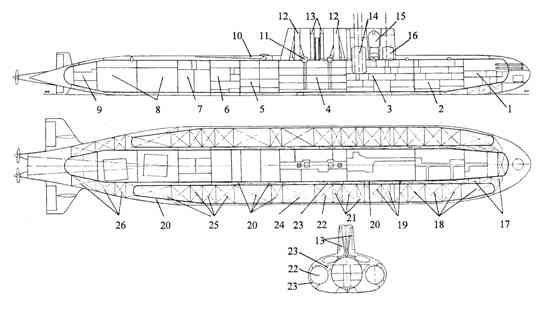 Once again, interest was shown in submarine tankers in the 90 years, TsKB-16 began designing an underwater tanker capable of delivering fuel in arctic conditions. The tanker could transport up to 30 000 tons of fuel and carry up to 900 standard cargo containers. The tanker was fully loaded in 30 hours. However, the financial crisis and the collapse of the Soviet Union left the project without a chance of embodiment in the metal.