Alexander Lukashenko on the Eurasian Union 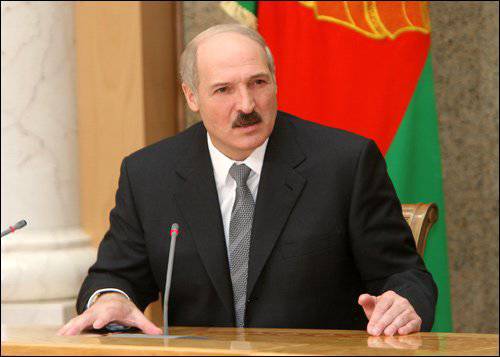 
The Belarusian president believes that the time has come to talk about the main thing - “About the life of our peoples in tomorrow,” about the fate of post-Soviet states and their prospects, “about our place under the sun.” Putin’s publication is a “real event”, Russia for the first time “clearly and unequivocally” declared the priorities of relations with the Union republics of the former USSR. De facto, this is the foreign policy program of the presidential candidate.

According to Lukashenko, the “right strategy” was voiced. There is little internal national consolidation of Russia; for complete success, it is necessary to build relations with our neighbors on a mutually beneficial and equal basis. Without this, there will be no stability and security for either the Russian state or its neighbors.

The Belarusian leader does not share the views of skeptics about the "bluff", Putin's election "populism", since the integration strategy is directed not only to the population of Russia, but also to its neighbors, to all world centers of power. This “powerful signal” to the whole world, having received it, everyone must draw certain conclusions, bluff in this case - it’s more expensive for us. That is why the reaction of some external forces "devoid of enthusiasm." They are not happy with the restoration of an international player with serious production, technological, resource, intellectual potential. It is especially important to reflect on the fate of integration in this difficult time that the whole world is going through.

Lukashenko reiterated his position on the collapse of the USSR, which he shared with Putin, calling him "the deepest, most tragic mistake of the 20th century." In his opinion, the Union "could and should have been improved," changed, but not destroyed. All civilized nations of the planet have long gone towards integration, and in one fell swoop we destroyed “the greatest wealth” —community, unity, cooperation. For the sake of personal ambitions and interests.

In an era of global financial crisis, increased uncertainty and chaos, it is clear that only the creation of a unification union that can help maintain stability in the post-Soviet space can be a counterbalance to this. For Belarus, integration with neighbors "was, is and will be a natural way of development." There is also a serious base for the integration process - the Union State of Belarus and Russia, in fact, two states became pioneers in integration in the widest range of spheres of life. The Union of Russia and Belarus has become a catalyst and a large-scale laboratory of deep integration. For example, the Belarusian-Russian Agreement on the Customs Union 1995 of the year served as the foundation for the legal framework of the Customs Union of Belarus, Kazakhstan and Russia.

According to Lukashenko, while the movement is going slowly, very slowly, if the political leadership of the countries has a firm common position, then the bureaucracy should unfold faster. And most of all in this process depends on Russia.

In building the Eurasian Union, it is impossible to avoid creating a solid socio-political superstructure, certain supranational bodies, including political ones, of a new single currency. But the sovereignty of our states will be preserved.

The President noted that this integration project cannot be confined only to the Western vector, the most important task is close integration with countries and "economic associations in the East and above all with our strategic partner China." The Asia-Pacific region is very important for the development of the Eurasian Union.

Summing up his article, Lukashenko stressed that concrete actions should follow the words.
Ctrl Enter

We are in Yandex Zen
A great interview with Sergey Lavrov: about Ukraine, Obama and Iran
Nikolay Silaev, Andrei Sushentsov: Georgia after the elections and prospects for Russian-Georgian relations
29 comments
Information
Dear reader, to leave comments on the publication, you must to register.