Helicopter "Three-eight" to replace the "Eight" 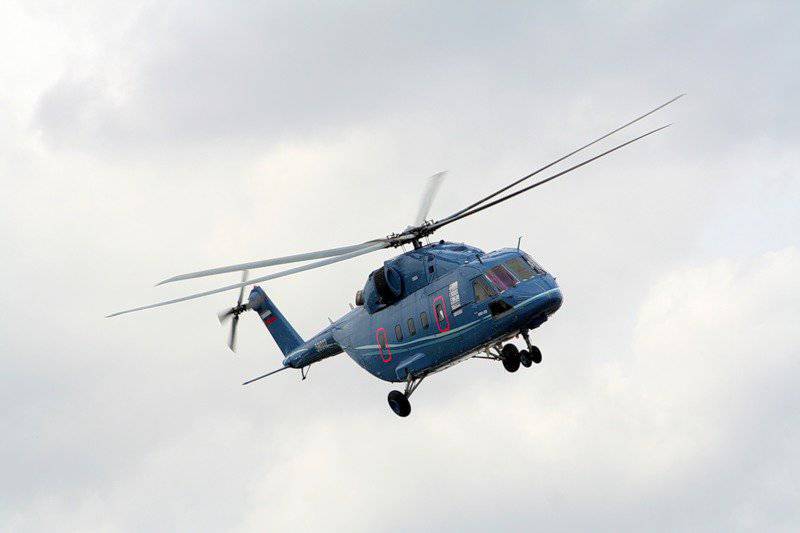 The development of helicopters, observed in recent years, by the middle of this decade should bring this industry to second place in terms of world military exports, according to the World Trade Analysis Center weapons. At the same time, among helicopters, more sold and bought, as now, will not be fighting, but multi-purpose vehicles. But such a rise in the industry will be only by 2014-15 year. And helicopter builders of the whole world are already preparing for it. It is understandable: if you can’t give the market a car that meets its requirements, you lose your share of it.

So the Russian holding “Helicopters of Russia” does not want to lose its position, at least. So, at the last MAKS-2011 showroom in August, several helicopters were presented at once. These are Mi-26Т2 with updated electronic equipment, Mi-34С1, recently made its first flight, and a promising project Mi-171А2.

In addition to these helicopters, the prototype Mi-38 was once again presented. This helicopter is currently undergoing tests, but it is expected that it will go into series in 2014. It will be produced in Kazan. By the end of this year, perhaps, the first contracts for the supply of a new car will be concluded.
The current tests are conducted on two machines - OP-1 (first flight in 2003 year) and OP-2 (first flight in 2010). They were initially equipped with two Pratt & Whitney PW 127 / 5 turboshaft engines with maximum power up to 2500 hp. Initially, when the development of the helicopter was just beginning (the end of the 80-s of the last century), it was planned to put on it the engines of the Klimov company TV7-117В (power up to 2350 hp). But the difficult situation of the nineties thwarted these plans. Klimovskie engines were brought to a state suitable for flight tests, relatively recently. So far, the cost center for them. Mile received a total of six domestic engines. So, most likely, the helicopter will go into the series with Pratt & Whitney.
Nevertheless, the beginning of the supply of TV7-117В will allow to run-in and domestic engines - they will be installed on the first prototype. 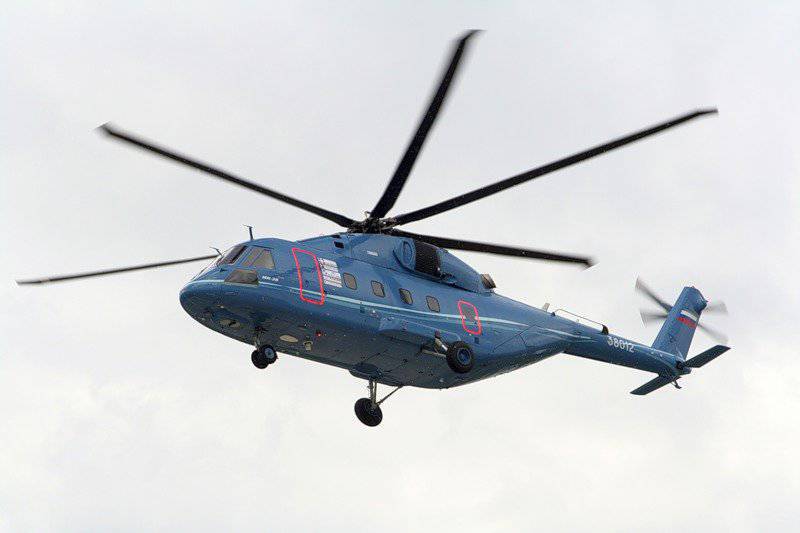 On both experienced and all serial helicopters, the engines are installed behind the main gearbox. This was done to reduce noise in the cabin and to increase the safety of the crew and passengers in case of an emergency landing. Another "nuance" to reduce the negative effects of emergency landings - energy-absorbing chassis. Like the Mi-8, it is made non-removable.

Where are the big differences from experienced helicopters are equipment. OP-2, in accordance with the current trends in the development of aircraft, received a complex of avionics IBKO-38 (developed in Transas). This complex is created in accordance with the concept of "glass cabin". Representatives of Transas and MVZ them. Mile argues that IBCO-38 allows not only to remove a flight engineer from the crew, but even to overhaul the duties of a co-pilot. In the case of the passenger version of the helicopter, the co-pilot may even be not so much a pilot as a steward. Also, the designers did not forget to equip the Mi-38 with a system for monitoring the health of the onboard equipment. This system, along with a number of other "small" innovations, according to the developer, reduces the complexity of maintenance of the helicopter. Compared to the Mi-8, the Mi-38 requires almost twice as little effort to carry out the work. 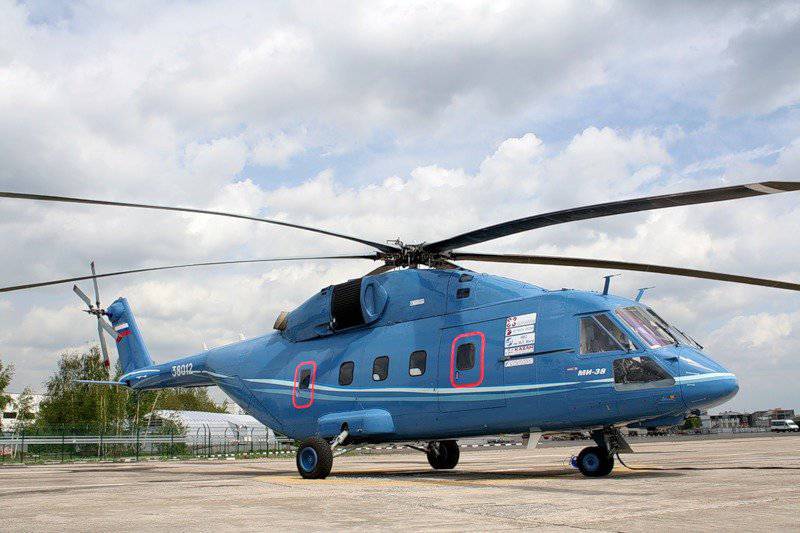 The design of the Mi-38, both experienced and future serial, is mixed: the power elements are metallic, and composites are widely used in plating. The blades of the propellers, as well as on some previous Milev helicopters, are fiberglass plastic, made according to the technology of continuous winding. The rotor has six blades, the steering has four. At the same time, the latter has an X-shaped design, like on a combat helicopter Mi-28. All blades are equipped with an electric anti-icing system and a damage sensor.

Mi-38 multi-purpose helicopter. For this reason, different layouts of the cargo compartment were originally developed. Possible equipment of the helicopter as a cargo or passenger. If the second option is chosen, then up to 32 passengers can be accommodated in the cabin with luggage. In the case of helicopter equipment in the VIP-version, of course, passenger seats will be less. In the medical version of the Mi-38 can carry up to 16 injured on stretchers, accompanied by 2-3 doctors. The cargo version of the helicopter with a maximum take-off weight (15600 kg) can carry up to 6 tons of cargo in the cargo compartment. On the external suspension Mi-38 raises a ton more.

Flight data for helicopters with PW 127 / 5 engines are as follows: the maximum speed is 320 km / h, the cruising speed is 285. The distance to 1300 km, and the practical ceiling just over 5 km. At the same time in the recent (early October) test flight, the Mi-38 reached an altitude of 8000 meters, which is a great achievement for helicopters in general. Senior test pilot cost center them. Mile A. Klimov states that a helicopter with the required loading can reach a dynamic ceiling in 9 km. 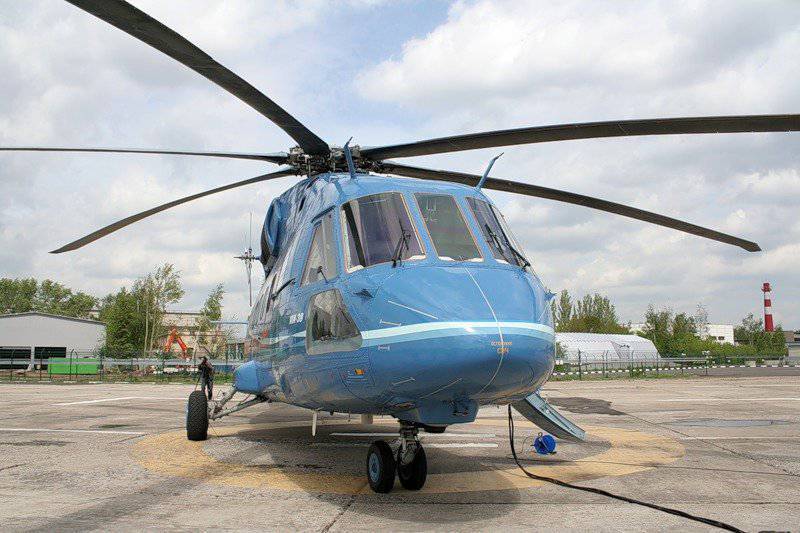 Work is underway to improve the characteristics already achieved. In particular, it is planned to increase the maximum take-off weight by almost a ton due to the payload. Also, a number of potential customers want to see a wider side door on the new helicopter. This wish will also be taken into account soon. Most likely, all the innovations together will appear only on the fourth prototype machine, which will be built next year. And now they are finishing the construction of the third helicopter. The exact composition of the equipment OP-3 and OP-4 was not disclosed, however, it can be assumed that at least the fourth car will have domestic engines.

It is expected that the new helicopter will be purchased by those countries that already have experience in using the Mi-8, in addition, the Mi-38 has a number of common points of use and maintenance with it. This "continuity" can provide good prospects for the Mi-38 - the G8 are now flying in more than fifty countries of the world. 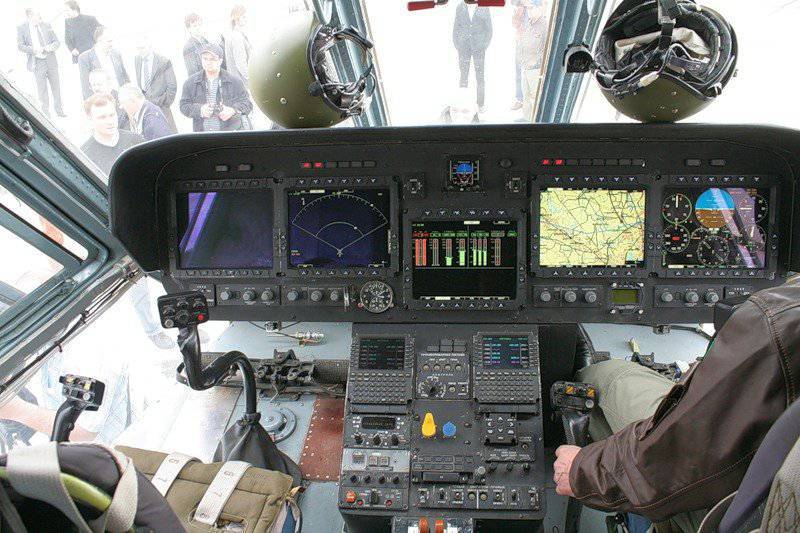