Traces of the war on satellite imagery Google Earth 2015 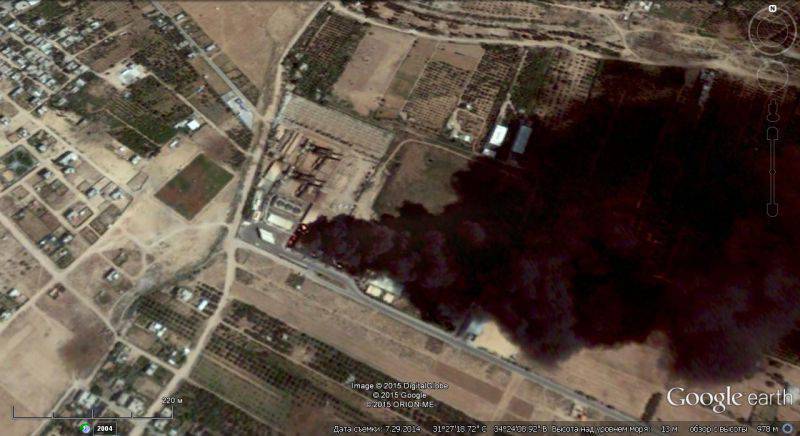 In 2014, more than 10 major armed conflicts have been observed worldwide. Some of them can be seen in the pictures of Google Earth. Perhaps the greatest interest for us are the images, which can be judged on the scope of military operations in the south-east of Ukraine.

As is known, most of the population of the eastern regions of Ukraine did not support the coup d'état that occurred in Kiev at the beginning of the 2014 of the year. Opponents of "Euromaidan" in this region put forward the slogan of federalization of Ukraine and the requirement to preserve the official status of the Russian language. The new authorities of Ukraine, in turn, declared a wave of protests in the south-east a manifestation of separatism and a threat to the existence of the Ukrainian state. The beginning of the civil war in Ukraine can be considered 13 April 2014, when the leadership of Ukraine announced the decision to launch the ATO in eastern Ukraine with the involvement of the armed forces. 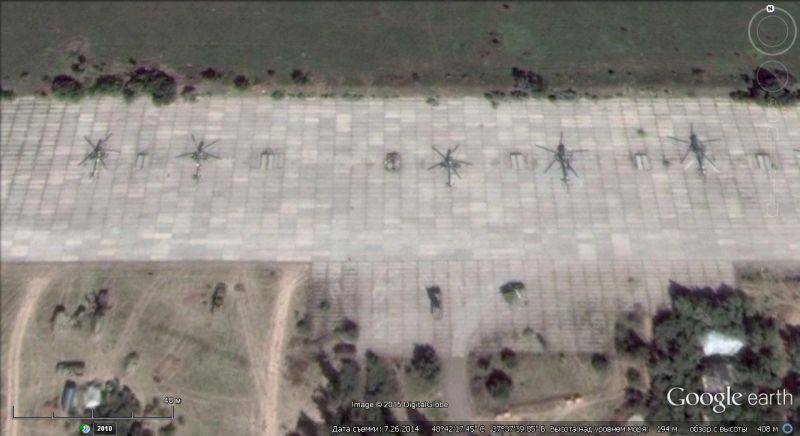 Until the end of April, 2014, the confrontation between supporters of federalization and Ukrainian security officials was limited to periodic clashes, raids and attacks on roadblocks using small arms weapons. Gradually, the Ukrainian armed group was reinforced by armored vehicles, helicopters, and shelling and aerial bombardment of settlements not controlled by the Ukrainian military began.

To suppress Ukrainian actions aviation Independence supporters tried to take control of the airfields occupied by the Ukrainian military.

At the end of May 2014, the fighting for the Donetsk airport began. As a result of months of fighting, the airport’s buildings and structures were completely destroyed, however, in the 2014 pictures taken in the summer and autumn, one can see relatively minor damage to the new terminal building that occurred on 26-27 in May as a result of the attack of Ukrainian Su-25 attack aircraft and Mi-15 helicopters 24. 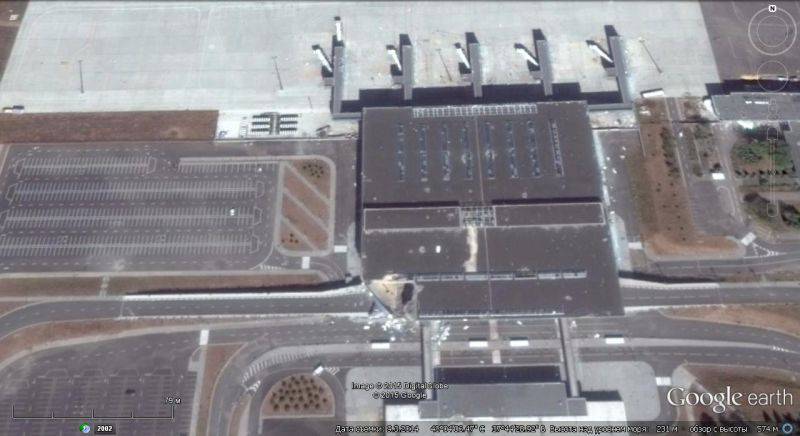 Satellite image of Google Earth: building of a new terminal at the Donetsk airport as of September 2014 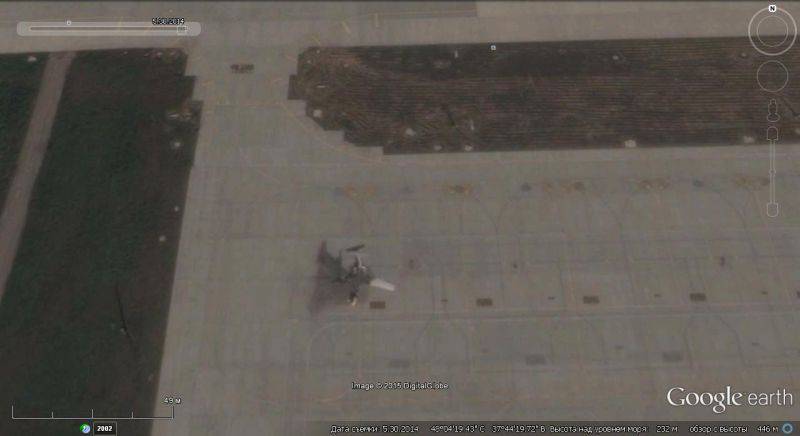 In addition, the DPR and LPR forces destroyed several air traffic control and lighting stations. Thus, in the morning of May 6, 2014, as a result of an attack on a radio engineering unit in the Luhansk region, a radar station was destroyed. The following losses of PTB suffered 21 on June 2014 of the year when, as a result of the shelling, the radar stations of the air defense unit in Avdeevka were destroyed from mortar shells. 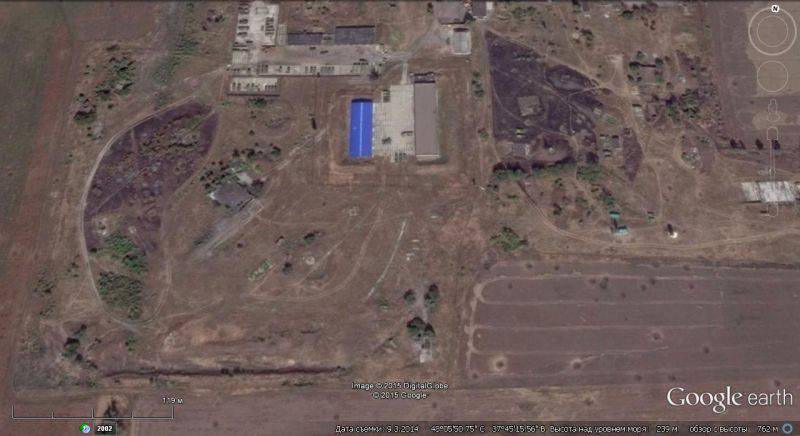 Satellite image of Google Earth: the defeated positions of Ukrainian radar in the Avdiivka area

Air strikes of Ukrainian aviation from the ground were answered with fire from anti-aircraft installations and MANPADS. In addition to reflecting the airstrikes, the military personnel of the DPR and LPR actively prevented the conduct of air reconnaissance and the transfer of Ukrainian military equipment and personnel by air. 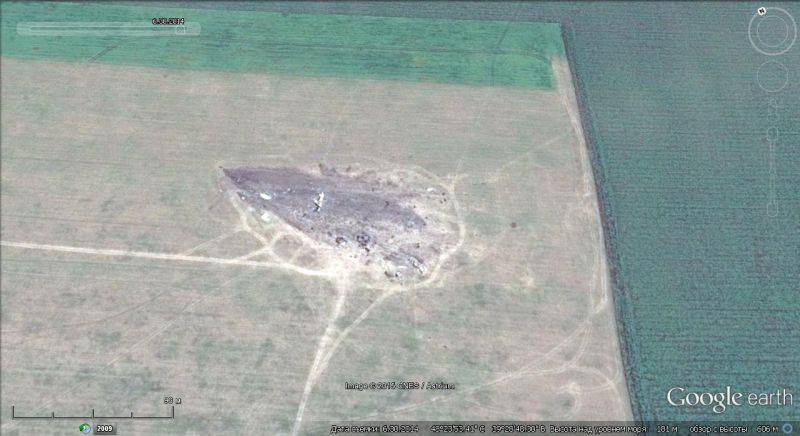 Satellite image of Google Earth: the crash site of the downed Ukrainian IL-76MD

14 June 2014 about 2 hours of the night near Lugansk was shot down by two Ukrainian MTCS Il-76MD missiles with two MANPADS. The plane went at an altitude of about 700 meters without shooting heat traps. On board were 56 people + 10 crew members, 3 BMD-2, battery 120-mm mortars. The plane fell about 5 km east of the runway of the Luhansk airport and 2 km north-west of the village of Krasnoe. All on board were killed.

In total, the Ukrainian air force in the conflict in the east of the country lost more than 20 aircraft, which, combined with the deplorable state of the remaining aircraft, led to the abandonment of the use of aircraft in combat operations. In the future, the Ukrainian military relied on large-caliber artillery and the MLRS, which were actively used to launch attacks on settlements not under the control of the Ukrainian authorities. 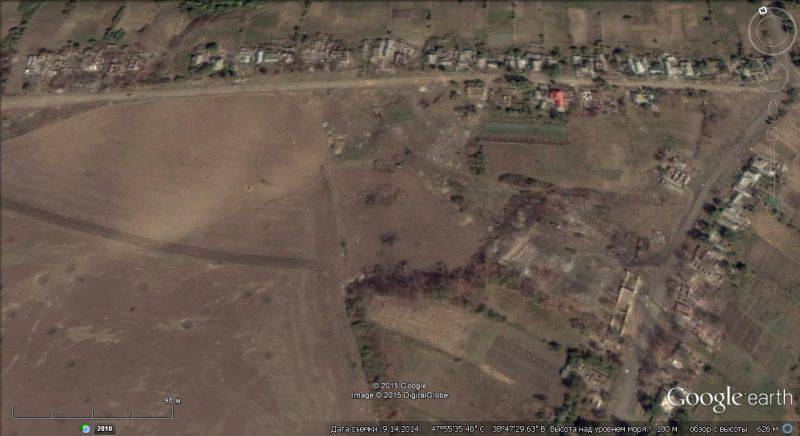 In the middle of June, 2014, fierce fighting began in the area of ​​Saur-Mohyla. The strategic importance of the height is due to the fact that it rises above the adjacent steppe spaces, allowing you to control a large part of the border between Ukraine and Russia. From the top of the mound you can see the territory with a radius of 30-40 kilometers.

During the fighting, the memorial complex dedicated to the Soviet soldiers who died here during the Great Patriotic War was seriously damaged. 10 August collapsed the figure of a soldier, its fragments were scattered. Pylons and bas-reliefs, the obelisk itself, which received a series of through holes, were badly damaged. 21 August obelisk collapsed due to continued shelling.

Repeatedly dominating the height of the terrain passed from hand to hand. Both warring parties suffered serious losses in this area. In July, 2014, during the ongoing blockade of the security forces in the “Izvarainsky boiler” by the DPR fighters, two Su-25 Ukrainian air forces were shot down. 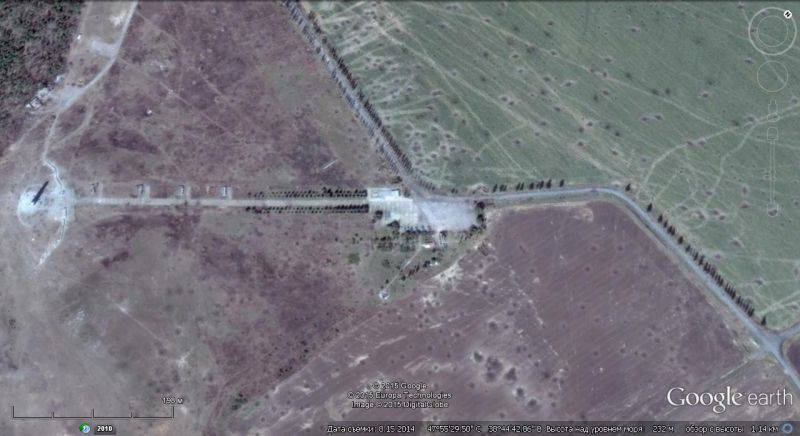 At the end of August 2014, the DPR fighters completely regained control of the area. Ukrainian troops numbering about 4000 people retreated and were surrounded in the "Amvrosievsky boiler". The occupation of the height allowed the DPR troops to reach the Sea of ​​Azov and take control of Novoazovsk with the adjacent 40-kilometer stretch of the Azov coast.

11 July 2014 of the year near the village of Zelenopole (17 kilometers southeast of the city of Rovenky, Lugansk region) from the Grad MLRS, a column of military equipment 79 and EEMBR and 24 and OMBR APU was covered. According to official data from the Kiev authorities, 19 soldiers were killed, 93 was injured of varying degrees of severity, however, according to soldiers of the 79 brigade who survived the impact of the “Grad” strike, there were several times more dead. 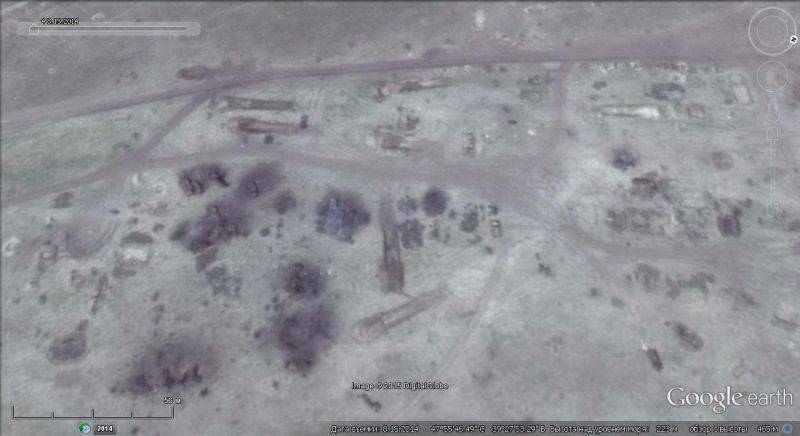 Satellite image of Google Earth: the destroyed Ukrainian technology in the area of ​​Zelenopol

17 July 2014 of the year, near Malaysia Airlines' Boeing-777 passenger airliner of Malaysia Airlines (MAS), crashed a scheduled flight from Amsterdam to Kuala Lumpur near the village of Grabovo, Shakhtyorsky District, Donetsk Region. 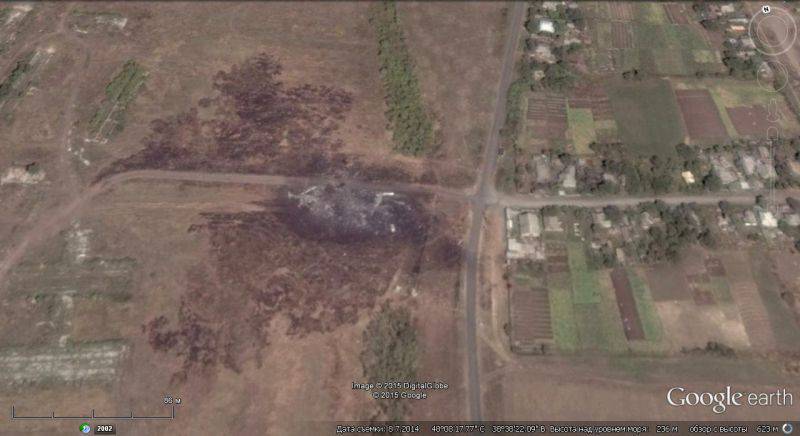 Satellite image of Google Earth: the crash site of Boeing 777 of Malaysia Airlines near Grabovo village

The governments of Ukraine and a number of Western countries were quick to blame Russia for what happened, but no serious evidence of this has yet been provided. Moreover, the investigation into the crash that killed 283 passengers and 15 crew members is delayed.

The civil war in Syria continues. In 2014, in this country there was a significant strengthening of the position of the radical Islamic group "Islamic State", its militants seized several major cities in eastern Syria. Militants are also attacked by military bases and airfields. 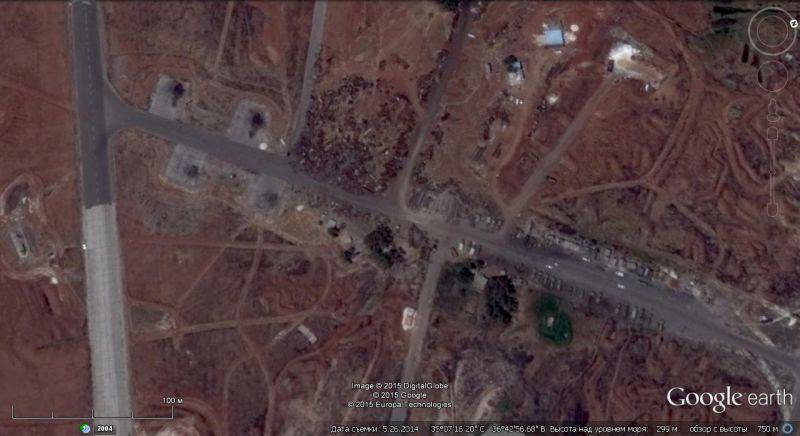 Fighting continues for control of Damascus, Homs and Aleppo. 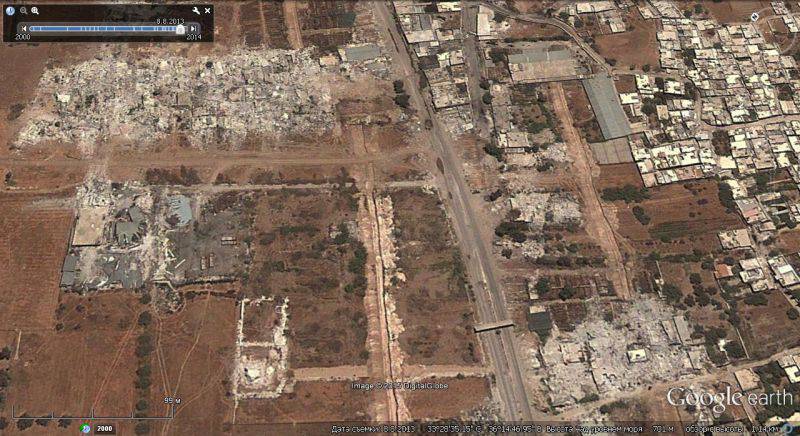 However, the Syrian armed forces do not give up and continue to fight. The Syrian air force, despite the losses, is still effective and continues to restrain the militants, launching bombing and assault attacks on them. 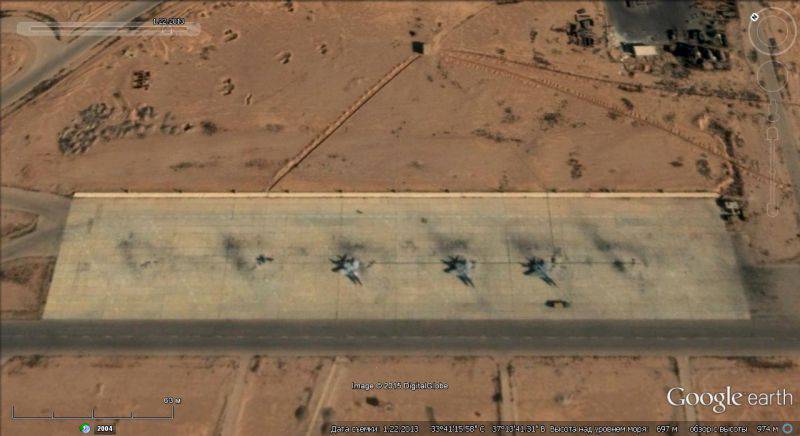 After the overthrow and murder of Muammar Gaddafi in Libya, this country continues to be torn apart by various armed groups. The scene of armed clashes remains the capital Tripoli. The rebels from the Libya Dawn group, who helped to overthrow Muammar Gaddafi in 2011, then seized control of the capital, Tripoli, and expelled the official government from there. As a result, there are actually two governments and two parliaments in Libya - the internationally-recognized government cabinet is in Tobruk, and the Islamist leadership is in Tripoli. Now the groups claiming power in the country are engaged in a fierce struggle for oil resources. 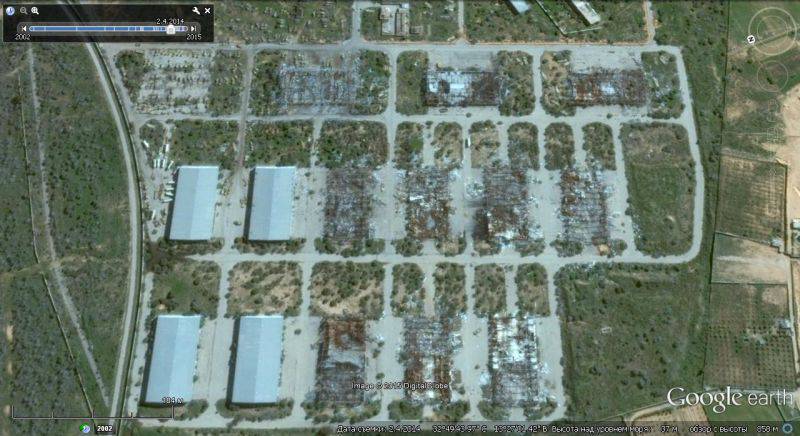 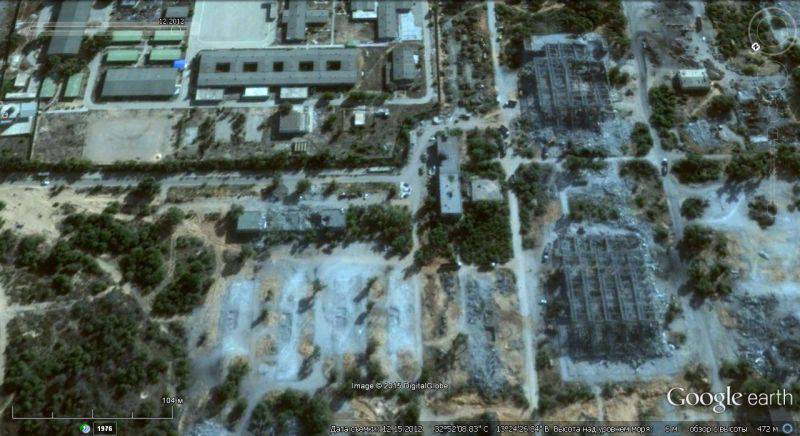 During the fierce fighting for Tripoli airport between the “Zintan brigade” supporting the disgraced general Khalifa Haftar and the Islamist formations trying to discourage the transport hub, several aircraft were destroyed. Also a lot of damage was caused to the transport infrastructure, airport runways were seriously damaged, and containers with aviation fuel were set on fire. 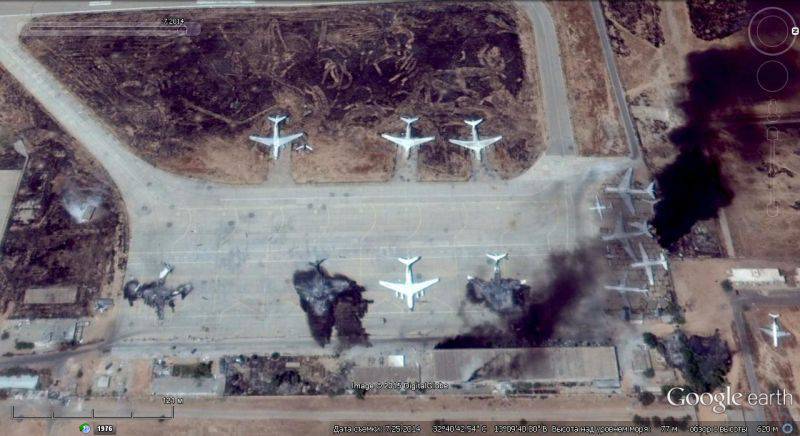 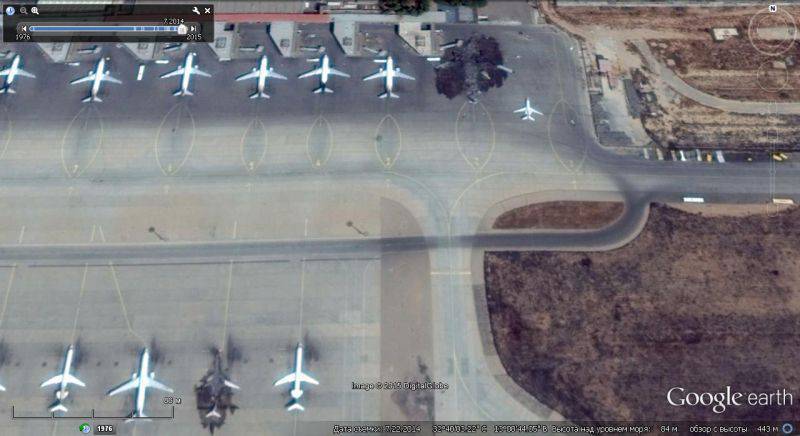 Al-Jufra military airfield in the vicinity of Tripoli is under the control of the Islamic group "Dawn of Libya." Earlier in a number of media reports appeared about attempts to repair and commissioning of the MiG-25 and MiG-23 fighters available at this air base, which is confirmed by satellite imagery. 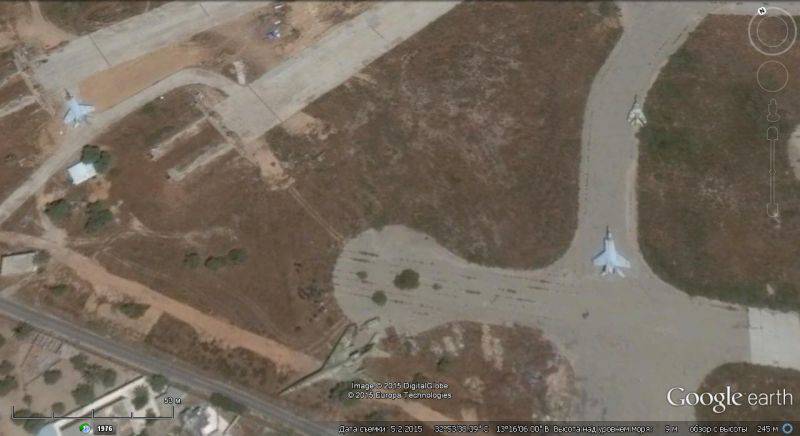 In addition to Tripoli, the fighting does not stop in other parts of Libya. After the Islamists attacked a military base in Benghazi in June 2014, the bodies of more than 80 government troops were found. 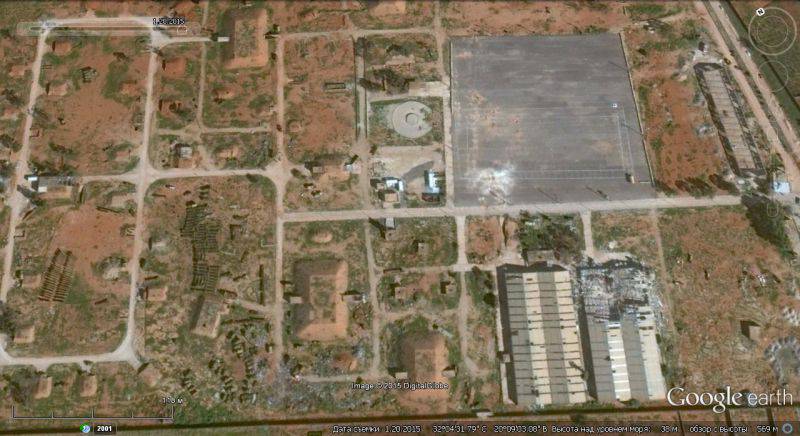 Satellite image of Google Earth: the territory of the military base in Benghazi after the attack of the Islamists

Libyan facilities for the extraction, processing and transportation of oil and oil products are also subject to regular attacks and shelling. 25 December 2014 of the year as a result of a rocket hitting one of the oil tanks at the Es Sidr oil terminal began a violent fire. 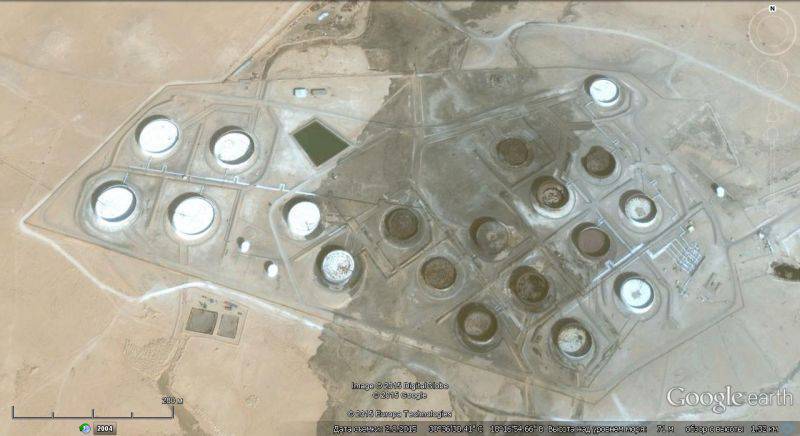 The Libyan government had to conclude a contract for 6 million dollars with an American fire company to help extinguish a fire in an oil terminal in the Libyan port of Es Sidr.

In 2014, the situation in Yemen exacerbated. After the Hussite rebels occupied the presidential palace in Sanaa, Saudi Arabia intervened in a situation trying to prevent Iran from taking positions. In addition to the Saudi Air Force, airplanes from Egypt, Marroko, Jordan, Sudan, Kuwait, the United Arab Emirates, Qatar and Bahrain took part in strikes. 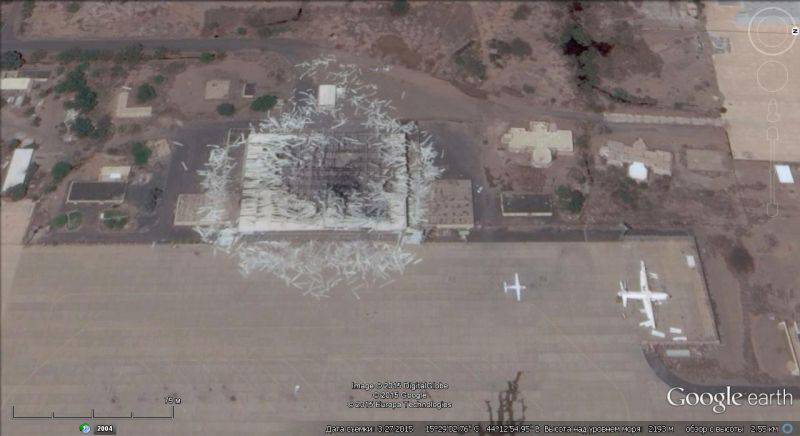 Total Air Force "Arabian coalition" 3125 attacked ground targets. Of these targets, only 137 were military targets. Among civilian objects, 26 industrial enterprises, 31 shopping center, 23 schools, 21 mosque, 9 hospitals, 7 stadiums, 5 power stations were destroyed. The greatest damage was caused to the infrastructure and residential areas. As a result of a direct hit, 480 houses and 51 state institutions were destroyed, the entire 7000 buildings were damaged. The number of killed and wounded among civilians was 4560 people, among military personnel - 368. Damage inflicted on coalition attacks by Yemen exceeds 32 billion.

Based on:
www.spioenkop.blogspot.ru
http://www.bbc.com/russian/international/2014/12/141229_yearender_2014_world_at_war
Satellite images courtesy of Google Earth.

Publication of this series:
Traces of the war on satellite imagery Google Earth