Get away from SWIFT 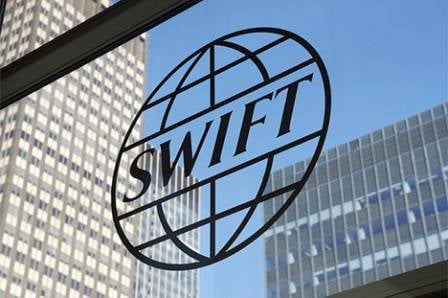 The BRICS countries are consulting on creating a system similar to SWIFT. This was told the other day in an interview with RIA "News»Deputy Foreign Minister, Sherpa of the Russian Federation in BRICS Sergey Ryabkov. Recall that the issue of creating an independent information system arose on the wave of rumors about a possible Russian disconnection from SWIFT due to the likely increase in Western sanctions. Experts doubt that the US and the EU will take this step, but the Bank of Russia is seriously set to discuss the idea of ​​creating an alternative system.


In the interview RIA News" Deputy Foreign Minister Sergei Ryabkov spoke about the prospects for creating a system similar to SWIFT within the framework of BRICS.

When asked by the correspondents “Can the proposals of the Bank of Russia to create a payment system in the framework of BRICS, similar to SWIFT, be discussed at the upcoming BRICS summit in Ufa?”, Comrade Ryabkov answered: “The ministers of finance and the central banks of the BRICS countries discuss the whole a set of issues, including the organization of payment systems, and prospects for the transition to an increasing degree of payments in national currencies. SWIFT is or not SWIFT, in any case we are talking about the possibility of creating a multilateral payment system in a union format that would provide greater independence, or rather, create a certain guarantee for countries from the risks associated with arbitrary decisions in this area that can be made countries in whose jurisdiction the existing payment systems are located. ”

Without a doubt, we’ll add from ourselves, under the “risks associated with arbitrary decisions,” Sergey Ryabkov understands Western prohibitive measures (sanctions) imposed by Washington for political reasons and harm both the Russian economy and its former partners who now prefer to dance to the American tune. .

However, how far did the discussion of the idea of ​​creating an alternative to SWIFT go? Not far yet. “This is all at the initial consultation stage,” Ryabkov says.

As for the US containment policy with regard to BRICS, the corresponding “line” in Washington exists.

“To put it in general terms,” Ryabkov said, “the United States and, probably, the European Union, cannot but feel jealous of such initiatives. They see in them a reflection of the processes that objectively lead to a reduction in the influence of the founding fathers of the Bretton Woods system in the global financial and economic architecture. I expect that as the BRICS Bank becomes established and its practical work begins, criticism of what is being done in this format will intensify. Despite all the declarations that competition in all spheres is welcomed, we are faced with the desire to preserve the monopoly of the historical West on financial and economic levers of influence on what is happening in the world. But the world has changed dramatically in the time since the creation of the IMF, the World Bank, and the European Bank for Reconstruction and Development. The hegemony of these structures is long gone ... "

Recall that SWIFT is an international financial messaging system to which more than ten thousand organizations in 210 countries are currently connected. Every year, 1,8 billion messages are sent through the system. The volume of daily operations is 6 trillion. dollars. In Russia, SWIFT is used by 600 banks and organizations. According to the number of users of SWIFT, the Russian Federation ranks second after the United States.

What can the discussion of the idea of ​​an alternative financial reporting system lead to and can the West really "cut off" Russia from the British SWIFT?

“When anti-Russian sanctions packages were considered in the West, there was a lot of talk that Russia would be disconnected from the SWIFT system, as they did with Iran in the 2012 year,” said "Free Press" Nikita Maslennikov, Head of Finance and Economics, Institute of Contemporary Development. - Such a shutdown is now considered in the forecasts of Russian analysts as a possible measure of increasing sanctions pressure on the Russian Federation. It is logical to have in this case an independent system, duplicating SWIFT. However, as we remember, in the autumn of 2014, SWIFT did not give in to the US pressure, and did not block access to the Russian system. ”

The expert recalled that the business association SWIFT is registered under British law, is in the jurisdiction of the United Kingdom, has its headquarters in the suburbs of Brussels. SWIFT is not a payment system, but informational. "For banks, losing access to SWIFT is like having a modern person left without a smartphone and tablet, alone with a traditional home phone."

Decisions in SWIFT, the source’s interlocutor clarified, are made by the main actors in a consensus. The main people around 150, and put pressure on the leadership of the business association "are difficult even for the US government."

The West at one time disconnected Iran from the system, but there was a UN Security Council resolution, which was joined by SWIFT. In the case of Russia, such a shutdown scheme is impossible, the expert believes. After all, the Russian Federation is a member of the UN Security Council with the right of veto.

Nevertheless, some risks remain - for example, the risks of disconnection from SWIFT of individual Russian banks. This can happen if the EU and the USA include these banks in the sanction lists and then require SWIFT to stop servicing them.

The existing risks, the expert noted, are pushing Russia to create a “duplicate” of the system. The bank electronic payment system (BESP), Maslennikov recalled, “has already acquired real contours and is more or less successfully functioning”. The mentioned BESP is an element of the future financial space in the Eurasian Economic Union. “And now the idea has arisen to create a similar system for BRICS,” continued the specialist. - Moreover, in July 2014, at the BRICS summit in Brazil, an agreement was signed on the creation of the New Development Bank of the BRICS countries, as well as an agreement that provides for the mutual opening of credit lines in national currencies by the BRICS central banks to each other. As a result, BRICS has a purely technological need for a SWIFT analog. ”

Maslennikov noted that SWIFT works mainly with key currencies, primarily with the US dollar (its share in payments made through the system is about 68%). But the yuan is a bit more than 2% in SWIFT operations, and the ruble is even less - 1,7%.

“It can be said that SWIFT has certain problems in working with the Indian rupee, the Brazilian real, the South African rand,” the expert drew a line. “If so, it makes sense to create an additional system that would be confined to the decisions of the Central Banks of the BRICS countries, to finance the projects of the New Development Bank, and, if necessary, to duplicate SWIFT.”

The expert assigns seven to eight years for the implementation of the SWIFT analogue.

So, to add in conclusion, the idea of ​​creating an analogue of the British system of informational messages has a number of reasons: first, the Western political component, which contains risks for a SWIFT participant, which at any moment may be either under full or partial sanctions; secondly, the time of the old key currencies is gradually leaving, and the world needs a new system that would fully work with various monetary units, starting with the ruble and the yuan and ending with the Brazilian real and the South African rand.

Observed and commented on Oleg Chuvakin
- especially for topwar.ru
Ctrl Enter
Noticed a mistake Highlight text and press. Ctrl + Enter
We are
Russian banks began to connect to the National Payment Card SystemBRICS: friendship against the dollar
47 comments
Information
Dear reader, to leave comments on the publication, you must to register.