October 24 2011
9
Passes for enemy soldiers are the most popular type of flyers during any war. The circulation of such leaflets envy any writer. For their delivery to the addressees, special aerial bombs, artillery shells and even mortar rounds are being developed.


German passes in captivity for Soviet soldiers since World War II are widely known. But our agitprop did not remain in debt. In the initial period of the war, the Soviet passes “did not work” - the Germans attacked on all fronts, and even appeals to class consciousness, calls to turn weapon they were not perceived against the exploiters by the Germans, who considered themselves to be representatives of a certain people, and not of a certain social class. But our propagandists knew how to learn from their mistakes. And after the first defeats of the Wehrmacht, the “passes” were finally earned. We offer you a small selection of Soviet leaflets little-known today for German soldiers. 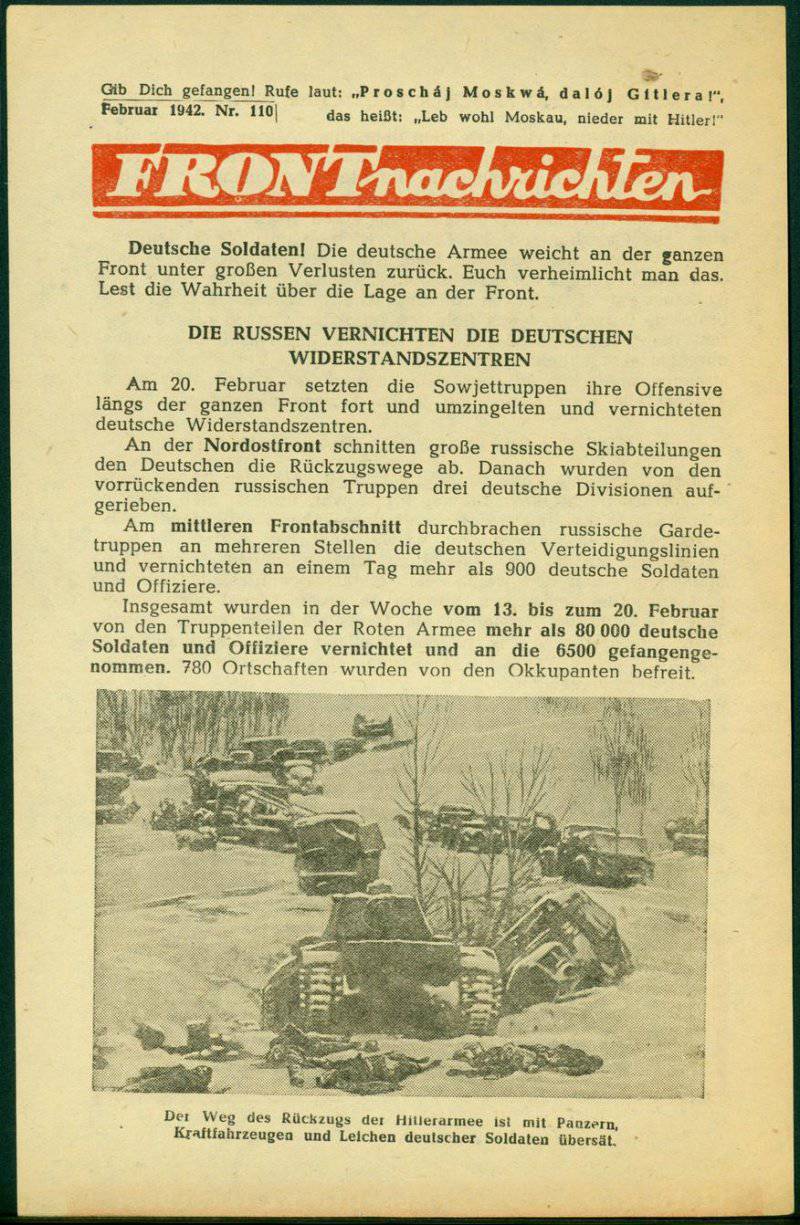 German soldiers are informed about the winter defeat of the Wehrmacht near Moscow. On the reverse side of the standard "pass captured." Curious is the password in Russian, which must be shouted by the Germans, who have decided to surrender: “Goodbye Moscow! Down with Hitler! ” 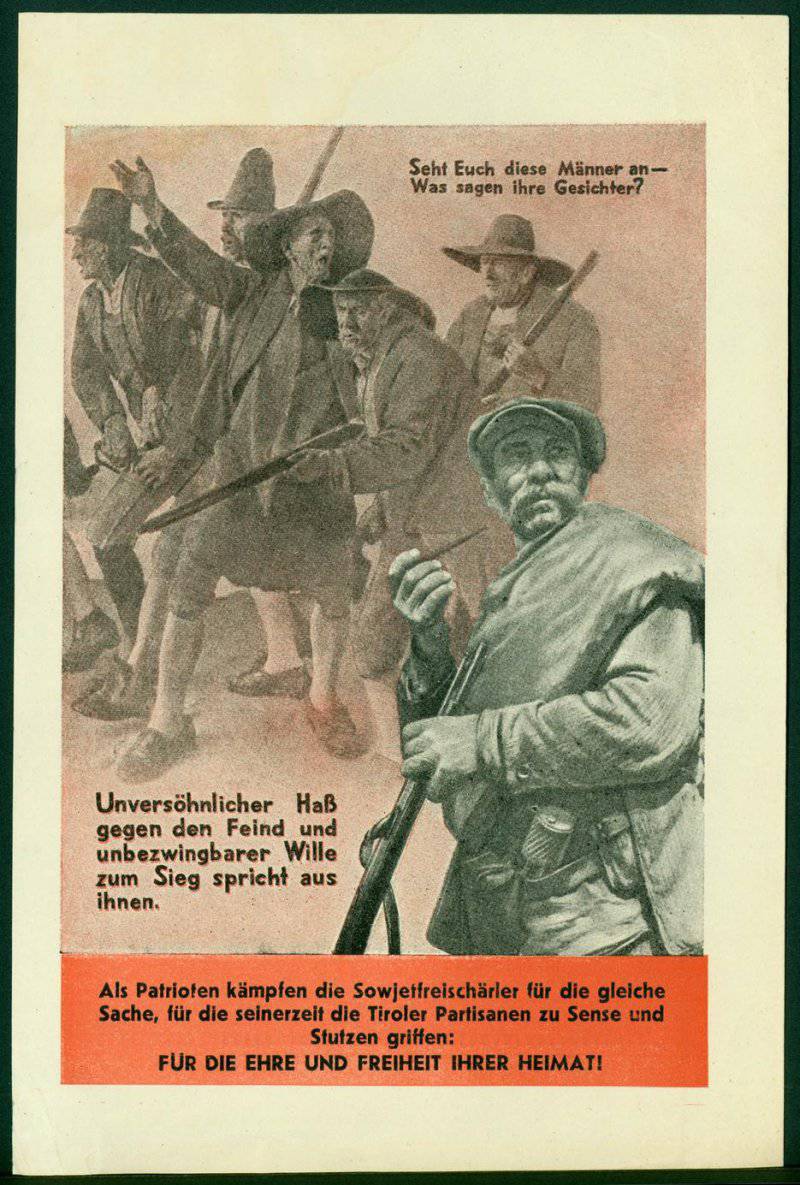 On the leaflet in the background are the Tyrolean partisans of the Napoleonic wars. In the foreground - the Soviet partisans. The text reads: “What do you say, looking at their faces? Soviet peasants are doing the same thing - fighting for the honor and freedom of their homeland. " 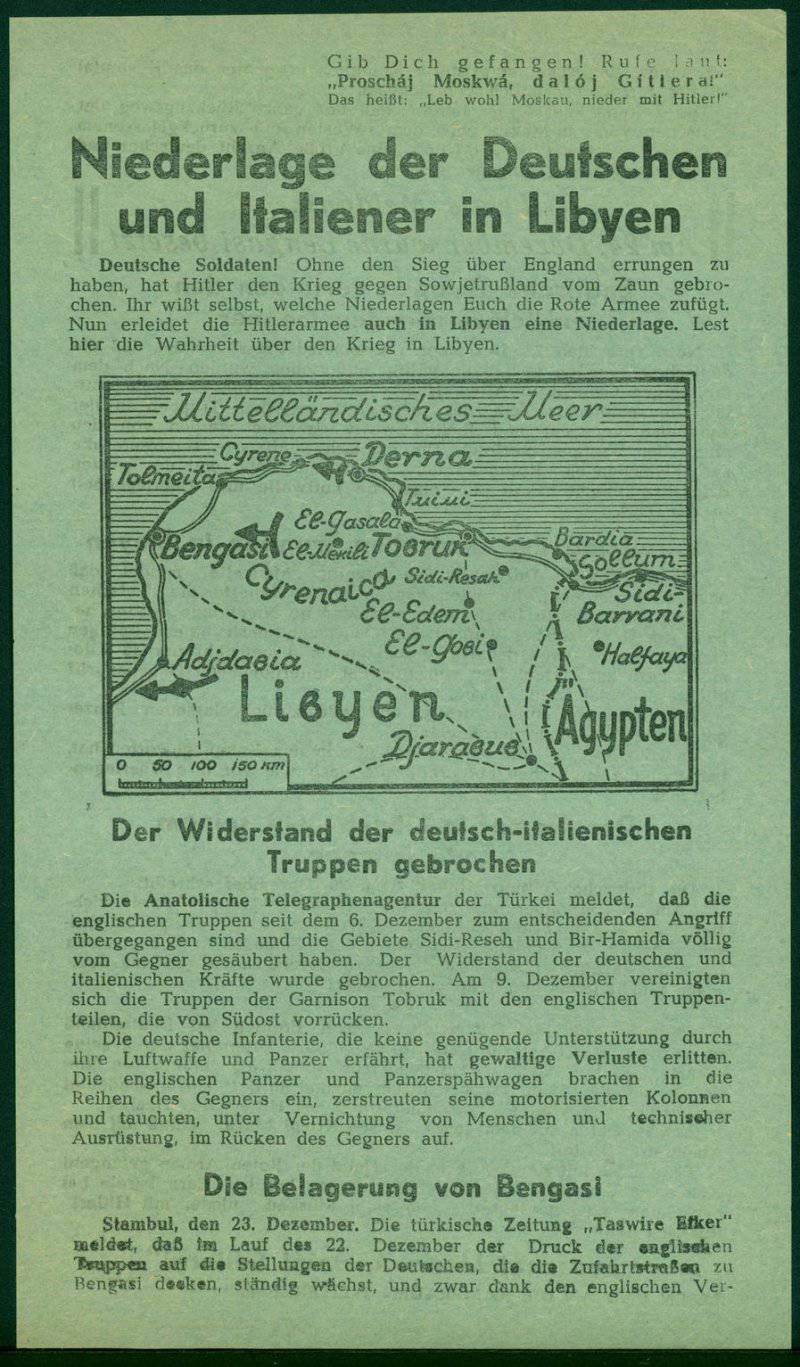 And this Soviet leaflet tells German soldiers on the Eastern Front that their comrades suffered a crushing defeat in Libya. A map of the theater of operations, a detailed account of what happened at this theater. On the back side of the leaflet is a statement of the fact that a war on two fronts will not lead to anything good Germany and a call to surrender. 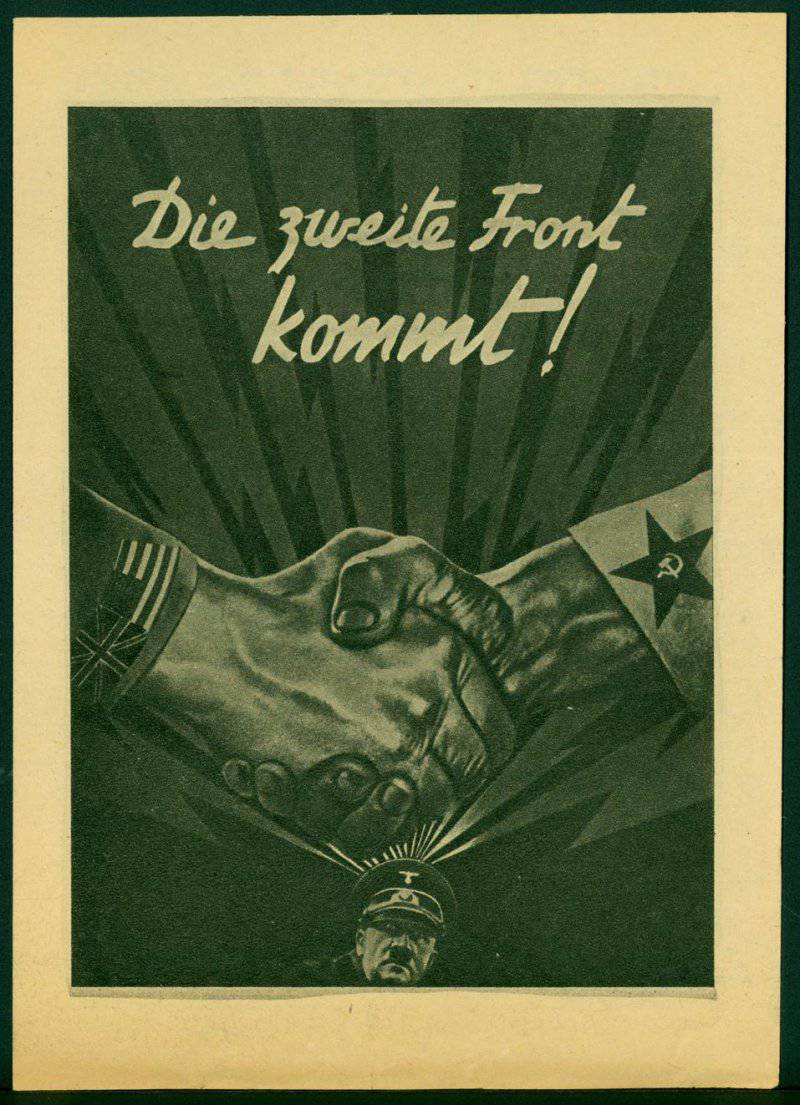 And this leaflet informs German soldiers about the imminent opening of a second front. 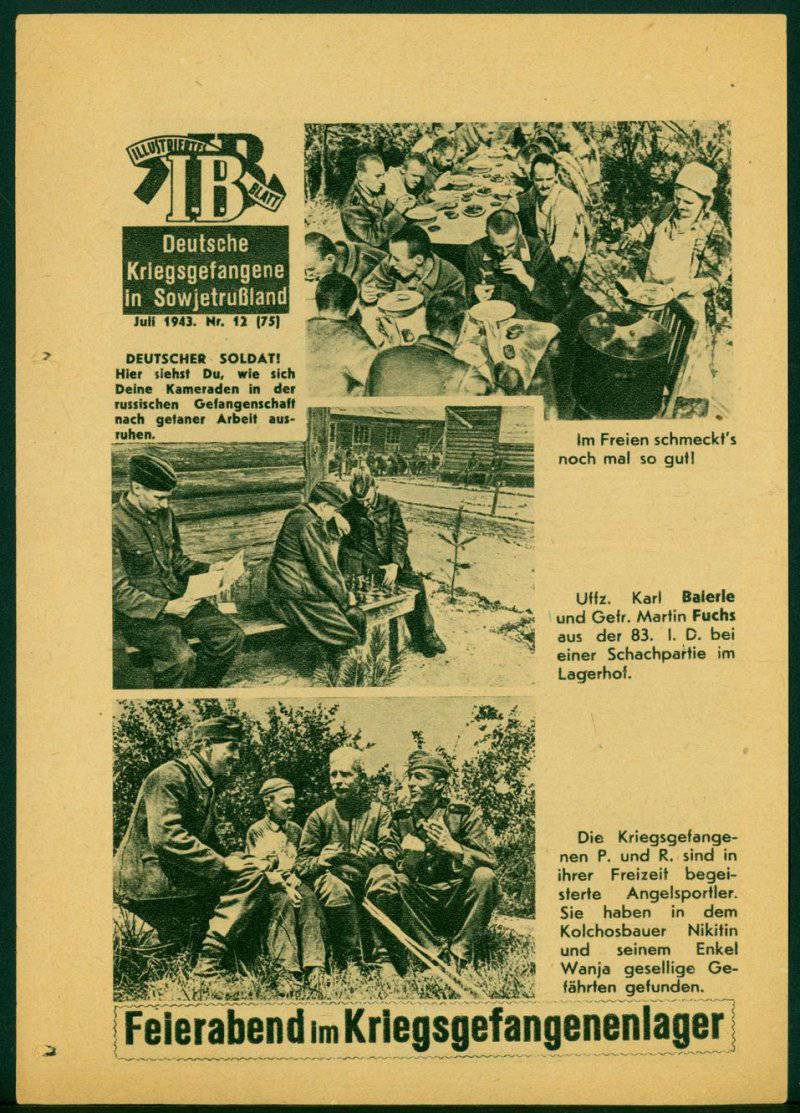 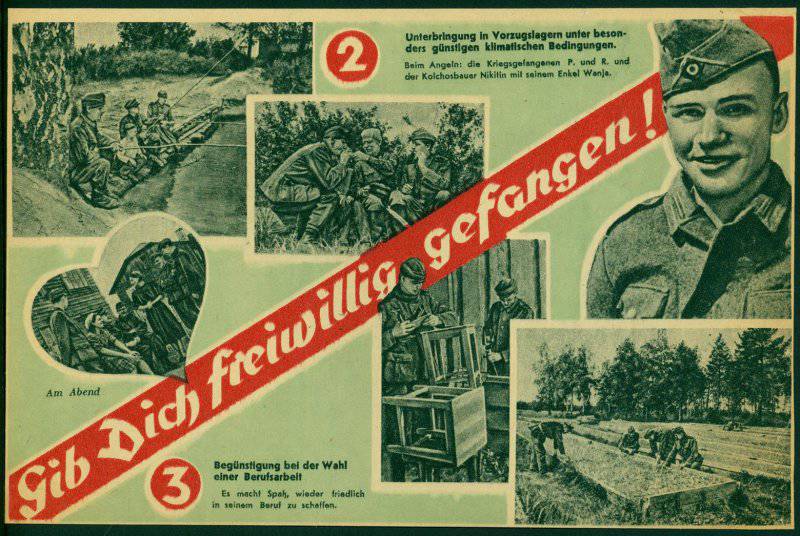 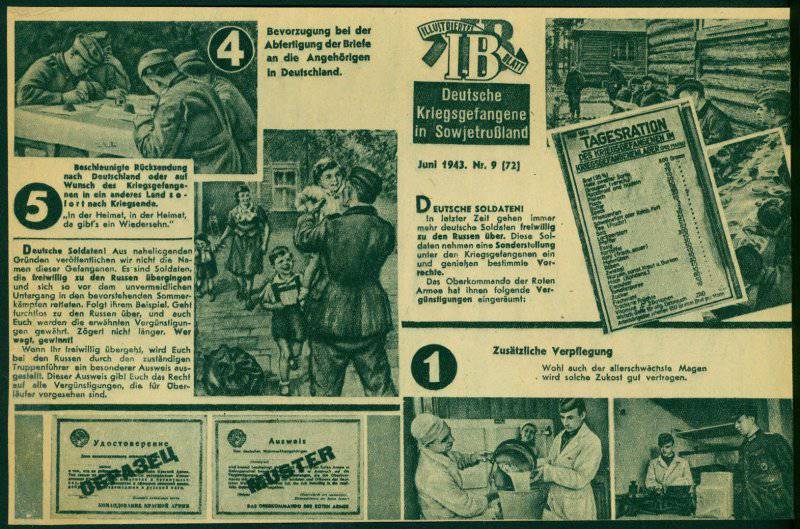 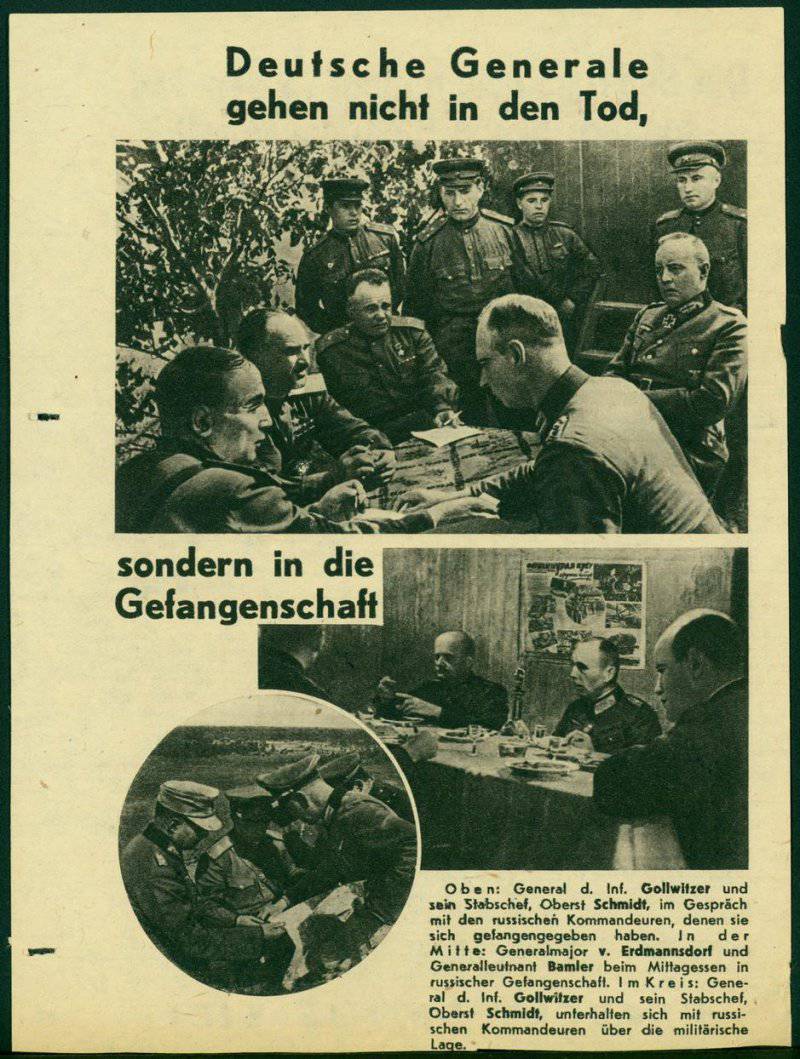 “The generals do not die, they surrender. Do the same. ” Comments are superfluous - it sounds convincing. 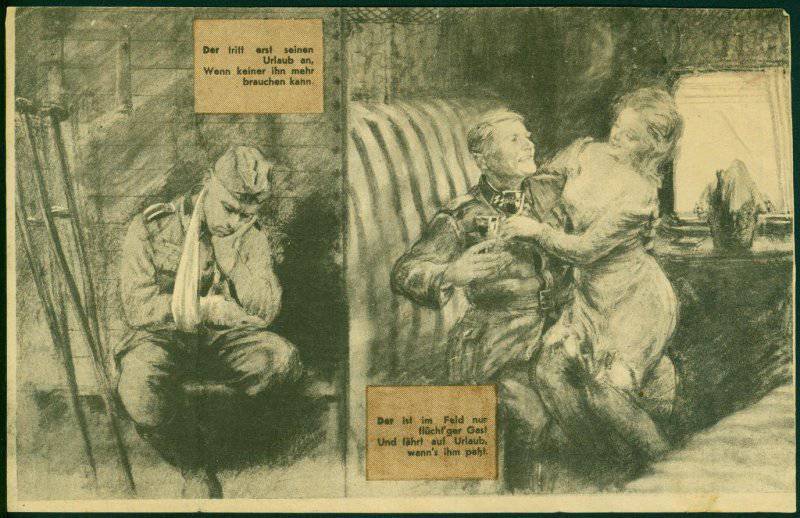 The SS man's wife is wounded by a wounded soldier in the rear. Attempt to embroil the Wehrmacht and the Waffen SS. 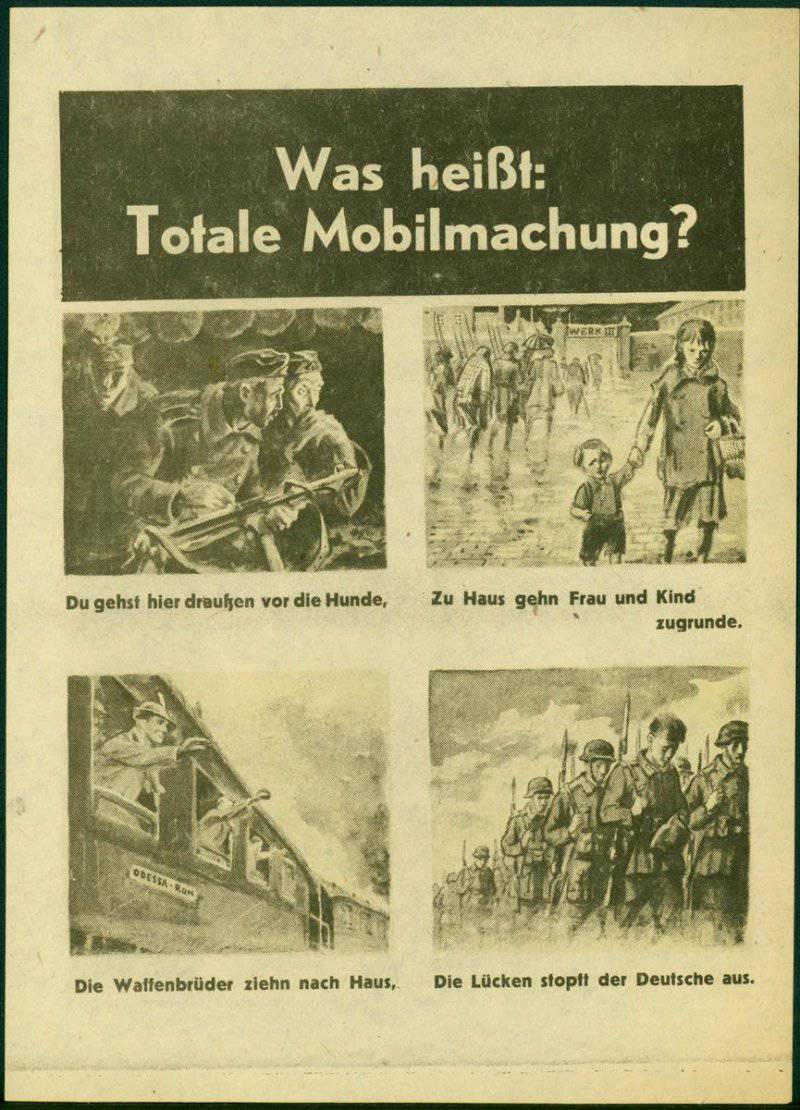 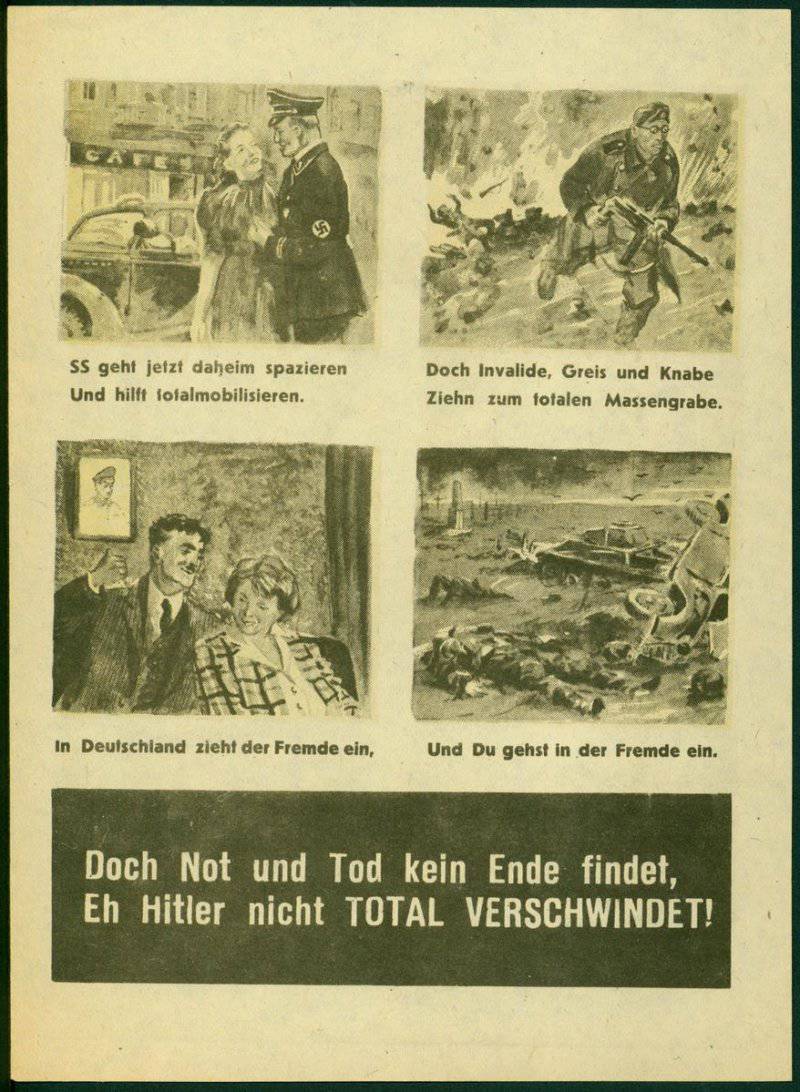 This leaflet tells the Germans what is happening in their rear — total mobilization, the Italian allies went home, and the Germans at the front plugged all the holes. 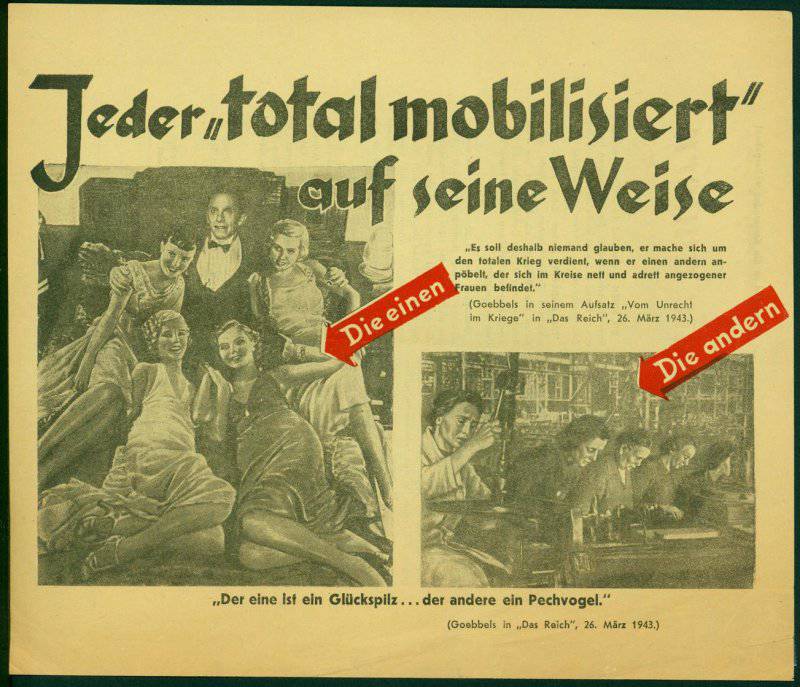 “That's what“ total mobilization is. ”Goebbels is having fun with girls, and older women are sent as slaves to factories.” (Although instead of older German women, slaves who were hijacked from the occupied countries worked in Germany’s factories, using slave labor allowed the Germans to carry out total mobilization ). 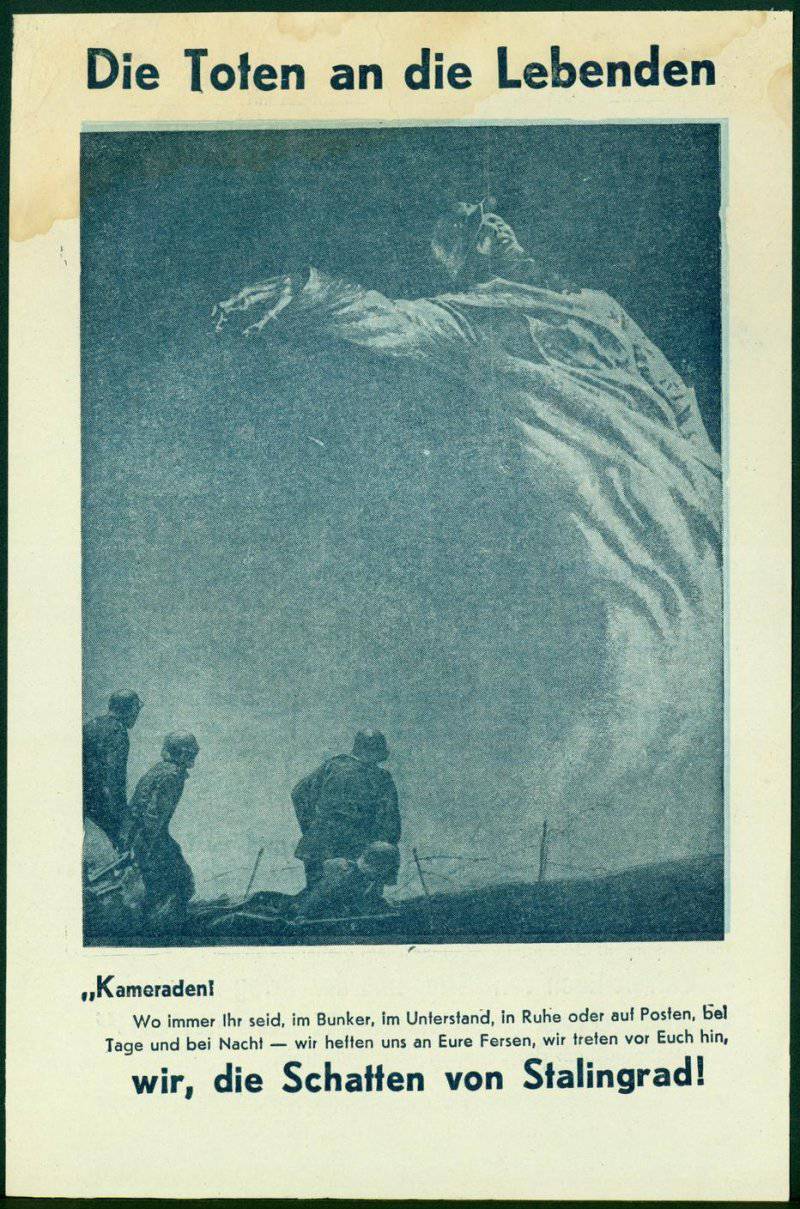 “The dead are turning to the living. Comrades, wherever you are - in a trench, in a dugout, on duty, we will follow you relentlessly - the shadows of Stalingrad. ” 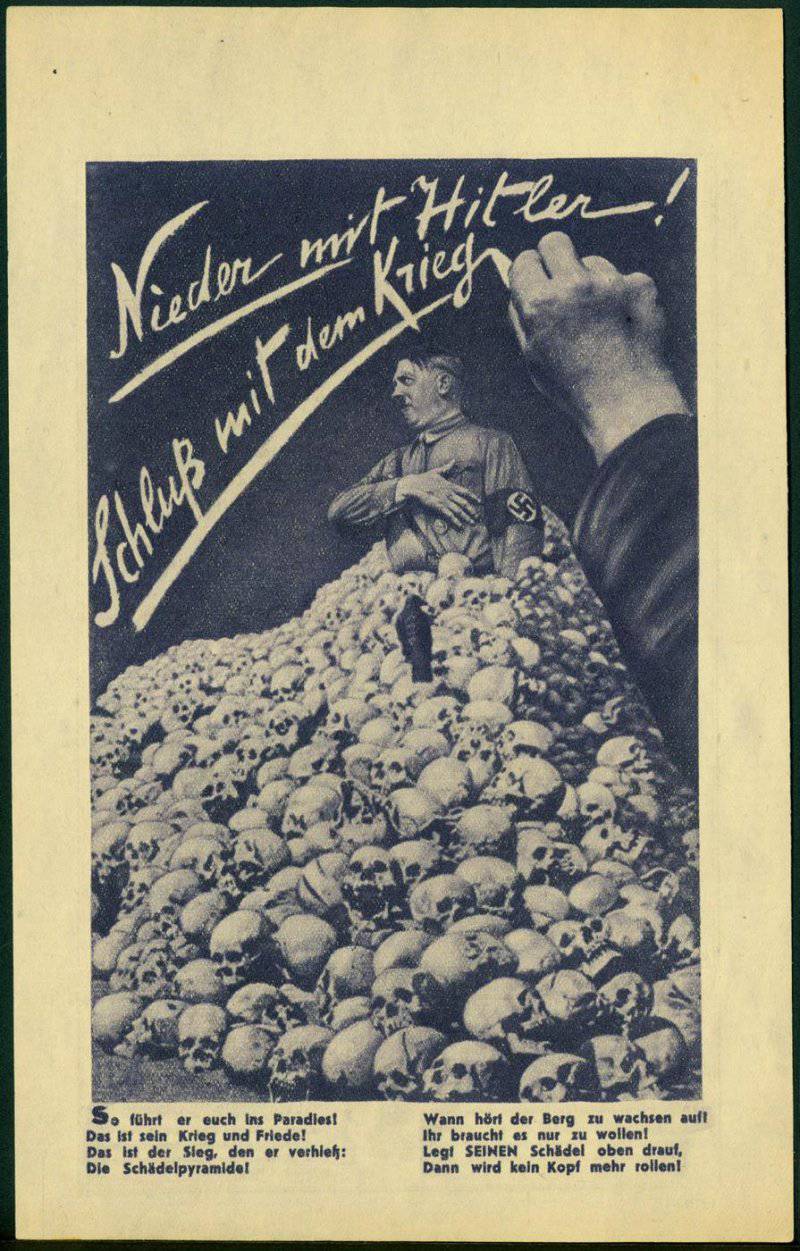 "With Hitler, war will never end." 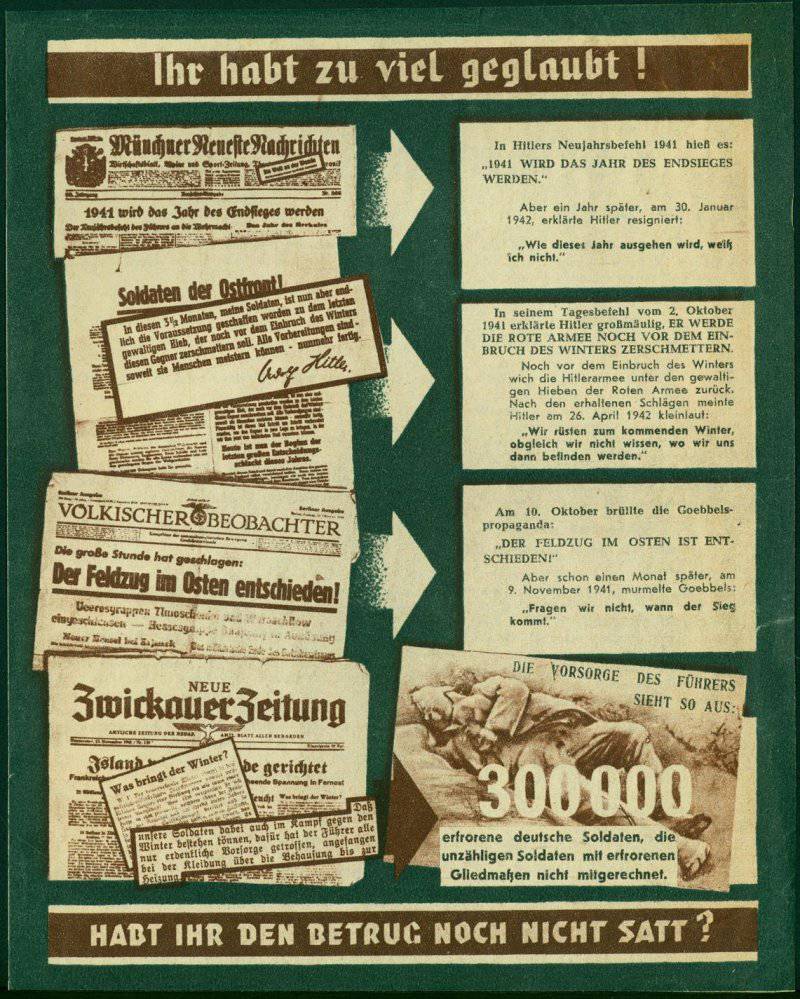 “You are too trusting (there is a selection of boastful headlines from the German press). Do you understand that this is a hoax? ”

It is difficult to calculate how many lives of Soviet soldiers saved these leaflets for the Germans. But the fact that our propagandists have contributed to the victory, no doubt.
Ctrl Enter

We are in Yandex Zen
20 obscure AK-47 variants
A selection of photos of the Great Patriotic
9 comments
Information
Dear reader, to leave comments on the publication, you must to register.