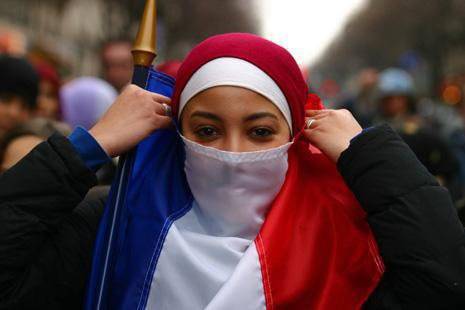 Observing the processes of active Islamization of modern Europe, it can be concluded that the situation is somewhat similar to what was already on European lands in the eighth century of the new era. Then the Moorish-Arab army, having crossed the Strait of Gibraltar, began the systematic seizure of the Iberian Peninsula. For two decades, the Muslim armies seized the territory in which Portugal and Spain are now located.

In our time, Europe is undergoing, so to speak, a relatively peaceful takeover. However, the more representatives of Muslim states appear in Germany, Switzerland, Great Britain, France and other European states, the more often peaceful coexistence turns into a real “war with the infidels”. Waves of violence and arbitrariness can sweep the streets of European cities, allegedly because the rights of Muslims on this continent are brazenly infringed. It even goes so far as some Muslim communities openly oppose the state symbols of the countries in which they now live. This happened in Switzerland, where a group of Muslim lawyers criticized the Swiss flag. Ivica Petrusic, vice president of the immigrant association, said that the white cross on the Swiss flag is contrary to the current principles of multiculturalism of this state. He (cross), allegedly, even insults the honor and dignity of the four hundred thousand Muslims who currently live in this alpine country. Other representatives of Muslim communities say that it is worth “holding” on the Swiss national flag a symbol in which the majority of citizens of this state do not believe. In other words, the “new Swiss” are questioning the principles of national identity and the confessional community of the country's indigenous population.

Against the background of such statements and projects, for obvious reasons, right-wing radical organizations are activating in Europe that wish to give an adequate response to immigrant communities. It is worth noting that while in most European countries the right behaves quite calmly, however, the patience of the native Europeans is not at all iron, and the situation may go beyond the controlled one. Let's not forget that in some regions of the "old woman" -Europe such cases have already occurred. Recall at least the case of execution on the island of Utoya, which perpetrated the radical Norwegian citizen Breivik. 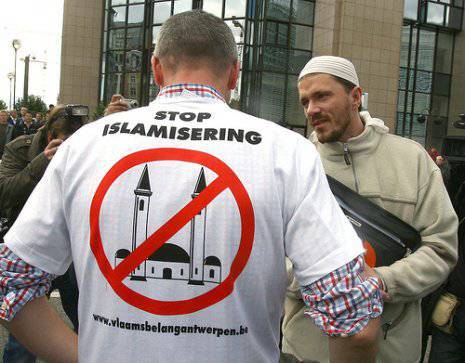 The situation is complicated by the fact that the European authorities do not fully understand what decision to take in this situation. On the one hand, the interests of the indigenous majority, on the other hand, the need to observe democratic procedures, according to which everyone has the right to speak freely and to act practically freely. Many European governments have already formed a fairly strong Islamic lobby, which supports the entry of cheap labor from Tunisia, Yemen, Pakistan, or Libya destroyed by the war into these countries. Cheap labor can make it possible in large quantities to realize what companies controlled by these government forces produce, destroying one of the main gains of Europe - free competition.

It turns out that in the near future we can expect that in some places in Europe even the coming to power of people who defend the position of immigrants themselves is possible. In this case, a change of national symbols may seem like an innocent childish prank, because these people are capable of both changing the constitution and openly restricting the rights and freedoms of the indigenous people of Switzerland. And if so, then the right movement can receive additional support in Europe, which will lead to a kind of restoration of the very reconquest of the 8 century, when the Christian peoples of Europe had to rally to liberate the Pyrenees from Arabs and Moors.

By the way, in those old times in Europe there were enough indigenous people (from among Christians) who supported the expansion from the Muslim world. Surprisingly, among such "sympathizers" of the Moors and Arabs there were even high-ranking church officials. This is explained by the fact that the abbots received substantial financial support from the Muslims so that they “enlighten” the Europeans, that the Islamization of Europe is not so negative. Everything is exactly as it is now. Only instead of abbot government ministers.

It turns out that the day is not far off when a cohesive European nation will cease to look at democratic principles and take up the restoration of its own self-identity. But this would not have been possible if immigrants were respectful of the laws and symbols that had passed the path of national recognition for a single century. Modern Muslim immigrants in Europe are trying to "come to a strange monastery with its charter."