KRISS introduced the second generation of its Vector weapon complex.

9 2015 June
45
The American-made Kriss Vector submachine gun is designed to arm police and military personnel. The first prototypes of this small weapons appeared in 2004 year. And their mass production of the American company Transformational Defense Industries, Inc. (TDI), which was later renamed KRISS USA Inc, took over the 2009 year. In addition to police and military samples, models for the market of civilian weapons are also being produced - a self-loading carbine and pistol, which are based on the Kriss Vector submachine gun. To arm the representatives of various security structures, a self-loading carbine with a short barrel was created and is being produced.


If you have ever seen this submachine gun, you will never confuse it with any other small arms in the world. Unusual, even futuristic design of this weapon would be well suited for organizing filming in almost any fantastic picture. At the same time, it is distinguished not only by its unusual appearance. Its internal structure also has little in common with traditional gun pistols and personifies the triumph of high technology. 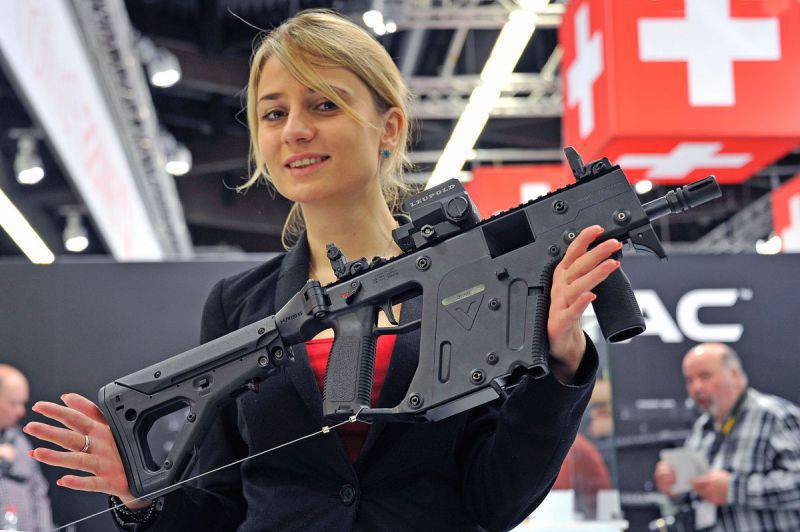 The main feature of the Kriss Vector submachine gun is the unusual pattern of its automation. In the traditional layout models, the shutter moves back and forth in the horizontal plane at the moment of firing. When a shot is made, the shutter rolls back after which, striking the receiver, passes the impact energy to the shooter’s shoulder through the butt. This process is called recoil. The recoil of the weapon with its pushes causes the shooter to involuntarily change the position of his body, which in turn knocks down the sight, lifts the barrel of the weapon and causes the shooter to spend time and effort on returning the weapon to the aiming line. In the burst shooting mode, the shooter’s efforts to hold the weapon are usually insufficient, and each next bullet in the released queue goes higher than the previous one. That is, starting from a certain moment, the bullets just start to go above the target, as they say, fly “into the milk”.

However, in the Criss company machine gun, the bolt was constructed differently than on other samples of such weapons. The shutter itself is made very light and with the help of its protrusions it is connected to the guide groove of the massive spring-loaded balance bar. At the time of the shot, when the shutter begins to move backwards, the balance weight associated with the shutter is lowered along its own guides into a specially made inclined-vertical shaft, which is located behind the shop. At the same time, he partially leads the back part of the shutter connected to it. 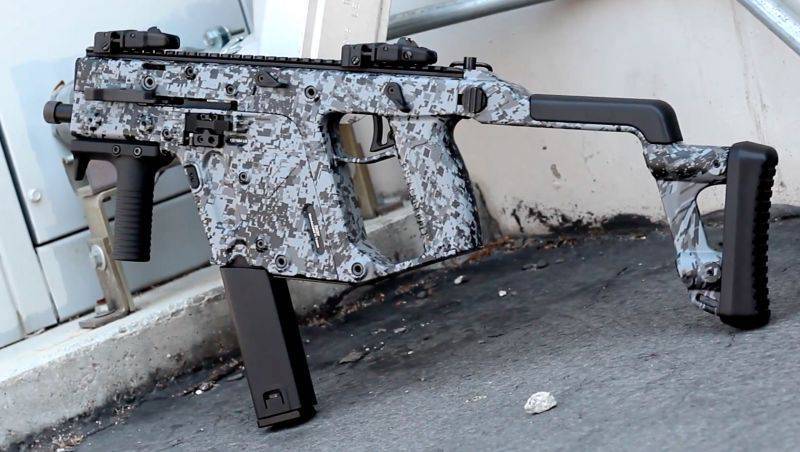 The implementation in the weapon of such an offset allows you to redirect the total vector of the action of the recoil force from the horizontal plane (as on most models) to the vertical plane. For this reason, the blow from moving parts does not go back, as in ordinary samples of submachine guns, but back and down, which, according to the developers, should somewhat compensate for the effect of bursting the barrel when firing in bursts and contribute to achieving heap and more controlled firing. In addition, the fire control handle is not under (like on ordinary submachine guns), but practically in line with the barrel, should also prevent the barrel from being raised upwards.

Since 2007, the international group of companies for the first time showed its submachine gun "Vector SMG" caliber .45 ACP, many years have passed. But its innovative design and futuristic appearance still haunt many people, turning the weapon into a real icon, which personifies the achievements of the military industry of the beginning of the XXI century. However, the designers of the KRISS Group do not stop there. Since then, they have expanded their product line with two self-loading civilian carbines (short and long barrels), as well as a large self-loading pistol with a barrel of the same length as the barrel of a no-rifle pistol (5,5 inches). 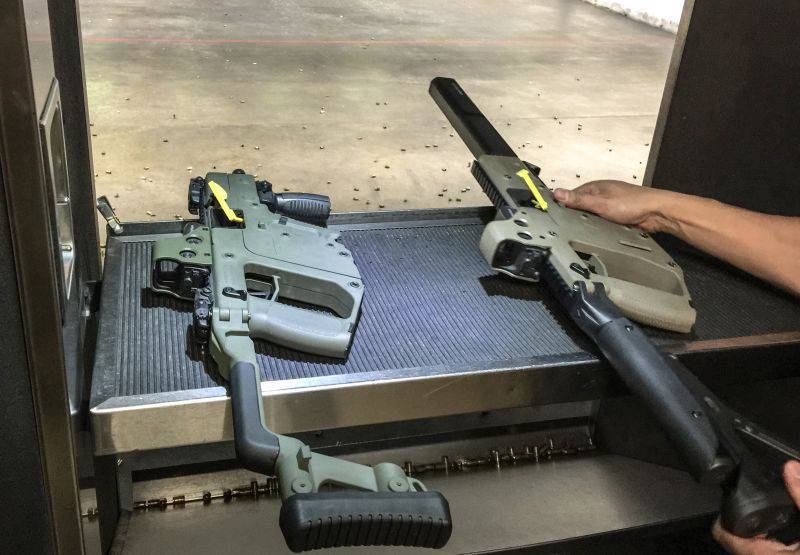 In this case, all models under the brand "Vector" standard shooting from a closed shutter. This weapon is distinguished by the patented “Super V Recoil Mitigation System” recoil energy redistribution scheme, which is based on a spring-inertia mechanism located in a large “pocket” at the bottom of the receiver behind the magazine of a submachine gun. This system reduces the muzzle throw and softens recoil. The result of the introduction of the system, whose mechanism of operation was described above, was that the Vector SMG submachine gun continues to be a fully controlled weapon even when firing at 1200 speed / min. Even more effective is on self-loading versions. Due to this technical solution, to conduct a fast and accurate fire in a state even less experienced arrows.

In 2015, as part of the IWAOutdoorClassics 2015 exhibition, which was held in Nuremberg, Germany, KRISS International presented to the public a renewed set of weapons labeled “Vector Gen.2”. The company showed a line of large-sized pistols, self-loading carbines and submachine guns, which were modified to become even more convenient and practical not only for the military, but also for civilian shooters. It is reported that already this year all versions of the original KRISS "Vector" small arms complex will be available in the performance of "Gen.2".

The second generation of this small arms will be presented with models equipped with an adjustable telescopic butt, which will replace the original side-folding butt. This will allow any type M4 butt on the weapon to be installed regardless of the make of the model, making it easier for users to get used to rifles and carbines based on AR-15. 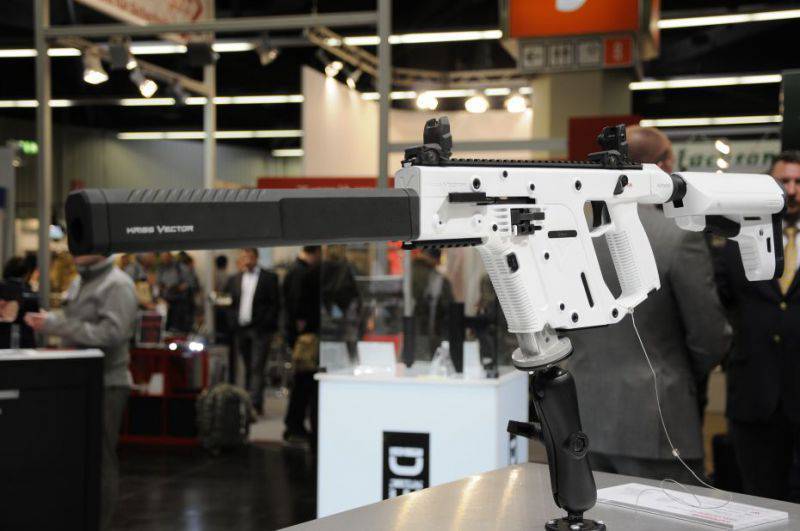 In addition, the long-barreled self-loading civilian carbine CRB / SO was presented at the exhibition with a new square casing, which is located around its 16-inch barrel, which makes the appearance of the weapon even more aggressive and futuristic. It is also reported that all models of the second generation will be available to users with a fully folding MagPul MBUS factory, which is mounted on the Picatinny top level MIL-STD-1913.

It is also known that all the controls on the models of firearms of the KRISS "Vector Gen.2" family of firearms will be completely symmetrical, and the lower and upper parts of the receiver in each model will be fastened together with four contacts, which will allow users to carry out their maintenance or complete cleaning without use of special tools. It is worth noting that, until recently, all submachine guns, self-loading carbines and KRISS “Vector” pistols were available to users only for one cartridge - .45 ACP with a Glock 21 magazine on 13 cartridges, the capacity of which was increased to 25 cartridges through the use of regular the KRISS MagEx store extender. In addition, the new KRISS firearm "Vector Gen.2" will receive a cartridge 9x19mm Parabellum, these cartridges will be powered using Glock 17 and Glock 18 magazines, designed for 17 and 33 cartridge, respectively.