What is the future of tanks?

October 15 2011
5
When the socialist bloc of European states began to collapse, NATO felt that now there would be no major war and the reduction of ground weapons could begin. With the collapse of the Soviet Union in Western Europe, proposals for an even stronger reduction in troops began to sound. They say that now there are no aggressors left at all, so that the armored vehicles, artillery, etc. can be sent to warehouses or remelted. And in the troops leave a little, as they say, for seed. 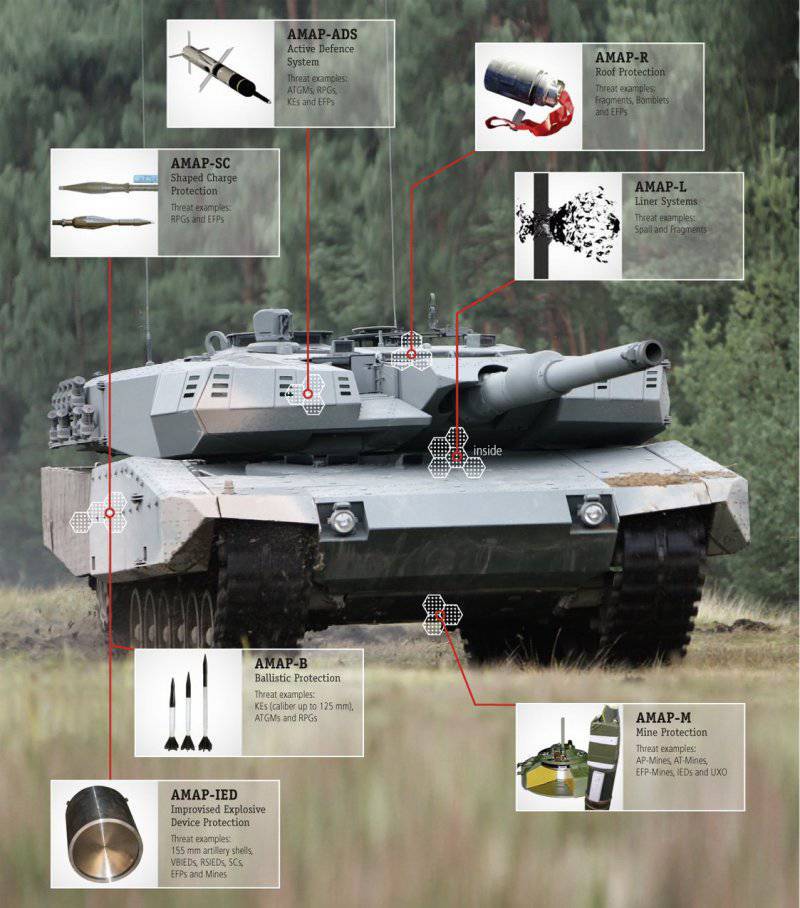 As a result of these cuts - slowing down the work on improving the old technology and creating a new one. In political science, in turn, the theory has spread that the main battle tank in the current war is not needed at all. But such voices began to sound quieter after the wars in the Balkans in the 90's. After the NATO operation in Iraq, they fell silent altogether. The practice has once again proved that the main battle tank has both sufficient armament for most operations and protection that is in many respects appropriate to the situation.

Another reason not to remove from the army Tanks - sluggish local conflicts. The Cold War may have ended, but there was no final peace on the planet. Confrontation of Korea, Greece and Turkey, China and Taiwan, African conflicts, etc. no one has yet canceled. Both countries of the Korean Peninsula are buying new and upgrading old tanks, China is making its own designs. Even Greece is on the verge of a global crisis (I hope everyone remembers what is going on with its economy?) In 2008, nevertheless decided to buy Leopard 2A6 tanks from Germany. The "best friends" of the Greeks are Turks, now together with South Korea they make the Altay tank, and are going to take it into service in the next 5-7 years. 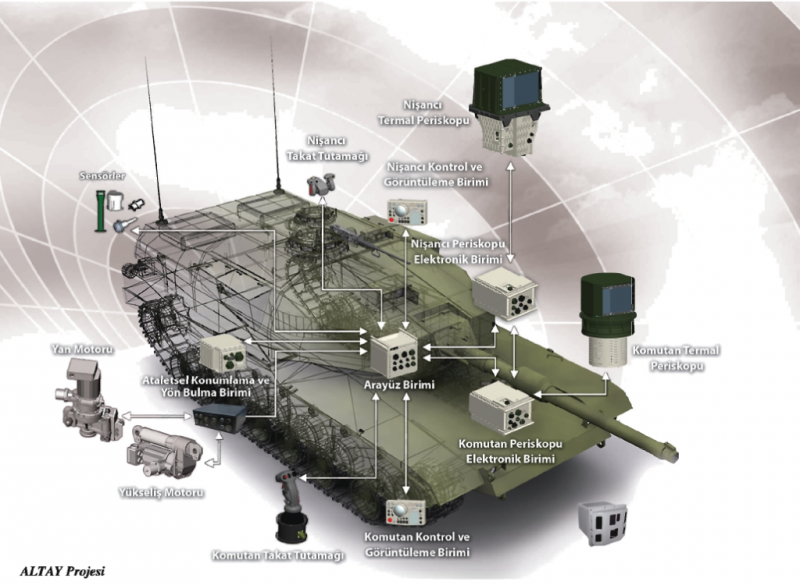 In general, the military do not agree with the uselessness of tanks and confirm their opinion with financing. Designers-tank builders, in turn, work in three main areas: the development of completely new medium and heavy combat mass tanks; improvement of existing, but aging tanks in accordance with modern requirements; creation of additional sets of equipment installed on the tank, to work in specific conditions.

On the first point, everything is clear. These will be completely new cars, albeit with the use of "old" developments. Examples are the Turkish-Korean Altay, the Russian tank of the Armata platform, the Japanese “10 type”, etc.

The second direction is mainly to upgrade the onboard electronics of the tanks. At present, the theory of tank design dominates that most of the effectiveness and survivability of a modern tank is not determined by armor or a gun, but electronics: navigation and sighting equipment. Accordingly, the installation of updated systems increases the capabilities of the tank to the extent that the rest of the hardware allows it. In accordance with this trend, the United States is currently upgrading the Abrams tanks of the M1A1 and M1A2 tanks, France is working to improve Leclerc XXI, and China is improving its “99 type”. But apart from this is the Ukrainian modernization program T-64. In 2005, this tank was upgraded to the T-64BM Bulat version: a new gun, a new active protection system, a number of new electronics, etc. Last year, Ukraine also presented the T-64E with a new engine and a twin 23-millimeter cannon. Ukrainian engineers and the military highly appreciate this tank, but it is unlikely that it will be able to show something extraordinary: the original T-64 hails from the 60s of the last century. Even the idea of ​​upgrading a tank almost fifty years old is doubtful. Russia is currently preparing a program for updating the T-72 tanks.

The third method of improving tanks - the creation of sets of equipment for various tasks. So far, mass production has reached sets for just one “different” task - for urban combat. This is the American TUSK system (Tank Urban Survival Kit - “tank survival kit in the city”) for Abrams, the French AZUR (Action en Zone Urbaine — urban zone actions) for Leclercs and the German PSO (Peace Support Operation - “peacekeeping operation”) for “Leopard-2”. In addition, in other countries, simply additional protection kits are being created.
Why are TUSK, AZUR and PSO marked separately? The fact is that this is not just a booking enhancement. These kits include countermeasures to cumulative projectiles, such as gratings and dynamic protection with placement not only on the frontal projection of the tank; turret machine gun with a remote control and / or installation of armor casings on the machine gunner’s hatch, etc. The TUSK kit, among other things, includes additional means of direct communication with infantry. 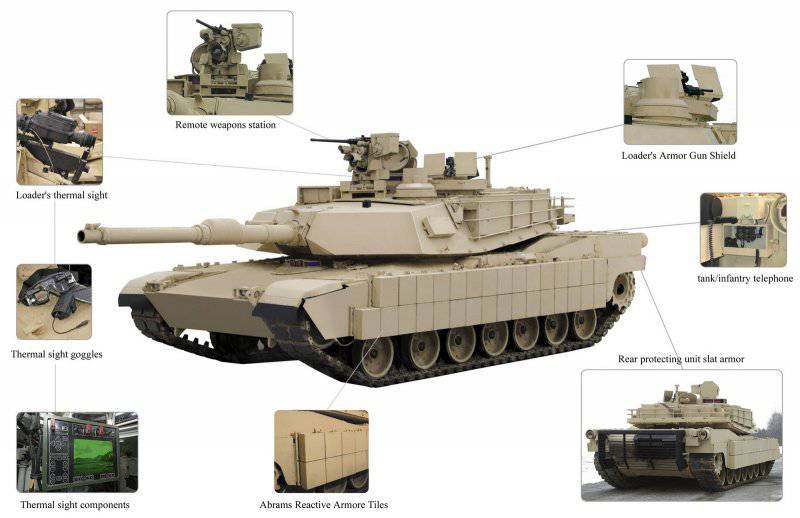 Let's return to the creation of absolutely new cars. This year, Russian gunsmiths have announced work on the Armata tracked platform. On its basis, the main battle tank will be created, although the creation of other types of equipment: BMPs, self-propelled guns, etc. cannot be excluded. Interestingly, Russia is not alone in working on the concept of an armored platform. Swedish engineers have already sent for testing the first machines of the CV-90 family, created on the same base, and Poland has recently begun to carry the Anders platform to exhibitions. In addition, we can not exclude the possibility that the promising American family of armored vehicles FGC will also have basically a single, at least, undercarriage.

Regarding the electronics of new machines, we can say the following: the concept of its composition should not change much. True, the equipment, as the experience of recent wars shows, must include night-vision equipment, and for the entire crew. The military also shows interest in more advanced means of communication, they must ensure, at a minimum, the interaction of different types of troops on the same battlefield. Well, the wildest dreams of tankers are still similar to the reality of the pilots - to have a system for exchanging data about the goals and conditions of the battle in real time, so that all information is displayed on the screens in an intuitive way, like on airplanes. Most likely, this will not happen on the tanks being created now. But for the next generation, this already looks like a very real part.

Ctrl Enter
Noticed oshЫbku Highlight text and press. Ctrl + Enter
We are
Is the old well forgotten to become the new? Part-2. By call of honor and dutyThe fire control devices of the Soviet and German tanks of the Second World War. Myths and Reality
5 comments
Information
Dear reader, to leave comments on the publication, you must to register.