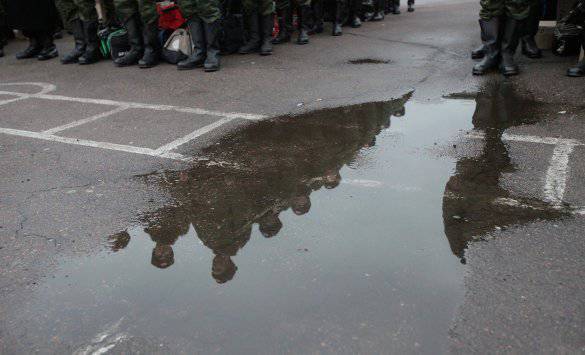 The Memorial Society, the Union of Soldiers ’Mothers Committees and nearly two dozen other human rights organizations signed an appeal to President Medvedev with a call to completely abandon the draft and eliminate the institution of military justice. The immediate reason for the appearance of this appeal was the death of a conscript soldier Ruslan Aiderkhanov.

“We are convinced that while maintaining the draft in its Russian version, it is impossible to modernize the country,” the statement said yesterday that representatives of 22 human rights organizations from 14 regions of Russia sent the president. The initiator of the appeal was the Yekaterinburg Committee of Soldiers' Mothers. Residents of the village of Arslanovo, Chelyabinsk Region, fellow villagers of 20-year-old Ruslan Aiderkhanov, who died in mid-September, addressed the head of this organization, Maria Lebedeva.

The command of the military unit 55062 located in the town of Elan (Sverdlovsk Region), in which private Ayderkhanov served, claims that the soldier committed suicide. The same version was voiced by military investigators, a similar conclusion was made by the military prosecutor's office. However, Ayderkhanov's relatives believe that Ruslan was killed, and army law enforcement officers cover the criminals. “The corpse was found hanging from a tree outside the unit. Relatives, contrary to the prohibition of the military who opened the coffin, found on the body a knife wound, numerous injuries and signs of torture, ”reads the appeal of human rights organizations.

According to the leaders of Memorial, the Center for the Development of Democracy and Human Rights, the heads of regional committees of soldiers' mothers and other social activists who signed the appeal, the tragedy in the Yelan garrison characterizes the current state of the army: “After loud statements at the highest level about the humanization of the conscription service, about the new look of the army, Russian youths continue to die at the sites when destroying obsolete ammunition, outside work, in military units from barracks violence, mass colds vany and refusal of medical care. " Therefore, human rights advocates believe that the authorities should either legally abolish the mandatory appeal or at least suspend it. A moratorium on the appeal should be introduced “to work out a new, corresponding to the Constitution of the Russian Federation and international acts on the protection of human rights, legislation governing its passage and clearly stating its sole purpose: preparing a military-trained reserve”.

The appeal of human rights activists should be perceived as a “cry of the soul” rather than as a formulation of an action program, said Sergei MK, coordinator of the movement “Man and the Army”, member of the presidential council for the development of civil society and human rights. “But the proposals of human rights organizations on army reform, backed up by expert conclusions, were formulated a long time ago,” explains Krivenko, who also signed the letter to Medvedev. According to him, the letter of human rights activists should not be taken as a political statement; it is not related to elections and is addressed to the head of state "regardless of how he will be called." “If, for example, a working group on the reform of military justice is formulated, the corresponding proposals will be sent there,” Krivenko promised.

According to the human rights activist, in the framework of the currently actively pursuing justice reform and the criminal process, it was possible to raise the question of the rejection of military justice, which "serves primarily to" protect the honor of the uniform "and often to cover crimes." Lyudmila Vakhnina, one of the authors of the appeal to the president, a member of the council of the human rights center Memorial, explained in the Criminal Procedure Code that the commanders of the military units themselves or persons appointed by them themselves carry out urgent investigative actions. “But very often the commanders are interested in hiding what is happening in military units,” Vakhnina notes.

She is confident that both for the elimination of military justice and for the final rejection of conscription "only the political will of the top leadership is required." The same opinion is shared by the member of the Presidential Council on Human Rights, the head of the Center for the Development of Democracy and Human Rights, Yuri Dzhibladze. “There is definitely money for this,” he told MN. “Just look at the structure of the budget and take into account the increased costs of maintaining the armed forces.”

Colleague Dzhibladze on the presidential human rights council, Sergei Krivenko, recalls that the country's top officials declared the need for a transition to a professional army from the beginning of 90's. In 1992, a government resolution was adopted on a phased transition to contracting the armed forces. In 1996, then-President Boris Yeltsin signed a decree on the complete abolition of military conscription from 2000 — this decree, according to Sergey Krivenko, “was inspected by the military”, as well as a similar decision of the Russian Security Council, already adopted by Vladimir Putin’s presidency, in 2001. “Then the federal target program 2003 – 2007 was approved for 79 billion rubles, which was also failed, the military explained its failure with low salaries of contract servicemen,” continues the head of the movement “Citizen and Army”.

Yury Dzhibladze notes the contradictory statements of Russian officials: Sergei Ivanov, when he was defense minister, said that “the reform as a whole was over,” the current defense minister, Anatoly Serdyukov, and the chief of the General Staff, Nikolai Makarov, say that the transition to a contract is far from completion. Moreover, in March of this year, Army General Makarov made two directly opposite statements: that the number of recruits should be increased, and that "the armed forces are created for contract soldiers, only with their training can we have a trained army."

The recipient of the message of human rights activists - President Medvedev, meeting with the military personnel of the 45 regiment of the special forces of the Airborne Forces in April, stated that “in the next 10 – 15 years, a combined recruitment and conscription force should be used.” By the 2017 year, the task is to bring the number of contractors to 425 thousand. "This is a half-hearted decision, the process can be accelerated," says Yuri Dzhibladze.