Joint exercises with the US Navy entered the active phase 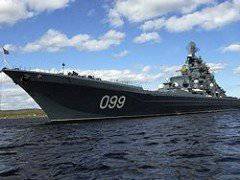 This morning, warships of the US Navy and the Pacific fleet Russia began to jointly develop actions to combat piracy. According to the plan of the exercises, screening teams from the American missile destroyer should search the Russian tanker Irkut, and the Russian sailors, in turn, will land on the American ship Fitzgerald, according to the plan of the exercises, conditionally captured by pirates.

In the afternoon, Russian and American sailors will conduct artillery firing at a surface target.

Then the ships will conduct exercises on the flag semaphore and light communication.

Recall that the flagship of the Pacific Fleet Guards missile cruiser Varyag and the medium sea tanker Irkut take part in the joint exercises of Russia and the United States. From the American side involved rocket destroyers "McCamble" and "Fitzgerald."

October 15, after conducting exercises on joint maneuvering, a detachment of ships of the Pacific Fleet will head for Vancouver.

We are in Yandex Zen
"Varyag" in China. View from Ukraine
5 comments
Information
Dear reader, to leave comments on the publication, you must to register.