Must not be a non-awarded hero

13 2015 June
18
17 of April of this year, the TV channel "Russia 1" ("Local time. Moscow") recalled the feat of the pilot Alexander Mamkin. On the night of 10 on 11 on April 1944, he burned alive in a padded, dusty plane, but found the courage to take the orphans of the Polotsk orphanage from which the Germans intended to pump blood for their wounded out of the occupied zone. Alexander Mamkin died, but more than 80 descendants of the rescued orphans, who called themselves the children of Mamkin, live on earth.

However, the feat of Alexander Mamkin did not become a nationwide example of supermanagement. Although after the publication in Komsomolskaya Pravda of 11 in February of 1965, the article Fiery Flight and the article “Because he lived in the world” of 17 in March many schools began to fight for the name of the hero pilot, although verses and stories were published about him. As if the “Gold Star” introduces the hero into the galaxy of the legendary Alexander Matrosov, Nikolai Gastello, Zoya Kosmodemyanskaya, Viktor Talalikhin ... As if the hero without an asterisk and not a hero at all ... And I wanted to return to stories a forgotten feat. 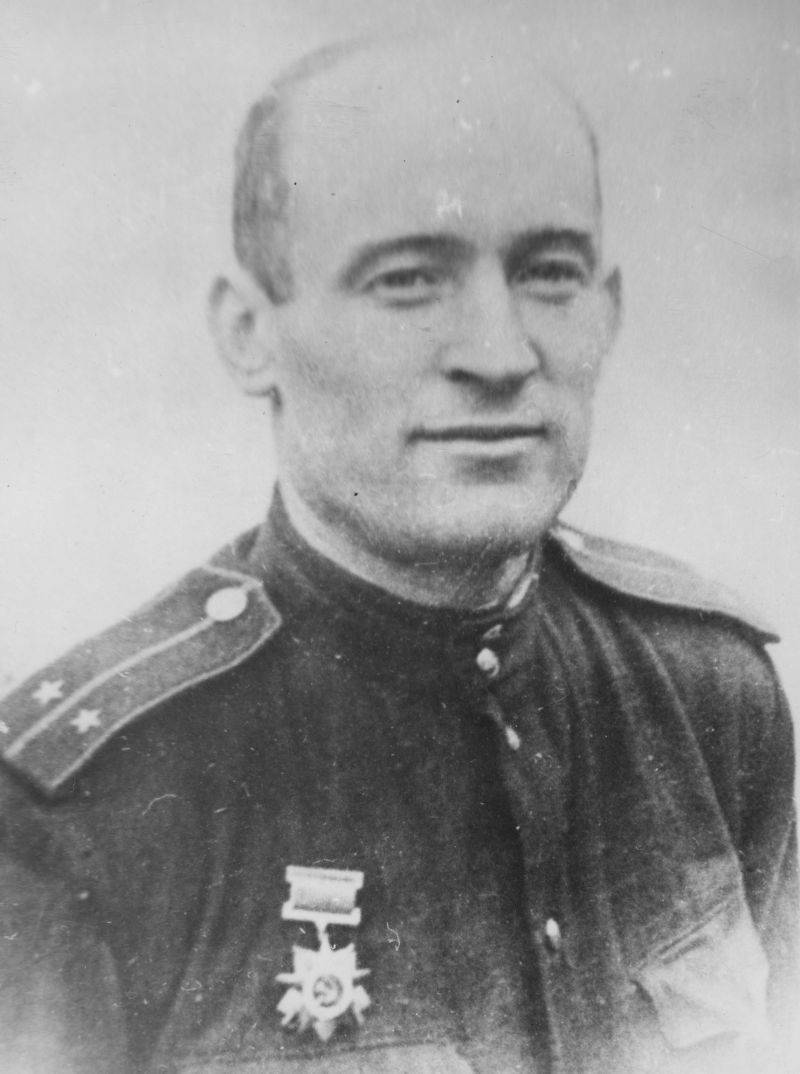 On the night of April 10-11, 1944, Guard Lieutenant Alexander Mamkin, pilot of the 105th Guards Civil Aviation Regiment fleet (GVF), already on the seventh flight, brought from the deep rear of the enemy the orphans of the Polotsk orphanage, rescued by Belarusian partisans from the fate of donors for wounded fascists. Above the front line, the aircraft was fired upon, the cockpit flamed. Mamkin burned alive, but continued to drive the car to his own under the cry of a child, managed to put her on the ice of the lake near the city of Velizh. The regiment’s doctors didn’t understand how a man in a burning overalls could drive a car, how he could make a landing and pass a half-burned body across the side in fused canned glasses and into a child, step ... Charred legs in fur boots broke. The oldest boy of the children, Volodya Shishkov, opened the cab door. Together with the teacher Valentina Latko, he took out frightened kids and two seriously wounded partisans.

Sasha Mamkin's friends, and among them my father, the commander of the partisan squadron Nikolai Ivanovich Zhukov, all the post-war meetings began, without clinking, with a toast: “For Sasha! Let him be calm there. ” His successful landing was attributed to the great experience of night and blind flights, and his exceptional courage was explained by the fact that Sasha had been hungry for two years old: pity for underprivileged children turned out to be stronger than pain from burns. The hero was buried in the village of Maklok, in 1960's reburied in Velizh, in the mass grave of the memorial "Lidova Gora". 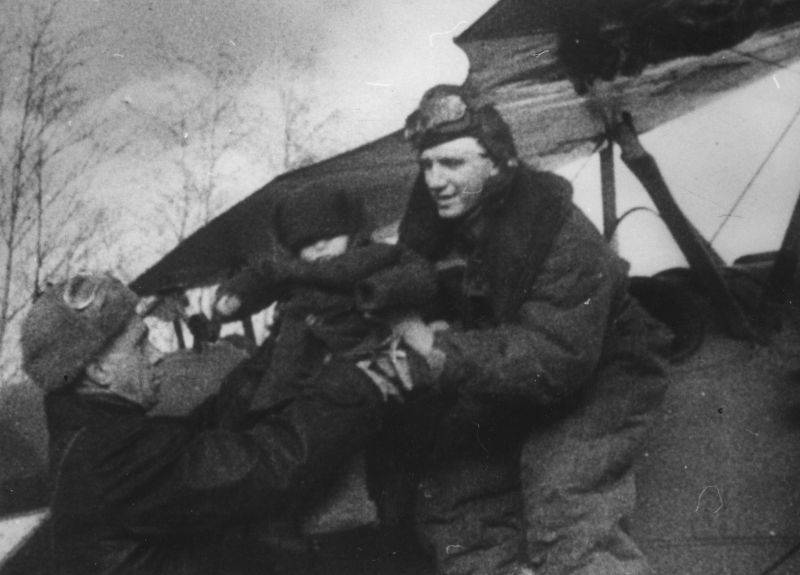 By happy coincidence, on the day of the last flight of Sasha, Moscow cameramen flew to the partisan airfield. They managed to take off, as a broad-shouldered pilot, with a kind smile, sat on a plane of emaciated, skinny kids dressed in homemade clothes and shoes. Our television and today quite often demonstrates these shots on International Children's Day, without naming, however, the name of the pilot. But they entered the film of the Belarusian documentalists “Road without a halt” of the beginning of 1960-s, the name is named.

It is erroneously reported that for his exploit, Alexander Petrovich Mamkin was awarded the Order of the Red Banner (POSTERLY)

In many publications in newspapers and magazines, in the memoirs of war veterans and partisans, it is erroneously reported that Alexander Petrovich Mamkin was awarded the Order of the Red Banner (posthumously) for his feat. This is even affirmed in the fundamental work of the Ministry of Transport, “Peaceful Wings during the War.” Veterans of the regiment more than once wrote indignant letters to the Ministry of Civil aviation, and to the Ministry of Defense, explaining that Lieutenant Mamkin was among the other pilots of the regiment on April 6, 1944, four days before the feat, to the Order of the Red Banner of the Guard. A rewarding order was issued on April 21, after the death of the hero, and was mistakenly perceived as posthumous. The error was “corrected” in the encyclopedic dictionary “XX Century. Civil Aviation of Russia in the Persons ”(Moscow: Air Transport, 2000) to a new one:“ A.P. Mamkin for an outstanding feat was awarded the Order of the Patriotic War of 1 tbsp. posthumously". In fact, according to the archival certificate of the Ministry of Transport of the Russian Federation of April 15, 2002, this order was awarded on August 31, 1943. That is, Alexander Mamkin was not awarded for the feat, although, according to the memoirs of veterans, the regiment sent a presentation to the title of Hero of the Soviet Union.

THAT IS FOR THE EXPLORATION ALEXANDER MAMKIN WAS NOT AWARDED, AT LEAST, IN THE VETERANS MEMORABLE, THE REPRESENTATION ON THE TITLE OF THE HERO OF THE SOVIET UNION OF THE COLONCUS SENDED

The aforementioned publication in Komsomolskaya Pravda for 11 February 1965 of the year announced a document in the archives of the Ministry of Civil Aviation confirming reports of regimental veterans: “At the same time I present the material on the assignment of the posthumous title of HERO OF THE SOVIET UNION Guards Lieutenant Mamkina Alexander Petrovich. Appendix: On 6 sheets and 7 photo cards in the address. On 2 sheets in the case. ” On the certificate is the date - 28 June 1944 of the year. Over the past half-century since 1965, the brother-soldiers and partisans remembering their heroic deeds have appealed to the USSR government several times to consider awarding the hero with the title Hero. In 1990, in response to the appeal of People’s Deputy I.F. Klochkova, the secretariat of the USSR Supreme Council, was finally inspired by a letter signed by the First Deputy Chief of the USSR Personnel Directorate of the Ministry of Defense Colonel-General Arapov: “The USSR Ministry of Defense considers it possible to consider awarding ... at the recommendation of the Ministry of Civil Aviation.” But soon the country called the USSR ceased to exist. And the Ministry of Civil Aviation, too. 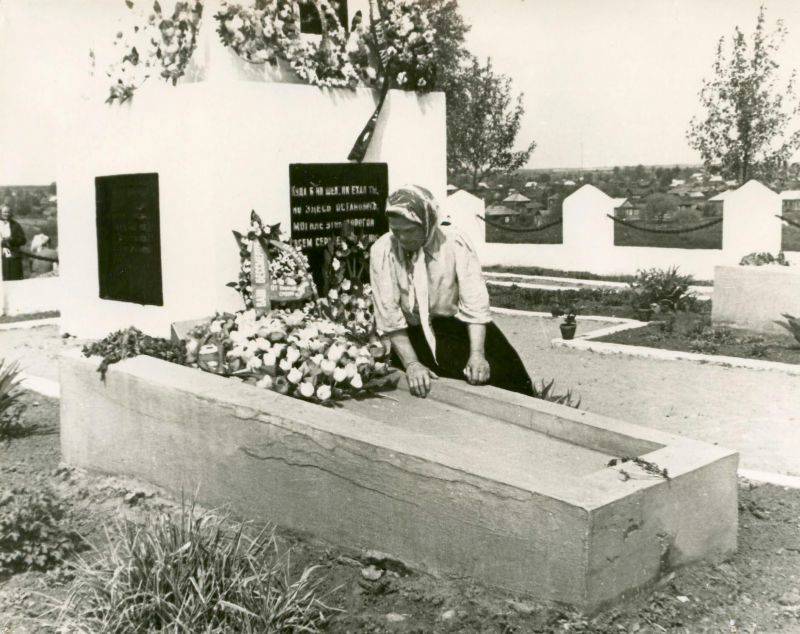 At the beginning of 2000's countrymen, Alexander Mamkin, residents of the Repyevsky district of the Voronezh region, raised funds for the installation of a bust to the hero in the village of Repyevka. Opened a small museum. Several times they filed letters of petition signed by hundreds of people to the president, the government, the Ministry of Defense. But the letters are sent to the Main Personnel Directorate of the Ministry of Defense of the Russian Federation, and from there came the on-duty refusal on the basis that materials for submission to the title of Hero, attached to the letter to Lt. Col. Lavrenov, were not preserved in the archive. But after all their duplicates are present in the archive!

I attached all these duplicates to the letter to the head of the Main Personnel Directorate of the Ministry of Defense, starting with the main document - “Act of investigating the causes of flight combat losses ...” - and describing the feat.

I was surprised when I received an answer from 20 December 2011 of the year illiterate due to ignorance of the history of the Great Patriotic War:

“From the materials presented by you it follows that Guards Lieutenant Mamkin Alexander Petrovich during the Great Patriotic War served as a part of the 2-th separate and 105-th Guards aviation regiments of the Civil Air Fleet. These units were not part of the Red Army (Navy). Considering the above, the Ministry of Defense of the Russian Federation has the legal grounds for submitting submissions on the assignment of A.P. Mamkin the title of Hero of the Russian Federation (posthumously) is not available. "

Neither the performer, nor the head of the Personnel Directorate of the Ministry of Defense of the Russian Federation Lieutenant-General V.P. Goremykin, apparently, do not know that the order of the People’s Commissar of Defense of the USSR from 9 July 1941 "GVF personnel directly enrolled in special GVF air groups, considered as drafted into the Red Army" (RGAE. F. 9527. Ref. 1. D. 13. L. 64). By the way, I was amazed by the question of one of the employees of the premium department, a young officer who asked me: “What is the CAF?”
Formed on the basis of the 2-th special air group of the 105-th civil aviation fleet regiment for flying to the surrounded parts, helping to bring them to their own and establishing an air connection with the guerrillas was awarded the title of the Guards, the Order of Alexander Nevsky, the name Panevezhsky - for participating in the liberation of the Lithuanian SSR .

After such a refusal to again raise the issue of non-awarding the hero with the title of Hero, it seemed meaningless. Now, when the 70 anniversary of Victory died down, I realized that I was wrong. 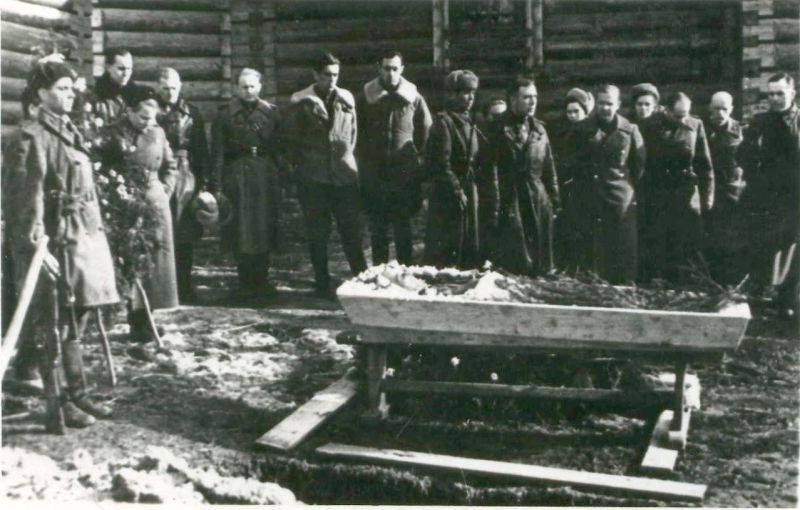 Consoles one. Alexander Petrovich Mamkin had no children, but the orphans he rescued called themselves Mamkin’s children, and their children, Mamkin’s grandchildren, were often given the name Alexander. Recently, the grandson of Vladimir Shishkov, the most adult of the children saved by Mamkin, said that Mamkin's great-great-grandson is already growing in his family in St. Petersburg! The bright memory and the continuation of the life of the hero! 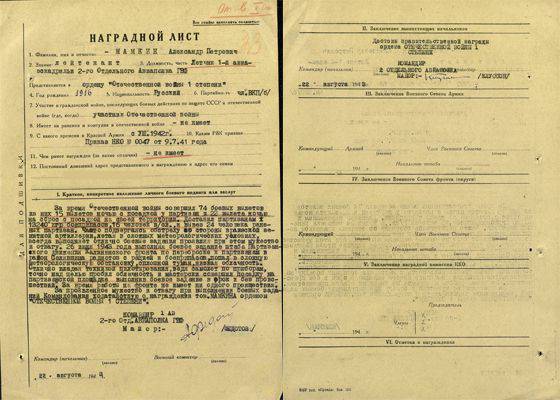 And yet ... There should not be a hero who is not awarded! Every year on June 1, the world celebrates International Children's Day. In Russia, this day is not associated with any feat in the name of saving children. And there is such a feat!