The National Interest: Should America be worried about “Almaty”?

5 2015 June
143
Appearance of a new tank T-14 “Armata” became a real sensation. Since the appearance of the first data on the development of this machine, discussions have not stopped. It is noteworthy that not only Russian experts and amateurs of military equipment argue. The new Russian tank attracts attention abroad. The result is curious press releases.


30 in May, The National Interest published the American edition of Robert Farley’s article entitled Russia's Mighty T-14 Armata Tank: Should America Be Worried? (“The mighty Russian tank“ Armata ”: should America worry?”). The author of this publication is an adjunct professor at the Patterson School of Diplomacy and International Trade. Holding this position, R. Farley deals with issues of national and international security, including studying new military equipment. Thus, the recent publication in the American edition is of great interest. 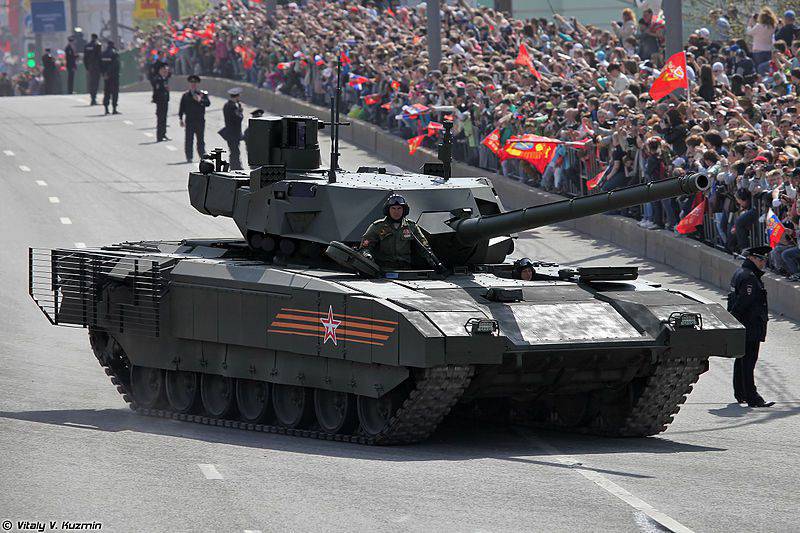 At the beginning of his article, the author notes that the new Russian tank, which is part of the family of promising armored vehicles, really attracted attention. However, he has a question: is all this hype justified? This is exactly what the American specialist tried to figure out.

Earlier, The National Interest has already published several articles on new Russian developments in the field of armored vehicles. According to R. Farley, the Armat’s new family of equipment has little to do with previous Russian developments in this field. All these features of the new tank, as well as the very fact of its existence, lead to legitimate questions: is it worth it for the United States to worry about “Almaty” and how exactly should this concern be? Already, the new tank looks impressive. It is unlikely that he will face in the future in battle with American armored vehicles, but do not forget about the possible impact on the international arms market.

To assess the prospects for new technology you need to examine the available information. This is what Farley did. He recalls that the Armata project is developing a whole family of armored vehicles for various purposes, built on the basis of a common chassis. This feature of the project should improve various aspects of the operation of serial machines. In addition, according to the American specialist, the influence of the Israeli tank Merkava is noticeable in the Russian project. This fact is the key to understanding what the Russian military wants.

R. Farley gives a list of the main advantages of the Armata family tank project. It is a modern powerful armor, uninhabited tower and crew compartment of high security. It is noted that special attention to the level of crew protection indicates the desire of the military to preserve the life and health of the crew.

The author of the publication in The National Interest believes that the flexibility of the Armata family of equipment can provide him with a high export potential. Different customers have different requirements for technology, and the use of a common platform will allow you to build machines with the desired characteristics. In practice, this means that armies will be able to order equipment that best meets their requirements, for example, in a tank configuration for a so-called. conflict of low intensity or in the version of the "classic" main battle tank.

Then R. Farley makes an attempt to analyze the state of Russian tank construction. He admits that Russia can produce armored vehicles in large quantities. This, among other things, makes it possible to conclude multiple export contracts. However, it should be noted that the potential of the industry may be the subject of controversy. The fact is that in the early nineties, Russian enterprises massively built T-80 and T-90 tanks. The financial problems of the state by the end of the nineties led to the fact that only one tank remained in the series.

An additional reason for doubt is the breakdown of the T-14 tank at the Victory Parade rehearsal. According to R. Farley, this may be evidence of some of the political needs of the administration of V. Putin, but not proof of the high quality of the assembly of equipment. Indeed, the T-90 has established itself as a good and reliable armored vehicle, but in the case of the Armata, there are still reasons for doubt.

A typical problem of the Russian defense industry, according to R. Farley, is personnel issues. The workers of defense enterprises are aging, and the search for new personnel is associated with certain problems. Due to the dependence of the country's economy on the mining industry, other industries are unattractive for young professionals. At the same time, Russia maintains a good position in the international arms market, although this success is primarily associated with the modernization of old designs.

Also, the “Armata” project is associated with some production and technological risks. The most interesting features of the project are also complex in terms of production. R. Farley notes that the T-80 and T-90 tanks inherited much from the older T-72. The continuity of the new "Almaty" is much lower, which can accordingly affect the complexity of mastering production.

Russia has enough time to solve all the existing problems. Nevertheless, in the event of the emergence of new unexpected obstacles, in the opinion of the author of the publication in The National Interest, the situation with the new tank may become similar to the current state of the PAK FA project. R. Farley recalls that just a year ago, a promising Russian fighter was considered the most dangerous representative of its class in the world, not inferior in performance to the American F-22 and having a lower cost. Now the situation looks different. Russia is forced to cut plans for the purchase of this technology, and the Indian Air Force expressed various complaints about the project of joint development of a fifth-generation fighter.

In the past three decades, there have been intense debates about tank prospects. Existing machines, as rightly noted, do not always have the capabilities that the military would like to have. A typical main battle tank is heavy, noisy, visible and expensive to operate. Many modern conflicts require different qualities, primarily mobility and secrecy. Thus, it no longer makes sense to study and discuss hypothetical battles with the participation of the T-72 and M1A1 tanks at the European theater of operations.

However, in some cases, tanks retain their combat potential. Such equipment still plays an important role in the battles in Iraq or Afghanistan. In addition, R. Farley notes the successful use of tanks by Russian troops in Chechnya, Georgia and Ukraine.

At the same time, the author of the publication Russia's M-T-14 Armata Tank: Should America Be Worried? Emphasizes the experience of the operation of Israeli Merkava tanks. These vehicles retain a leading role in operations conducted in Lebanon or the Gaza Strip. This suggests that tanks with a high level of crew protection and good firepower, such as the Armata, still have great prospects.

R. Farley believes that the United States should think about the creation of a new main tank. The existing M1A2 Abrams retains a dominant position, but still needs to be replaced. Nevertheless, it is not yet possible to say that the Russian T-14 tank is a worthy reason for the development and construction of a direct replacement for the Abrams. A more pressing issue is the creation of a new infantry fighting vehicle to replace the aging M2 / M3 Bradley. 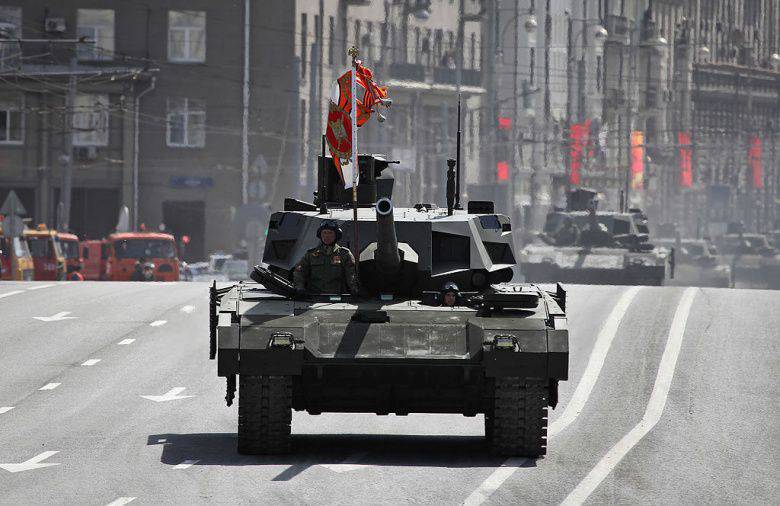 What are the prospects of "Almaty" in the international arms market? Nicholas K. Gvozdev, whose articles are also published in The National Interest, suggests that in the future Russia may become an “arsenal of autocracy,” and the new Russian tank is capable of seriously affecting the world market. The manufacturer “Almaty”, the corporation “Uralvagonzavod”, is already studying the demand and is going to sell such equipment to various states of Central Asia or Egypt.

R. Farley does not exclude such transactions. However, he notes that after the end of the Cold War, the number of tanks exported by Russia was significantly reduced. So, India became the main buyer of T-90 tanks. Other countries have ordered less of this technology. Deliveries of new technology to the Indian military are now also in question. Earlier, the Russian industry supplied finished machines and assembly kits. Over the next few decades, the Indian army plans to switch to domestic armored vehicles. India spent a lot of time and effort to create its own Arjun tank, which may raise doubts about the possibility of ordering Russian T-14.

China has not been producing tanks for export for several years. For its army, the Chinese industry is building tanks "Type 99", which by their characteristics are close to the T-90. In addition, there is reason to believe that Chinese equipment is cheaper than Russian. So far there is no information about the development of China tank level Russian "Armata". At the same time, Russian tank builders have already expressed their concerns about a hypothetical contract for the supply of T-14 vehicles to China. The industry of this country is known for its zeal in copying foreign technology. Thus, by copying Armata, China will cease to be a profitable customer and turn into a serious competitor.

The American expert believes that the most important thing about the influence of “Almaty” on the market lies not in possible contracts. The anxiety associated with the transformation of Russia into an “arsenal of autocracy” leads to some conclusions. Thus, the United States, despite the political situation, continues to sell various autocratic weapons and military equipment. At the same time, Russia has advantages in the case of some similar countries, since it ignores their political position. Nevertheless, the number of such countries that prefer Russian weapons to American ones is constantly being reduced by changing the position and views of the United States.

Russia is updating its armored forces. At the same time, measures are being taken to develop the naval fleet and air force. The ability of the industry to cope with its tasks raises serious doubts. According to R. Farley, the successful implementation of all plans is hindered by the fact that Russia has to pay for active actions in Ukraine and the "occupation of Crimea." In addition, absurd programs such as the restoration of production of Tu-160 bombers may interfere with the implementation of plans.

Export prospects of the tank "Armata" are of great interest. If Russian designers succeed in creating a relatively cheap combat vehicle with high performance, then it will be able to win market share from other armor manufacturers. Nevertheless, it is still not completely clear whether the Russian defense industry will be able to cope with the task and create a combat vehicle with the required characteristics.

It is necessary to take into account that at the moment the amount of confirmed information about the Armata project leaves much to be desired. All this does not allow to fully assess the prospects of the new tank. As a result, at the moment all specialists and interested public are forced to operate with assumptions, unconfirmed information, etc.

A recent article by Robert Farley is a clear confirmation of current trends. Without the necessary information, the American expert is trying to speculate, which, however, may not correspond to reality. In addition, some points of the article “Mighty Russian tank“ Armata ”: should America be worried?” Suggest that its author does not fully use even open information. It should also be noted political implications of the publication, expressed in constant, including not always justified, criticism of Russian projects.

Nevertheless, the publication of The National Interest is of some interest, as it vividly demonstrates one of the points of view that exist abroad. It is obvious that in the USA and other foreign countries there are other views, but the article by R. Farley perfectly illustrates the most interesting opinions about the new Russian project.