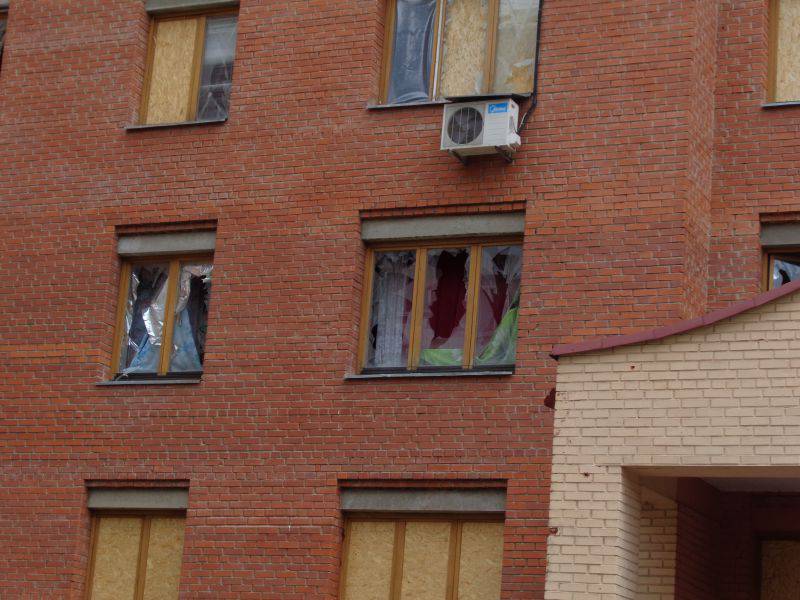 At dawn on June 3, many residents of Donetsk did not sleep - it was noisy and disturbing. From the north and west - from the "dill" - artillery worked.

In the morning trolley, passengers were worried. In the conversations, the words sounded: “The war began again” (although, of course, it did not stop, but the people meant its intensification). People called relatives living on the outskirts, asked whether everything is in order.

Because of the shelling, some public transport routes were canceled or shortened. “My passport burned down during the bombing,” complained a man who did not know how to get to his area now, where buses do not go, and only those who have a local residence permit are allowed.

Usually ukrovoyaki began their shelling in the evening, but this time they changed themselves. After the morning attack for a while, everything was quiet. However, around two o'clock in the afternoon powerful salvos were heard again. Passers-by (in the Kievsky district of the city) were alerted: “This is closer than usual. This has not happened for a long time. ”

Indeed, as it turned out, hits in residential buildings were recorded less than a kilometer away - on Politboytsov Street. There are wounded.

In addition, "ukropovskie" shells landed on the market "Falcon" in the neighborhood Tekstilshchik. There are already quite a few people there, already for a long time, but still there were no victims. The market is almost completely burned out. But especially got the Petrovsky district. Gorlovka and the village of Shyrokino were also subjected to shelling.

According to official figures, 90 people suffered as a result of the shelling. At least 19 - and military DPR, and civilians died. Doctors are sounding the alarm: there is a catastrophic lack of donor blood.

In four microdistricts the plumbing was seriously damaged. In addition, due to falling into the transformer substation, television was broken.

The miners of two mines, named after Zasyadko and named after Skochinsky, were in grave danger. As a result of damage to power facilities, these mines were de-energized, and about 600 people remained underground, where they stayed for several hours. All these long hours, their relatives did not find a place for themselves - to the general concern this was also added. Fortunately, rescuers managed to extract workers from the dungeon at the mine to them. Skorchinsky, and electricity mine them. Zasyadko restored. All the miners, thank God and the rescuers, are alive.

Of course, such a powerful shelling could not remain completely unanswered - otherwise there could have been even more casualties among the Donetsk residents. Firstly, even the Minsk agreements imply a response to such attacks. Secondly, unlike the Ukrop punishers, who use the large-caliber guns strictly forbidden by Minsk, the Donbass defenders have 80-mm mortars allowed by the same agreements.

Further, the message that caused euphoria in the ranks of supporters of Novorossiya was rapidly spreading, that the DPR troops occupied the village of Marinka. There really were fights in this area, but everything turned out to be not so simple at all.

In the leading media, including the Western ones, there were immediately reports that the DPR allegedly “violated the Minsk agreements”. The threats fell, of course, against Russia - Washington even began to intimidate by increasing sanctions. Prior to that, neither in Europe nor overseas simply “saw” numerous violations of the Minsk truce by the troops of the Kiev junta. They "did not hear", in particular, neither the shelling of Donetsk 29 in May, when there were graduation parties, nor in the International Children's Day 1 in June, when the little town was spoiled by a holiday. But the moaning of the “dill” offended by the counterstrokes was immediately heard and picked up.

The Deputy Commander of the Armed Forces of the DPR, Eduard Basurin, made a special emergency statement in which he laid the blame for the deterioration of the situation on the Kiev side. He stated that during the last weeks the DPR was constantly saying that Kiev was pushing heavy artillery and armored vehicles, as well as activating sabotage groups. All this information was transmitted to the OSCE monitors, but there was no proper reaction.

“Little victory” in the Donbass to decorate tomorrow's Poroshenko’s performance in the Rada Kiev failed. This victory was to take place in the area of ​​Marinka. In the first half of the day, our reconnaissance recorded an unusual revival there in the positions of the enemy. Then the Ukrainian security forces from positions in the neighboring Krasnogorovka first opened fire on our positions, and then on the positions of the Armed Forces of Ukraine in Marinka. Allegedly, in response to these attacks, Ukrainian artillery in the controlled part of Marinka opened massive artillery fire on our positions on the outskirts of Donetsk. Soon, she was joined by the artillery of the Armed Forces of Ukraine, Krasnogorovka. As a result, the positions of our armed forces on the outskirts of Donetsk found themselves under cross artillery fire. There is no doubt that Kiev’s advance planning for this provocation, ”said Basurin.

He also voiced the possible goals of such provocative actions — Kiev’s concentration of armored vehicles and artillery pieces prohibited by the Minsk agreements to prepare even more ambitious provocations in the future or directly for the assault on Donetsk.

The General Staff of Ukraine does not hide that it was used against the defenders of the DPR weapon, expressly prohibited by the Minsk Treaty. Allegedly, this was done to "stop the enemy offensive." “The Ukrainian command, having warned all international partners, was forced to use artillery, which had previously been located in certain areas of the Minsk agreements in the rear,” the Ukrainian General Staff said.

That is, these same “international partners” knew perfectly well who exactly was using the forbidden heavy artillery. But all the "bumps" again fell on the head of the residents of Donbass, as well as to Moscow. State Department spokeswoman Marie Harf cynically said: "Russia is directly responsible for what is happening."

Presidential spokesman Dmitry Peskov reasonably replied that the exacerbation of the situation is connected with the “provocative actions of the Ukrainian military.” He also expressed concern about the "continued shelling of settlements in the Donbass, with the death of people and children."

While this war is going on on the diplomatic front, residents of Donetsk and other cities of the Republic are waiting for new tests from the ongoing real war.


In the photo - a house in the Kiev district of Donetsk, damaged by previous shelling.