Tricky comments. Novaya Gazeta and its original approach to journalism

4 2015 June
26
I read an editorial from the latest issue of Novaya Gazeta and could not believe my eyes. Personally, the chief editor fears for the fate of those "Russian special forces". Those who for some reason served as simple policemen of the LC at the checkpoint.

What is it? Normal human reaction to danger to the lives of prisoners? Understanding that Aleksandrov and Yerofeyev are interesting for the SBU, not so much as the wounded, but as a possible source of secret information? Or maybe the understanding that "people in white coats" can not only heal the sick and wounded, but also gut the brain?

Is this the "New" understanding? Well, sorry ... 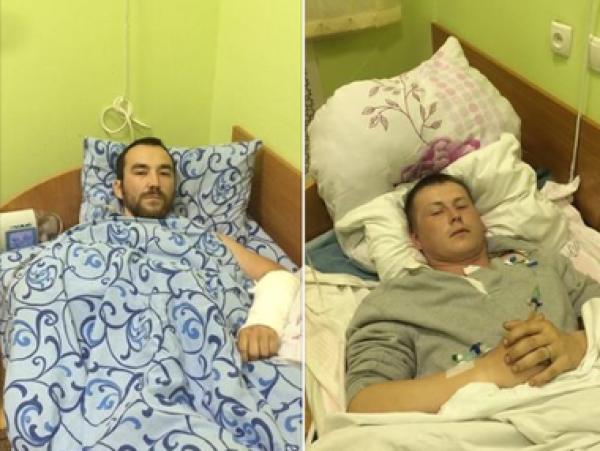 Strange oddities. None of the Russian journalists on a cannon shot is not allowed to prisoners. Spetskor "NG" - please. No one, not even the Russian consul, knows the reasons for banning visits. The chief editor of "Novaya Gazeta" explain everything! On the shelves laid out. SBU representative Markiyan Lubkivsky is personally involved in this. Burning with zeal.

"Given the significant amount of work that investigators need to do, as well as the importance of medical rehabilitation of those arrested ... the Russian consul can be admitted to them no sooner than a month or two since the last visit."

We remember this moment. 26 May 2015. And we also remember the statements of the same representative of the Security Service of Ukraine on the observance of international agreements.

So, by the end of July, the wounded prisoners will be “rehabilitated”.

Mr. Muratov, have you tried to talk to the doctors? Not about your precious health, but about the timing of rehabilitation after such injuries and injuries? Do not talk to academicians or doctors of medical sciences. It is enough to “drop in” at any emergency room and talk to the on-call trauma surgeon. They, of course, do not write articles. They treat people with injuries daily. But the question about the duration of treatment will be answered without hesitation. From and to the timing of rehabilitation.

Novaya Gazeta paid a lot of attention to Yerofeyev and Aleksandrov. It is clear the desire to give "hot" material. Or maybe conduct a "cover operation"? I do not know. I think the staff of the SBU stood applauding every material. This "information bomb" was thrown. What just words are not written. What only versions are not advanced. But most importantly, in any article it has always been the same - these are “Russian special forces”.

You wonder how beautiful the materials were. Someone from the acquaintance replied that he seemed to have served somewhere. Everything! Served, okay? And "Somewhere" is the best proof of that in special forces. And nothing else. Secrecy after all.

Here is the proof. For Novaya, it doesn’t matter what the officials say. The main thing is the opinion of the journalist! Documents? So what? The journalist is still more important. Although one statement was heard. The fact that people with such names and names are really Russians and serve in the militia of the LPR.

It was thanks to the materials of your newspaper, Mr. Editor-in-Chief, that this scandal with the "Russian special forces" in Ukraine unraveled at the right time. You are guilty of the fact that ordinary policemen have become “stars” of Internet sites.

It is thanks to “New” that these people most likely will never return to their families. You are the source of evil! The source of the "breaking" of the lives of two normal Russian guys who, at the call of their hearts, went to help Donbass.

“They promised to let it happen, but now what has changed? We are already afraid for the fate of the wounded Russians,” says the editor-in-chief of Novaya Gazeta, Dmitry Muratov. “Why did you have to first get admission, and then the ban“ for medical reasons, ”although the special correspondent Kanygin, Alexandrov and Yerofeyev look quite capable of dating, dialogue, independent behavior. "

Bravo! And about that Moor, who did his job and should leave, did not hear?

Now the task is another side. What to do now with these "special forces" who have already fulfilled their role? Kill? It is impossible. Too many now know about them. Too "raspiaril". Send to Russia? Also impossible. Russian doctors are not worse than Ukrainian. And much better. Calculate the "impact technique" very quickly. Plant years on 10-15? Also not an option. Just because both in Russia and in the EU countries there will be those who are organizing such a campaign, that the "sidelists" will have to be handed over to Russia.

There are two options. And both are already voiced by Novaya Gazeta. Yes, Mr. Muratov, your journalists and voiced.

The first one I'm writing about. About your words. About the "care about fate." Fearing the fate of Alexandrov and Yerofeyev, you are pushing “sane” readers to the idea that they can be destroyed. There can be many ways. From the banal suicide of an overdose of drugs to hired killers from among those non-mythical "Russian special forces". No matter. The main thing is that the guys will die.

But this version for "talk", nothing more. But your second version is more interesting. The second, but voiced was the first. In the very first report of Mr. Kanygin.

Remember the words of Yerofeyev that he is "still" a citizen of Russia? Here they are, the very ears for which you can "pull the rabbit out of the mink." This "still" explains a lot. True, you need to add more and the statement of the SBU. You also know him, but for readers I will remind you. In the Ukrainian press there was a message from the official representative of the Security Service of Ukraine that the security service took measures to prevent the poisoning of prisoners ... with polonium.

In Russia, the security services are blunt. And with science really bad. Well, nothing new can come up. And the polonium is just a sea. In any store for sale. Further and it is necessary to explain nothing. The main thing is that the “moor is gone,” although it still sticks periodically.

In order for the materials of your journalists to look more or less plausible, you are forced to publish part of the truth. Readers begin to laugh from meetings in trains and airplanes with talkative scouts, militia deserters from Novorossia, sent by “Cossacks” from the “troll factory in St. Petersburg”.

To help your authors tell the story of further developments. Why do you need to break the head?

In late July - early August, both "special forces" will make a statement about the renunciation of Russian citizenship and the filing of a petition to the President of Ukraine to grant them Ukrainian. Cause? The refusal of diplomats from Russia to help their citizens. Russians abandoned theirs. What is not discrediting the famous words of Putin?

The SBU will announce the end of the investigation and the transfer of the case to the prosecutor’s office of Ukraine. At the same time, investigators and official representatives will give numerous interviews about active assistance to the investigation.

The prosecutor, taking into account the petition of the Security Service of Ukraine, will decide to close the case. Or about the transfer of the case to court. And there the same decision will be made. Justice is not cruel, as in Russia. Mercy will show.

The President of Ukraine will also make a gesture of goodwill. Sign a petition for citizenship. And at the same time and may have mercy. Television and media in Ukraine for a week or two will show the happiness of new citizens. And citizens - to praise Ukraine everywhere and always.

And in half a year or a year, “separatists” (variants: “Russian special forces”, “Special Forces of the GRU”, nationalists of the Russian Federation or Ukraine, participants of the ATO who lost friends in battle, etc.) will commit a brutal, but not revealed, murder ...

The original approach to the business of "Novaya Gazeta" is truly a talk of the town. So soon "Echo" or "Rain" surpass! However, Mr. Muratov, will be rendered to everyone according to his deeds. I hope you will be rewarded. And the one who gave you money for your publication.

P.S. If anyone doesn’t know, I’m reporting: the financial founding father of NG is someone Gorbachev MS