Bees and wasps of Russia. "Your birthday is the best without a doubt ..."

4 2015 June
24
On the "Military Review" the other day out materialin which it was told how the Russian “non-living opposition” prepares actions (if possible, large-scale) in three large Russian cities: Novosibirsk, Kostroma, Kaluga. Financing of the shares for the most part goes through the "RPR-Parnasovtsev", the head of which visited the United States not so long ago, demonstrating to the "partners" a list of Russian journalists for whom it is necessary to introduce a portion of sanctions.

The fact that, like the flies on the city ..., other leaders of the so-called “non-system opposition” are going to fly to these actions, it became clear from boiling Facebook and twitter of some of them. So, on the eve (June 3), Alexey Navalny told Twitter readers about his sharply expressed desire to be in Kaluga on the day of the opposition rally there. According to Navalny, he will arrive at the opposition event in 18: June 00. The action is dedicated to the participation of the so-called Democratic Coalition in the elections to the Kaluga Legislative Assembly and the City Council of Kaluga scheduled for this fall. The head of this coalition is Mikhail Kasyanov - the one who drove overseas owners to the sanctions lists, and who returned, apparently, not empty-handed ...

Just a couple of days before it became known about the imminent departure of Navalny to Kaluga, there appeared information of a completely stunning nature. This information was presented by the Deputy Chairman of the State Duma of the Russian Federation (United Russia faction) Sergei Neverov. Neverov on his Facebook page wrote that a man called Alexey Navalny addressed him by phone with a proposal to discuss the future elections in Novosibirsk ... 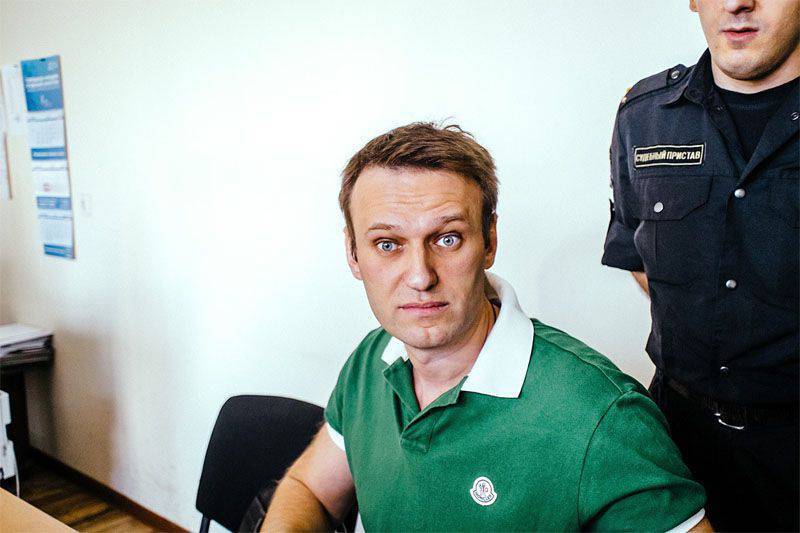 This one post by Sergei Neverov from 1 Jun:
Today in 15: 35 from the phone + 79167410689 on my mobile called a man who introduced himself as Alexei Navalny. He offered to meet and discuss the elections in Novosibirsk and the upcoming opposition rally. He said he was ready to drive up.
I publish this, because I believe that it is dishonorable to negotiate behind the back of my comrades. I want to ask: Alyosha, does your management know about this call?

At the time of the preparation of the material, it was not possible to find out whether the “Alyoshino leadership” knows about his call to Neverov, systematically poured over by mud flows by the same Navalny. But it was possible to find out that by telephone, the Deputy of the State Duma from the "ER" really called Mr. Navalny. This was told by the “oppositionist” himself:

In September, elections are in the country, as you remember (hopefully). The Democratic coalition on the basis of the RPR-Parnas participates in elections in three regions: Kaluga, Kostroma and Novosibirsk regions.
To compile a list of candidates, we hold primaries.
To register the list (admission to elections) we will need to collect signatures. 4500 in Kaluga, 2800 in Kostroma and 11700 in Novosibirsk.
The hardest time in the Novosibirsk region is the shortest time and most signatures.

How is this connected with Sergei Neverov, the owner of the cottage, mother-in-law and who is the secretary of the General Council of the United Russia party? The Novosibirsk headquarters informed us that it was Neverov who was in charge of the elections in the region, and he held all sorts of meetings on the topic “how to prevent democrats in elections”.
We decided to take the lead and directly call them (deputies from United Russia) to check our signatures before delivery, in the presence of journalists.
How to call? By happy coincidence, Neverov is the only high-ranking United Russia member whom I know personally, I saw in court when he demanded that I recognize his dacha as a dacha for his mother-in-law.
Personal acquaintance so-so, but there is nothing to choose from, so the headquarters decided: call.
In short, I must admit that Sergei Neverov broke our drama a little bit and it’s impossible to officially hand him a beautiful paper with an offer to come, watch and check our best ideal signatures in the world, and then publicly testify to the whole world that they are perfect.

In general, Navalny, apparently, decided to get off the water, in his own way “explaining” why he called his sworn “friend”. Judging by the numerous disapproving comments by supporters of Mr. Navalny, not all of his “explanatory” curriculum were satisfied ...

However, the negative assessments of Navalny’s call put up by his supporters are not the most exciting thing about the “non-living” oppositionist. 3 June The Zamoskvoretsky Court of Moscow recognized as legitimate the decision of the Ministry of Justice to revoke the registration of the “Progress Party” headed by Navalny. Bulk in an interview Interfax commented on the situation as follows:

Our reaction is calm, despite the fact that from the very beginning the law is on our side, and the court makes an absolutely unjust decision. We have already started re-registering the game three times in a similar situation, but still it was not registered. Our party remains in the form of a political entity: activists, structure, leaders of regional organizations, but we are going to the elections on the basis of RPR-Parnas within the framework of a democratic coalition, so we don’t need any license now.

Who has more gray-green wrappers, in the framework of the organization Navalny and goes to the polls. And if there are gray-green candy wrappers brought as a reward for the correct work “from there”, then is there any Russian license needed ...

Apparently, in order to draw new creative forces and fill with something strong the severity of the leaks about his stormy activity in the media, Alexey Anatolyevich decided, as it is called, to note his 39 birthday, which is not a childish thing. Bloggers on file sharing laid out the archive, which is the documents of correspondence of the secretary of the headquarters of Navalny, Ms. Litvinenko, with the event-agency “SP-groups”. If this correspondence is real, then the headquarters of Navalny is going to celebrate the birthday of his chief Alexei Anatolyevich in a big way: a banquet with tables in one of Moscow restaurants worth more than 1,4 million rubles. In addition, musicians from the “Leningrad” group were invited to the DR of the main fighter against corruption in Russia, who evaluated their performance as much as 4,5 million rubles. The show, as follows from the published correspondence, will have a zest in the form of striptease, DJ and saxophonist performances.

In the list of invitees: Maria Gaidar, Nikita Belykh, Dmitry Gudkov, Evgeny Roizman, Ksenia Sobchak, Mikhail Kasyanov, Ilya Yashin, Vladimir Ryzhkov and others. Portal Ридус writes that John Tefft, the US ambassador to Russia, was among those invited.

Particular attention is drawn to the fact that all this multi-million event is held on behalf of the so-called “Fund for the fight against corruption”, as evidenced by this document:

It would seem, well, this can not be - it is a dirty provocation ... But after a couple of days ago it might have seemed that the call to Navalny to Neverov is also someone’s “dirty hands” business. And it turned out that the call was ...

In general, as you can see, the work of the "non-living" is in full swing. As you can see, their fight against corruption is reaching new levels - moreover, those on which even those whom the “non-living” themselves were called the main “swindlers and thieves” yesterday suddenly become the addressees of their requests and requests ... And Tefft, of course, it is necessary to invite - without gifts, it should not come exactly ... And then what’s next to fight corruption? ..