3 2015 June
20
Vice-President of the Jewish Ukrainian Committee Edward Dolinsky said that the so-called State Commission of Ukraine in the city of Rovno intends to change the signs, which contain references to the involvement of representatives of the UPA in the mass extermination of the Jewish population during the Great Patriotic War. In particular, we are talking about a monument to residents of the village of Ostrozhets (Rivne region) tortured by the Nazis, on which the sign reports about the involvement of nationalist Ukrainian organizations in the massacres of militants. 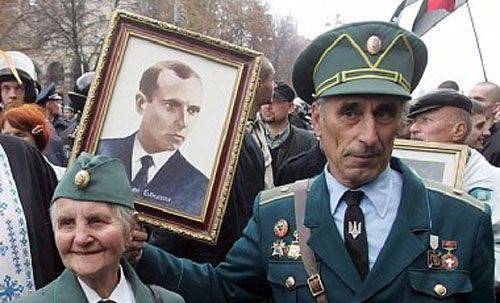 Eduard Dolinsky comments on the situation on his page in Facebook:
Shame and shame! So, on June 28 of 2015, the grand opening of five memorials built on the sites of the massacres of Jews in Western Ukraine is to take place. This is a pilot international project funded by the German government. Everything would be fine, but yesterday it became known that the state commission in Rovno, which must approve the inscription on the monument in Ostrozhts, refuses to do so.

Further, Dolinsky specifies which inscription is being discussed and describes the development of the situation:
They want to cut the inscription. "1941" They want to remove the phrase "that pleglie їm mestsevym services." There is a feeling that the commission in Lviv will also require this. I believe that this is not only a denial of one’s own storiesbut also Holocaust denial. They want to rewrite history! The same that was with the scoop, when they wrote "Soviet citizens". This is the result of these fucking laws and the silence of the Jewish community!

Our representatives attended the meeting. They were not allowed to speak, constantly interrupted. Deputy governor Danyluk and the head of the organization of veterans of the UPA tried especially hard. One of their main “arguments” was the participation of the Jews in Israel’s non-recognition of the Holodomor.

Recall that, according to the law recently enacted in Ukraine, all Ukrainian accomplices of the Nazis suddenly became known as "national heroes." At the same time, even those countries that suffered the most from the hands of Ukrainian Nazi punishers are trying to look at this law through their fingers. For example, Poland behaves.
Ctrl Enter
Noticed a mistake Highlight text and press. Ctrl + Enter
We are
"Army games 2015". Opening with our eyes. ReportageThe Ministry of Defense declassified the archives of the activities of the UPA during the Second World War
20 comments
Information
Dear reader, to leave comments on the publication, you must to register.