3 2015 June
93
The threats of the leaders of the Islamic State, both to all Shiites of the peninsula and to the Saudi royal family personally, are becoming more and more specific. Difficult times are beginning in the Middle East. So difficult that in ten years the political map of the region will most likely look quite different. 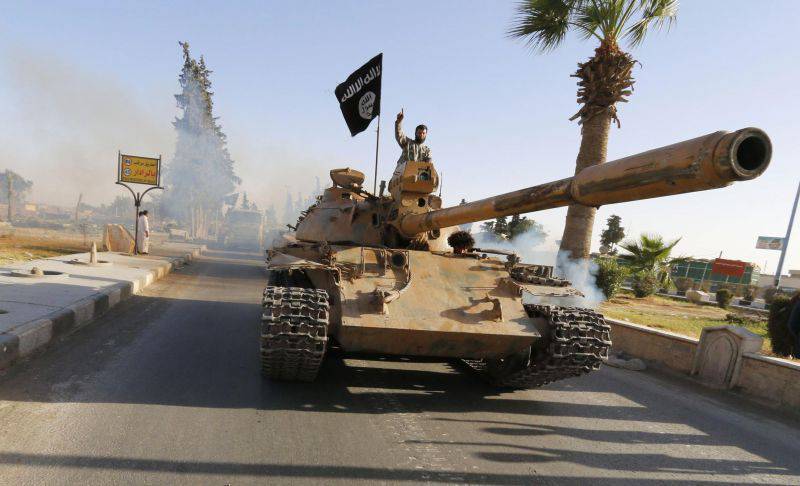 The logic of the new state is obvious: all the great and regional powers began with wars to unite territory and expansion to the outside world, biting off the neighbors of the most convenient pieces. Now it's the turn of the IG. The direction of expansion is also quite predictable. Saudi Arabia is a rich country with a developed infrastructure, access to the sea and huge oil reserves. Moreover, Iraq and Syria have been crushed to the ground during the years of the civil war, and logic is pushing the Islamists to move into new untouched territories. We should not forget about the holy places of Mecca and Medina, the possession of which will automatically give the IG authority in the eyes of many Muslims around the world. The ideological moment in such a war is extremely important.

Saudi Arabia is also a huge arsenal of all kinds of modern weapons. Here are just a few figures: ground forces have approximately a thousand tanks of which 442 M1 "Abrams", more than 5000 infantry fighting vehicles and armored personnel carriers of all modifications, more than 600 guns including MLRS. All arms of the armed forces are armed with several hundred aircraft and helicopters, while the missile forces have an unknown number of DF-3 and DF-21 missiles (range 1770 km).

Collectively, with the already captured army trophies of the armies of Syria and Iraq, all this will allow the Caliphate to wage a war of almost any size. If we add weapons from other countries of the region, which can also become potential victims of the IS, as well as combat experience and motivation, we will get one of the strongest armies in the world.

So for a combination of reasons, it is Saudi Arabia that is a desirable and relatively easy prey. Other options today are unlikely. Despite all the anti-Shiite statements, the campaign against the Shiite part of Iraq is fraught with problems, and neighboring Iran will not allow it, but the Iranians can look favorably on how the militants will go around - right to the borders of the Kingdom. The Saudis will find themselves in a very unpleasant situation: in the south their borders test the Yemenis for strength, in the north a young and aggressive state is about to invade. Is Saudi Arabia ready to seriously fight, and even on several fronts at once? There are big doubts. It is possible that the Kingdom will eventually be divided between the Caliphate, Yemen and Iran in one form or another, and the rest of the Gulf monarchies will have a difficult choice - either to submit to the IG, or to urgently find a sufficiently powerful patron who can protect them.

The Shiite territories of the former Iraq and Saudi Arabia have every chance either to directly join Iran or to leave under its protectorate. Yemen will probably also take a piece of it.

After the defeat of the Saudis, and possibly Qatar and Bahrain, the problem of new expansion will be before the IS. There are two main areas here - north and west. The northern direction provides for an attack on Kurdish territories, and then on Turkey. The Western hike includes a campaign against Jordan, Israel, followed by a trip to the Sinai Peninsula. Both directions promise rich booty from non-devastated territories and further growth of authority among Muslims all over the world.

Here before the Western countries and the moment of truth comes. Allow the fall of Israel, with the subsequent release of the IG to the Suez Canal, the Europeans can not, because the seizure of the Islamic State of Egypt will be a disaster of unprecedented proportions. Having destroyed the monuments of the ancient Egyptian civilization, the militants will continue their movement, conquering the weak countries of North Africa one by one.

For the United States, the evolving situation is beneficial from all sides. Saudi Arabia has the third largest foreign exchange reserves and is the third (along with other Gulf monarchies) holder of US government debt. No creditor - no debt. By the way, in the number of reserves and in the number of US treasury obligations before the Saudis, Japan and China go - for them their own war is also in store, but this is a topic for another conversation.

In the political sense, too, solid benefits. Washington needed a war of Europe and Russia, but if desired, it would suit the great war of Europe with the united Islamic Caliphate. If the IG approaches close to an attack on Turkey, Israel or Egypt, then the Europeans will have to enter the war not symbolically, but in full, which in scale will in fact become a new world war.

Russia, on the other hand, will also have pros and cons. The disadvantages are that Russia will finally be squeezed out from the Middle East, and it will have to urgently close and evacuate diplomatic and trade missions, as well as a naval base in Tartus. The danger of armed attacks in the North Caucasus and Central Asia is greater than ever. Few people now remember that the strategic goal of the militant attack on Dagestan in 1999 was the creation of a terrorist state in the areas from the Caspian Sea to the Black Sea. Today, this idea can be reanimated again under a new flag.

The advantages are that, before a truly terrible threat, Europeans can make concessions, even if temporary, on Ukraine and the Crimea. In response, the European Union may require Moscow to directly participate in the war against the IS on the territory of the Middle East. But do we need it?