Afghan opium production to increase by 61 this year 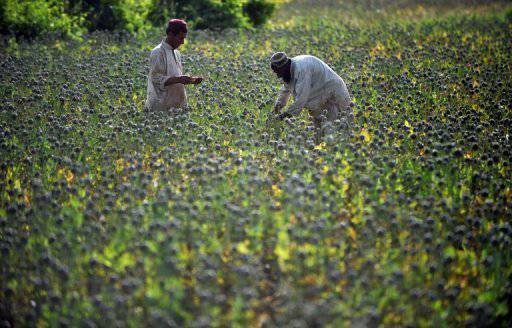 As the United Nations Organization said on Tuesday, opium production in Afghanistan, fueling the Taliban insurgency, will increase by almost two-thirds after the last crop hit the disease.


During the 10 years after the invasion led by the United States, Afghanistan supplies 90 percent of the world's illicit opium, which is the main income of the insurgency.

Given the significant increase in yields per hectare compared to last year, total opium production should increase by 61 percent.

The growth of land for opium production indicates the failure of NATO’s civilian partners, especially reconstruction teams, who failed to convince farmers to switch from poppy cultivation to alternative crops.

The UN report says that the value of dry opium this year has increased by 43 percent compared to 2010, and total agricultural income will grow by 133 percent, reaching 1.4 billion dollars, or 9 percent of Afghanistan’s GDP.

“If we add heroin production and transportation to this profit, then opium becomes a significant part of the Afghan economy, and provides substantial funding to the rebels, as well as fueling corruption,” the report says.

Of these 2 billions, he says, 10 percent went to the rebels, and about 20 percent to the peasants.

He says that the remaining 1.4 billion dollars are questionable, but as he believes, he is divided between the corrupt authorities and the crime. However, last year prices rose by 300 percent.

"Now the peasants will earn 1.4 billion ... the insurgents will have to leave about 700 millions, and how much the crime and corrupt authorities will earn, I think you can count them yourself," Lemay said.

Afghan authorities have been trying to clear the country of illicit opium production with the help of international allies since the Taliban in 2001 were removed from power.

“The total volume of treated hectares in 2011 year increased by 65 percent. However, the cleared areas represent only 3 percent of the total cultivated land, ”Lemayou quotes the head of UNODC, Yuri Fedotov.

“Although some progress has been made in some areas of the fight against drugs, the medium-term indicators of opium production are not positive,” he added.

We are in Yandex Zen
US expert community is trying to identify ways out of the Afghan impasse
11 comments
Information
Dear reader, to leave comments on the publication, you must to register.