The newest invisible destroyer will replace the three classes of ships 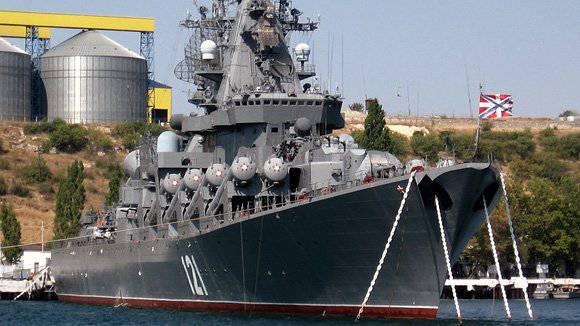 Plans to create a squadron destroyer project were first communicated to 19 on June 2009 of the year, it was then known from sources in the military that the tender for the new project would take place before the end of 2009 and most likely, research and development (R & D) would begin immediately. to create a new look of the projected ship. Design work was planned for three years. At the same time, it became known that the ship would become a multi-purpose and the main tasks assigned to it were to suppress the coastal defense before the landing and to fight the enemy’s surface ships, anti-submarine and anti-aircraft defense.

“At the moment, intensive work is underway to find and form the new look of the projected ship, the design and technical base for this ship is being assembled. The process of research and selection of technical solutions will last approximately 30-36 months, ”the specialist noted, he also clarified that while the ship does not have numbers and series, the new ship is a promising solution, a multi-purpose destroyer with a certain choice. weapons and ammunition. The project will receive the latest universal launchers with rocket ammunition, vertical launch of rocket weapons will provide firing at surface, underwater and ground targets of the enemy. Anti-aircraft defense of the new ship will make anti-aircraft complexes with missiles of various ranges.

11 March 2010, the media reported that the development of the new generation of the ship with the use of technology "Stealth" Russian experts have begun successfully.

At the end of June 2011, the USC Shipbuilding Company announced that it was already engaged in the project of a fifth-generation, ocean-going destroyer-class ship with a new nuclear power plant.

Commander-in-Chief of the Navy Fleet Russian Admiral Vladimir Vysotsky this summer confirmed information on the design of a new ship and added that the laying and construction of a multipurpose destroyer will be launched in mid-2012.

OJSC "United Shipbuilding Company" reported some data on the project:
The destroyer will have a speed of about 30 nodes, unlimited seaworthiness, with an average speed of 17 nodes the autonomous navigation distance will be 10000 miles.

The ship crew will be slightly smaller than usual on ships of this class; it is planned to increase the comfort of the interior. The ship will have a hangar for two anti-submarine helicopters.

Depending on the special tasks and the nuclear power plant, the displacement of the destroyer will range from nine to twelve thousand tons.
The entire ammunition, which includes: ship-to-ground cruise missiles to destroy ground targets, anti-ship missiles, torpedo missiles to destroy enemy submarines, anti-aircraft missiles of different ranges, is 90-130 combat units.

Anti-aircraft defense on the ship will be represented by anti-aircraft universal rocket-artillery complexes of the melee, it is precisely known that there will be an artillery installation of 152-mm caliber, consisting of several guns and will be able to hit enemy ground and surface objects with high-precision projectiles.

The squadron destroyer will be equipped with a new hydroacoustics complex for detecting mines, submarines and combat swimmers of the enemy.
A multipurpose destroyer, like other projects of new generations, will be equipped with a combat information and control system (CICS), which will provide the possibility of joint defense and control of ship armament of an entire naval group. Today, only the ships of the United States of America and their partners in the NATO bloc are provided with this opportunity.

The destroyer of the new project itself will be made almost imperceptible for the enemy radar using modern stealth technology. The invisibility and invisibility of the ship for the enemy will provide the design features of the ship's hull, specialized coating of hull elements and materials with high radio absorbing properties. Protection and survivability of the ship will be enhanced by the use of technological developments. Ecological safety has been improved, which is practically absent on all the ships of the Russian fleet created so far.
The price of a new multipurpose destroyer is approximate, it is approximately 70 billion rubles. Expected date of completion and launching 2016 year.

The fleet of Russia is to receive in the next 10-15 years about 16 ships of this project. These multipurpose destroyers will be able to replace the ships of three series. Due to the use of universal missile systems, it surpasses large anti-submarine ships (BOD), and the use of air defense systems of the new ship is left behind by the existing 1164 series of cruisers and destroyers, except for the Orlan project ships.

These ships are primarily needed to provide anti-submarine and anti-aircraft protection of heavy nuclear missile cruisers of the 1144 project, such as the Peter the Great TARKR.

Now in the Russian Navy there are 7 destroyers "Sarych", a series of 956, built in the Soviet Union at the end of 80, and it is not known how many of them can perform combat missions and go to sea. The destroyers are armed with the Mosquito anti-ship complex, the Uragan antiaircraft missile, the 130-mm AK-130 twin-gun system, two 533-mm torpedo tubes, two RBU-1000. Displacement -6500 tons, speed -33 knot, cruising range - 4500 miles. One of the main disadvantages of this project is the outdated boiler and turbine installation.

We are in Yandex Zen
Project 68-bis cruisers: the Sverdlovs' tasks in the post-war fleet of the USSR. Part of 3
"SEA BREEZE 2012" - press tour on the destroyer USS JASON DUNHAM
22 comments
Information
Dear reader, to leave comments on the publication, you must to register.