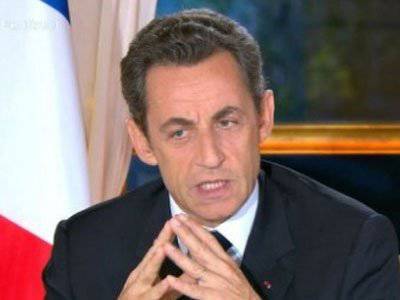 Washington considers Tbilisi a reliable ally, who proved this by participating in NATO operations in Afghanistan and Iraq. Therefore, the United States supported Georgia in its desire to join the Alliance. At the same time, the French president accused Moscow of “taking away” part of the territory of Georgia.


During his visit to Georgia, Nicolas Sarkozy, addressing the Georgian people, said that he was happy, since he could appeal to the independent people. Although after the end of the war, the wounds of the Georgian people had not yet healed, and thousands of people were forced to leave their homes.

According to the French president, part of the “Georgian territories was taken away. It is as painful as amputation of the limb; you feel this pain all the time. ” Sarkozy stressed that Russia, contrary to any strategic logic and own interests, not only left its armed forces in Abkhazia and South Ossetia, but even strengthened them.

The French president has publicly assured the Georgian people that France and all of Europe support the sovereignty, independence and territorial integrity of the Georgian state. In addition, according to Sarkozy, Georgia was subjected to "forced partition" and "separatism" was imposed on its people. It is not difficult to guess that the ground is being prepared for the future accusation of Russia of “dismembering” Georgia and Moscow’s support for the Ossetian and Abkhaz “separatists”.

Summing up the visit of the French president to Georgia on October 10, 7, Georgian leader Mikhail Saakashvili spoke to reporters and said: “France adopted Georgia, and if the French take up something, they will surely bring the matter to the end,” Radio Liberty reported . Since France is the “foster mother” of Georgia, then apparently the United States is the “foster father”?

During the trip, the French president presented Saakashvili with the highest award of France - the Order of the Legion of Honor, and the President of Georgia awarded Nicolas Sarkozy with the Order of the Victory named after St. George, who was handed "for his special contribution to the victories achieved for Georgia." Thus, Sarkozy thanked “for the special support” expressed in relation to the Georgian state, protection of the sovereignty of Georgia and “strong support of national interests”.

Saakashvili did not have time to rejoice at the words of Nicolas Sarkozy when another good news came from the United States for the current Georgian regime - the head of the United States delegation to the North Atlantic Alliance, Michael Turner, told Washington on October 9 that Washington would provide an action plan for NATO membership to the Georgian state.

According to him, “Georgia, which by its active participation in peacekeeping operations in Iraq and Afghanistan” provided the Alliance with great assistance, proved that it is “a reliable ally and guarantor of security”.

According to the American, the expansion of the North Atlantic Treaty Organization does not pose a danger to any state. On the contrary, it strengthens stability and security in all areas of activity. And already brought "historical successes ”in achieving stability and security, cooperation, the rule of law and other common goals in all countries of Western Europe, which is currently free and united. The mouth of an American would drink honey, especially the “security” and “stability” felt by the inhabitants of Iraq, fragmented Serbia, Afghanistan, swept by the fires of the Libyan war.

The American politician also called on all NATO member states to support the initiative of the United States and to simplify trade relations with Tbilisi. The United States itself plans to support granting Georgia an action plan for membership in the Alliance at the upcoming NATO Chicago Summit in 2012. It should be noted that at previous NATO summits that were held in Bucharest and Lisbon, Tbilisi did not provide an action plan for joining the Alliance, since, according to the leadership of the military-political bloc, Georgia did not fulfill all the requirements for democratic reforms in the country.

We are in Yandex Zen
Russia and Georgia: traps from "well-wishers"
NATO leads Saakashvili by the nose
69 comments
Information
Dear reader, to leave comments on the publication, you must to register.