The insight of the farm philosopher 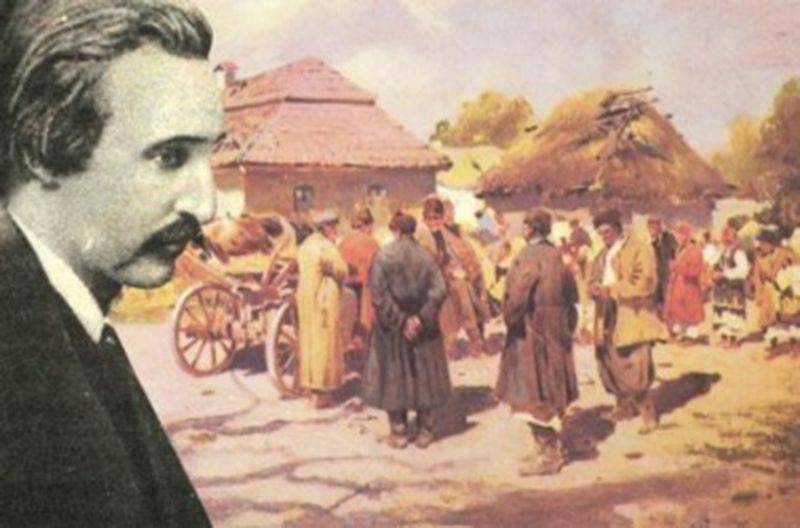 Until now, they are afraid to reprint it in full. Despite the fact that it was he who invented modern Ukrainian spelling and composed the first Ukrainian historical novel. Why doesn’t Kulish like our current inquisitors from culture? Independence!

A STRANGER AMONG OWN. To this bilious and keen-on-language writer is the best definition: his own among strangers, a foreigner among his own. On the one hand - an ardent Cossack and collector of folklore. On the other hand, his own most ruthless critic, who called all kobzars in a crowd “unclean and dark”, and their work - “pianica brekhodurniyuyu about people in Kozak”.

The same double was the origin of Kulish. He considered himself an aristocrat. But only his grandfather had some kind of suspicious nobility. And already the father of Panteleimon lost the right to be numbered among the noble class and enrolled in the usual Cossacks, despite the fact that he owned a clan farm in the Chernigov province, and even serfs. Due to the lack of evidence of noble origin, Kulish was expelled from Kiev University of St. Vladimir At the time of Nicholas I, only noble children had the right to study there.

The story with the exception of Kulish from the second year is rather dark. Apparently, entering his studies, he called himself a nobleman and promised to provide relevant documents in the hope that the administration would forget about it. But the administration didn’t forget, and the young semi-clerk-half-pride went on free bread, having already emerged in the capital of the Russian Empire as a senior teacher of a gymnasium and at the same time a teacher of the Russian language at St. Petersburg University. How they took him there remains a mystery. After all, Kulish himself did not have not only higher education, but also secondary education. He managed to finish only five classes of the gymnasium in the provincial Nizhyn, leaving it either because of a lack of funds, or because of a lack of will to deal with the boredom that was brought about by compulsory subjects. 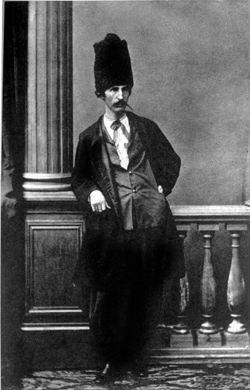 GENIUS WITHOUT A DIPLOMA. Ukraine is indebted for the lack of knowledge of the hero of this article to the simplified spelling he invented. Before the great spelling reform, Pan'ka Kulish (as his friends most often called him), Ukrainians used all-Russian spelling, which remained from the times of Kievan Rus. They also used "yati", "ery", did not know the apostrophe. Kulish it all seemed very difficult, and he proposed the so-called "phonetic" spelling. According to the principle: "writeable, yak chuєmo." How, using it, you can make mistakes - the mind is incomprehensible! Nevertheless, even today's primitive "kulishovka", created specifically for the education of backward peasants, is too tough for many current students.

Until spring 1847, Kulish was unusually lucky. At Kiev University, he met Mikhail Maximovich, a professor of Russian literature. Brought together their insanity in Ukrainian folklore. Kulish showed the professor a self-made collection of songs that he recorded from his mother. Mother, by the way, absolutely could not read. Therefore, the collection turned out the most that neither is genuine, truly popular, free from any book influences.

Professor Maksimovich brought a dropout folklorist with an inspector of schools of the Kiev school district Yuzefovich. Recalling later this useful acquaintance, Panteleimon wrote that Yuzefovich took care of him surprisingly: he supplied books and manuscripts, helped to print the historical novel “Mikhailo Charnyshenko or Little Russia eighty years ago” at the university printing house, and even provided a trip to Kiev gubernia for the official account. Kulish traveled along it intermittently for two years. The result of the scientific expedition was a collection of folk songs and legends "Notes on South Russia". The young author has acquired a literary name.

But in his declining years, Kulish responded about those blessed times with sarcasm:

It was clearly written in the peak of Shevchenko and his poem "The Dream" with the famous lines about Peter the Great, who "roped our Ukraine" and Catherine II, who, according to Tarasova's version, "finished the orphan widow." 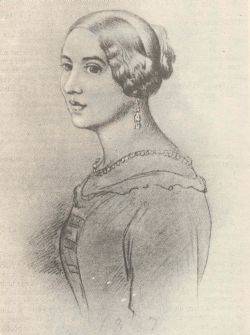 The streak of luck ended when the Third Division, the political police of Nicholas I, covered the Cyril and Methodius Brotherhood in Kiev, which planned the transformation of the Russian Empire into a federation of Slavic republics. The investigation revealed that Kulish was in correspondence with the majority of fraternity members. And not only was he, but also signed his messages with the title "hetman".

At all times, gendarmes lacked a sense of humor. A collection of intelligent talkers, they took for a deeply disguised underground center. Kulish was arrested in Warsaw at that very moment when, together with his young wife, he was going abroad to sip European air and gain tourist impressions. Instead, Berlin and Prague had to be in St. Petersburg during interrogation with the chief of staff of the gendarme corps, General Dubbelt. The question of the general: "Is it true that you intended to be a Ukrainian hetman?" Kulish remembered for a lifetime.

A silly joke cost him two months in a fortress during the investigation and exile in Tula. It was a purely symbolic punishment. In the town near Moscow, the Little Russian writer edited "Tula provincial Gazette" and lived for a cadre with the governor Kozodoev, which in his autobiography said: "Man as a man." There he became friends with the local gendarme captain Gusev and even moved with his wife to his mansion, where the policeman and the exile together were chasing tea. So in the old days political criminals intertwined in Russia and those who were obliged to look after them!

Tula link lasted three years. And then Nicholas I forgave Kulish. Well-wishers showed the king drawings failed "hetman." The emperor was deeply moved and immediately allowed the exiled editor to return to Petersburg. True, the ban on the publication of Kulish was not lifted. But he immediately found a way out, filling Petersburg journals with his translations of foreign authors under various pseudonyms.

The death of Nicholas I and the arrival of the liberal Aleksandrovskie time restored Kulish’s former freedom. The beginning of 60-s caught him a venerable writer. By this time, he published two versions of the Black Rada novel (in Russian and Ukrainian), edited and published the collected works of Gogol, received three thousand rubles for it (10 percent of profit), and, together with Nikolay Kostomarov, published the first Ukrainian-language magazine "Basis," brought to mind the manuscripts of Maria Markovich, who escaped from her husband, who wrote under the pseudonym Marco Vovchok ...

Kulish was considered the head of the “Ukrainian” party, an ardent nationalist, and suddenly he burns everything he worshiped and worships everything he burned. One after another, no longer novels from the writer's pen, but historical research based on documentary material — the three-volume History of the Reunification of Russia, Malyovanna Gaydamachchina and Disappearance of Little Russia from Poland. From now on, Kulish does not see anything progressive in the Zaporizhzhya Cossacks, which he chanted in his youth. Now the Cossacks for him are just bandits and murderers. They did not dream of any state. Their ideal was to drink and rob. The only progressive force in Ukraine, which ended both the Tatar raids and the Lyashian domination, yesterday’s Kazakophil recognizes the Russian Empire.

There is nothing surprising that with such thoughts even in independent Ukraine Kulish remains a semi-forbidden author. Black Rada is included in the school curriculum. But already the preface to it, where the author speaks about the political insignificance of hetmans, is not shown to students. As for the historical writings of Kulish, they are simply afraid to publish. 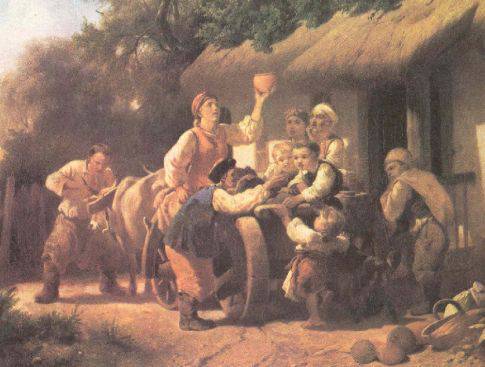 AUTHOR OF THE TERM "FARMING"

None of the Ukrainian classics spoke such harsh and impartial truths as Kulish to their fellow countrymen. In the treatise "Farm Philosophy" he wrote: "We were overwhelmed with Tatar's lacks of money and methods, if the Tatars, in their midst, beat us with the beatings and smothered them." 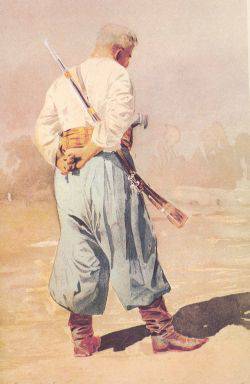 Kulish was the first to unmask Ukrainian historical myths soaked in cheap narcissism. How much ink has been transferred to praise the Kiev-Mohyla Academy! What kind of sanctuary of science it just did not describe. And the demanding author of the “Khutor's Philosophy” issued a derogatory sentence to this provincial educational institution on the outskirts of Europe: “Mohyla Academy did not give us a wonderful miraculous talent”. And try to argue with him! After all, Skovoroda and Feofan Prokopovich, the most famous graduates of Mogilyanka, are not included in the list of world-famous scientists. Both of them are just well-read apprentices of Western philosophers who have not created the original ideological systems — stars of a provincial scale.

Even Bohdan Khmelnytsky Kulish calls "the Ukrainian-Polish Batu," remembering "zhahlive vinischennya people podіbne before scho on us seized of the Tatars in cholі of Batiєm that Yogo nastupnikami and Zgoda on cholі of Bogdan i Yurієm Khmelnytskyi". According to the memoirs of the 17th century, he well knew the reverse side of the “national liberation war” - how Bogdan paid his countrymen with the Crimean allies, allowing them to collect yasyr in the villages.

Kulish seemed to have a premonition what the nonsense of his fellow romantics would lead to in the 20th century. Having repaid the youthful idealization of the Cossacks, in his mature years he was able to debunk the phantoms that he himself had engendered with Shevchenko and Kostomarov in the era of the Cyril and Methodius Brotherhood.

Throughout all the years after 1991 in Ukraine, they only do what they are looking for a “national idea”. But she has long been! She was formulated by Kulish in his later poem "The National Ideal". First, he describes the collapse of United Russia after the invasion of Batu:

Moscow Russia, according to Kulish, managed to preserve the spiritual heritage of the dead Russia of Kiev. It was there that the migration of the Slavic population from the Kiev region took place. And he is right - the carriers of ancient Russian culture moved precisely under the protection of the Moscow princes. And then came the period of Peter the Great's Petersburg Empire. For the author of the poem, this is a deeply progressive state mechanism, in contrast to the hetman civil strife of the Ruins period:

Kulish understands that only the empire ensured the prosperity and self-esteem of the Ukrainian people. Only thanks to her and her victories he was able to settle in the territory of the defeated Crimean Khanate. And in the future, the author of the “National Ideal” sees the renewed triune Slavic empire:

Unlike Shevchenko, who knew nothing about the future, except for the banal conviction that “be blue and mother,” Kulish had a very definite social and political ideal, which he preached in his poetry.