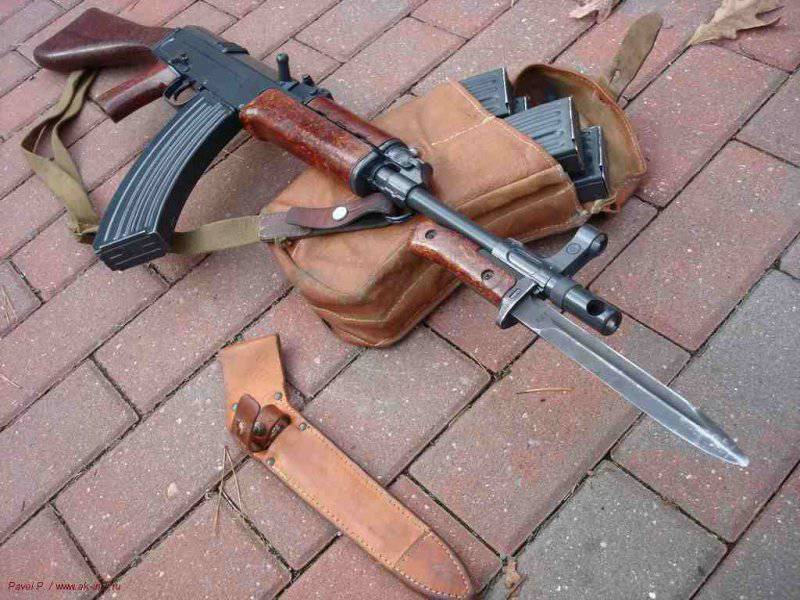 At a recent meeting of the General Staff, a positive decision was taken to leave the bayonet in the armament of the army. Questions about writing off this kind of cold weapons Began to be considered after the US defense department made a landmark decision to abandon the use of the knife-bayonet.

As for the idea of ​​leaving the bayonet in the “ranks”, there were many who spoke about the existing military and those who were in reserve or on deserved rest. Someone claimed that a bayonet is a truly formidable weapon that can always be saved by a fighter, even if the ammunition runs out. In addition, the bayonet, according to his supporters, is indispensable in melee, even when the enemy is equipped with a bulletproof vest. A bayonet can easily find places that are not protected: the neck, arms and legs of a fighter. The adherents of the idea that even the new machine gun, which will replace the greatest creation of weapon thought, the AK-74 machine gun, be equipped with a bayonet-knife, remind that this cold weapon also has a scabbard, in combination with which it can turn into nippers , and in a saw, and in a hammer. With the help of the knife bayonet, you can also set fire to matches! And how easy it is with his help to open a can of meat on a halt ...

However, in our country there are many opponents of the idea of ​​extending the life of a bayonet. These people declare that in modern combat, where digital technologies come to the fore, the use of progressive means of warfare and other technical innovations. In this situation, the bayonet becomes more like a certain amulet of the last century, which is unlikely to be able to provide real practical help.

In general, as is usually the case, the decision was made at the highest level, and this decision has some pitfalls.

Of course, a bayonet can be called a real symbol of the army of recent years, a kind of artifact to which every self-respecting fighter treated and treats with real pietus. However, one should not forget that time has the ability to run, and with time man changes, his life activity, world views, ways to protect himself.

In the situation with the debate about the bayonet, we can say that he became a hostage of his time. If you try to “transfer” even the closest to your heart weapons from one era to another, then on the battlefields the Russian army must still move exclusively on horseback and on foot.

However, the decision in Russia regarding rearmament, as is often the case, is somewhat half-hearted: AK-74, we are said to have too much, and we will not use them, but we will leave the bayonets-knives useful. The logic is at least strange!

Regarding whether to leave or not to leave a bayonet, the controversy went beyond the ocean. The Americans decided that their knight-bayonets would not be useful to their soldiers and supplied the firearms with an additional five-shot quick-fire gantry pad. But about the melee of American fighters are taught not to forget. From the spring of this year, after the US military had to abandon the knife-bayonet, the soldiers were trained in close combat with all that was at hand: stones, sticks, and so on.

However, the Marines did not express a desire to abandon the bayonet, although they also used this type of knives for the last time in the American-Vietnamese war. Representatives of the command of the forces of the marines say that the ability to handle a bayonet can be useful to soldiers in current wars - in the same Afghanistan.

In the new American military stories There are cases when Captain Millett was awarded the Medal of Honor for destroying an enemy firing point at 180 for skillful use of a bayonet.

It should be recalled that the bayonet for AK-74 (the product "6х5") was used in the Russian army during the last 22 years. During this time, it managed to appear its new modification for the Nikonov machine gun (bayonet-knife with horizontal attachment to the trunk of AN-94). Russian fighters continue to be trained in hand-to-hand combat with the use of a bayonet and machine gun butt. For general physical training this is not bad. But whether a bayonet is needed in all army units without exception today is an open question.

We are in Yandex Zen
Combat Knives (Foreign Combat Knives) Part of 2
Folding knife anatomy
41 comment
Information
Dear reader, to leave comments on the publication, you must to register.