Unusual tanks of Russia and the USSR. BT IS 1936 year

October 13 2011
2
Tanks BT series, built in series in the 30s of the last century, as you know, were designed on the basis of the Christie 1930 machine by the American engineer Walter Christie, acquired by the USSR, since the domestic production of tanks in our country was at a rather low level in these years compared with global manufacturers such as England, France and the United States of America. Having high speed characteristics, this tank successfully fit into the military doctrine of a deep breakthrough that prevailed at that time in the country's top military leadership.


As sang in one of the songs of the time:
"And in enemy land, we will crush the enemy
Little blood, a mighty blow ... "

We must pay tribute to the engineer Walter Christie, his tank turned out really fast, but he could develop high speed only on roads and solid ground, but the fighting, as a rule, is not carried out on the roads. In the event of a deeply echeloned enemy defense, with a firmly and well-established enemy, before the attack of the main units, artillery preparation is usually carried out, which turns the area into a "lunar surface", and in such a "landscape design" tank formations with the support of infantry had to go into the breakthrough. This is where the advantage of BT tanks, which seemed to give them high speed and maneuverability, was kept to a minimum. As a light infantry support tank, he could not perform such tasks. This did not suit many military engineers and designers. It was necessary to develop and create not only a high-speed and maneuverable tank, but also having high maneuverability. One of such tanks was designed by a talented self-taught engineer, military technician 2-rank N.F. Tsyganov was to become a BT-IS tank (IS-Joseph Stalin).

Work on the creation of this tank began at the end of 1935, a group of engineers led by N.F. Tsyganov, on behalf of the commander of the UVO I.E. Yakira As a result of painstaking and hard work, in April 1935, drawings of the new machine, BT-2 IC, as well as its model on the scale of 1: 5, were developed. According to calculations N.F. The Gypsy tank had to reach a speed of more than 100 km / h. It was incredible for that time, to have a small (not more than 6 meters) turning radius and a smooth ride. The main changes affected the chassis and armor booking, the weapons were planned to remain the same. The main feature of the car was equipping with three pairs of leading rollers, new driving wheels of the tracked propulsion unit and completely modified suspension elements. It is also worth mentioning the installation of additional fuel tanks on the tank, which significantly increased the power reserve. In the summer of 1936, the testing of the new machine began, where it showed excellent results and surpassed serial samples by five (!) Times. People's Commissar of Defense K.E. Voroshilov ordered the continuation of work on the project BT-2 IS. However, the leadership of the Kharkov Locomotive Plant, where the project was carried out, sabotaged its progress in every possible way, and soon all work on it was stopped. 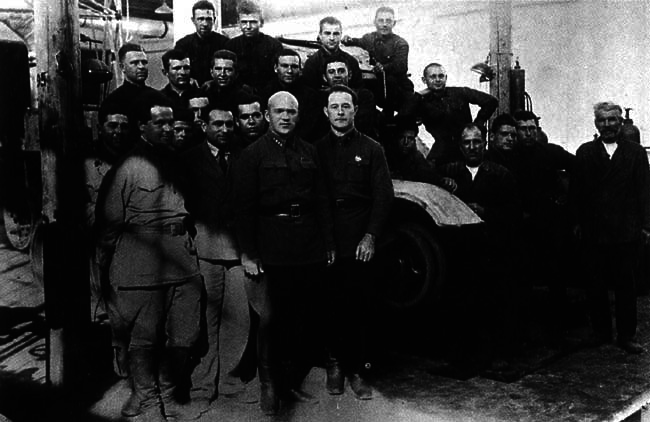 N.F. Tsyganov far left, while working on the project 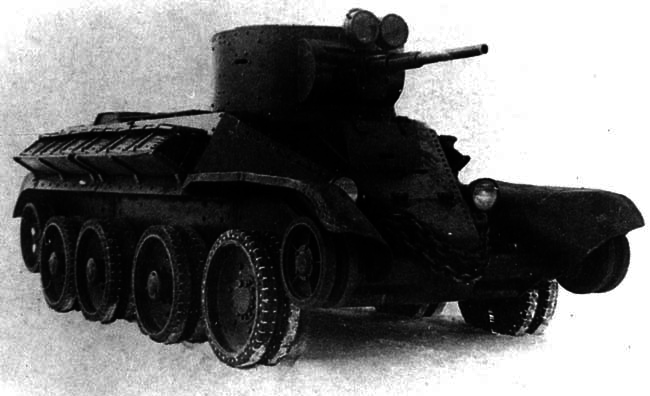 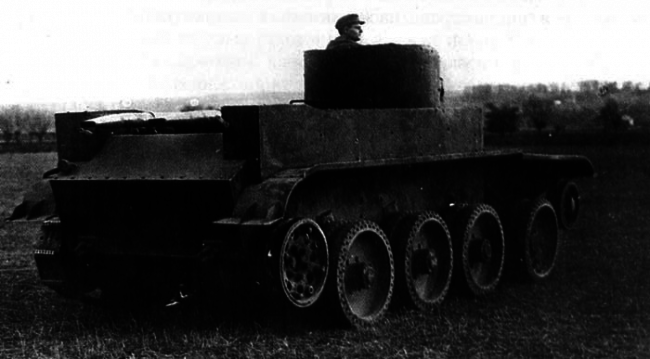 But soon N.F. Tsyganov returned to the idea of ​​increasing the maneuverability of the BT series of tanks, and at the beginning of 1936, work began on a new project, BT-5 IS. As part of this project, it was planned to change the undercarriage of the new BT-5 tank, as well as the BT-2 IS, to equip it with three pairs of driving wheels for better maneuverability, increase the power reserve by installing an additional fuel tank in the rear part of the vehicle and Increase body bookings. What was done by the fall of 1936, all on the same KhPZ. On tests, the car developed the speed of 80 km per hour on wheels on hard ground, easily overcome lifting more than 23 °, the estimated cruising range, thanks to additional tanks of more than 600 liters, was 260 and 450 km with tracked and wheeled movement, respectively. 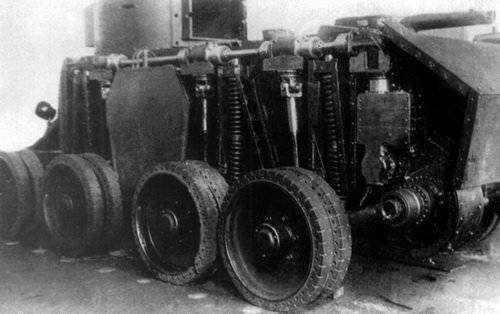 But again, the internal intrigues and the reluctance of the KhPZ management to improve the production tanks led to the fact that the BT-5 project did not receive IP further development. N.F. Tsyganov wrote a letter in which he described the situation around his project, here are a few lines of it: “The pest Firsov, the former head of the design bureau at the KhPZ plant, where it was transferred by the pest Neiman, the former chief of Spetsmashrestt, at the plant number 48 (Kharkov ) where those. the director was the Simsky pest-fascist, who dragged fascist Gakkel to plant No. 48 and put him in charge of the production of BT-IS. ... Farmanyants - Deputy Head of 8 th Chapter. Exercise NKOP tried to disrupt the release of BT-IS ". After this letter, work on the project was continued, and by the end of 1936 of the year, 10 BT-IS machines were manufactured on the basis of the BT light tank. In March, the 1937 of the year, the vehicles entered military tests, during which more than 1500 km was completed, and here the BT-5 IS tank showed good results. The machine remained mobile even if one of the tracks was damaged and two rollers were lost. 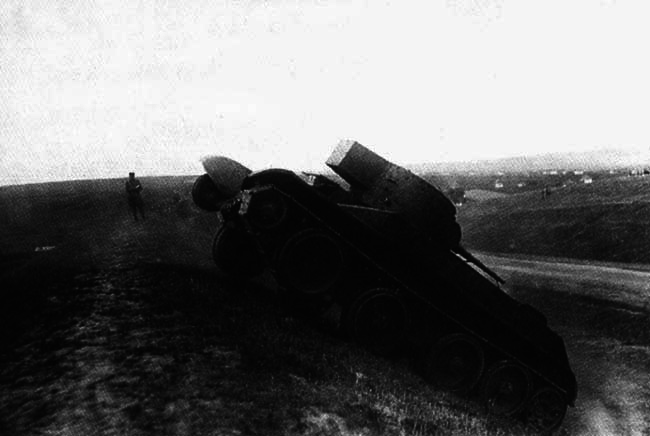 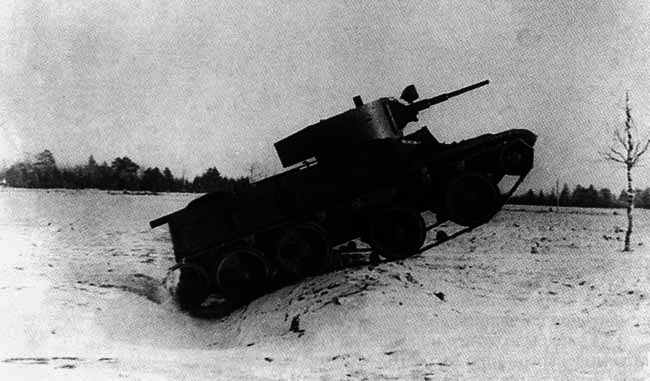 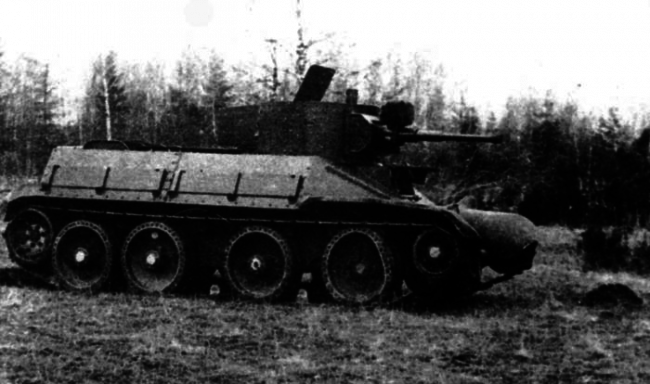 According to the commission, which monitored the test, the BT-5 IS tank should be put into service. G.G. Bokis, at that time the head of the ABTU RKKA, issued an order: "... I order the Kharkov Steam Building Plant to manufacture five cars during the 1937 year, to eliminate the deficiencies identified during the military tests for further launching into mass production." Work was also carried out to install an improved chassis on the new BT-7 tank, but at the beginning of the 1938 year, N.F. Tsyganov was arrested, and all work on the project was curtailed.