Duda - Poroshenko: With whom to meet? To meet you?..

28 May 2015
33
The Kaczynski family takes revenge on the presidential elections in Poland. If in 2010, Yaroslav Kaczynski failed to take advantage of the death of his brother near Smolensk and the grief of the Poles to become the Polish president, then in 2015, this person celebrates his victory. And although the Polish president was not himself, but the representative of his Law and Justice party, Andrzej Duda, it is Kaczynski who can be considered the main winner of the election marathon.


According to preliminary estimates of the Polish Election Commission, Duda was ahead of the current Polish President Komorowski, gaining about 52%. As soon as such a result was voiced in Poland, there was a long pause in the informational air of the opposition forces, to which Duda belonged. 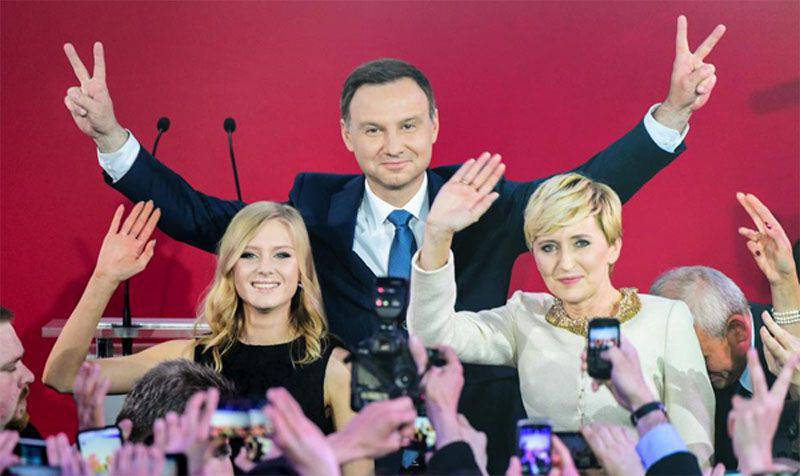 The impression was that “Law and Justice” was somewhat discouraged by the victory of its representative in the presidential election. The fact is that Duda was almost openly positioned as a technical candidate, who was sent by Kaczynski to the polls only in order to assess the activity of opposition sentiments in Polish society and the degree of dissatisfaction with Komorowski’s policies. A sort of reconnaissance in force. In the end, it turned out that reconnaissance in battle turned into, if not unconditional, then a completely weighty victory of Duda, or more precisely, the victory of Kaczynski over his old political opponent Bronislav Komorowski.

It just so happened that the president of "the most democratic country in Europe" Petro Poroshenko gathered in Warsaw on 27 in May. Formal reason - visiting the final match of the European Football League between the Spanish “Seville” and the Ukrainian “Dnipro”. In fact, Poroshenko made a bet that he could be the first head of a foreign state, who would personally greet the elected Polish president, Andrzej Dudu.

News that Poroshenko intends to meet with Duda in Warsaw, citing the press service of the ukropresident himself, trumpeted the Ukrainian media. At the same time, the Ukrainian media drew a rosy picture of how the newly Polish leader warmly welcomed the “collector of Ukrainian lands”, which proves the full support of Peter Alekseevich and all of Ukraine.

However, Poroshenko’s entourage and, above all, Poroshenko himself experienced a feeling similar to the one that a person experiences when a tub of cold water is poured over his head. In the case of Poroshenko, it is possible that not just water, or even a tub, but more capacity ... Mr. President of Ukraine, the press office of the President-elect of Poland said that the meeting with Poroshenko was not on the Duda’s calendar. At the same time, the press service of Duda added that Poroshenko should not be upset, as the meeting was “postponed for an indefinite period, but not canceled.” Well, in general, everything is the same as with the European Union "abolition" of visas for Ukraine: you do not worry, Peter, we will ever cancel a visa-free regime, but neither today, nor tomorrow, nor even the day after tomorrow, such a cancellation in our calendar does not appear ...

The reluctance of the elected president of Poland to meet with the president of Ukraine is, in principle, understandable. PR of Duda, who built his entire election campaign on overt populism and conflicting promises, which were estimated at about 83 billion euros in Poland, decided that the first photo of Duda with the head of a foreign state should be, by and large, anyone , but not Poroshenko ... Anyone from the main creditors of Poland, but not the Kiev beggar. Three or four weeks ago, Duda, from the candidate's rostrum, called on the “civilized world” to help Ukraine. weapons. But then Duda was just a candidate ... Komorowski, by the way, didn’t just call for the same, but quietly sent weapons to Ukraine (at least Polish armaments were repeatedly highlighted in the Donbass as part of Ukrainian nationalist battalions). This weapon was lit up, by the way, along with Polish mercenaries, whom Edward Basurin, Deputy Commander of the Ministry of Defense of the DPR, called representatives of the Polish private military company (PMC).

Now Duda is the elected president, and, even considering the frankly Russophobic position of his chief Kaczynski, he is well aware that today the steps and words need to be verified more carefully.

This is what the representative of his headquarters, Krzysztof Schersky, says, commenting on the “impossibility” of Duda’s meeting with Poroshenko’s meetings and negotiations:
Of course, we receive congratulations from around the world, invitations and suggestions for conversations, but the newly elected president is now in a transitional period, and we will organize his conversations in a certain order, and not by chance.

It should be noted that while Duda has not officially entered the presidential post in Poland, he is a deputy of the European Parliament, and, apparently, it is in Brussels that he will go instead of communicating with Poroshenko. This was soon confirmed by the Ukrainian news agencies:
A previously scheduled meeting with Andrzej Duda will not happen. This decision was made because of the many responsibilities of the newly elected president and, probably, because of the need to go to Brussels.

Numerous duties are, apparently, a petition addressed to the EU and assurances that it will not turn away from the "right course".

Obviously, DU will receive the Central Office from Brussels regarding which policy to send to the Polish leadership before the country's parliamentary elections.

Of course, Duda is not at all the politician from whom it is necessary to expect a qualitative change in contacts with Russia. Not that he is not so much because he represents the party of Jaroslaw Kaczynski, but because in present-day Poland, by definition, a pro-Russian politician cannot come to power one iota. Poland for a long time, sorry for the somewhat clumsy word, is “positioned” as one of the main anti-Russian forces in the eastern part of the European Union, and therefore any of its president is a person who, in any case, will be involved in state policy within the framework of this concept.

Another thing is that the attitude of Warsaw to Kiev may turn out to be revised. The reason is that Duda, although he presented himself essentially a technical candidate, was remembered in Poland as rhetoric, according to which he would take all measures to put pressure on Ukraine in terms of repealing the law on heroization of the UPA criminals. By the way, some Polish blogs and the media immediately appeared “compromising” on Dudu, which stated that Andrzej Duda is a descendant of Bandera himself - a grandson Michal (Mihailo) Dudaknown for belonging to the UPA and the Roland battalion. 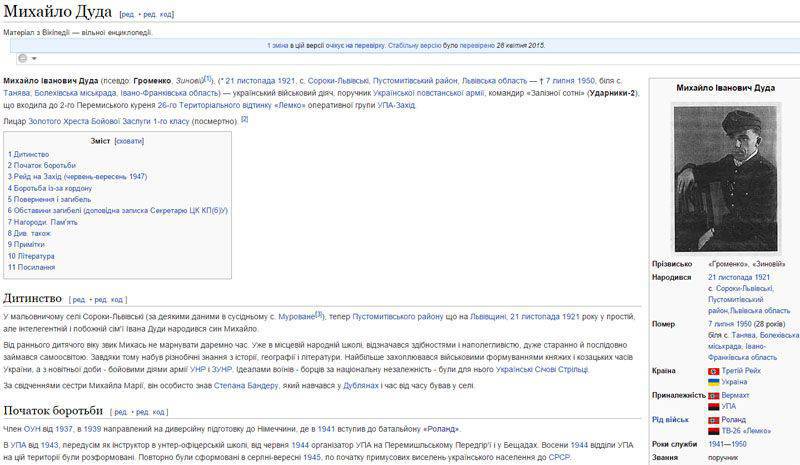 Duda himself hurried to refute this information, called it “complete nonsense”, and noting that his grandfather, Alois Duda, was engaged in the fur trade and had nothing to do with the UPA and could not have it. However, the “complete nonsense” of the media now pushes Dudu even harder to express himself in relation to those laws of the neighboring state, which offend the memory of tens of thousands of Poles, who were destroyed by UPA fighters. If Duda behaves like Komorowski - amorphously and sluggishly - then the media will again have a reason to say that Duda keeps silence for a reason, as well as a reason to continue writing the “genealogical tree” of the Polish president at its discretion.

But Poroshenko, meanwhile, had to go into standby mode (with a box of chocolates? ..) - suddenly he would invite ... But they didn’t invite me, and Pyotr Alekseevich decided that there was no sense in going to Warsaw to just watch football. What kind of football is there when Duda Poroshenko fired himself ...

Ctrl Enter
Noticed oshЫbku Highlight text and press. Ctrl + Enter
We are
Polish claims to Ukraine. Will Warsaw decide to “bite off” Galicia?Under whose tune dancing Duda
33 comments
Information
Dear reader, to leave comments on the publication, you must to register.