Is an “orange” revolution possible in the USA? 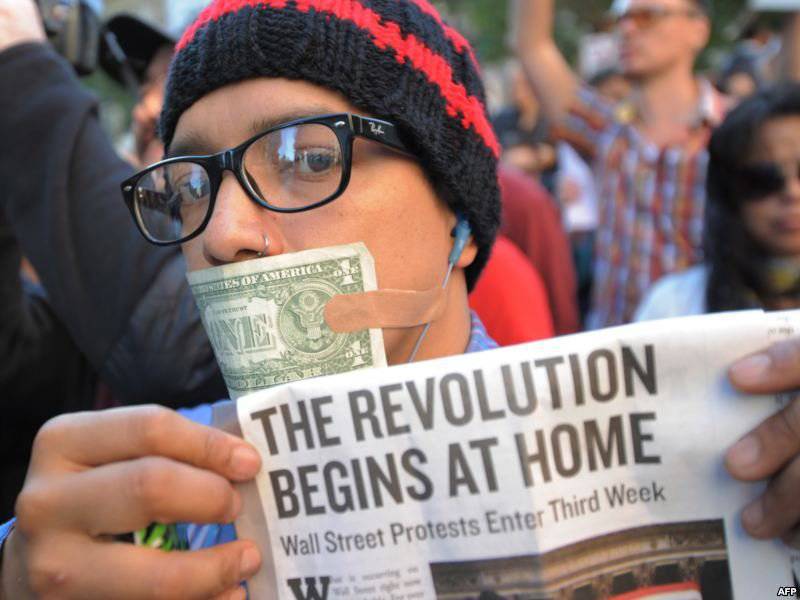 A wave of revolutionary sentiment, social tension and active protest against the actions of the authorities has reached the United States. A few months ago, with all due respect to the democratically-minded citizens of the United States, it didn’t even appear that on the territory of this state, personifying economic, political and military power, very similar to the recent Tunisian or Egyptian events would begin.

A wave of popular anger initially around 3's weeks ago spilled onto the streets of the financial capital of the United States (and the whole world) - New York. Most young people were holding posters calling for "Borrow Wall Street." At that time, the number of protesters did not exceed a few hundred people who resented the instability of the financial system of the United States, in fact, quite peacefully. Since the time of the first protest, the protest movement has managed to grow to large-scale actions in most states of the country. Major marches of disagreement with the financial policies of the American authorities are held not only in New York, but also in Boston, Washington, Tampa and other US cities. They are protesting both in large cities and in small towns. Many prefer not to engage in clashes with the police, choosing a silent protest. Others, on the contrary, try to attract attention to themselves and arrange a colorful performance about how ordinary Americans bury their “American dream”.

Participants who have either lost their job, or cannot pay for loans or pay for college, are supported even by those who have already achieved a lot in life. Even retirees and retired military personnel are taking to the streets of American cities in order to provide all possible assistance to the protesters.

The world is gradually turning its gaze to those who express dissatisfaction with the corporate conspiracy of the "golden interest" of those in power in the United States. Recently, the protest movement gained one very influential supporter. They became none other than George Soros. Few could have expected him to be among the sympathizers of the protesters. Soros said that, in principle, he understood the indignation of ordinary Americans, because the principles of the US banking system have long ceased to express the interests of all Americans without exception. Top managers of the most important corporations set themselves huge salaries, while the average US citizen is becoming increasingly impoverished. The word “impoverished” sounds, of course, too harshly, because compared to the same “impoverished” Americans, many citizens of other countries of the world are living much worse. But the downward trend in real income in the United States should not be denied.

Of course, Soros cannot be suspected of unexpected sympathy for the poor. But how then to interpret his words? Perhaps, even in Soros, as they say, boiling. Such a reaction on his part suggests that the US financial system today is more like that cart from Krylov's fable. Each designated financial sector representative is trying to earn money by reducing profits in other financial sectors. Banks "tighten" the mass of currency and do not burn with the desire to let it go into production and implementation of social guarantees. The entire money supply in the United States is increasingly becoming like a mountain of ordinary cut paper, which is about to flare and turn into ashes. In this regard, the printing press is no longer able to cope with the load that will keep the US economy afloat. Even among high-ranking financiers, disagreements arise over who has priority in the circulation of cash. It turns out that the very “hard capitalists” are trying to divide the skin of an unkilled sheep.

Understanding that neither the authorities nor the financial structures in the United States know what to do to stabilize the economic situation, ordinary Americans go to protest rallies. Social networks as a single information environment do their work. More recently, Barack Obama himself said that he was pleased with the way new cybertechnologies allow democratizing the population of North African countries. And now, perhaps, he himself is holding his head. He understands that these same cyber technologies are starting to play against him. In an interview with one of the American channels, the US president even stated that he considers himself a failure. He said that he failed to meet the expectations of the Americans, in fact, in none of the questions raised during the election campaign. Well, if the president himself believes that his card is a bit, then what can be said about ordinary US citizens.

Hunting for terrorist witches annually pumps out more than 120 billion dollars from the US budget. Billions go to “help” puppet regimes in Europe (Kosovo, Georgia), in Asia (Iraq, Afghanistan) and in the Middle East. Money that could well become a guarantee of economic stability not only in the United States, but throughout the world, goes to extremely dubious needs. Often, the American leadership seems to be simply unaware of the obvious thing: it’s impossible to spend as much as it was possible to do 10 years ago! Such expenses are not only not justified, they are just fatal.

Already today, due to unreasonable economic policy in the United States, the unemployment rate has officially exceeded the 9% bar. Beyond the poverty line in the United States, more than 45 million people already live now. These are truly colossal values ​​for the state, which was perceived and is still perceived in the world as a standard of living in prosperity.

In this situation, the revolutionary mood in the United States is more than understandable. People refuse to heed the words of President Obama about the need to help the "fraternal" Afghan army in the fight against extremists, taking funds from the social sphere and reducing benefits in the United States. People refuse to believe Obama's promises that the Twist economic policy will bring the American financial system out of a prolonged peak. People rallied against the total superiority of the "golden percentage of Wall Street" over all other US citizens.

Against the background of a sharply aggravated conflict within the United States, some Russian political scientists say that this very “orange” revolution, which the United States has always advocated, may well threaten this country. And if so, then it will be a bitter irony of the American destiny - they stepped on an abandoned rake with all the ensuing consequences.

And this revolution no longer looks absurd. 99% dissatisfied with 1% of those who have closed their offices on Wall Street and deciding on the fate of those same 99 percent - this is the classic basis for a social surge.

We are in Yandex Zen
Clintons and Wall Street
List of destroyed the largest and most high-tech enterprises
26 comments
Information
Dear reader, to leave comments on the publication, you must to register.