26 May 2015
17
The bill passed last week by the Ukrainian Verkhovna Rada on the actual withdrawal of Ukraine from a number of international agreements to protect the rights and freedoms of its citizens living in the Donbass made a lot of noise. Explanatory note to the document reveals the essence of this paper. The “explanatory note” states that during the “anti-terrorist operation in certain areas of the Donetsk and Lugansk regions” the Verkhovna Rada adopts a law that gives Ukraine the right to withdraw from the obligations defined in certain paragraphs of the International Covenant on Civil and Political Rights and the Convention on Human Rights and fundamental freedoms. Kiev recedes from compliance with international obligations in relation to their own citizens - citizens of Ukraine living in the territories of the DNR and the LC. This is taking into account the fact that Kiev does not recognize the very fact of the existence of the DNR and the LC and continues to shout at all angles about the unitary structure of Ukraine and its unity.

Consider a few paragraphs of the said Convention for the Protection of Human Rights and Fundamental Freedoms, which was adopted in the distant 1950 year in Rome. Articles conventionswho refuse to comply with Ukraine, wear numbers 5, 6, 8 and 13.

Article 5: The right to liberty and security of person.

Kiev, for example, is not going to fulfill such a clause of this article:
Everyone arrested is immediately informed in a language he understands, the reasons for his arrest and any charges against him.

Or this:
Every person detained or imprisoned (...) is promptly brought before a judge or other official who has been vested in the judiciary, and is entitled to a trial within a reasonable time or to release to court. Exemption may be subject to guarantees of attendance at trial.

I’m not the main ideologues of the principles of detention of prisoners in Guantanamo Prison prompted the Ukrainian authorities about this vision of solving the problems of “compliance” with international law.

Article 6: The Right to a Fair Trial.

And again, thoughts about the American project of the CIA prisons, where detainees can be held for years without charge, trial, investigation. Again about the project, in which there is a place for horrific torture and other humiliations of human dignity.

Article 8: The right to respect for private and family life.

In other words, the Ukrainian government is not going to respect even the private (family) life of the residents of Donbass. It's like an indulgence for punishers who rush into houses, turn everything upside down, engage in looting and commit war crimes against civilians.

Article 13: Right to an effective remedy.

In principle, it follows from the previous articles. Residents of Donbass didn’t have to wait for any protection from the state apparatus before, but now the state authorities of Ukraine have turned Donetsk and Luhansk citizens into strangers at the legislative level.

It should be noted that on Monday, Ukrainian Foreign Minister Pavel Klimkin announced new steps for the country in the fight against corruption. And with these steps, Klimkin called the need to start a large-scale replacement of the “post-Soviet” passports for new-style passports by the end of this year. What is it for? Well, certainly not to the fact that Klimkin is really going to fight bribe-takers and embezzlers, because there is no logic in trying to link the change of passports to the fight against corruption. But Klimkin has a different logic ... How can I put it more softly: an alternative ...

If, before the end of 2015, Ukraine begins to change passports, then residents of the so-called “individual regions of Donetsk and Lugansk regions” for the most part will not have a chance to get a new Ukrainian passport. Thus, Kiev is ready to aggravate the already existing segregation according to the principle of the territorial affiliation of a person. This is a kind of tracing paper with the Baltic legislation on "non-citizens". Based on the laws adopted by Kiev, residents of Donetsk and Luhansk people's republics that are not recognized by the Ukrainian authorities, losing their basic rights, may also become “non-citizens”, which finally cuts them off from the Ukrainian legal field (if such exists in modern Ukraine).

It would seem that international human rights organizations should sound the alarm after such legislative initiatives by the Ukrainian government and after the deputies' decisions mentioned. However, international human rights defenders are a special color, which, as practice shows, is a very selective approach to human rights and freedoms. Thus, representatives of the (calling themselves human rights) organization Human Rights Watch said that Kiev is supposedly right, because “military operations are taking place in the Donbas.” Like, if hostilities can be thrown into the basements of the SBU or front-line raw pits of people without trial, without formal charges being brought. If military actions, which Kiev, by the way, does not call the military, continuing to exploit the rhetoric in the form of an “antiterrorist operation”, then you can engage in looting and looting, you can kill and rape - still the state is not going to protect the population of the region.

This is how human rights defenders ... If Russia is already getting used to the hypocrisy and obscurantism of Kiev, then to HRW’s statements ... But why should we be surprised? The independence of any “human rights” organization ends where its financing begins by interested parties. They said: do not interfere with Ukraine building its base for Guantanamo and for forming the stratum of non-Ukrainians, HRW doesn’t interfere ... In general, Human Rights Watch showed all its gut in Ukraine with its actual justification for complete lawlessness. And this is the inside, forgive me, lousy ... With this approach to the legal protection of individual HRW employees (or is this the position of the entire HRW?), Any butcher from the market is a big human rights activist than they ...

Turning a blind eye to the monstrous violation of the rights and freedoms of the residents of Donbass, Sites of their “legal” structures continue to reflect on the topic of the murder of Nemtsov and to criticize ... homophobia in Kyrgyzstan. Well, it is understandable - a mighty handful of Kyrgyz pederasts (and apparently, there are those) for the same HRW is much more important in terms of the “only correct” administration of human rights, than millions of Donbass.

Returning to the law adopted by the ASU. If these are measures to preserve the unity of Ukraine, then it was difficult to come up with something more effective for the state of Ukraine to take a big step towards its final collapse. 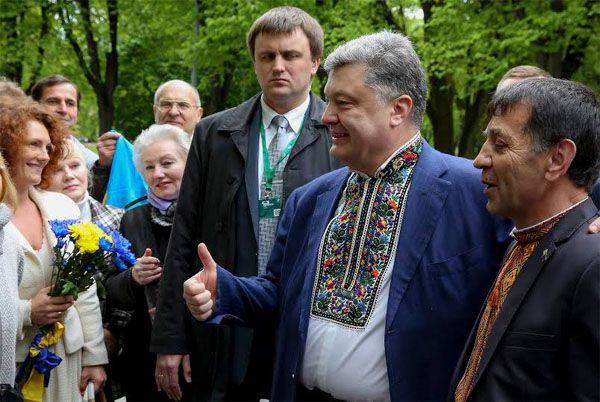 How is Orwell's: “All animals are equal. But some animals are more equal than others. "...