Steel Donbass. A story about how a deadly weapon was transformed into beauty 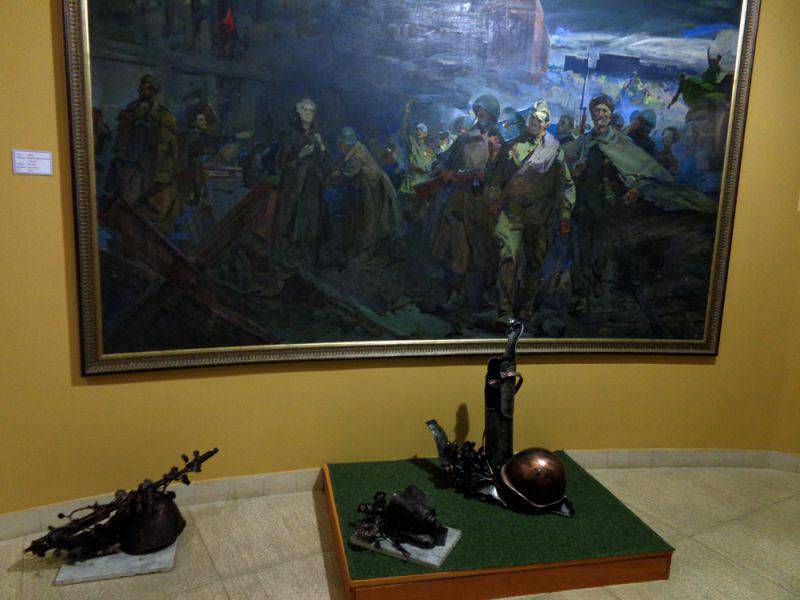 There is a Lenin Komsomol Park in Donetsk (which, however, was renamed the City Park of Culture and Rest, but the townspeople call it the old fashioned way). There is a proud and majestic memorial complex “Your liberators, Donbass”. Inside is the Militaryhistorical Museum of the Great Patriotic War, at the entrance to which eternal flame burns. On May 20, an unusual exhibition opened in this museum called “Steel Donbass”, dedicated to the 70th anniversary of the Victory. 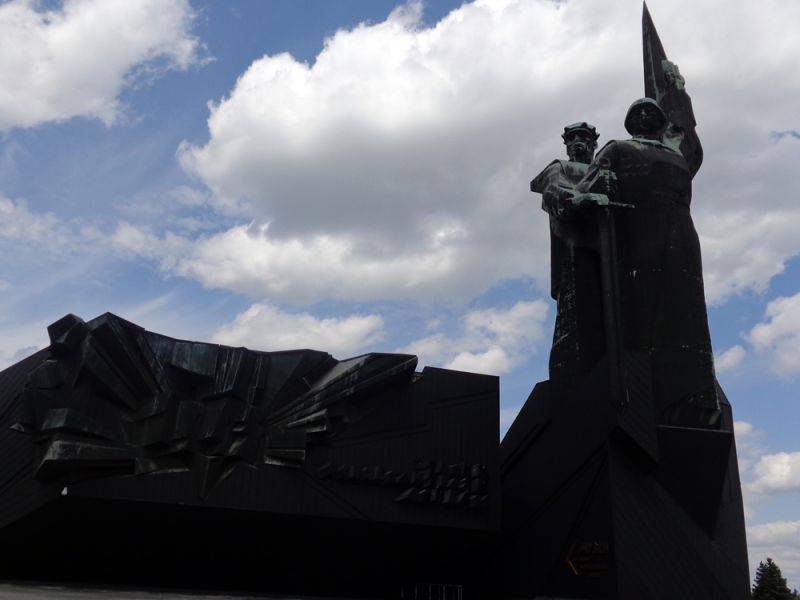 At first I wanted to make a report immediately about the exhibition and about the museum, but in the course of my work I understood that the museum itself deserves a separate topic (which I intend to return soon). Therefore, we will talk here about the exhibition of Donetsk sculptor Viktor Petrovich Mikhalev. He began practicing art forging in 1999. His work adorns the Park of forged figures, which is loved by the Pitmen. 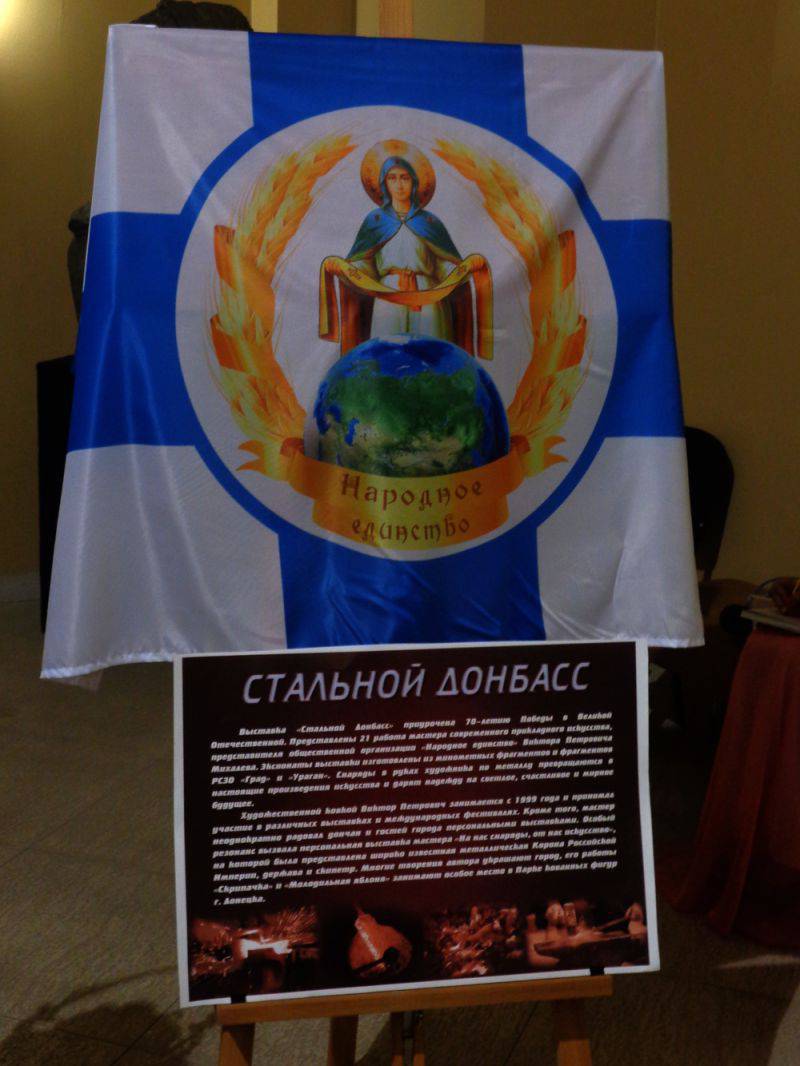 It was a new war, and the artist looked at it in his own way. He began to forge bombs, shells, debris weapons into fine works of art. The warriors are the defenders of the Donbass and the volunteers helping them constantly bring Mikhalev the source material directly from combat positions. In the hands of the master, this mournful material turns into freakish figures, flowers, candlesticks ... 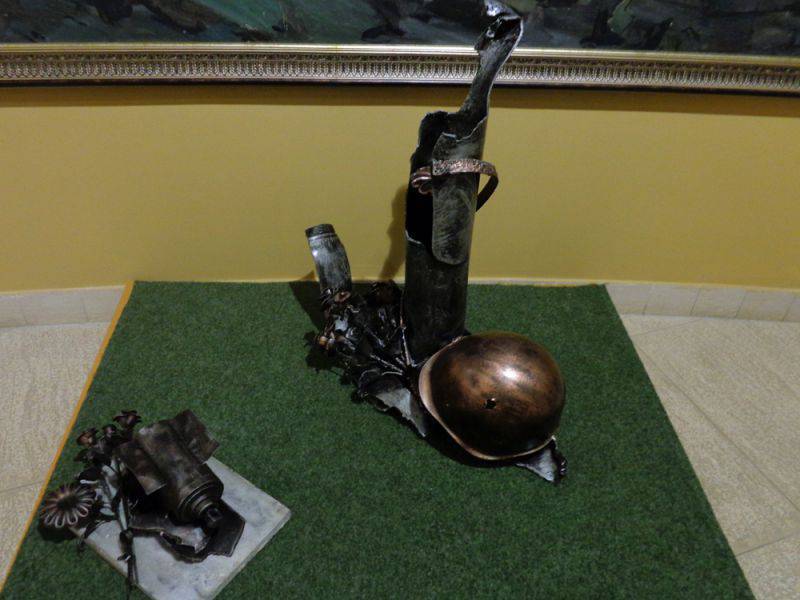 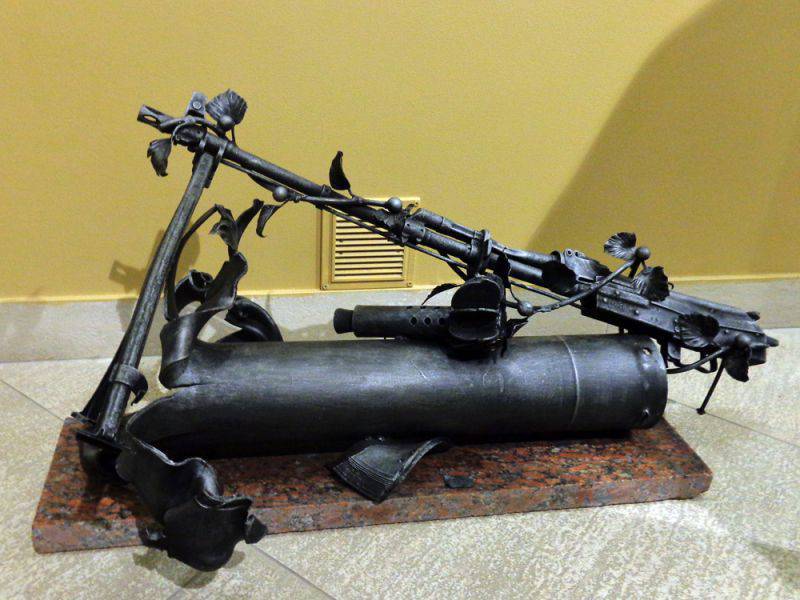 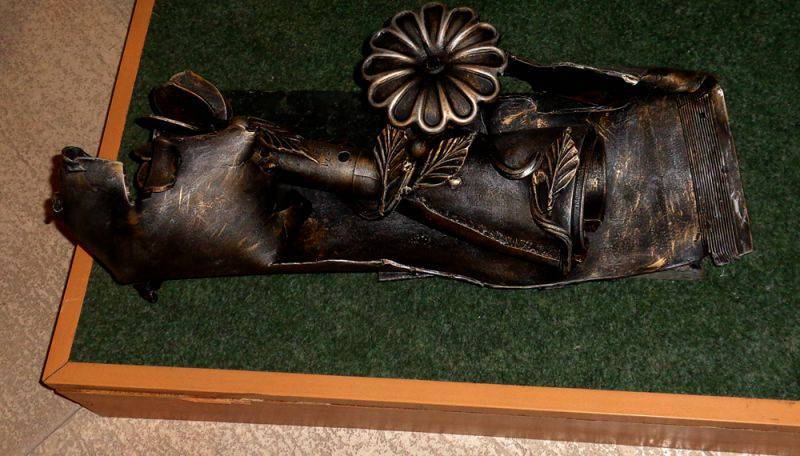 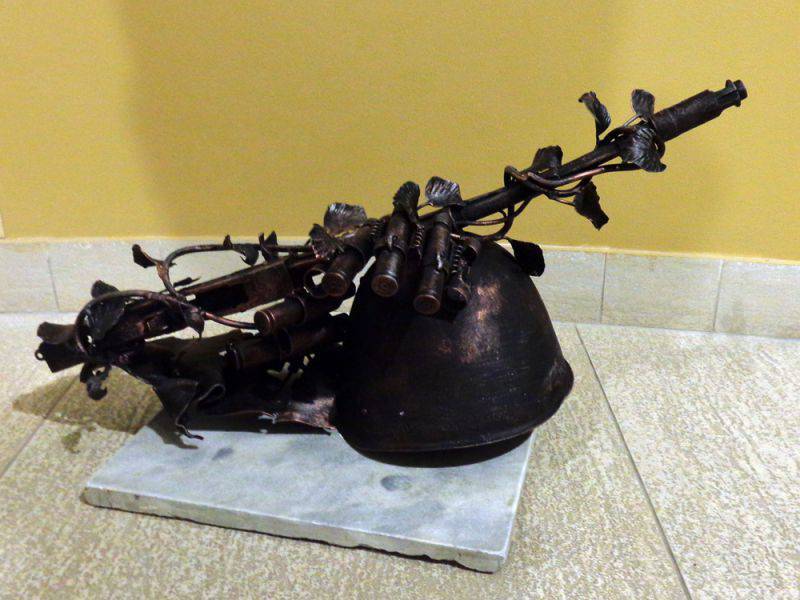 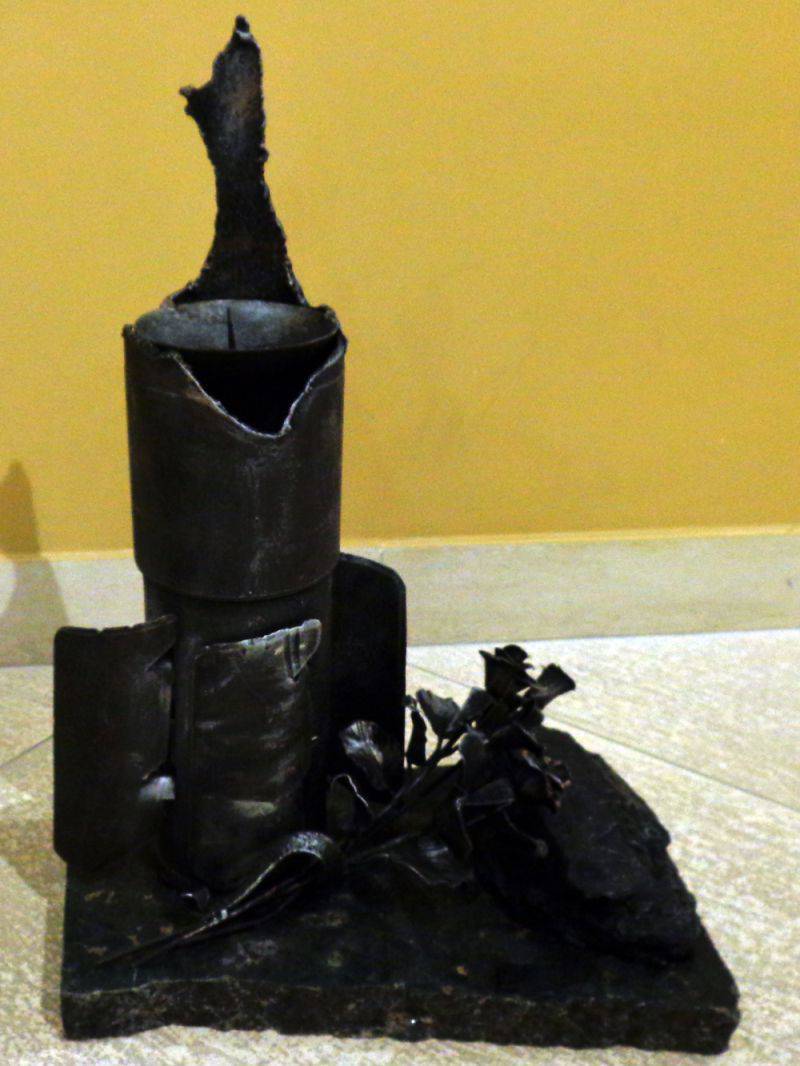 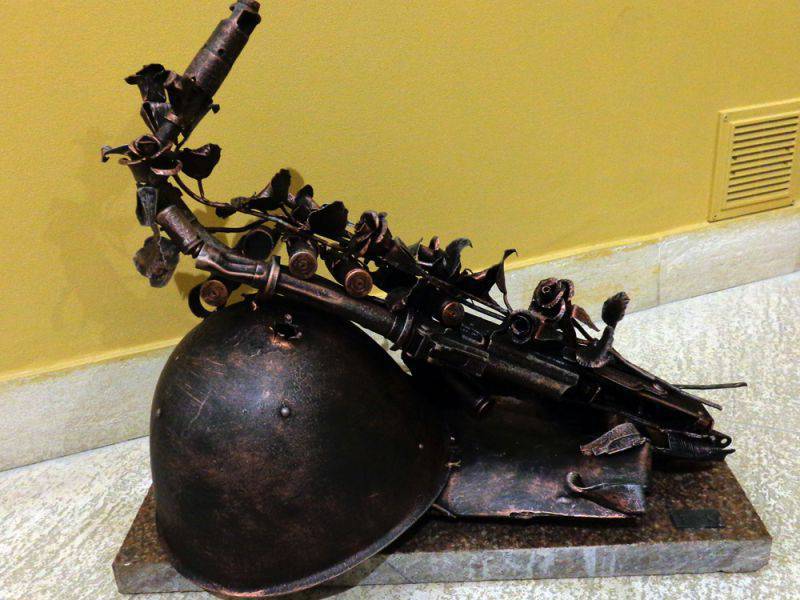 However, looking at other works, it is even hard to believe that they are made of such a terrible material. 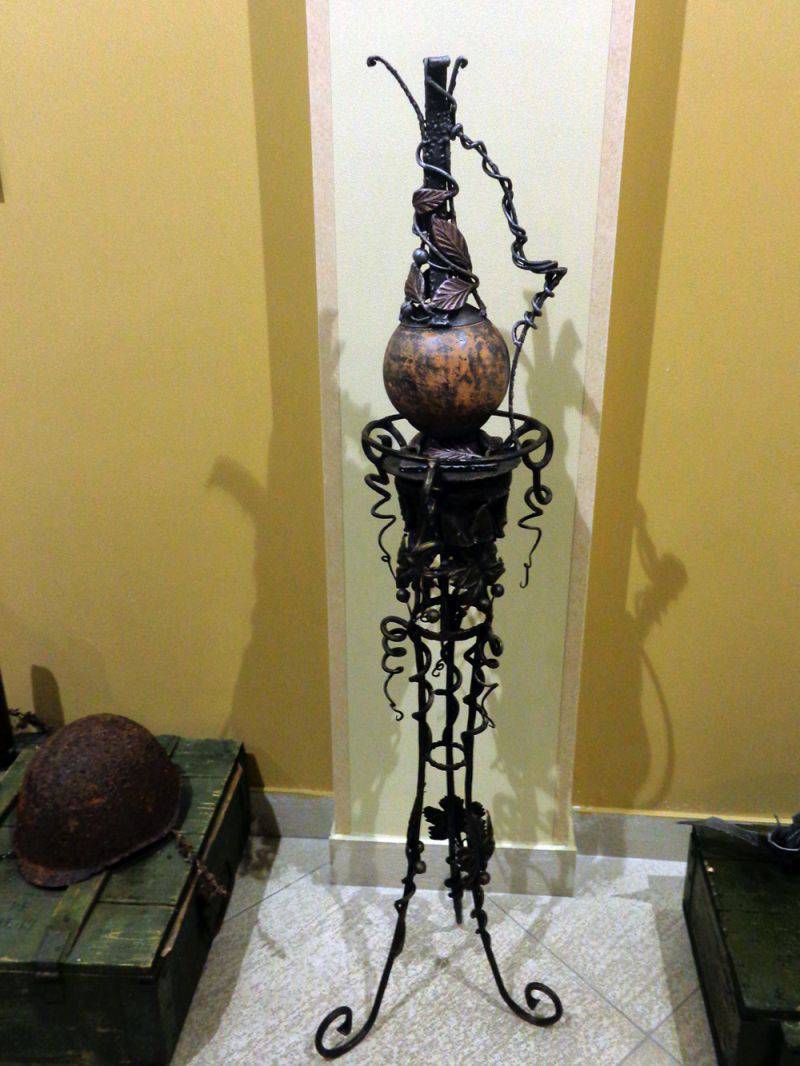 But here is this rough material. He is also represented in this room.

All this fell on the heads of the residents of Donetsk and the surrounding area. But now it is forged in beauty. The hands of the artist did the almost impossible - they turned death into life.

Mikhalev says: a fragment of a phosphorus bomb was used in one of the sculptures, and the punishers claim that they do not use such forbidden weapons. 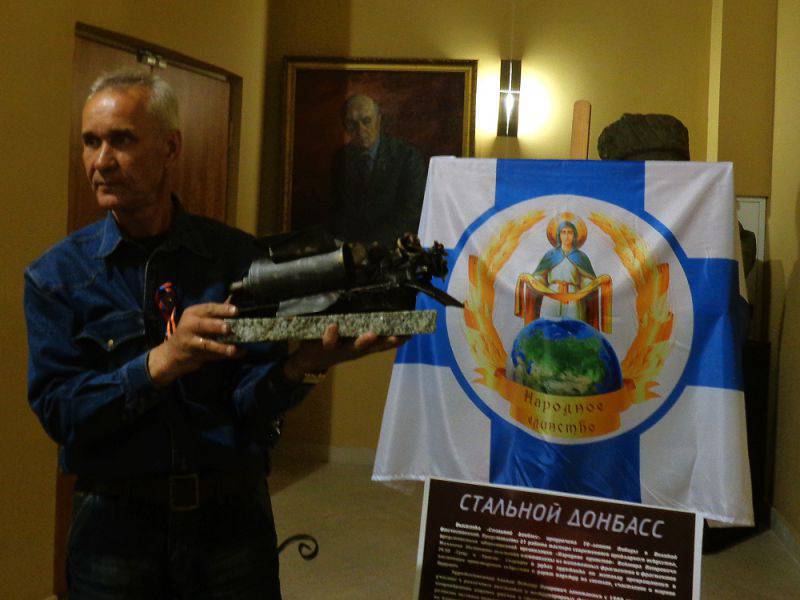 The master loves roses, which occupy a significant place in his work. No wonder Donetsk is called the City of a million roses, he says. 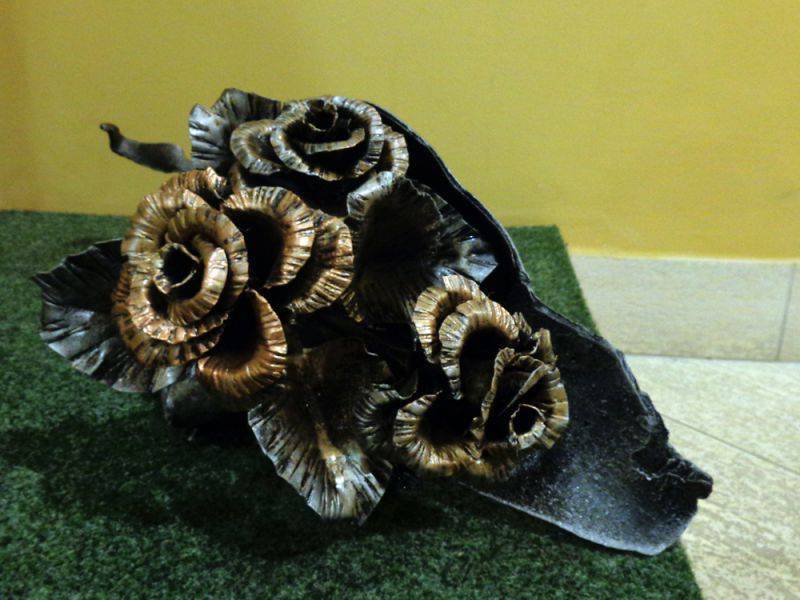 Children from Yelenovka arrived at the opening of the exhibition. This town is located close to the front line, and its inhabitants feel the war even harder. However, they found an opportunity to arrive, despite the dangerous roads. The guys read piercing poems about the war. About that war gone, which ended with 70 years ago ... 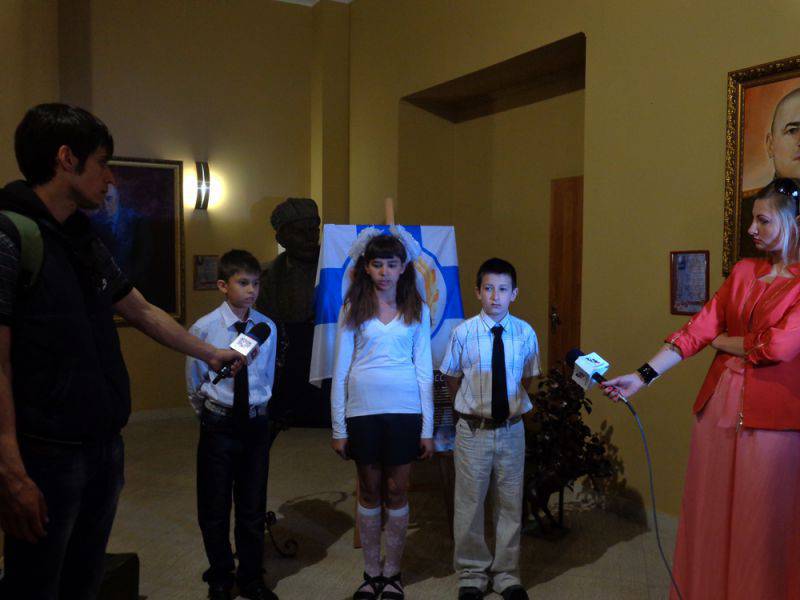 And again on the ground of Donbass shots and explosions are heard. Blood is shed again and people are dying. Again, someone dug out from under the rubble. The vaunted "truce" does not help either - almost every day and every night more and more new lives are interrupted ... Every evening you have to fall asleep to the sounds of shelling.

You can cry, you can be afraid, you can run away from the horrors of war. And you can live contrary to her. You can even create art from its terrible material, which is what Viktor Petrovich Mikhalev does. One of his recent exhibitions was called very symbolically: "Shells are on us, art is from us."

In the future plans of the artist - to hold similar exhibitions in Rostov, Moscow and other cities. Do more work. And also - to create from fragments of bombs and shells a large monument in honor of those who died in the new war.

For now - in the military museum of Donetsk, the heroes of the ousted war look from portraits at what is made of the fragments of the present ... 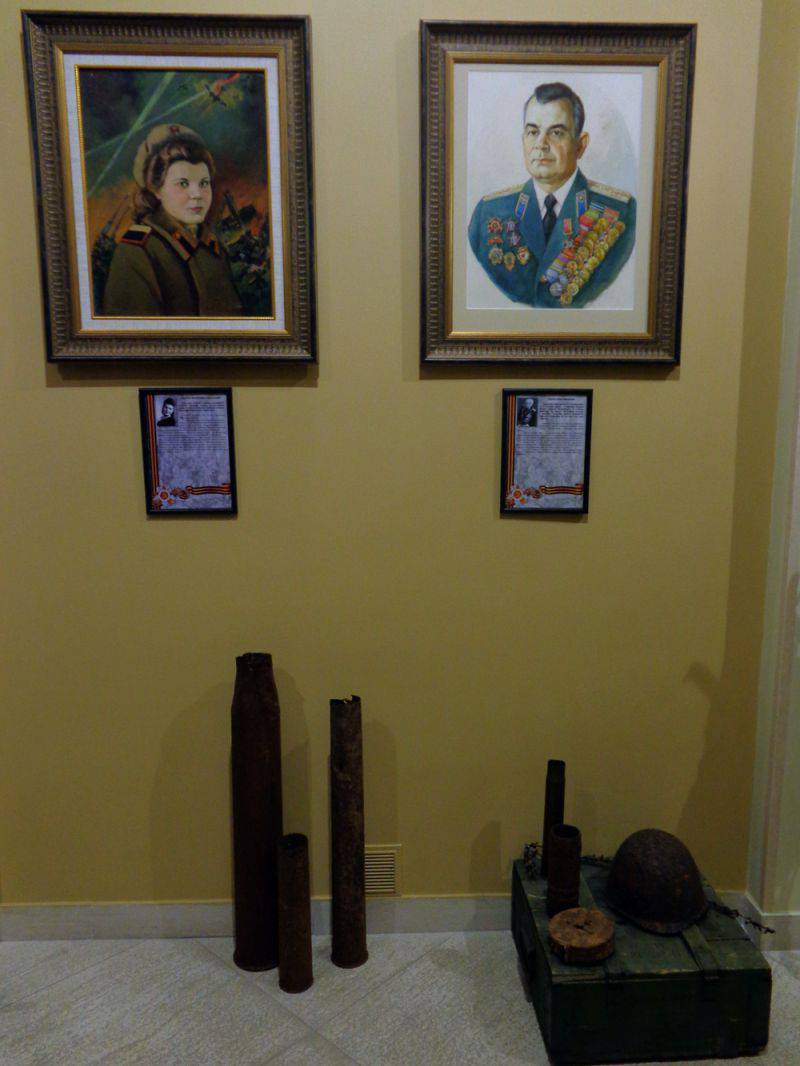 While some people live and create beauty, others continue to threaten war and bombard peaceful cities. Kiev junta builds up troops. Unfortunately, Viktor Petrovich seems to have even more rough material for art ...

Ctrl Enter
Noticed oshЫbku Highlight text and press. Ctrl + Enter
We are
Memory sake. In the Donetsk Museum of the Great Patriotic War, a diorama of the battle at Saur-Grave openedReport from TsNIITOCHMASH. Part I. Weapons and ammunition
Military Reviewin Yandex News
Military Reviewin Google News
14 comments
Information
Dear reader, to leave comments on the publication, you must to register.