Yevkurov: Russia is not a country to joke with 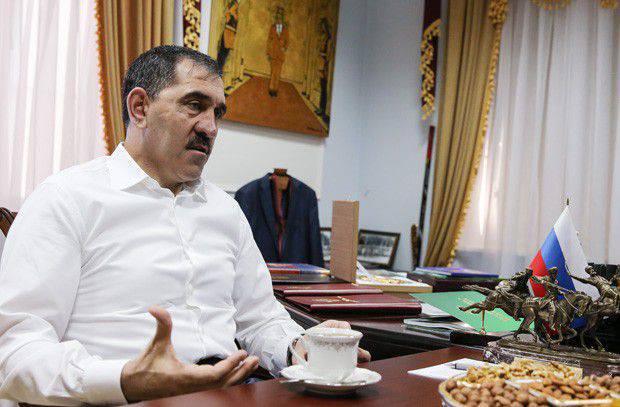 The head of Ingushetia told the Russian Planet about politics, external challenges and national patriotism

Yunus-Bek Yevkurov is one of the most popular politicians in the Caucasus. The future head of the Republic of Ingushetia dedicated his life to the army, was awarded with military awards and the star of the Hero of Russia for his throw on Pristina. But even after taking office as president, Yevkurov did not manage to live peacefully - riots, murders and explosions took place in Ingushetia.

22 June 2009 of the year at 9 an hour of the morning an assassination attempt was made on him: when passing through the presidential motorcade in Nazran, the car of the terrorist drove into the car in which Yevkurov was located. He was hospitalized in serious condition, but after a few months he returned to his duties.

Despite all the difficulties in the region, today Ingushetia is one of the most peaceful places in the North Caucasus. There is development of residential areas, tourism is developing and production is improving.

- Yunus-Bek Bamatgireyevich, it’s no secret that the attention of the entire country is riveted on the Caucasus - this is not always a good reason. Nevertheless, against the general news background, Ingushetia is hardly visible and audible. What is happening in the republic now?

- Well, first of all, we are not trying to specifically get on the air. The most important thing for us is that we are not heard and not seen in the context, as it was five or six years ago, terrorist acts and other disgrace, which the insurgents staged. Now, when they talk about the republic, it concerns issues of the economy, social sphere, stability or the tourism sector. And we are not going to create some kind of block blanks, we are not going to simulate events. The result is interesting and important to me, and not empty PR and advertising.

- If we talk about the economy, now for the country is not the best situation: sanctions are directed against us, and therefore much attention is paid to the anti-crisis program. This is evidenced by both Vladimir Putin and the government. How did Western sanctions affect Ingushetia and what measures are being taken to stabilize the situation in this direction?

- As part of the anti-crisis plan of the Russian government, we have developed our plan of priority actions. Of course, the main indicator of sanctions is pricing. Here, it is very difficult to keep prices even for products that are produced in the republic, since it is all integrated into the common space of a market economy. Despite this, we keep the situation under control so that there are no big price hikes.

Otherwise, these sanctions, oddly enough, had a positive effect - a more developed approach to the development of the products with which we replace imported goods appeared. Moreover, even before the sanctions, we began developing a number of projects, including the meat and dairy complex, which has already been commissioned and launched, and a complex for processing vegetables and fruits.

Now we are actively increasing production and in all indicators in the district we are in the top three in terms of import-substituting products. For example, if last year we for one hundred percent provided the republic with potatoes, in this we can deliver it even to other regions. That is, we work in many areas, including the military-industrial complex, the tourism sector and much more.

Do not forget that in Soviet times, the Chechen-Ingush Republic was a donor. Now, after the heavy 90s, we need to raise everything to the previous level. In the near future we will be able to achieve self-sufficiency and in the future no longer sit on the neck of big Russia, but on the contrary, further develop and help other regions.

- Undoubtedly, these are interrelated things, and it’s just impossible to talk about who gets more benefits from friendship, because this is part of a single space. Of course, there is the Russian world and the Russian people, around whom a large number of small nations have rallied. It should be understood that most of the nations are not conquered, in particular, the Ingush voluntarily became part of a large Russia. So, now in the country celebrate the 245 anniversary of this event, because we have found our protector and friend in the face of great Russia. In general, for the Caucasus, Russia is a big land.

For the Russian Federation, these are geostrategic interests. And it is not for nothing that in the past centuries in all wars the Caucasus was an important link in this chain. The desire of our enemies to seize the Caucasus is still not weakening, because the interests of the United States of America, Great Britain and other countries are contrary to the interests of Russia. In this regard, it is clear that a serious geopolitical map may be played in the Caucasus.

Whoever says that Russia will live better without the Caucasus, is deliberately misleading. Following this, they will say that Russia will live better without the Volga region, then without the Far East. I remember very well the period of the collapse of the Soviet Union, when there were hotheads who discussed the creation of the Far Eastern Republic, the Ural Republic. Undoubtedly, we must understand that we should not allow such scenarios on the territory of our great country, especially since we have more and more enemies every day. And there are more of them because Russia has firmly risen to its feet. 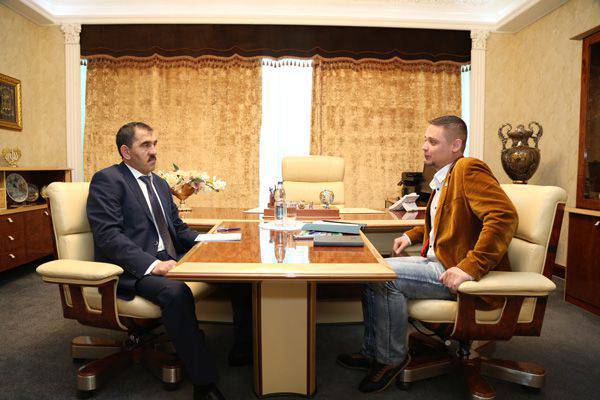 "We need a military bloc"

- On the other hand, now we have more and more friends. Now we, together with other major players, such as China, India, Brazil and Malaysia, can create a new military bloc that could withstand NATO. Every day, the Western alliance is becoming more aggressive and blackmails its countries with the military power of those countries that want to pursue an independent policy. They, at their own discretion, overthrow the governments, sow panic and chaos, so NATO must be countered with an equivalent or even superior force. Unfortunately, now there is no Warsaw Pact on which it was possible to rely, but there are states that have united around Russia, ready to stand shoulder to shoulder.

- So you think that you need to focus on the East - the countries of the Arab world and Asia?

- Not only. I think that those European states that should be grateful to the successor of the Soviet Union of the Russian Federation for their liberation from fascism, still turn to face us and stand with us. We need to understand that today they have nowhere to go - they have no alternative but to go to an alliance with America. And the USA together with Great Britain built a scheme there, when the world economy depends on these two states.

Therefore, if Russia with such a powerful industrial component can withstand any sanctions, then, as experience shows, many other states will not withstand them. Believe me, if these sanctions were imposed even in 2000, then there would be a collapse - it would be a real disaster for Russia. And today, we suffer less from sanctions than those who introduce them. People saw the branch on which they sit. But one way or another, we still should not lose contact and relations with Europe.

As for the Arab countries, they have historically been engaged in a war with Catholics and Protestants, and Orthodoxy, these battles were often bypassed. And now Russia largely supports the Arab world and condemns the actions of the United States, which in various ways are trying to impose their will on Syria, Libya, Iraq and Egypt. The United States blames countries for dictatorship and imposes its “holy cow” democracy. And in fact, in these countries a healthy economy, decent social security. But after the “liberation” operations, everything turns into a destroyed, scorched desert. And here it is not surprising that the Arab world has always been and will be our ally.

"We are citizens of Russia and its patriots"

- We are all now witnessing what is happening in Ukraine. Unfriendly forces create scenarios for which they are trying to destroy and reassign the countries of the post-Soviet space. More recently, the situation in the North Caucasus was more than alarming, but your efforts managed to put out the fire of extremism. Do you think that a blow to the region can be delivered once again by the West, and what should we do in this case?

- Of course, everything can be, but I firmly believe that now Russia is not at all the one that was twenty or even ten years ago. Not only on military power and modernized technology, which the liberals are trying to expose as unnecessary ballast for the country. When I was still serving, the army was reequipped for 70%. Of course, now this percentage has increased. But I would like to stress once again that it is not only in the Armed Forces, if we are talking about things that happened during the collapse of the Soviet Union.

Today, any attempts to influence our territory are stopped. Yes, somewhere someone will be able to infiltrate, go through the mountains to the republic, but it will not be massive. Previously, such a threat was from the territory of Georgia, when hundreds of terrorist fighters were trained in their camps, but now it is not. I, as head of the republic and all our republican government, are ready for all the challenges. Russia is not a country to joke with.

- You have repeatedly stressed that in the event of military aggression, the Russian Federation is ready to resist the forces that want the war to change the sanctions for a war of bombs. But here another nuance is important, namely, the internal readiness of Russian citizens to unite. Does Ingushetia identify itself not only as a national subject, but also as part of Russian civilization?

- Today, Ingushetia ranks first in the rankings in terms of the population content with domestic and foreign policy. If my memory serves me, it's about 84%! In general, in Russia, traditionally, when an external threat appears, they unite around their leader, and, of course, today this can be traced. And the Ingush, who have the oldest history interactions with the Russian world and the Russian people are also extremely patriotic. And, most importantly, we see the rise of youth in this matter. All the major wars did not do without the participation of the Ingush, who, together with the Russian people, fought the enemy and showed themselves valiantly and with dignity. The younger generation has examples to be equal to and from whom to learn.

Of course, it is necessary to note the religious component, because today's opposition of Russia with the United States strengthens the youth in anti-American unity. We all see the United States bombing Iraq, Libya, Syria, and many other countries, which causes widespread discontent with this arbitrariness. But first of all, I emphasize that we are consciously together with Russia, we are citizens of the Russian Federation and its patriots.

This is not just a turn of speech: we are actively helping refugees from the south-east of Ukraine, now about 500 people live in Ingushetia. The Ingush have a great understanding of the pain of war. Here they organize clothing and food reception points, which are sent in whole columns both to the Donbass and to those affected by the fires in Russia. And all without any order from above. This is what the consolidation of society says.