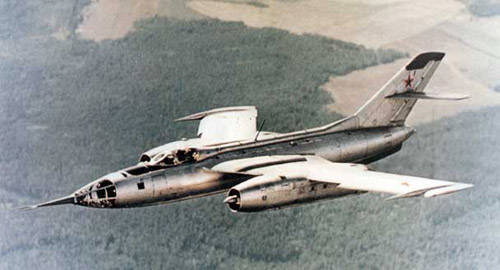 The fate of this aircraft is somewhat similar to the fate of the famous "Mauser" K-96 - neither one nor the other was officially adopted ...

And, nevertheless, the Mauser regularly serves to this day, and the plane we want to talk about protected the air borders of the USSR and the Warsaw Pact countries, up to the replacement with the Tu-128 and even the MiG-31. Start this history We would like an almost detective story that happened to this device during the Cold War.

6 April 1966, the radio operators of the British Air Force Base in the Berlin suburb of Gatow, intercepted an order from Soviet dispatchers to attempt to land the plane on the water of Lake Havelsie, but only in the Soviet sector. At the cost of their lives, the pilots tried to do everything possible, but, despite desperate attempts, the plane crashed into the waters of a lake in the British zone. Both pilots died.

The British military police immediately cordoned off the lake, a translator of the British military intelligence in Germany (Brixmis) was sent ashore, where Soviet soldiers under the command of General V. Bulanov were already in a hurry. The leadership of one of the most amazing spy operations took over the head of Brixmis - Brigadier Donald Wilson.

The British immediately organized a rescue operation, promising to return the plane and the pilots' bodies to the Russians, a barge and a floating crane approached the crash site, and hard work was already under way in the water - first of all, the British were interested in engines and a radar with an antenna. Their divers and tried to take off for study.

In the meantime, the translators were ordered to calm down Bulanov in order to gain time. When Bulanov, accusing the British of dishonesty, tried with several soldiers to go to the lake, two arrows suddenly jumped out of the darkness. Intending to defuse the situation, the translator asked the soldier to confirm that he had the right to miss the general. He answered with a British imperturbability: “Only not in this fucking life, sir!”

While the bodies of the pilots were being transferred to Bulanov, the engines and the radar with the antenna were already hurrying to Britain. After 48 hours, the engines and radar were returned to the site, but when the wreckage of the aircraft was returned to the Russians on 13 on April April, there was no antenna. The British claimed that they returned everything, if something is missing, which means that it lies at the bottom of the lake. Try, prove that this is not true ...

The plane, which happened this amazing story, the British later recognized as the Yak-28P ("Firebar" by NATO classification). It is believed that his predecessors were the Yak-26 and Yak-27Р, but, in my opinion, this is not entirely correct. It seems to me that the countdown must still begin with the Yak-1952 (which is in the series - the Yak-120) that came out for testing in 25, you just have to look at their photos. This is what can be considered the ancestor of a whole family of aircraft, united by a common scheme, but different in purpose.

So, in the 1969 year was created double supersonic interceptor Yak-28P. Its main purpose is to intercept air targets at low and medium altitudes in a large range of speeds and in all weather conditions. Naturally, although the layout has remained the same since the Yak-25, the design has changed significantly.

First of all, it touched weapons systems - if the Yak-25 “base” long-range patrol interceptor was armed with two NA-37 guns of 37 mm caliber, then it was decided to abandon the guns on the new interceptor, two K-8M missiles were installed instead (later -30). One of them was guided by a radar beam, the second was equipped with a thermal homing head. The capture of the target and the launch of the missiles was provided by the Orel-D radar. In addition, an additional station installed radio command guidance "Azure".

The changes also affected the propulsion systems - Р-11АФ-300 was replaced with Р-11АФ2-300, having installed them in elongated gondolas with a round inlet. With the new engines Yak-28P got another advantage, especially important for the interceptor - a short run-up (at the front end of the engine - just 400 meters) and a high climb rate, which reduced the time to reach the target. Provided also the suspension of powder starting accelerators discharged after takeoff. To reduce the mileage provided for the installation of brake parachutes. All this made it possible to build airfields with shortened runways in the regions of the Far North, where the construction of “normal” airfields is fraught with certain difficulties. 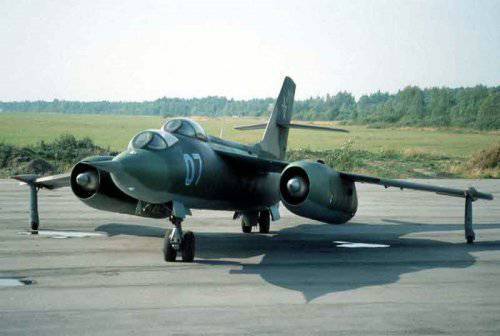 In the course of serial construction, some changes were made to the Yak-28P design: the number of missiles was reduced to four by adding two R-3С melee missiles, the nose radio transparent fairing was extended, which caused certain concerns of the radar designers who were afraid of deterioration of the station's performance. A compromise was nevertheless achieved, and subsequently, in the course of current repairs, new cones were installed on old machines directly in parts. This machine has received the designation Yak-28PM.

And at the end of our far from complete story about this undoubtedly interesting car, it only remains to add that the Yak-28 was in operation for more than twenty years, and there were parts in the air defense system where the Yak-28П served for a very long time. 174-th GvIAP switched to MiG-31 only in 1983. They remained on the New Earth even longer - 641-th regiment retrained to Su-27 only in 1988 year.