22 May 2015
37
On May 21, the management of Kamov announced the completion of construction and the transfer of four Ka-52K Katran helicopters for testing. A new modification of the "land" attack helicopter was developed for operation on ships of the naval fleet. Currently, Ka-52K helicopters are used in trials. In addition, an order for the construction of such equipment is being carried out. Nevertheless, against the backdrop of recent events, the further fate of the new attack helicopters raises certain questions. 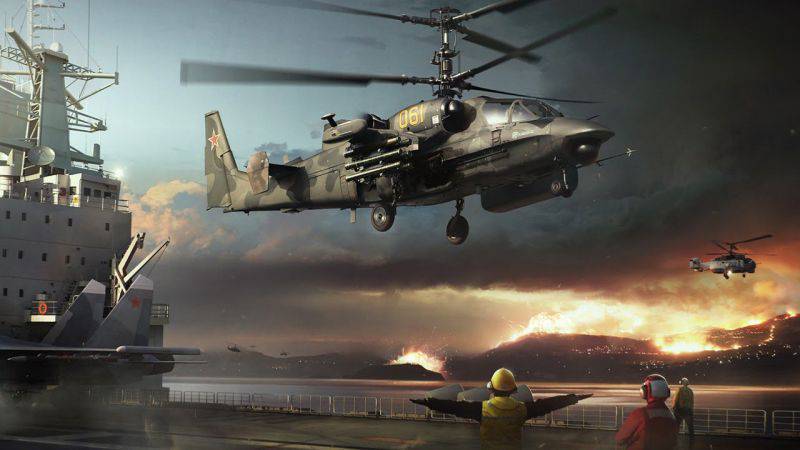 In the middle of last year, official Paris took an extremely strange position and refused to transfer the ordered ships to Russia. The first of the ships, according to the contract, was supposed to go to Russia last fall, but still stands at the factory wall in Saint-Nazaire. The transfer of the second ship was planned for the autumn of 2015, but this event is currently the subject of controversy. In the context of the refusal (possibly temporary yet) of France to transfer the ships ordered by Russia, some other questions arise. One of them is connected with the further fate of the ordered Ka-52K attack helicopters.

It should be noted that problems with landing ships have not yet affected the course of the Ka-52K project. Thus, the first flight of an experienced "Katran" took place on 7 in March 2015, i.e. a few months after the French side suspended the fulfillment of contractual obligations. More than two months after the first flight of the Ka-52K, Russian Helicopters Corporation completed the construction of the first four helicopters of the new model, which must now be tested. Thus, the refusal of Paris so far does not affect the progress of work on the project to create a ship attack helicopter.

Amid disputes around the Mistral, there were reports of the possible fate of helicopters. So, in January, the Ministry of Defense reported that in 2015, connections of the Eastern Military District will receive an X-NUMX Ka-22 type helicopter. This number includes Ka-52K 10 helicopters, which are planned to be transferred to Pacific Fleet naval aviation. Probably, these ship-based helicopters were supposed to be based on the first of two new DVKDs. Nevertheless, due to the refusal of France, they will have to serve on land aerodromes for the time being.

According to reports, the first Mistral type DVKD was planned to be handed over to Russia in the fall of the 2014 of the year, after which he had to go to one of the domestic enterprises to install the necessary equipment and weapons. Thus, by the end of 2015, the Pacific Fleet could have received a new landing ship and attack helicopters for it. The transfer of the second ship was planned for 2015 year, the inclusion in the fleet - on 2016. Obviously, by the time the second ship began service, the fleet should have already received a new batch of Katran helicopters.

It has been repeatedly claimed that the aviation group DVKD "Mistral" will consist of X-NUMX attack Ka-8K and 52 transport and combat Ka-8. In addition, it was possible to increase the number of aircraft, depending on the characteristics of the planned operation. For the "basic" configuration of two DVKD need 29 helicopters Ka-16K, not counting a few backup machines. At the same time ordered 52 helicopter. It turns out that the order of 32-10 attack helicopters are out of work. Or they are not intended for new amphibious ships.

It should be noted that similar arithmetic a few years ago would not have caused questions. It was originally intended to purchase four ships from France. Each had to accommodate eight helicopters, in the amount of 32 machines. However, at the end of 2012, the Russian Ministry of Defense transferred the third and fourth ships of the series to the option category. Now they were offered to order only according to the results of the operation of the first two DVKD. Because of this, in particular, the X-NUMX attack helicopters Ka-16K, which will be built, have been “released”, but now they most likely will not be able to get on the landing craft.

A similar difference in numbers may indicate that a certain number of Katrans should have been based on land airfields, complementing ship-based helicopters. Since the transfer of two ships of the Mistral type is now the subject of controversy, it cannot be excluded that all 32 attack helicopters will have to be based on airfields, unable to work with landing ships.

Nevertheless, it is impossible not to admit that in this case, naval aviation could do with the Ka-52 helicopters of the base model. In the modification with the letter "K" were applied some innovations related to basing on ships. The design of the chassis and wing were changed, and the nodes for folding the blades and the anticorrosion treatment of parts were used. When basing on land aerodromes, almost all such modifications do not make sense.

Back in September, 2011, when the first test landings of the Ka-52 were carried out on the ship, representatives of the aviation industry made interesting statements. It was alleged that in five years (i.e. approximately in 2016 year), the Ka-52K helicopters could be based not only on the Mistrals, but also on other ships of the Navy. This means that several years ago, helicopter builders considered the possibility of basing new equipment on various ships, without limiting their use only to promising DVKD.

During the tests of September 2011, the Ka-52 helicopter landed on the stern platform of the large anti-submarine ship Vice Admiral Kulakov (project 1155). The standard aviation group BOD of the 1155 Ave. consists of two anti-submarine Ka-27PL helicopters. For the storage and maintenance of this technique, such ships have two half-walled hangars in the aft superstructure. Known information about the dimensions of the Ka-27PL and Ka-52K helicopters suggests that the Katran is quite capable of fitting in the hangar of the BOD Ave 1155. 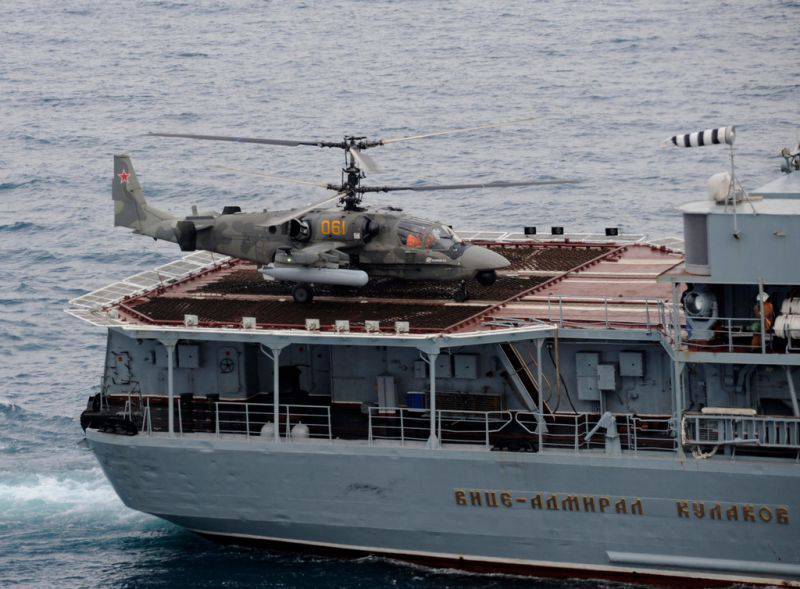 Ka-52 on the runway of Vice Admiral Kulakov, Federation Council, 31.08.2011 (photo from mil.ru, in decent quality - from Curious from forums.airbase.ru) 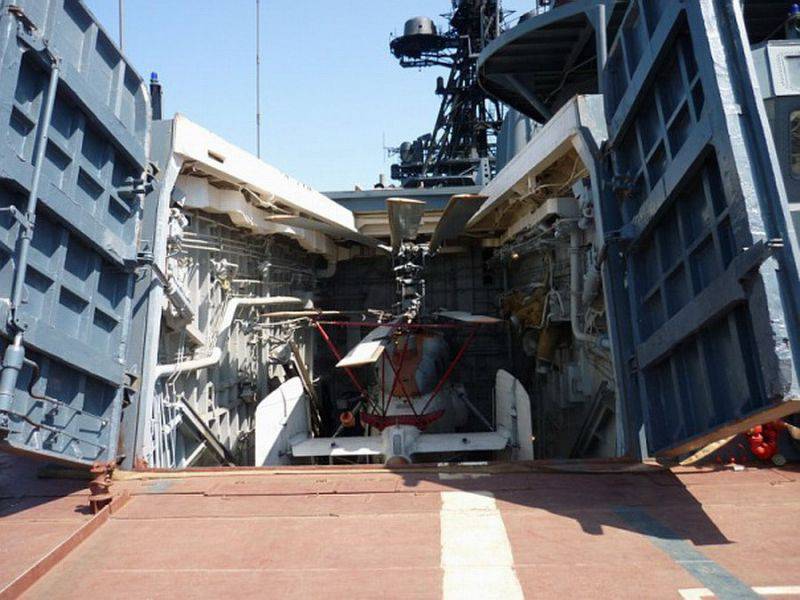 BOD "Admiral Chabanenko" - view of the fully open hangar with a helicopter inside (photo from forums.airbase.ru from Atom44)

Similar hangars and landing sites are provided on various other domestic ships. Thus, at least in the Ka-52K theory, they can be based not only on the Mistrals and the large anti-submarine ships of the 1155 project. This feature of ships and helicopters provides greater flexibility in the use of aviation technology for solving various tasks. Nevertheless, the issues of the basing of helicopters are not limited to the overall “compatibility” of the equipment. It is possible that this interaction may be obstructed or made impossible due to other factors.

When basing the Ka-52K helicopters on ships other than the Mistral type DVKD, questions arise about the intended combat missions. Initially it was assumed that the "Qatran" would have to support the landing of the assault, striking attacks on the enemy anti-amphibious defenses. In such a role, the attack helicopter is able to fully use its full potential with the help of any available weapons. 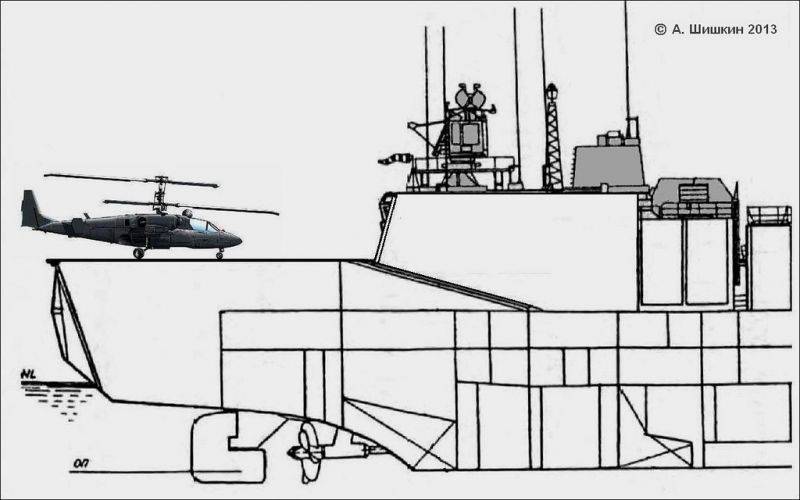 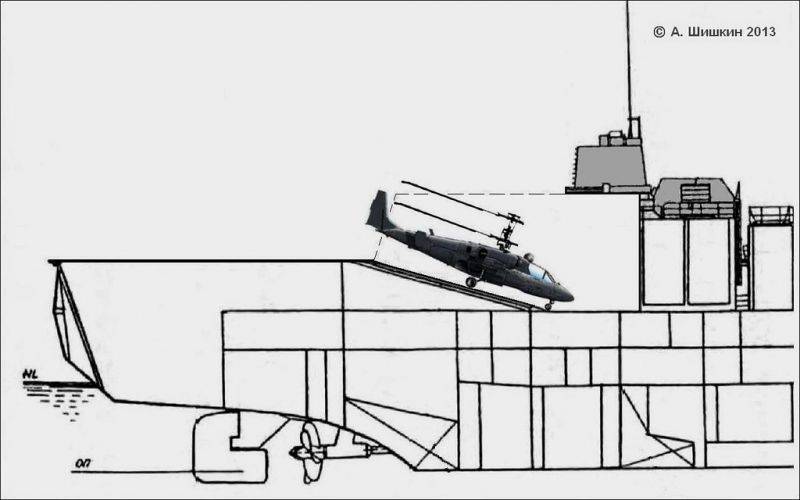 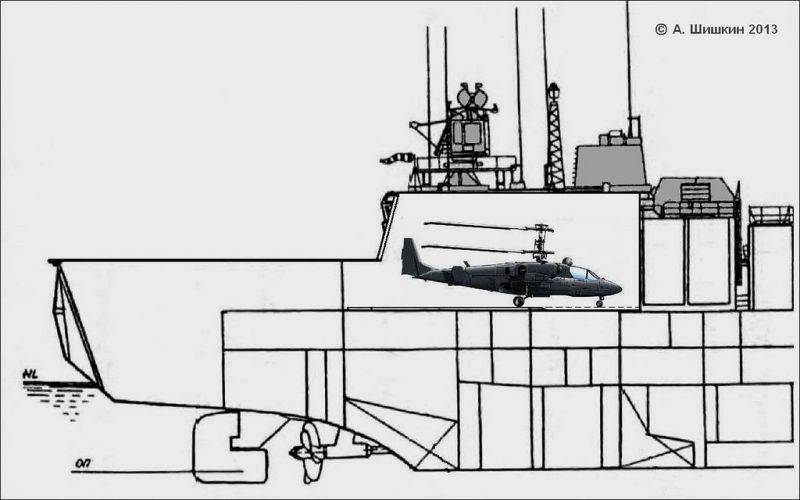 Placement of the Ka-52K helicopter in the hangar of the BOD Ave. 1155

Ka-52K attack helicopter basing on large anti-submarine ships, missile cruisers, patrol ships, etc. may be cause for doubt and controversy. It is not entirely clear what tasks the attack helicopter can perform when basing on such ships. According to some reports, the Katran will be able to carry anti-ship missiles that will be used to attack surface targets. Such opportunities to a certain extent will increase the combat potential of helicopters. Nevertheless, the question of the use of Ka-52K helicopters on various ships of the Navy requires special consideration and research.

Available information on the progress of the Ka-52K project and information about these helicopters suggest that the refusal of France to transfer the built ships would not affect the fate of the aircraft. The ship-based attack helicopters ordered and under construction will be used in naval aviation of the Russian Navy. It is unlikely that they will soon get on Mistral type DVKD, but they definitely will not remain idle. The Navy will be able to operate this technique on existing land aerodromes, and, in the future, on various ships. A few days ago, the military received four Ka-52K helicopters. During this year, the fleet is scheduled to transfer 10 new machines of this type.

Ctrl Enter
Noticed oshЫbku Highlight text and press. Ctrl + Enter
We are
"Svetlana". History of creationWorld market of modern large landing ships
37 comments
Information
Dear reader, to leave comments on the publication, you must to register.