How the Pacific node was created 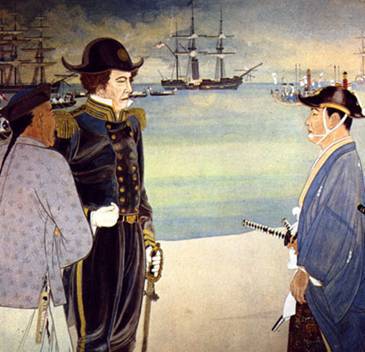 The knot of contradictions in the Asia-Pacific Region (APR) was created in the 19th century, when the great European powers began to actively explore this region, and it was then that the Americans “woke up” Japan with the help of force.

Initially, the leading position of the “empress of the seas” was held by the British Empire. London solved two main tasks in the Asia-Pacific region: first, it sought to prevent the expansion of the sphere of influence of the Russian Empire in the south-east direction (on the Korean Peninsula, in China, Tibet, and India); secondly, to protect their interests from the encroachment of other Western powers - France, Germany, the United States. The British, where by military force, where by economic means, seized key positions in the APR, but could not hold the region by force.

The Japanese Empire became the "trump card" of the British Empire. I must admit that London very skillfully played this trump card in the Big Game. Initially, the British, together with other great powers, robbed the Japanese of the victory of the Japanese-Chinese war of the 1894-1895 from the Japanese. Under the Treaty of Shimonoseki, China abandoned its suzerainty over Korea, gave Japan the Liaodong Peninsula, the island of Taiwan (Formosa), Penhuledao Island, and paid indemnity. In addition, the expansion of economic opportunities for Japan: all the ports of China were opened for the Japanese, they received the right to build industrial enterprises in the country to import their industrial equipment.

But the three great powers - France, Germany, Russia - demanded that Japan reconsider the terms of the treaty concluded in the city of Shimonoseki, they violated their interests in China. As a result, the Japanese were forced to abandon the Liaodong Peninsula. Japan harbored a grudge against Russia.

In 1902, London entered into a military alliance with the Japanese Empire, directed against Russia and the United States. The British were concerned about the economic expansion of the United States in China. If Great Britain defended the principle of dividing Chinese territory into “spheres of influence,” the United States introduced the principle of “open doors,” which, with the power of the American economy, gave them significant advantages. Russia for the British was a traditional enemy, which was necessary to restrain in all directions - from the Balkan Peninsula to Korea and North China. The Japanese considered Russia as a strong competitor on the Korean Peninsula and in North China — they considered these territories to be Japan’s sphere of influence.

The United States also supported the Japanese in the war with the Russian Empire, in return, the Japanese supported the principle of "open doors" in China. Russia in 1905 gave way to Japan South Sakhalin (Karafuto), the Kuriles, the Liaodong Peninsula with Port Arthur, the South Manchurian Railway, and the Japanese got the right to establish a protectorate over Korea. 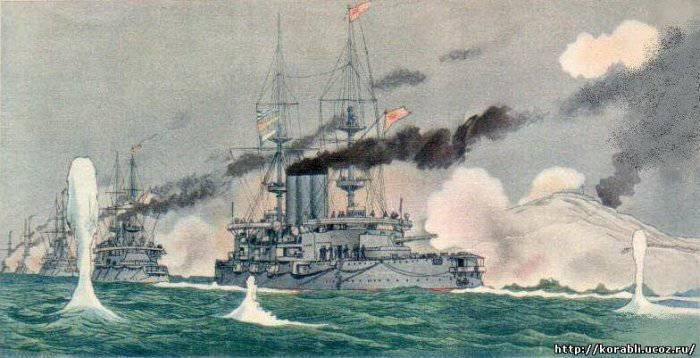 In 1910, Japan carried out the annexation of Korea, officially it looked like a voluntary concession by the Korean emperor of all supreme rights over the country to the Japanese emperor. The Japanese empire relied in its actions on the Korean collaborationist organization Ilchinkhwe and, most importantly, on the support of Great Britain and the United States. In 1905, the Anglo-Japanese alliance treaty was renewed, the American president Theodore Roosevelt recognized the priority interests of Japan in Korea, and the secret American-Japanese agreement Taft-Katsura was concluded. At the same time, Washington ignored the message asking for the help of the Korean emperor, and London announced that it would not hinder the Japanese occupation policy. The Russian Empire also did not interfere in Japanese-Korean relations, the Japanese recognized North Mongolia and Manchuria as the sphere of Russian “special interests” for this.

When a popular uprising against the Japanese took place on the Korean Peninsula in 1919, a prominent independence movement activist Lee Seung Man sent a personal message to US President Woodrow Wilson, there was a request to help establish Guardianship of the League of Nations over Korea, but the United States did not hear the call.

In 1911, a revolution occurred in China. China, and so semi-crushed, turned into a collection of provinces that were governed by party-military groups. Began active penetration of the Japanese in Manchuria.

During the First World War, the Japanese strengthened their positions even more - they seized the "sphere of influence" of the German Empire in the APR, became participants in the intervention on the lands of the former Russian Empire. Japan received a League of Nations mandate for part of the Pacific Territories. Germany and Russia have lost their positions in the APR; there are three main players left - the United Kingdom, the United States, and Japan (France did not have the power to play on their own).

The United States began to push Britain, replacing the main powers of the Western world. After the First World War, the States from the debtor became the main creditor of the planet, in 1916 a grandiose program for the construction of the naval fleet - By 1924, the American fleet was to become the largest in the world. The end of World War I slowed down the construction of the fleet, but did not stop the program. The Americans needed the domestic market of the vast British Empire. A clash of interests began in the colonies and dominions of Britain. So, the political elite of Canada began to move towards the United States.

At the same time, Washington was trying to break the Anglo-Japanese alliance. This was achieved at the Washington Conference 1921-1922's. It was also possible to achieve the right of equality in naval armaments with Great Britain - the so-called. Washington Maritime Agreement 1922 of the Year, Treaty 5 of the Great Maritime Powers (USA, UK, Japan, France and Italy). The agreement established the tonnage ratio of battleships and aircraft carriers in the following proportion: 5: 5: 3: 1,75: 1,75 (USA, Britain, Japan, France, Italy, respectively). Washington has achieved official recognition of the "open door and equal opportunities" policy towards the Chinese state. China was still regarded only as an object of exploitation. London suffered a serious defeat at this conference.

It was during this period that “black gold” - oil - began to influence the policies of the great powers more and more. American companies were actively advancing in Dutch India, where the British controlled earlier one-third of exports (oil and rubber). For the areas of oil production there was a struggle between oil companies - the Anglo-Dutch Royal Dutch-Shell and the American Standard Oil. In 1924, the largest black gold scandal took place in the United States - “oil panama”. Major abuses and corruption were revealed by the most prominent US government and officials in connection with obtaining oil concessions from the government in California. The scandal seriously compromised both leading American parties - Democrats and Republicans. 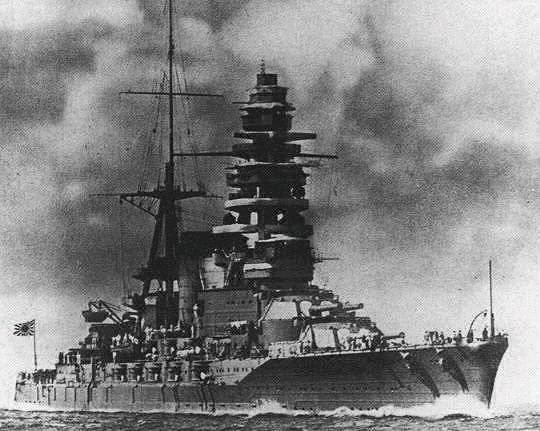 Development of the struggle for the APR in 20-s

Gradually, Russia-USSR began to restore its influence in the key APR country - China. In May 1924, an agreement was signed on “general principles for resolving issues between the Soviet Union and the Republic of China.” In September, 1924, Moscow signed an agreement with the “autonomous government of the Three Eastern Provinces of China” (Manchuria). The main issue of these agreements was the problem of the CER.

But complete peace in the Far East was not achieved. Already in 1929, there was a conflict with China, because the Chinese started to attack the USSR on the USSR. In response to the Chinese attack on the Soviet consulate in Harbin and the seizure of the Chinese Eastern Railway (a joint venture of the USSR and China), the Red Army (18,5 thousand bayonets and sabers) under the command of Blucher defeated Chinese troops of up to 300 thousand people. The Chinese have requested peace, and the normal operation of the CER has been restored.

After that, in Washington they chose the path of London and began to consider Japan as the main weapon of the struggle against Russia-the USSR. Chiang Kai-shek's regime could not confront Moscow on equal terms.

In 1927, in a memorandum to the Japanese emperor, Prime Minister General Tanaka formulated the idea of ​​the domination of the Japanese empire in Asia and the Pacific. In his opinion, Manchuria needed to be used as a springboard for establishing domination in the rest of China, and after receiving the resources of Chinese territory, Japan would go "to the conquest of India, the Archipelago, Asia Minor, Central Asia and even Europe." At the same time, the need for a new war with Russia was recognized.

But in the 20-ies, Japan failed to launch a large-scale external expansion, prevented by the consequences of the catastrophic earthquake of the year 1923 and the economic crisis of the year 1927. In addition, we had to take into account the power of the United States, dependence on American financial support and the strength of other powers. The global crisis of the year 1929 also played its role. 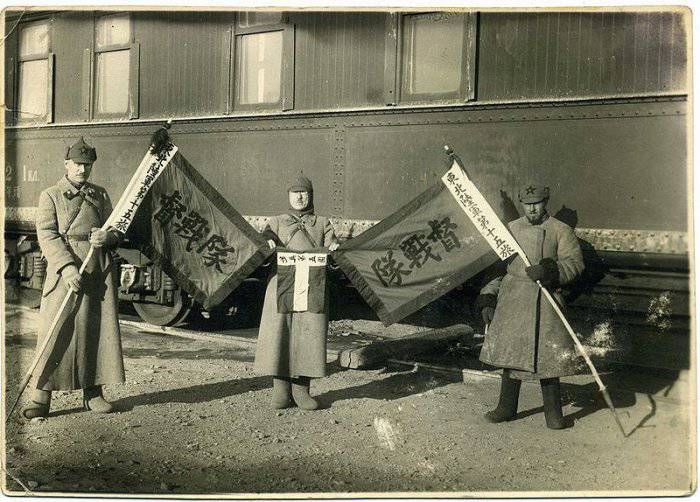 The soldiers of the Red Army with the captured Guomindang banners.