In Russia, the construction of a passenger hydrofoil ship "Comet 120M"

21 May 2015
46
In Russia, the construction of a civilian hydrofoil (SEC) is underway in a new project, the first since the times of the Soviet Union. This is a ship designed to carry 120 passengers. The construction of a civilian vessel is carried out in the city of Rybinsk, Yaroslavl Region, at the Vympel shipbuilding plant. The vessel intended for high-speed sea shipments is built according to the 23160 “Comet 120M” project.


OJSC Shipyard Vympel specializes in the production of low- and medium-tonnage sea and river vessels and boats, both civilian and military. Since the company was founded in 1930, more than 30 thousands of different types of ships of all types have been assembled and launched in Rybinsk. Over the past 40 years more than 1800 ships and boats built in the Yaroslavl region have been delivered to 29 countries of Europe, Asia, Africa, South America, countries of the Middle East and Southeast Asia. 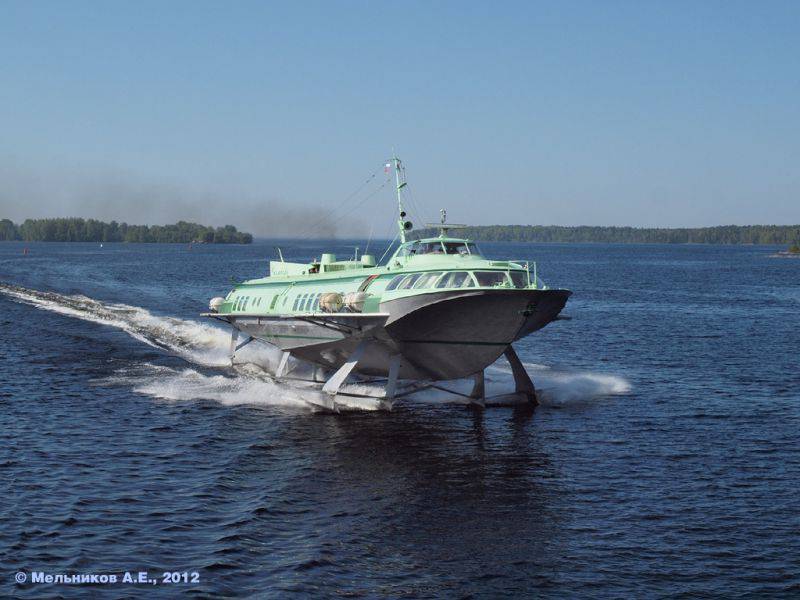 The ship is being built according to a project that was created by the designers of the well-known Nizhny Novgorod Russian Central Design Bureau of hydrofoils named after R. E. Alekseev. The fact of construction itself symbolizes the fact that high-speed civil shipbuilding begins to wake up from a long hibernation and a period of decline in the 90-s of the XX century. Source in the shipbuilding industry of Russia in an interview with RIA News stressed that in the 1990-ies available passenger high-speed vessels were sold abroad: to Greece, China, the Baltic countries, where they were at that time in demand by local customers. But now such ships are in demand in Russia itself. They would be very useful today in the Black Sea, where there are really great difficulties in servicing passenger flows. According to Soviet projects, such ships were built in Russia until about the middle of the 90s of the last century.

The new ship on the project 23160 was laid at the shipyard "Vympel" in the city of Rybinsk 23 August 2013 year. Governor of the region Sergey Yastrebov and Minister of Transport Maxim Sokolov took part in the solemn ceremony of laying the marine passenger hydrofoil "Comet 120M". At the ceremony of laying the ship were announced approximate dates of construction of a new vessel - 9-10 months. As it turned out, the terms that appeared in the press at that time turned out to be very optimistic. But the event itself, when after almost a 20-year break in Russia, the construction of passenger high-speed hydrofoil vessels and the subsequent serial production of a new generation SEC in Rybinsk was started according to a new project, of course, is a very important and significant stage for Russian civil shipbuilding. 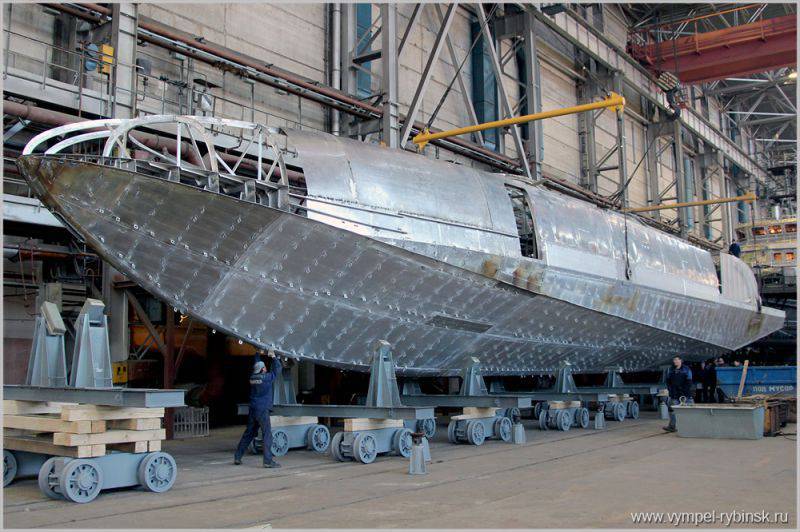 Perhaps it is just such a long break that imposes its influence on the construction time of the whole small ship. According to the manufacturer, 13 March 2015, the ship under construction was moved from the slipway from the first construction site to the second. Rybinsk noted that this is an important point, which means the end of a large phase of construction. Now the vessel will stay in the second outfitting position for about a month. Technological pressure plates, the so-called butt, have already been removed from the ship. The body is being welded outside. Ahead of the ship waiting for the mandatory phase of work - testing of the hull for tightness. As part of this work, X-ray flaw detection of seams will be carried out; in addition, tanks will be filled with water and will be tested for watertightness.

To save time on the construction of the vessel, work on forming the superstructure framework will begin at the second outfitting position. At the third stage of construction work, the 120M comet will be returned back to the jig where the superstructure will be riveted. At the fourth, final stage of work, the ship will be put on high keel blocks for mounting the propulsive-steering complex, wing assembly, propellers, shafts and steering wheel. 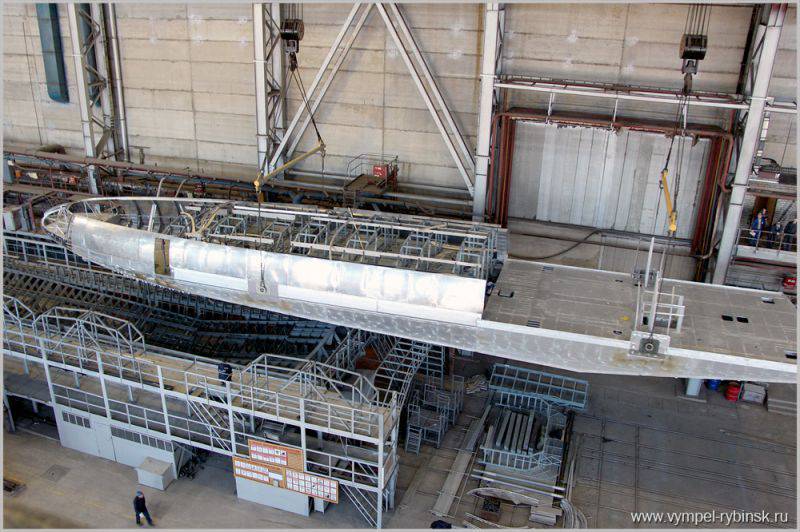 The marine passenger hydrofoil Comet 120M is a single-deck vessel equipped with a two-shaft diesel engine power plant. The vessel is intended for the implementation of high-speed passenger transport in the daytime in the new aviation-type seats. It is reported that this project of the ship was designed on the basis of the SEC, which were created in the USSR under the projects “Kometa”, “Kolkhida” and “Qatran”. The main purpose of this ship is the carriage of passengers in the coastal maritime zone. It is reported that the ship will be able to reach speeds in 35 nodes. Its main difference from the SEC previously built in our country will be the provision of a high level of comfort for passengers. To this end, an automatic system for moderating rolling and overloading should appear on the ship. The design of the ship will use modern vibration-absorbing materials, which should also positively affect the comfort of passengers.

Spacious business and economy class cabins on the new “Komet” will be provided with comfortable passenger seats of aviation type, the maximum number of passengers - 120, installation in the air-conditioning salons. The features of the ship include the placement of passengers in the nose and middle salons. In the aft cabin will be located bar. Also in the premises of the wheelhouse and the bar provides double glazing. The vessel will receive modern means of communication and navigation. It is planned to reduce the volume of fuel consumption due to the installation of modern 16V2000 M72 engines with electronic fuel injection, produced by the German company MTU, and propellers with increased efficiency. 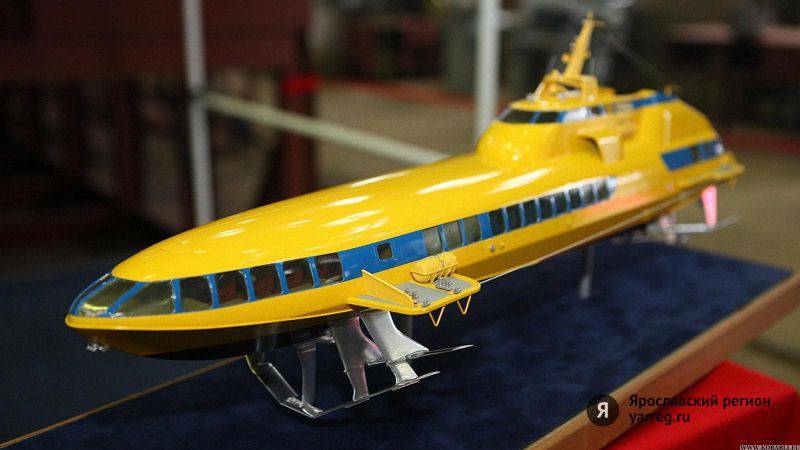 Also, Sergey Italitsev, the incumbent director of the “River-Sea Ships” program in the civil shipbuilding department of the United Shipbuilding Corporation, told reporters that the USC is considering the option of completing the Olimpia marine passenger ships on the underwater wings of the Olimpia project at the Khabarovsk Shipbuilding Plant . In the future, these unfinished vessels could be used to provide passenger transportation at the Kerch ferry in the Crimea. Also, in the case of completion, these vessels could be used in the Far East. It is in the Black Sea and the Far East that today there are big problems with passenger service.

Project Olympia ships are able to take on board up to 232 passengers. They are designed for high-speed passenger traffic on seas with tropical and temperate climates with distances from “ports of refuge” to 50 miles. In total, two such vessels were built, both were sold for export. The degree of readiness of two unfinished vessels is approximately 80%. If a decision is made and a contract is concluded for their completion, ships can be completed within 6-8 months, it is noted on the website of the Central Design Bureau for hydrofoil vessels named after R. E. Alekseev. 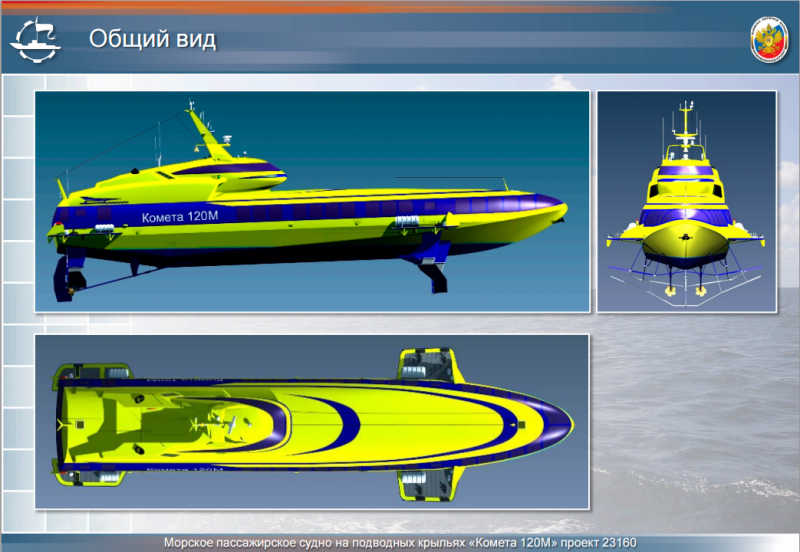 Two such vessels were built in the 80-s of the last century and successfully operated. Olimpia is one of the last projects of the Soviet civilian SEC. According to RIA Novosti, there are currently several potential customers who are willing to use these vessels on the Black Sea. According to Italutsev, preparatory work is currently underway in Khabarovsk in order to modernize this project to the requirements of today and under the register rules in force in Russia and to complete the construction of ships.

In the meantime, the ferry crossing over the Kerch Strait (crossing the port of Crimea - the port of the Caucasus) is the main transport artery that connects Crimea with the rest of Russia. For this reason, long traffic jams and waiting hours for loading cars on the ferry have become commonplace here, especially during the summer holidays. At the same time in winter and autumn traffic jams occur here only during a storm. By the end of 2018, it is planned to complete and put into operation a new bridge across the Kerch Strait. 247 billion rubles are allocated for the construction of this bridge, and 416,5 billion rubles are planned to be allocated for the development of the transport infrastructure of the Crimea. 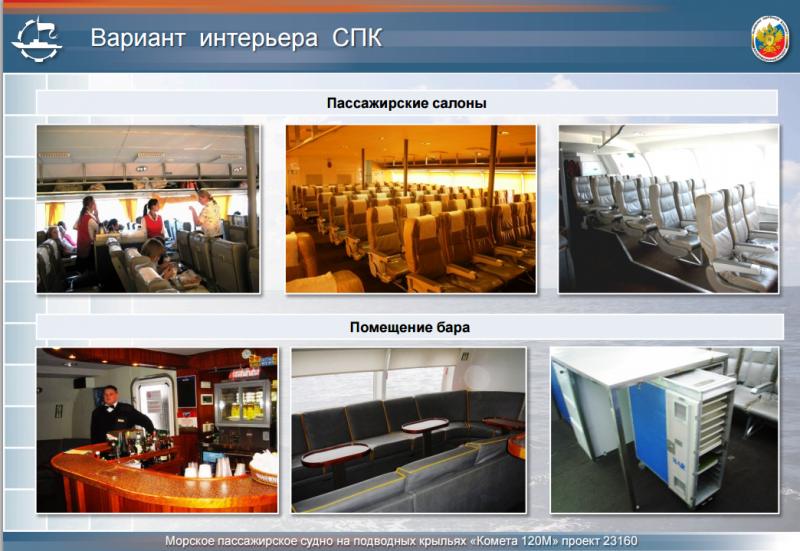