Russian submarines of the fifth generation will receive underwater drones

20 May 2015
14
The Russian Ministry of Defense believes that small subversive submarines have lost their relevance. On December 15, 2014, the deputy general director of Design Bureau “Malachite” Nikolai Novoselov told reporters about this. Along with this, he emphasized that, on an initiative basis, the enterprise continues to work on a group of mini-submarines under the symbol “Piranha-T” (torpedo). Submarine sketches with a displacement of 320 tons, 550 tons and 950 tons have already been completed. From small sabotage submarines "Piranha", which were in service with the Soviet fleet, new boats differ in speed, displacement and autonomy.

The main task of the mini-submarine "Piranha-T" should be the protection of coastal areas and shelves, the fight against terrorist threats, the setting of minefields, the opening of underwater conditions, as well as the landing of special forces (up to 6 combat swimmers). Submarines "Piranha-T" armed with four torpedo tubes. The composition of the ammunition of boats can include up to two missiles or torpedoes caliber 533 mm, 8 torpedoes caliber 400 mm, as well as 4 mines. Such a composition of armaments makes it possible to operate effectively in areas where great importance is attached to the secrecy of underwater vehicles not only by acoustic, but also by electromagnetic fields. The crew of such a boat ranges from 3-x to 5-people.

Boats "Piranha" are equipped with a special airlock. A covert swimmers stealthy exit from a boat is made when the boat is placed on an underwater anchor using the locking method. Combat swimmers take away weapon and equipment from external containers and then proceed to the task. Swimmers return to the boat is also carried out by locking.

Nikolay Novoselov also expressed his ideas about how the future Russian multi-purpose nuclear submarine will look like: such a boat will have two hulls and a displacement of less than 12 thousand tons. The displacement of the next generation boat will be approximately the same as that of the “Ash” series boats - up to 12 thousand tons, or maybe a little less. The fifth generation of submarines “Malakhit” is developing on its own initiative, the Ministry of Defense of the Russian Federation has not yet sent its technical task to the design bureau. At the same time, Novoselov noted that there are a number of technical requirements that the Navy will not deviate from: the percentage of flooding of the boat, requirements for habitability, the amount of food and drinking water reserves, how many cubic meters of area will be per submariner, etc.

In addition, the fifth-generation Russian submarines will receive new missiles, torpedoes, robots and submarine drones for service. The specialist noted that now we can talk about combat robots - technical means that can be produced directly from the submarine. It will be similar to existing flying UAVs, only for actions under water. In this case, the drones will be able to run from the board of the submarine and be in the "offline" mode, waiting for the receipt of the activation team. During this time, the submarine will be able to leave the area, and the drone, for example, will remain there, creating the appearance of having a boat in the same square.

It is worth noting that today, to the Russian submarines of the fourth generation, in addition to the well-known all nuclear submarines of the project 885 "Ash" and 955 "Borey", include the non-nuclear boats of the project 677 "Lada". The lead ship of the 885 project "Ash" - "Severodvinsk" in the 2014 year, became part of the fleet, by the 2021 year the Russian Navy will have 8 such boats. If we talk about the non-nuclear submarine of the 677 “Lada” project, the head submarine of the “St. Petersburg” series has been in trial operation since May 2010, but has not been included in the Navy. Therefore, speaking of boats of the fifth generation, it is worth understanding that this is still a distant prospect. Some specifics about breakthrough technologies that could be attributed to the technologies of the new generation, so far nothing is known. 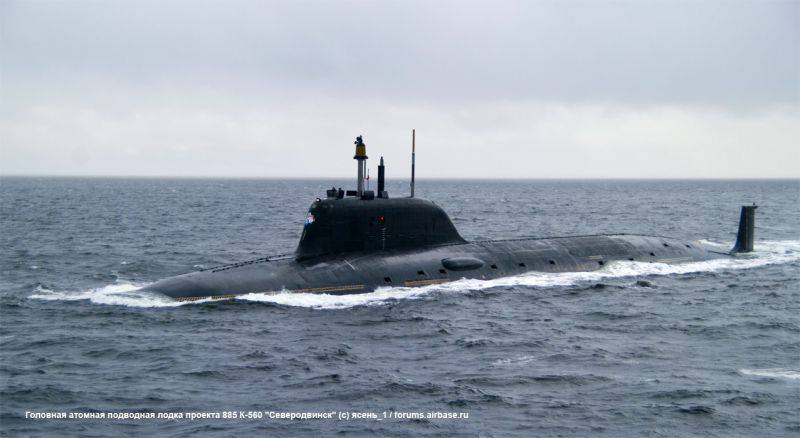 If we talk about underwater robots that are likely to appear on the submarine, at the end of 2011, the Russian fleet adopted the uninhabited autonomous remote-controlled submersible Obzor-600 (AUV), which is assigned to the Black Sea Fleet of Russia. This robot is used to explore the seabed. It is worth noting that earlier the Russian Navy used for this purpose underwater vehicles of English production. We are talking about underwater vehicles Pantera + and Tiger, the release of which was engaged in the company Seaeye Marine. These devices have proven themselves quite well in our country during the exercise of rescue forces and fleet assets.

The Russian underwater vehicle Obzor-600 belongs to the AUV class and is able to work at depths up to 600 meters. The mass of this unit does not exceed 15 kg, while it is equipped with manipulators that allow it to capture loads weighing up to 20 kg. Due to its small size, the "Review-600" is able to penetrate even into narrow or complex structures that are under water. According to the description of the device, which is posted on the website "Tethys-PRO", he is able to develop underwater speed in the 3,5 node. The device has on board a sonar that is able to detect underwater objects located at a distance of up to 100 meters. He is also able to transmit a color or black and white image to the device operator.

Last summer, in the Russian media, which referred to the document on the development of the Russian Navy, they reported that by the year 2017 the fleet should receive unmanned underwater vehicles - gliders, whose main task would be to search for the enemy and explore the ocean. Gliders are unique underwater gliders that are able to solve a fairly wide range of tasks in the interests of military and civilian structures. In this case, these devices can be sailing for months. According to military experts, today there is not a single naval task that could not be attempted with the help of gliders. 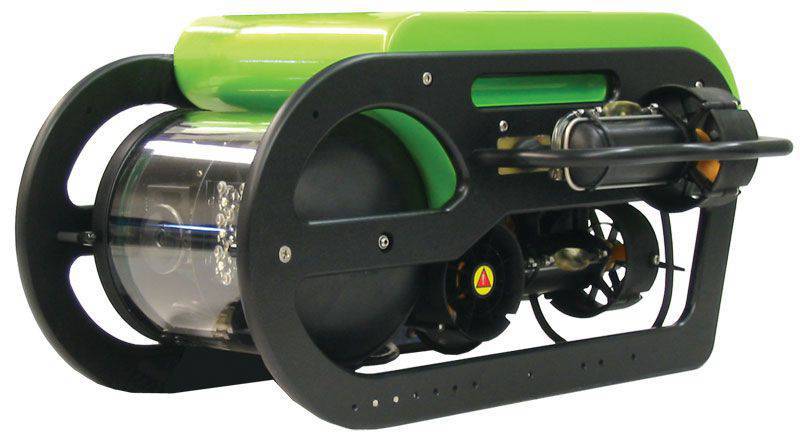 AUV "Review-600"
The tasks that gliders can solve in the interests of military structures are really extensive. These underwater vehicles are able to conduct reconnaissance, analyze the environment, conduct anti-submarine and anti-mine warfare, protect water areas, search for sunken objects, inspect military cables and pipelines, deliver cargo to the bottom and much more. In addition, they are able to conduct a variety of scientific and hydrological research.

Yevgeny Tatarenko, a professor at the Information Measuring Technique Department at the SamGTU - Samara State Technical University, noted that gliders can use various means to defeat the enemy. For example, today's 120-mm microtorpedoes, which can be equipped with new explosives, can be compared with 533-mm torpedoes.

Such underwater torpedo-type gliders are a planning device that moves by changing its buoyancy. This indicator can be adjusted by means of a hydropneumatic accumulator in the glider in the form of a cylinder with a pump, a valve and a soft tank. In this case, the cylinder is divided by a membrane into two parts, into which a special polymer oil is charged (with a density comparable to water) and air. When pumping oil it presses on the membrane, the air is compressed, it becomes heavier and the glider goes down. For the upward movement of the apparatus, the process is the opposite. Yevgeny Tatarenko noted that the gliders do not have a propeller with a propeller in their usual sense, so the energy is spent only on the pump. The professor noted that these are very small devices, and they have enough energy for several months of movement, which makes them very profitable.

For example, an apparatus with a length of 2 meters and a wing span of 1,3 meters with a weight of 50 kg can take up to 5 kg of payload, reaching speeds up to 0,5 m / s at a depth of 1000 meters. At the same time, the device will be able to swim for 60 days. In addition, the "torpedo" glider is immune to the effects of waves and is able to be used in a hover mode over a given point. It is quite difficult to find an apparatus of this size comparable to large fish. 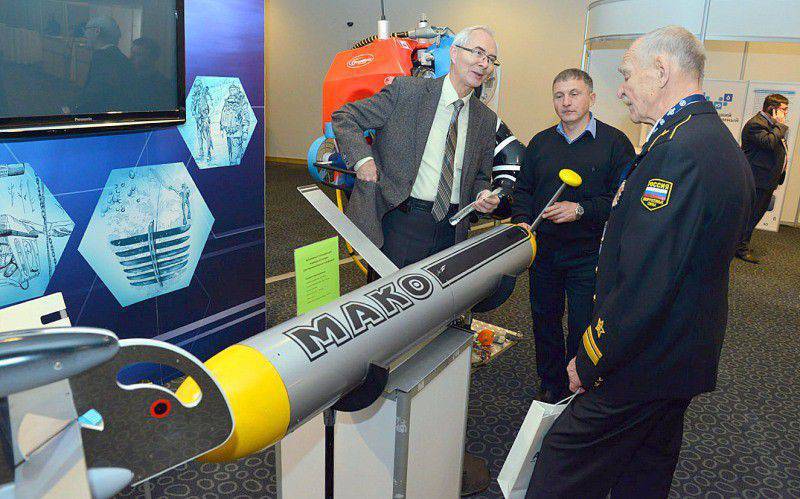 18 September 2014 showed a special underwater reconnaissance vehicle to Russian Prime Minister Dmitry Medvedev during tests in Krasnoarmeysk near Moscow, which was successfully used in preparation for the APEC summit in Vladivostok. It was reported that thanks to this reconnaissance robot, in just 2 of the day, it was possible to conduct a survey of the bay near Russian Island and to find with it more than 2,7 thousands of explosive items, including 7 mines from the times of Russian-Japanese and World War II. However, it is not yet known whether this complex can be launched from the board of a submarine.

It is worth noting that in the US, according to information from open sources, underwater unmanned vehicles are actively developing. Currently, there are about 65 unmanned submarines in the US Navy, and in 2015 a year their number can grow to 150 units. It is assumed that these mini-submarine robots will become the "eyes" of the American fleet. It is also interesting that in the 2012 year there were many reports in the press that the United States had introduced SeaFox underwater robots into the Persian Gulf, which can find and even destroy underwater and surface targets. The following mechanism was described: the marine drone could be launched from any platform - ships of different displacements, helicopters, rubber boats, after launching SeaFox found the target, and the operator issued a command to defeat it using a large-sized cumulative charge.

Americans are working on reconnaissance robots that look like sea creatures. For example, at the end of last year, it was reported that a drone was tested at Virginia’s naval base, disguised as tuna. This robot is created for covert penetration into enemy territory, and the “tuna” with a length of 1,5 meter can also be programmed for autonomous navigation, but so far it can work only “on a leash” in the form of a cable and does not carry any weapon systems.