Russia has established its own presence in Abkhazia, South Ossetia. 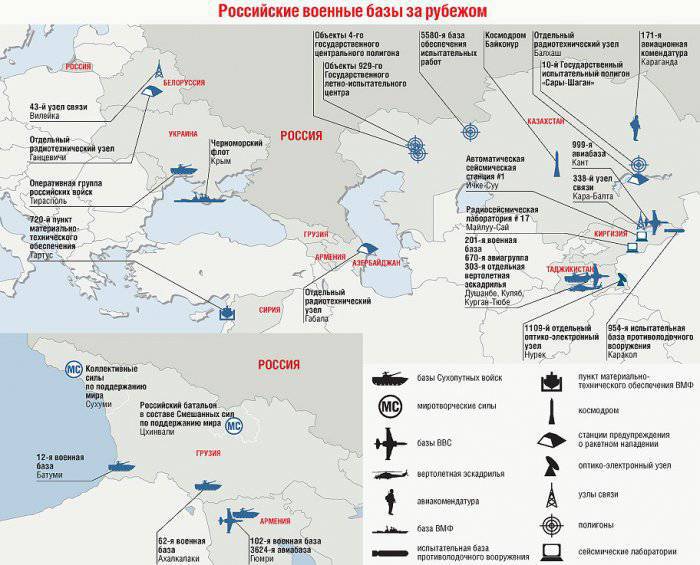 On October 6, the President of Russia, Dmitry Medvedev, signed bills on ratification of agreements with South Ossetia, as well as Abkhazia, regarding the fact that they should have military bases of the Russian Federation. This happened after early elections were held in Abkhazia, and the elected head, Alexander Ankvab, visited Moscow for the first time. In fact, the presence of Russian military bases in Abkhazia cannot be called more acute than the problems of cross-border cooperation.

Alexander Ankvab, who is 58 years old, was able to get about 55% of votes during the early presidential elections, which were appointed after Sergey Bagapsh died, who did not even finish it until the middle of his second constitutional term. Alexander Ankvab arrived in Moscow on October 5 2011 of the year after Dmitry Medvedev invited him. A personal invitation was handed over to Valentina Matvienko, who provided Russia during the inauguration of the head of Abkhazia.

At about noon 6 October 2011, Ankvab laid a wreath at the Tomb of the Unknown Soldier, which is located in the Alexander Garden, and then went to the Kremlin. Russia was represented at the meeting by Sergey Lavrov, who holds the position of Minister of Foreign Affairs, as well as Sergey Prikhodko, Assistant to the President of the Russian Federation. From the Abkhaz side, Beslan Kubrava, who holds the position of finance minister, and Vyacheslav Chirikba, deputy head of the presidential administration, participated in the meeting.

After the talks were held, the heads of the departments of Russia and Abkhazia in the presence of two presidents signed four agreements. These agreements concern interaction and data exchange in the field of arranging border crossing points of Abkhazia and Russia, on cooperation in the field of protection, as well as rational use of transboundary water bodies, memorandums of cooperation between state archives, and mutual understanding in the field of sanitary protection of territories.

President Dmitry Medvedev conveyed to Marina Shonii, the widow of the former President of Abkhazia Sergey Bagapsh, the Order of Courage, which her husband was posthumously awarded.

The Russian Federation was able to conclude agreements on its own military bases, which should be located in Abkhazia, as well as in South Ossetia, in 2010. Dmitry Medvedev signed ratification bills. This was able to finally establish the legal registration of the deployment of military bases of the Russian Federation in these territories. As a result, the current issues of cross-border cooperation are acute.

Alexander Skakov, an employee of the Russian Institute for Strategic Studies, believes that the difficulties at the border largely depend on the interests of Krasnodar Region, whose authorities believe that Abkhazia is an undesirable competitor in the fields of agriculture, as well as tourism.

Thanks to the signing of an agreement on information cooperation in the field of state border arrangement, it will be possible to normalize the movement of goods, as well as people through the crossings located on the Psou River. This object is the only transboundary, which is located on the water.

On the eve of the meeting of the presidents, information appeared that they should discuss the problems that are associated with Russian facilities located in Abkhazia. Recently there have been serious scandals. The Russians reported that they are trying to take shelter, which is located in Abkhazia. In fact, it was about residential real estate, the owners of which left it before, or during the Georgian-Abkhaz war, which took place in 1992-1993. Now the owners understand that their homes no longer belong to them. In several cases, the courts of Abkhazia returned the housing to the previous owners.

Ankvab assures that the Russians will be able to participate in the privatization of objects, namely, factories, sanatoriums, as well as trade institutions. In the near future, the Russians will have the opportunity to buy residential real estate without resorting to intermediaries. At the moment, the Civil Code allows it, but it will be necessary to repeal by-laws that act by inertia.
The personal relationship between Ankvab and Dmitry Medvedev is favorable.
Ctrl Enter

We are in Yandex Zen
Rogozin visited Nizhny Tagil, shot from a tank and a gun
9 comments
Information
Dear reader, to leave comments on the publication, you must to register.