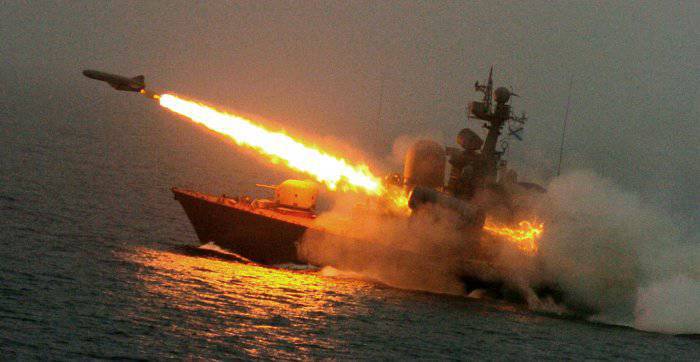 This article concludes a series of four articles on anti-ship cruise missiles. In it, we will talk about anti-ship missiles and complexes that were and are currently in service with the Russian surface military fleet.

By a decree of 30 December 1954, the creation of the first shipboard system weapons "Quiver" using Strela shells (KSS) with a range of 40 km. At the same time, it was supposed to make the most use of elements already launched into mass production. aviation "Comets." 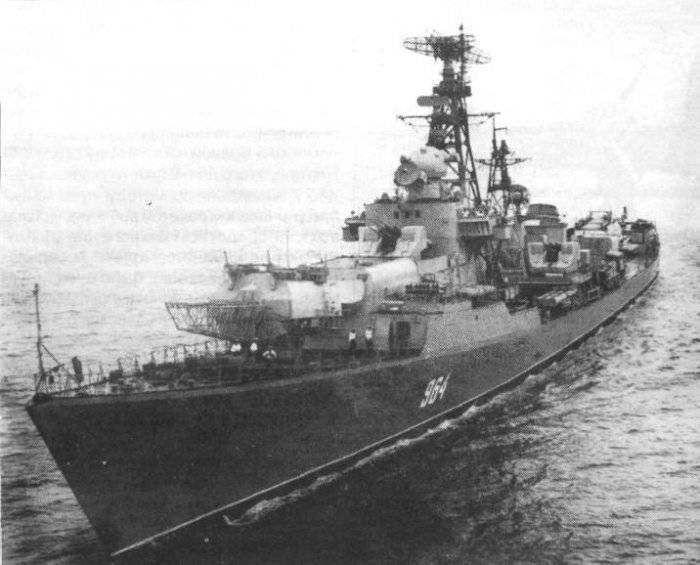 The ammunition, which was supposed to be placed on Sverdlov-type cruisers, the 68bis-ZIF, ranged from 24 to 28 KSS, based on the target of sinking two cruisers or seven enemy destroyers. Subsequently, the missile-carrying cruiser retained the designation of the 67 Ave., the variant of the first test phase was called the 67EP Ave., and the variant of the second stage was the 67SI Ave.

Among other things, a modification of the CSS with an active radar homing head, which provided over-horizon application, was provided. 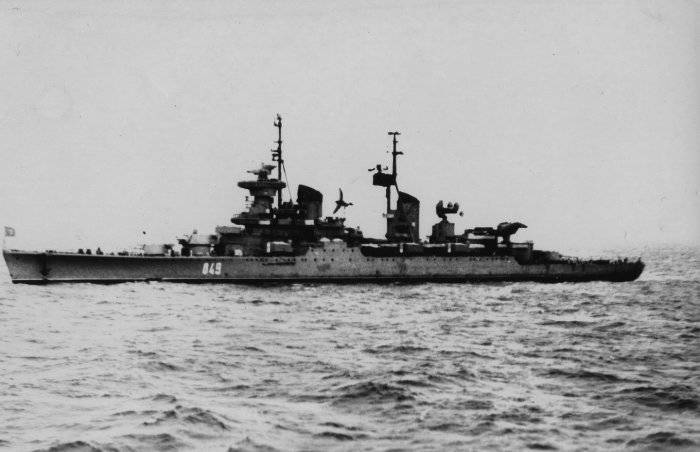 The equipment of the “Quiver” system provided detection and tracking of targets, issued commands to the launcher and the projectile aircraft, controlled its launch and flight. The target was guided along the equipotent zone of the ship’s radar beam, in the last section a semi-active homing plane operated, which received the radar radiation reflected from the target.

The first start occurred in January 1956. In April, the first stage of testing was completed. Of the ten launches conducted at a maximum range of 43 km, 7 were successful. Shooting at a minimum distance of 15 km was less successful. Two of the three KSS passed at a considerable distance from the target.

The commission recommended not to wait for the second test stage, but to immediately start the completion of five cruisers along 67 Ave., in order to hand over equipped ships to the fleet in 1959.

Nevertheless, the tests continued. Some shortcomings were identified. Prelaunch preparation took too much time, and the maximum range of launches was insufficient. Therefore, the mass completion and rearmament of Sverdlov-type cruisers did not happen.

In one of the previous articles it was told about the development of aviation-based KSSH. Now consider the ship modification. 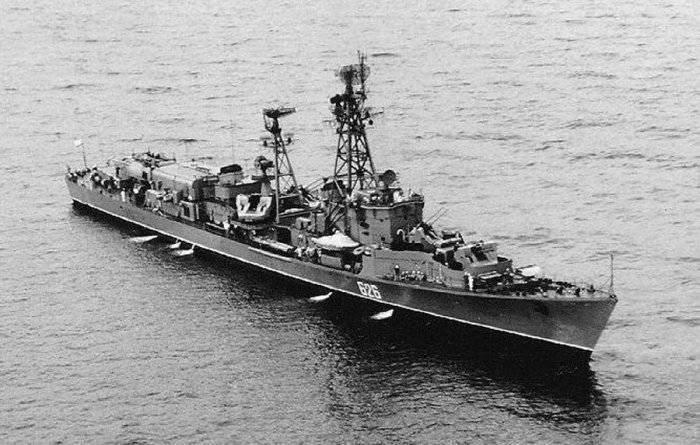 The decree of 30 of December 1954 of the year set the development of the KSSch projectile as the basis of the combat power of the last destroyers of the 56 Ave., it was planned to install 10-14 missiles and two launchers on them. The rocket was equipped with an active radar GPS and detachable warhead taken from the aviation version. The wings of the rocket became foldable.

Over time, there appeared new anti-ship missiles, ships equipped with KSShch, less and less built. However, the KSSch rocket became the first model of the guided weapon, which is the main armament of the ship, and the first Soviet rocket of this type, put into service.

At the beginning of 1959, the technical appearance of the P-35 missile complex was determined. Much was borrowed from its predecessor - the P-5 rocket. There were differences. For example, a thermonuclear warhead was replaced with a high-explosive penetrating one. From 1960, for the P-35, it became possible to use a special warhead. 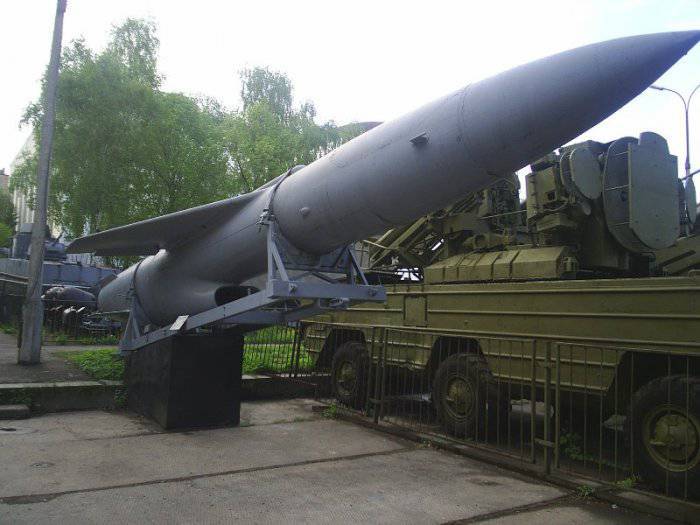 Thanks to the on-board radio equipment, we received and executed radio control commands from the ship, as well as a survey of the sea surface in the ± 40 ° sector, broadcasting the received image to the ship, capturing the designated target, tracking it, and issuing signals to the answering channel. In addition, the “Block” onboard equipment was equipped with an autopilot and a radio altimeter.

Targeting missiles at the target was carried out in two versions. Could indicate the exact coordinates of the target. Also, the guidance could be carried out on the relative coordinates, provided the use of a radar sight. After capturing a target for auto tracking, the rocket was self-guided only in the horizontal plane. Guidance along both planes was possible only on the final segment.

In August 1962, the missile system was adopted. The range of ranges was 25-250 km, the flight speed was 1400 km / h at the final stage, and the target detection range using a radar sighting device was 80-120 km. Auto tracking was possible at a distance of 35-40 km from the target. In the future, the combat qualities of the complex were improved. The new maximum range was 250-300 km.
The construction of ships equipped with P-35 missiles was halted in 1969.

In the future, the missile-carrying ships were upgraded to install Progress missiles ZM44, put into service in 1982 year. This type of missile is characterized by better noise immunity, a larger area of ​​approach to the target. At a lower altitude.

Since the Progress rocket, after it received a target from the operator from the ship, stopped the radiation and decreased, it was lost by the enemy’s air defense surveillance equipment. GOS was included in the approach to the goal, carried out its search and capture. There was no increase in the range and increase in speed, the shipborne equipment and ground facilities were not affected, but significant development funds were saved. The Progress and P-35 missiles were interchangeable.

Ships that began to arm with Progress missiles began to be equipped with receiving equipment of the Aviation target designation system "Success".

The P-15 rocket was developed in 1955-60. The torpedo boats of the 183 Ave had originally become the carrier of the missiles. The first launch occurred precisely with such a boat in the 1957 year, and three years later the missile complex was put into service. At the time of the end of 1965, such boats were 112. Some of them were transferred to another state, China even built them under license. 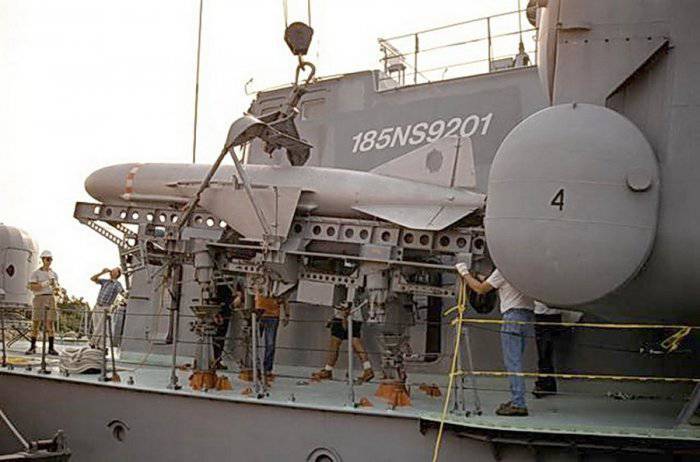 The P-15 missile complex was repeatedly upgraded. In 1972, the Termit rocket complex was adopted, the basis of which was the P-15M rocket.

Missiles belonging to the P-15 family, manufactured by the USSR and China, were used in combat conditions in 1971 during the Arab-Israeli war, in the Indo-Pakistani conflict of the same year, and also in the Iran-Arab war of 1980-88. 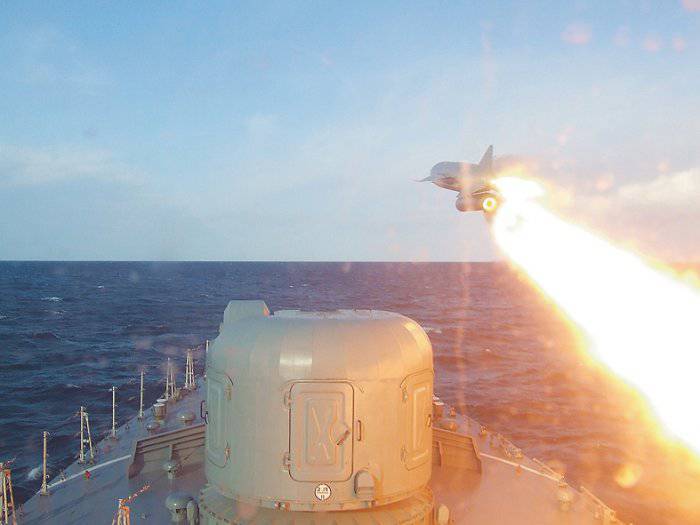 P-15 missiles were also used against the American battleship, which was shelling the coast of Iraq during Operation Desert Storm. One of the two missiles went away due to electronic countermeasures from the enemy, the second was shot down. For the first time an anti-ship missile was shot down in a combat situation.

Since 1996, the production of the same type of missiles began Iran.

Since 1963, the development of the B-500 “Basalt” missile has been developed, intended for use against the enemy’s powerful ship groups. The placement was supposed both on surface ships and on submarines. The P-500 was designed to replace the P-6 missiles, with approximately the same weight and dimensions. In 1977, the Basalt missiles are installed on aircraft-carrying cruisers of the 1143 Ave. eight missiles in launchers and the same number of spare missiles. In the 1982, the cruisers of the 1164 Ave, armed with sixteen missiles, were commissioned. 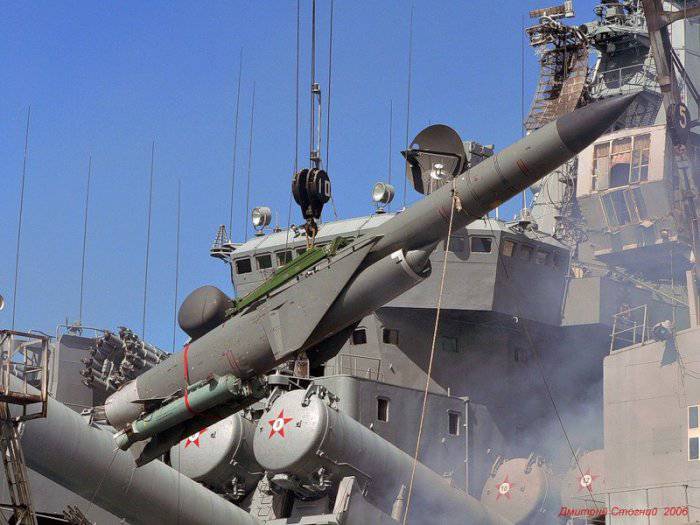 The warhead could be used both high explosive and cumulative, and nuclear. Flight speed reached 2M. The Basalt is the first sea-based cruise missile to develop supersonic speed.

For the P-500, a new control system Argon was created, including an onboard digital computer. SU “Argon”, possessing increased noise immunity, allowed to target the distribution of missiles in the salvo, as well as selective defeat of the main objectives of the connection of the ships. For the first time, an onboard active jamming station was used, which allowed the rocket to be invulnerable to enemy air defenses. 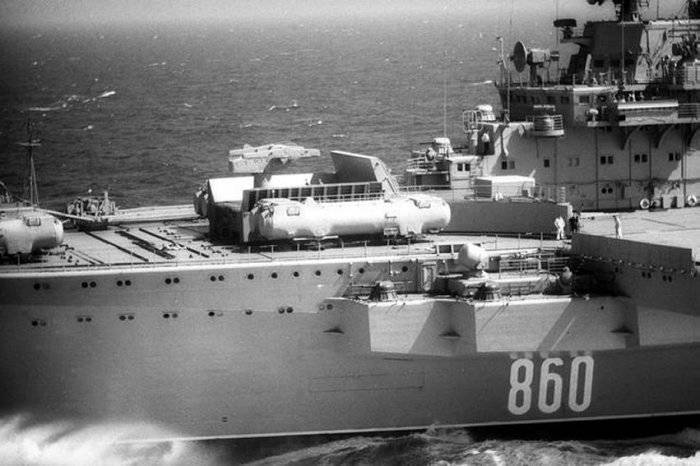 P-500 missiles were designed to fight large groups of ships and were effective only in the salvo.

A further modification, the 4K80 rocket, was equipped with a powerful launching unit, and therefore had a longer range.

Work on the creation of anti-ship missiles "Yakhont" began in the late 1970-ies. The new rocket was designed to combat groups of surface ships and individual ships in the conditions of active opposition, both fire and radio electronic. 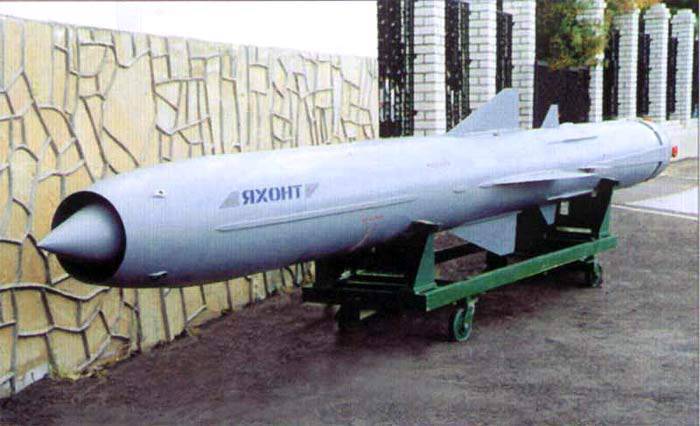 The main difference from the rest of the missiles is the universality of the complex, which can be placed on submarines, surface ships, airplanes and coastal launchers. 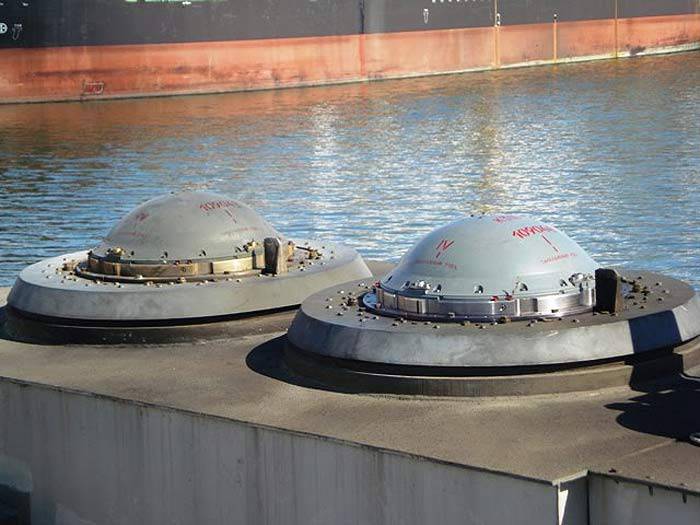 We have previously considered the Yakhont missile as part of the Bastion SCRC. Launchers of very different designs are suitable for Yakhont missiles, so the range of possible carriers is very large. Shelf-type launchers can be used, thanks to which small-tonnage ships of the “rocket boat-corvette” class can be equipped with missiles of this type. 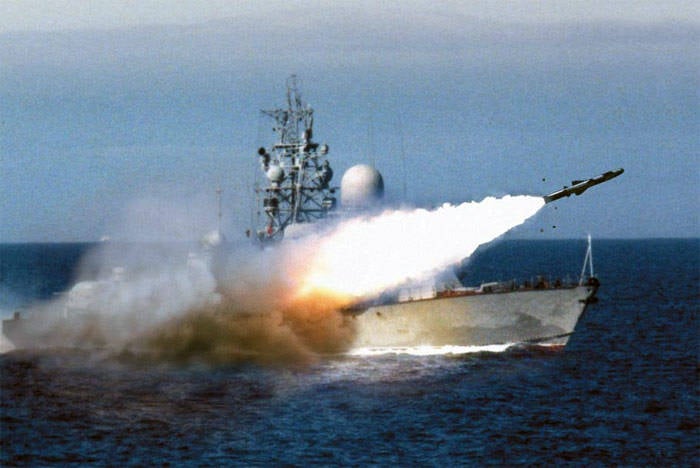 Modular installations allow arming frigates, cruisers and destroyers with Yakhont missiles. The number of missiles that can be installed on the upgraded ship is three times the number of old cruise missiles, such as the P-15.

In 1984, the decision was made to develop the Uran ship complex based on the X-35 cruise missile, designed to equip small boats and medium displacement ships. 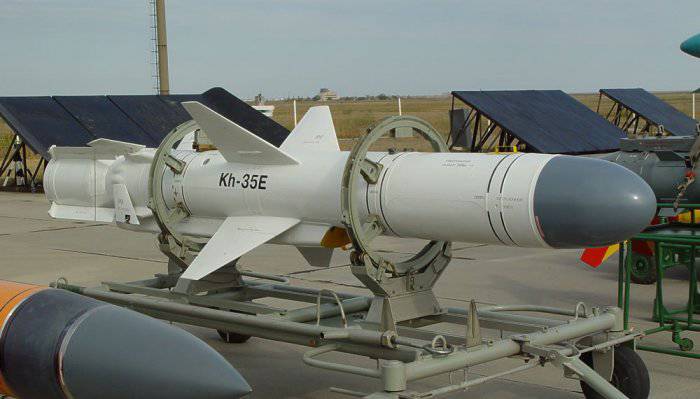 The X-35 rocket (3М24) is designed to destroy landing ships, convoy transport ships or single ships. The use of a rocket is possible at any time of day in any weather, even intense interference and fire resistance from the enemy are not an obstacle to launching rockets.

The advantage of the rocket is its low-level approach to the target, due to which it is difficult for the enemy’s air defense systems to detect and destroy the rocket. The EPR of the rocket is reduced due to small dimensions. The carriers, as a rule, are armed with 8-16 rockets, so that a large number of ships are not required to perform a combat mission. Firing a volley with a missile launch interval in 3 seconds can increase the chance of hitting a target. In addition, the rocket has a lot of opportunities for modernization, for example, the use of energy-intensive fuel can greatly increase the range of the rocket.

Among the flaws of the rocket are the insufficient flight range, due to which the carrier is likely to enter the enemy's air defense zone, and the relatively low speed of the rocket can cause it to be damaged by air defenses. In addition, the missile control system is not designed to hit coastal and ground targets. 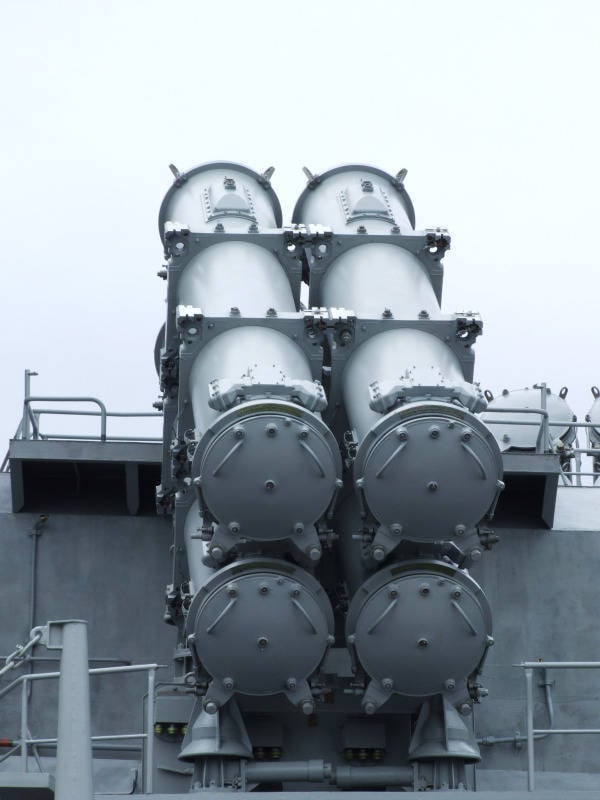 The Uran-E complex is located on new frigates, rocket boats, corvettes, on other ships during their modernization. For example, the power of the new Katran missile boat equipped with the Uran-E spacecraft (8 missiles in two launchers) increases more than three times compared to 205EP Ave. On the boat pr. 1241.8 installed 16 missiles. Targeting is carried out by the sea radio-electronic complex "Garpun-Ball". Uran-E is also installed on ships of the 11541 Pr. Corsair and the Russian corvettes A-1700 for export. 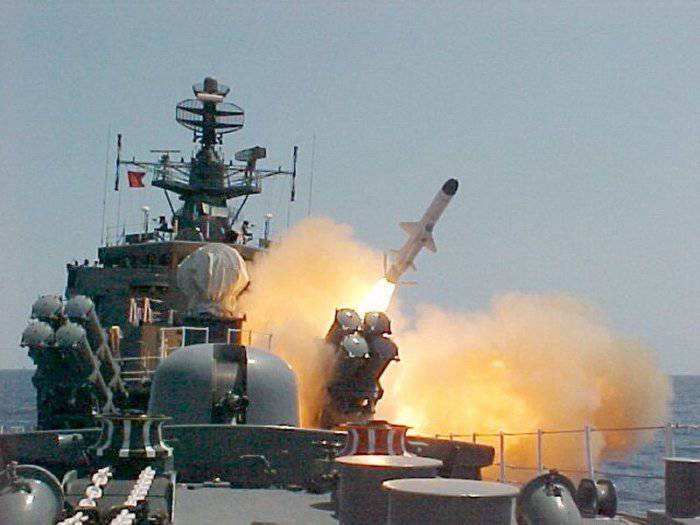 "Uran-E" is fully consistent with international standards, and the ratio of cost and efficiency makes the complex the best choice when performing combat missions at sea using tactical class missiles.

When compared with foreign counterparts, the cost of X-35 missiles is quite low, and the efficiency is at a good level. Nevertheless, the competition with the American anti-ship missiles "Harpoon" and the French anti-ship missiles "Exocet", which have already recommended themselves, will be tough.

Summing up, it should be noted that it was the anti-ship missile that was the first time in the latest stories allowed the domestic fleet, located far from home shores, to really resist the strongest fleets in the world and implement what is called “the protection of state interests”.

We are in Yandex Zen
Project 68-bis cruisers: the Sverdlovs' tasks in the post-war fleet of the USSR. Part of 3
"Svetlana". History of creation
Add a comment
Information
Dear reader, to leave comments on the publication, you must to register.