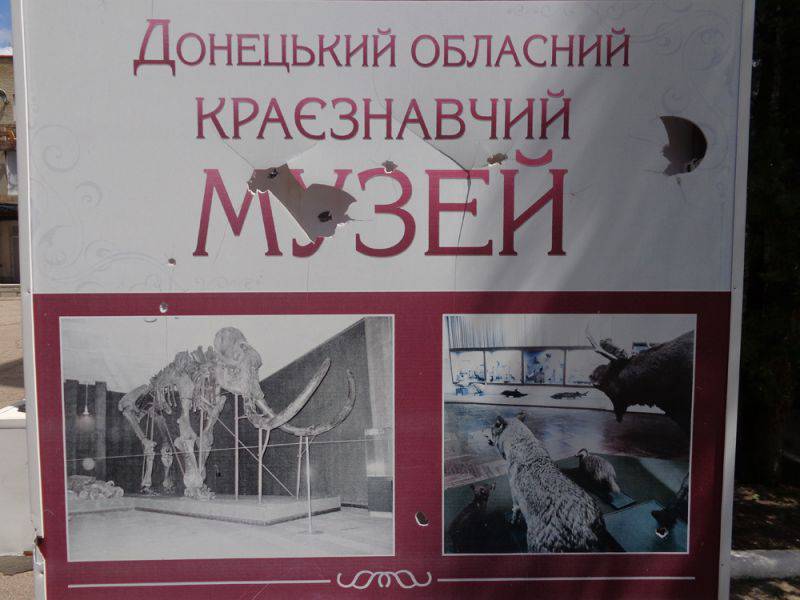 Worldwide recently celebrated Museum Day. In many "churches of culture" were shares called "Night at the Museum." “But this is impossible in our country - military actions, curfew,” say the staff of the Donetsk Regional Museum with chagrin. 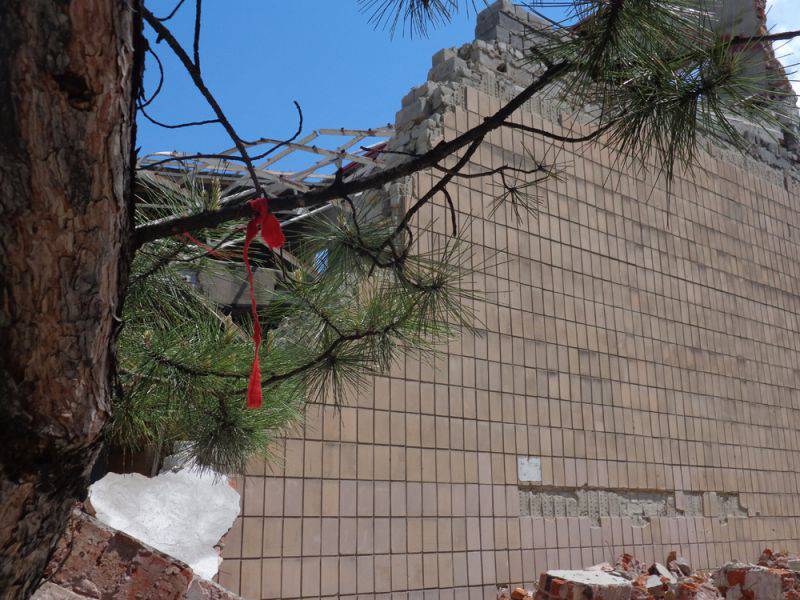 But they did not stay away from the professional holiday - they organized a special exhibition called “70 years later: the fight against fascism continues.” 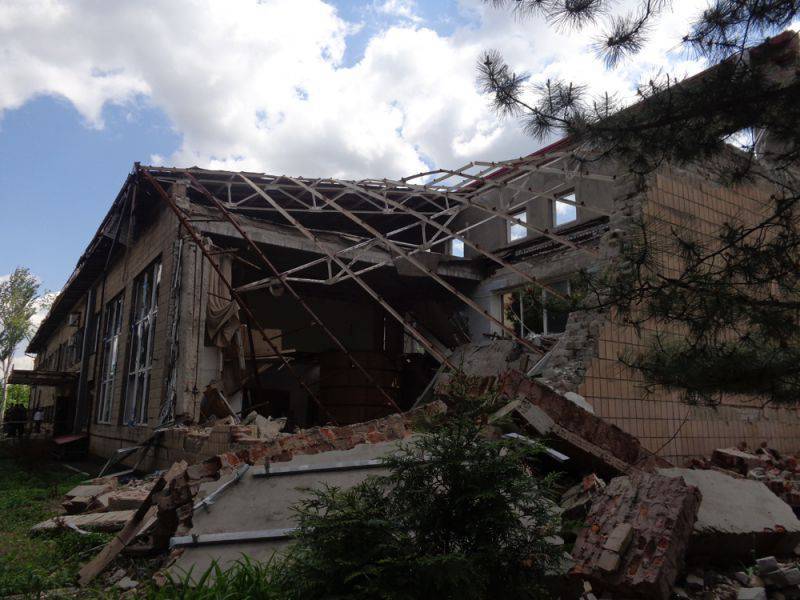 Evidence that the fight against new fascism really continues is generously presented in the exhibition hall: these are fragments of bombs and shells that punished the Kiev junta destroyed Donetsk and other cities of Donbass - Snezhnoye, Ilovaisk, Debaltseve, Gorlovka, Shakhtersk ... 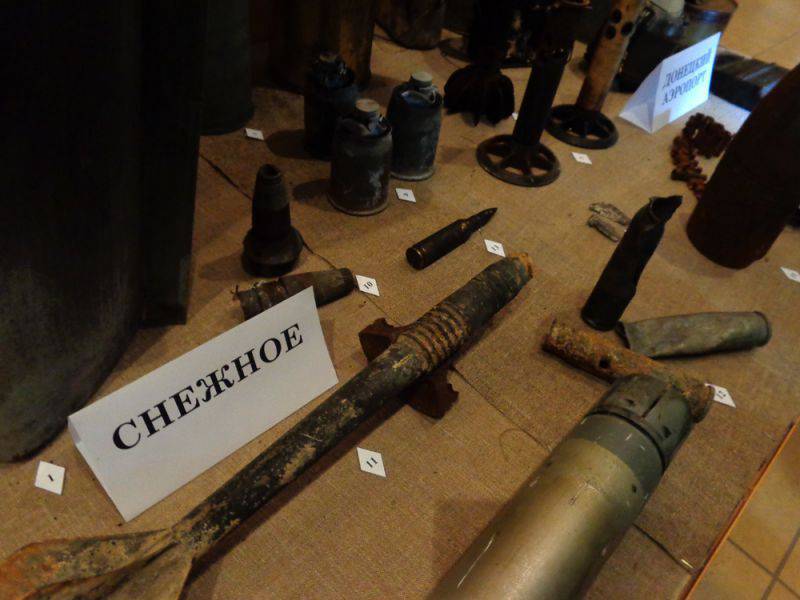 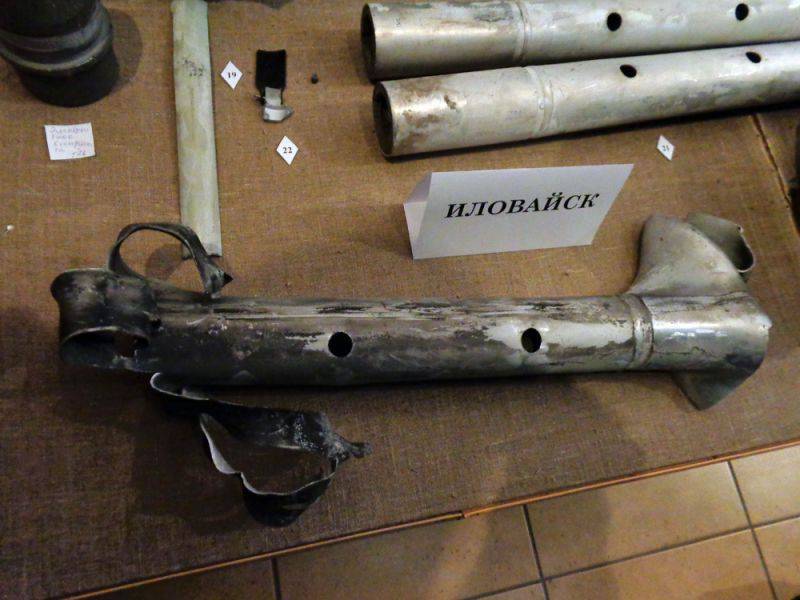 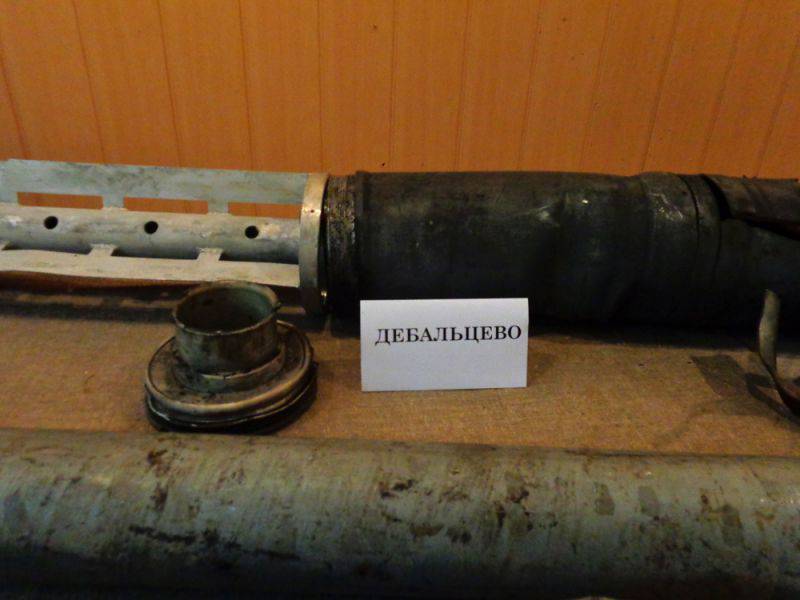 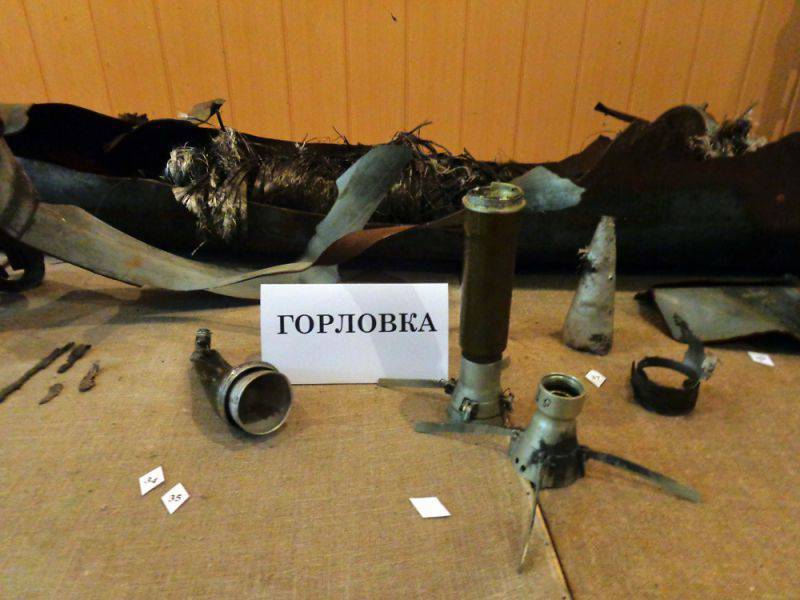 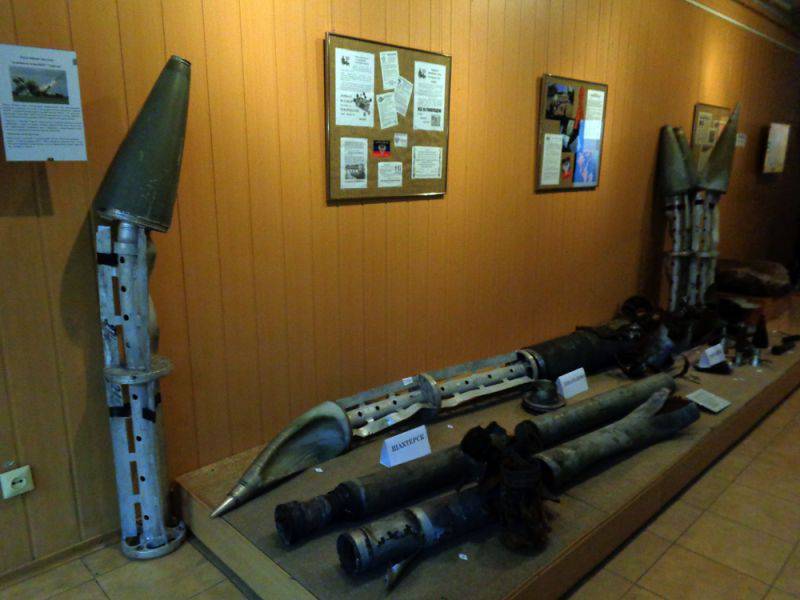 And here is what fell on the Saur-Grave, where one of the most magnificent monuments in honor of the Great Patriotic War in the USSR was destroyed ... 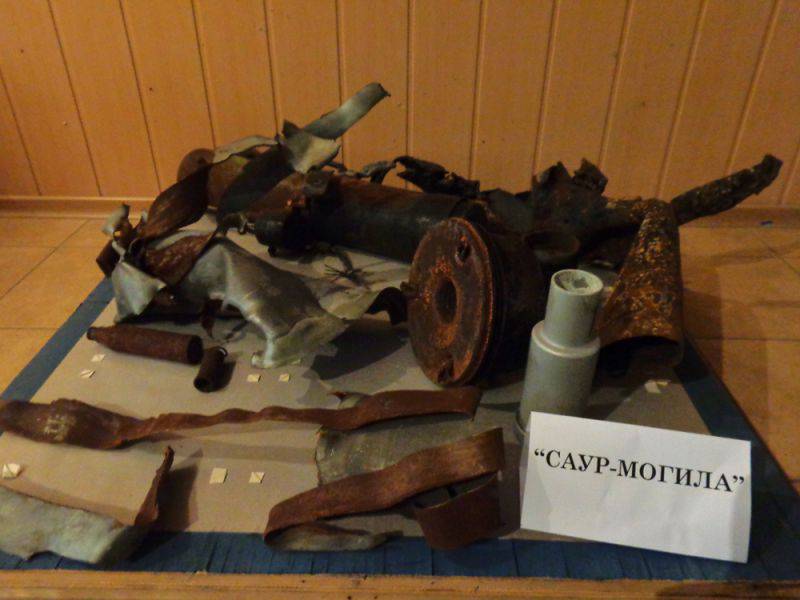 Three times, the Local Lore Museum itself was subjected to the cruel blows of the ukrokaraeley. It happened on the black evenings of 14, 20 and 23 in August of 2014 (neobander fighters preferred and still prefer to fire on the city in the evenings). The strongest gangster attack was 20 August. All the clocks in the cabinets then froze at the 20-40 mark. Fortunately, the museum was closed, there were no visitors, but there was a guard. Only by a miracle these people managed to escape. 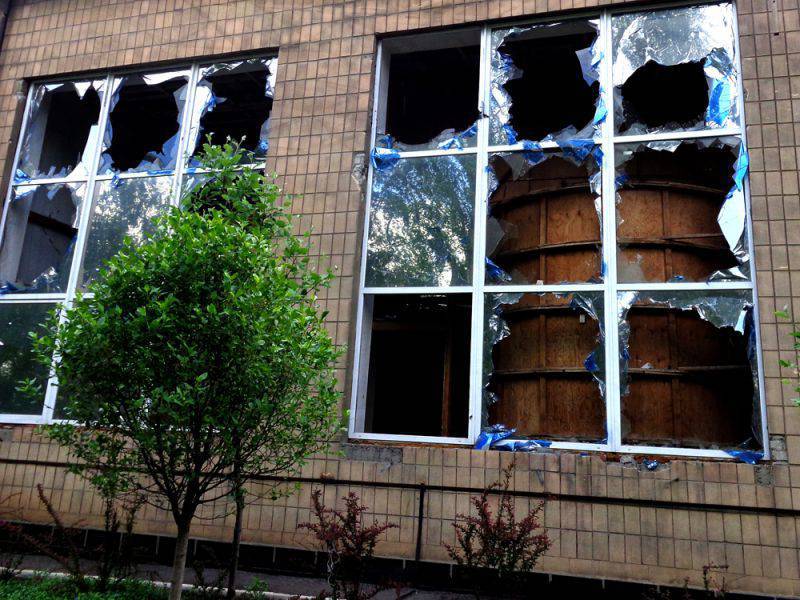 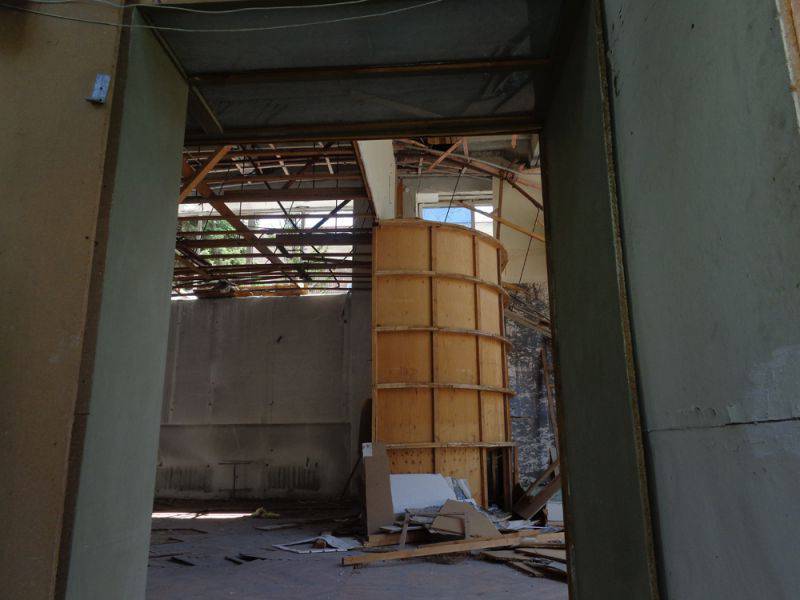 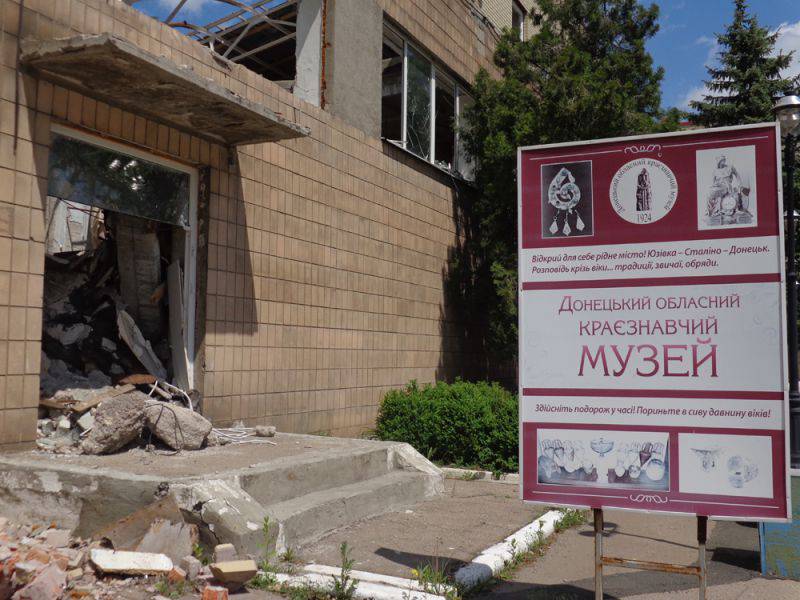 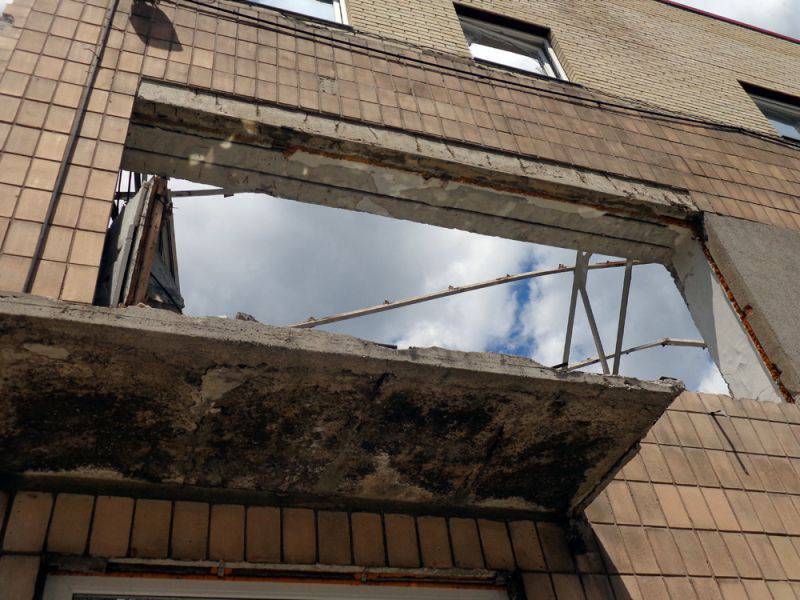 Employees say: when they came to work the next morning, they were just shocked by what had happened. The director of the museum then said: “I will go first,” and only after him the rest entered the dilapidated building.

After the news of the tragedy of the museum was spread around the city, volunteers and ordinary people flocked to it. They helped workers extract surviving valuables from the wreckage. In the building of the Writers' Union of the DPR, I saw a small photo exhibition of Anton Baeshko: a photographer captured Donetsk women who, despite the danger, work selflessly among the ruins and broken glass. Many passersby willingly joined these works. 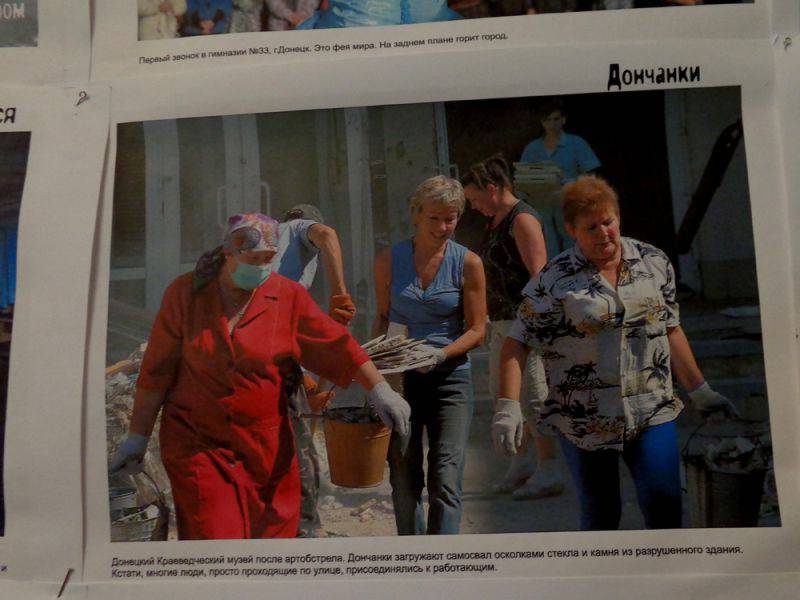 Hardest hit Hall of Nature. “This is a big loss for children. The kids loved this hall very much, ”people say. Now there is little left of him. 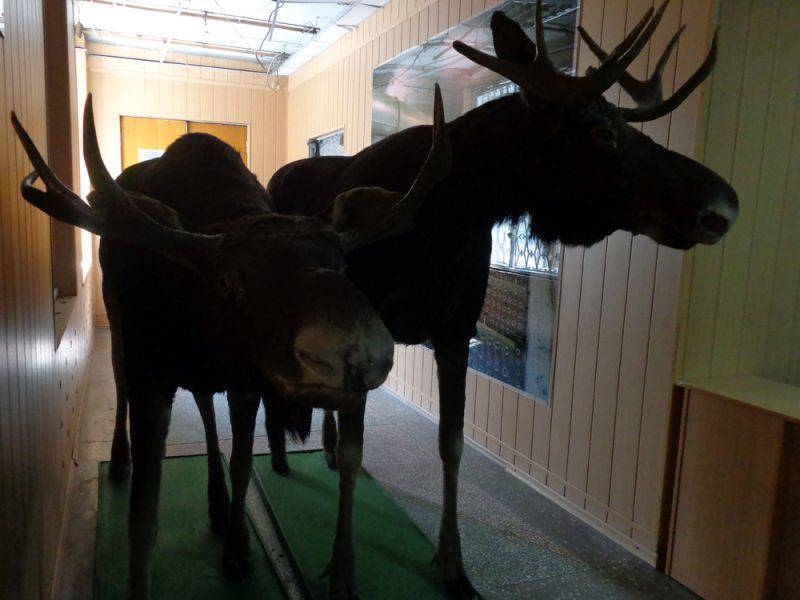 There has also been enormous damage to the storage facility. Damage that cannot be measured with money. And the repair of the building will require at least 100 million hryvnia, which the young Republic today simply does not have.

On one of the windows - the affected exhibits. Ragged stuffed bird. Broken old dishes. A book from a museum shop, pierced by a shard. A spoiled set of cards ... 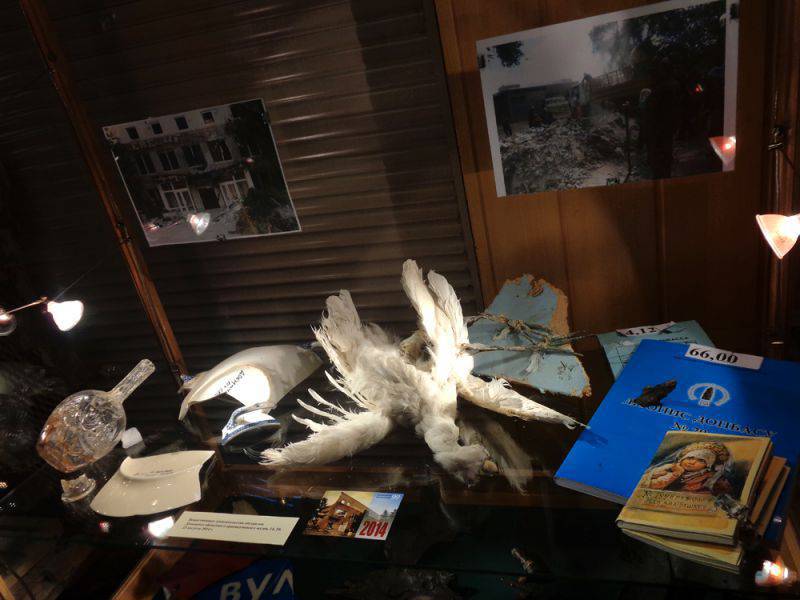 Much can not be restored. Most of the surviving artifacts are now stored in the Museum of the Great Patriotic War in the Leninsky Komsomol Park - after all, in the building of the Local History Museum it is impossible to maintain the desired temperature now. 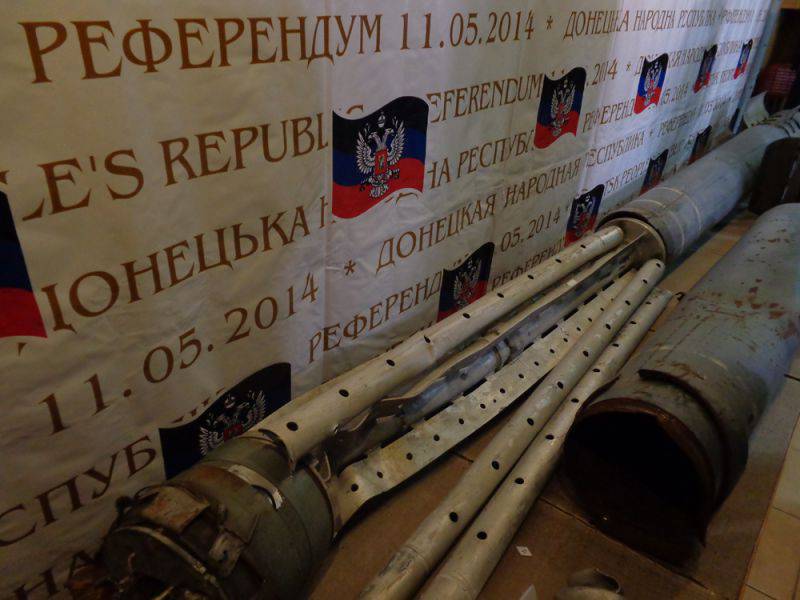 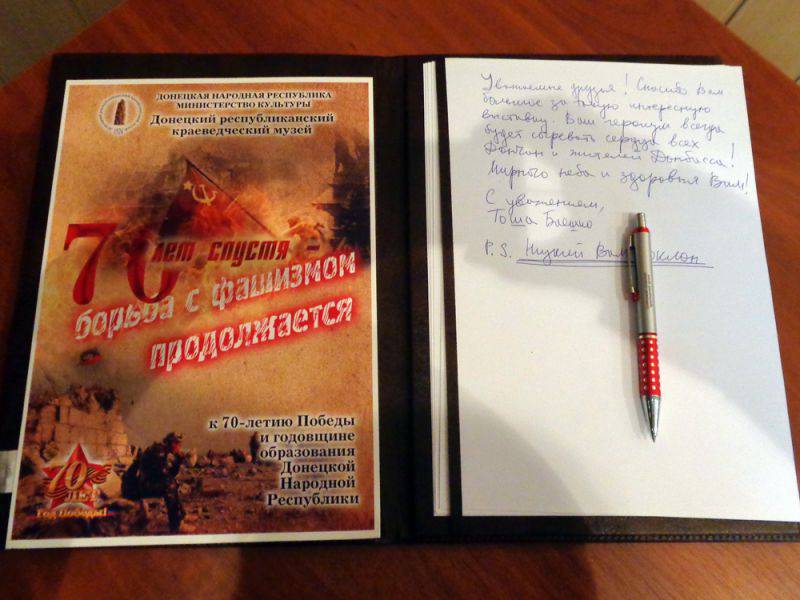 Speaking at the opening of the exhibition, the Minister of Culture of the Donetsk People's Republic, Alexander Paretsky, said that all the 13 museums in its territory work, although three of them were damaged. In addition to the Donetsk Regional Museum, these are also museums in Debaltseve and in the Miner's District.

The head of the administration of the head of the DPR, Maxim Leshchenko, said that the museum itself is now the main exhibit. The authorities, he added, have a plan for the restoration of this cultural institution.

The Deputy Commander of the Corps of the Ministry of Defense of the DPR, Eduard Basurin, presented several books on military awards as a gift. He called on everyone who has any valuable things to donate to the museum in order to somehow make up for the losses. Basurin also sharply condemned Ukraine for what it is trying to erase history Donbass, as well as its own history. 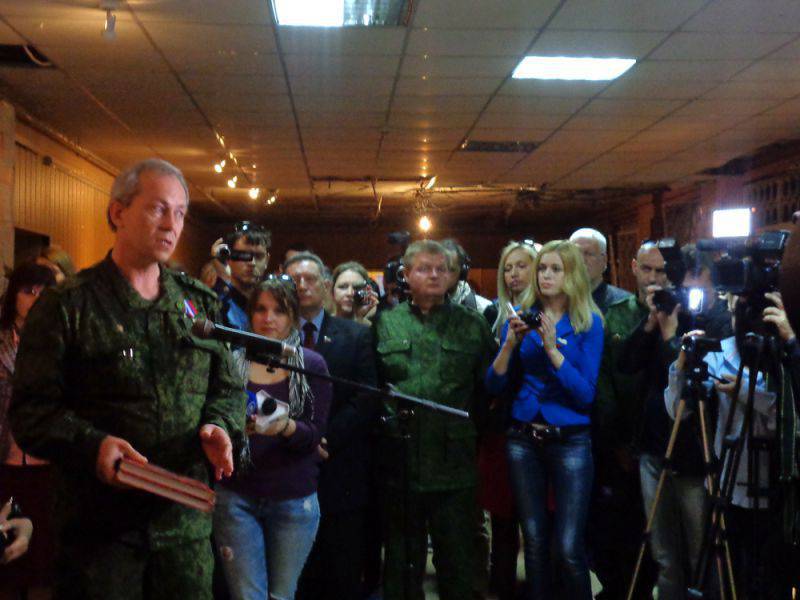 In addition to bombs, shells and debris, there are other exhibits at the exhibition: leaflets and newspapers of the DPR, documents related to the recent history of the Republic, posters, objects belonging to and defended by the Donbass defenders, as well as collected by volunteers. 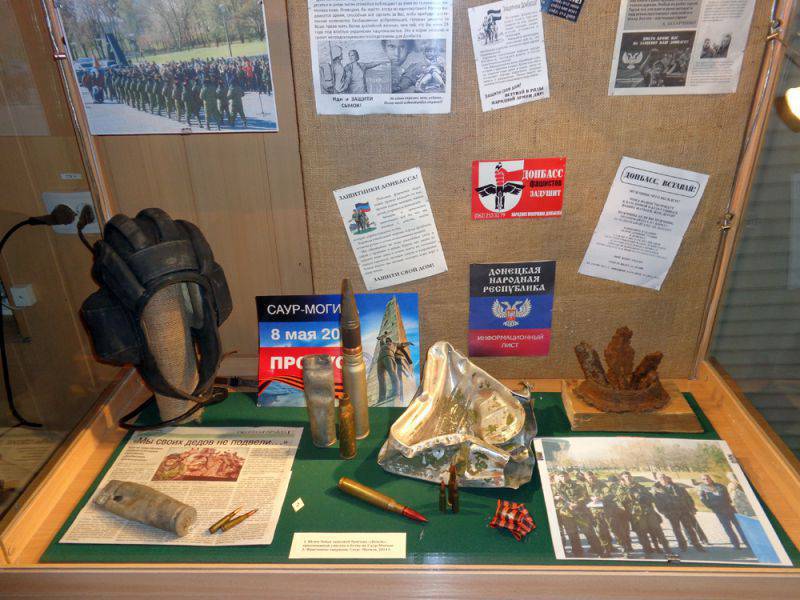 On one of the stands, what was found in the defeated punishers: a pierced helmet, brochures in the Ukrainian language, a yellow ribbon, by which they recognized their ukrovoysk ... The story was presented to them by the unenviable fate - they are both executioners and victims of this vile war. 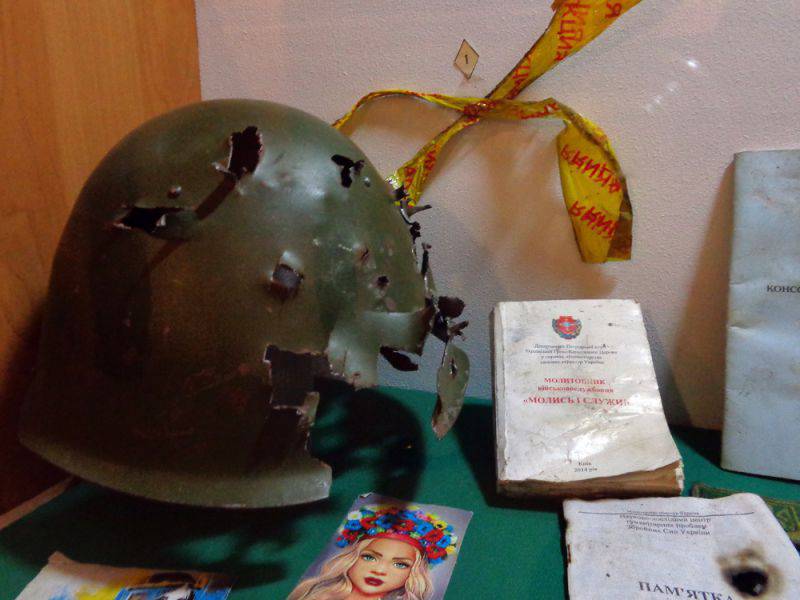 “From Khatyn to Odessa - we will not forget, we will not forgive” - says one of the posters. Residents of the DNI will never forget the terrible tragedy of their brothers in Odessa. Perhaps in this poster - the main idea of ​​the exhibition: the current fascism - almost exactly like the one that was defeated 70 years ago. 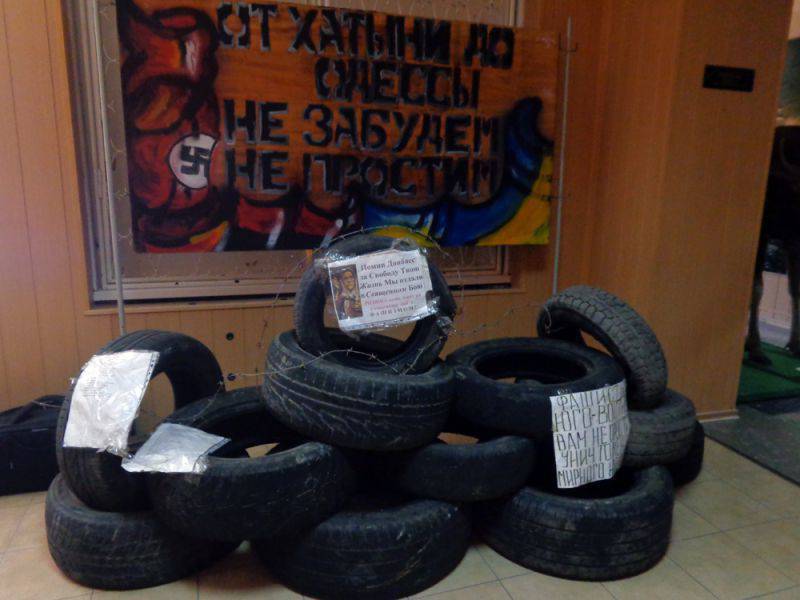 The local history museum was created in 1924 year (when the city was called not Donetsk, but Stalino). During the Nazi occupation, uninvited “guests” destroyed most of the exhibits. Survived only that managed to evacuate. Now the new fascists also hit the museum ...

I leave the building. Journalists relieve destruction. I look into the broken window. A long time ago, some child, hooligans, painted an incomprehensible animal on the museum window, and now - this naive figure has become a reminder of that peaceful life. Life when the museum was still whole. When all the fallen were still alive ... 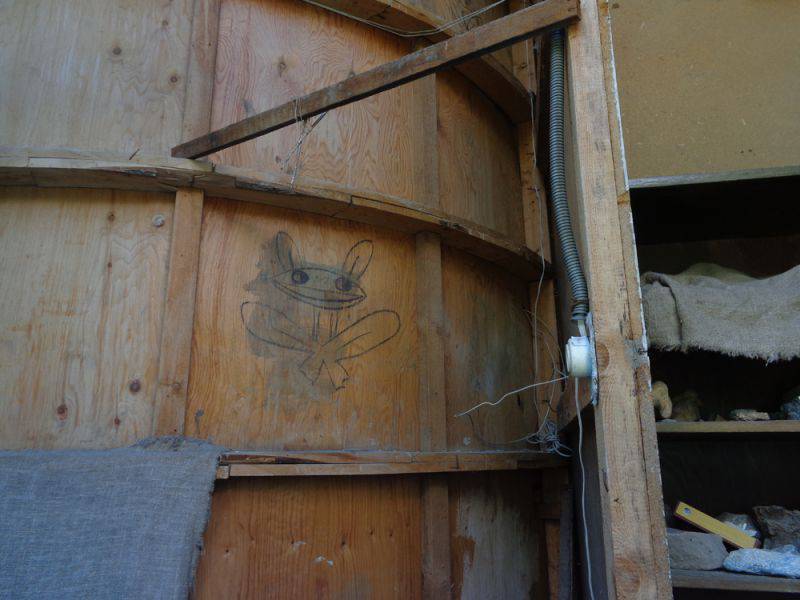 Even those parts of the building that have survived - in the holes from the fragments. Most windows are broken. Only the ancient Scythian women, found in the Donetsk region on the territory of the reserve “Stone Graves”, impassively look at the destroyed wing of the museum, carrying their eternal watch against the background of the wounded wall. 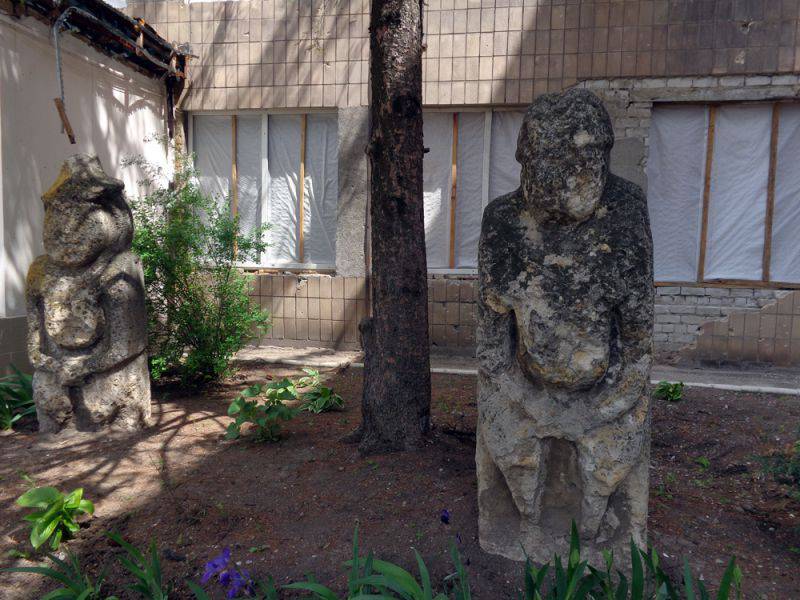 And suddenly among the wreckage I see a sprouted, not yet blossoming tulip. Perhaps this flower is the exact embodiment of Novorossia: so fragile, very young, but, nevertheless, courageously sprouted through stones ... 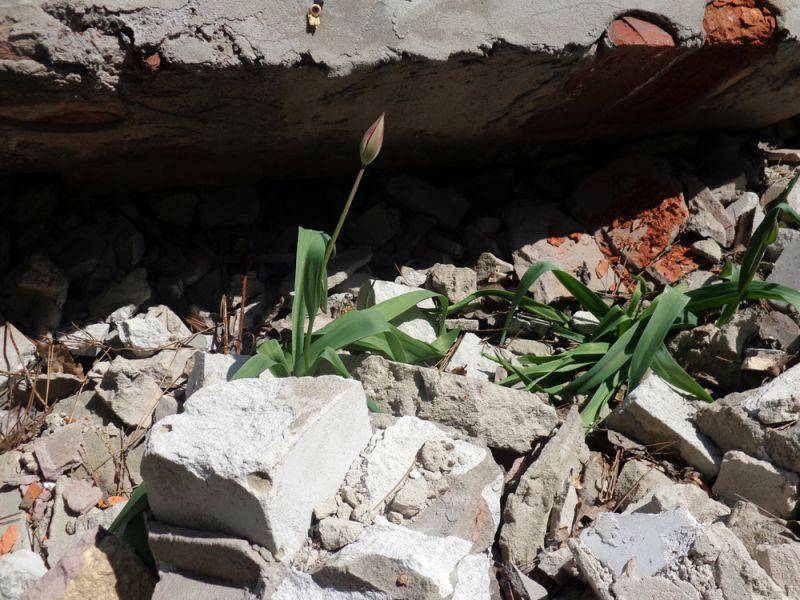