70 anniversary of the Podolsk cadets feat 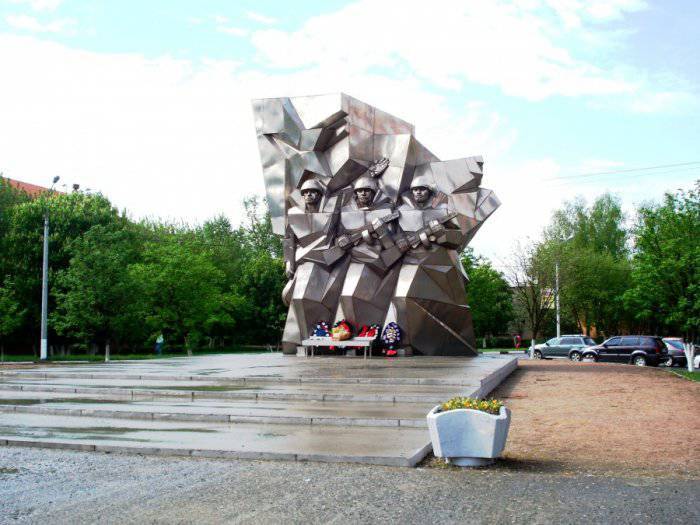 70 years ago about 3,5 thousands of cadets of the Podolsk military schools inscribed in history Russia has one more heroic page. In October, 1941, they stopped parts of the Wehrmacht, which rushed to Moscow.


Podilsk artillery and infantry schools were established in 1939-1940-ies. Before the start of World War II, they trained up to 3 thousand people. The head of the Podolsk Infantry School was Major General Vasily Smirnov, and the Podolsk Artillery School was Colonel Ivan Strelbitsky. With the beginning of the war, Komsomol students from various higher educational institutions of the USSR were sent to these schools. The 3-year study program has been reduced to 6-month. Many of the cadets of the schools had time before they entered the battle, to study only one month - September.

At the beginning of September 30 - October 2, 1941, the Wehrmacht launched Operation Typhoon. On October 5, enemy units captured Yukhnov and reached the approaches to Maloyaroslavets. A gap was formed in the defense of Soviet troops on the Ilyinsky combat section of the Mozhaisk defense line of the capital, which the German command could use to reach Moscow. On the same day, an enemy convoy - 20 thousand motorized infantry and up to 200 tanks, which was moving along the Warsaw highway, was discovered by aerial reconnaissance. 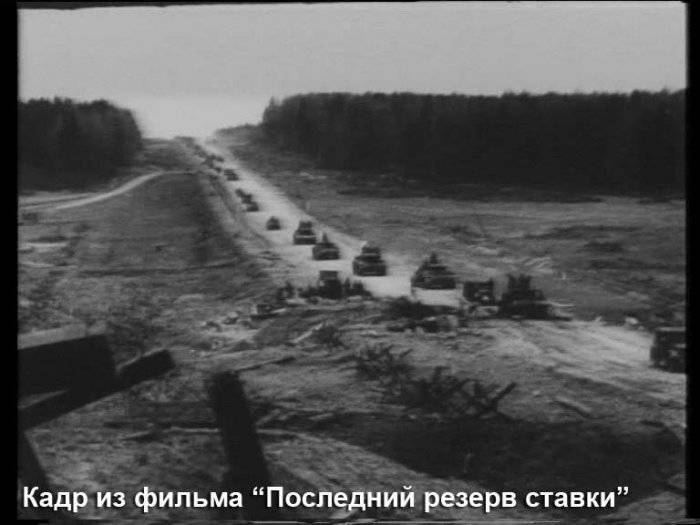 There was no way out, the only reserve. Stakes in this direction were only the young men of these schools. On October 5, about 2 thousand of artillery cadets and 1,5 thousand of infantry school cadets were alarmed and taken to the defense of Maloyaroslavets. The combined Podolsk detachment cadets were tasked with blocking the way for German troops in the Ilinsky combat area for about 5-7 days until reserves were deployed.

October 6 The 1941 detachment arrived at the Ilinsky combat section of the Maloyaroslavsky fortified area and took up defenses along the rivers Luzha and Vypryka from the village of Lukyanovo to Malaya Shubeyka. Two lines of reinforced concrete pillboxes were erected there, but they didn’t manage to complete their construction - there was no disguise, there were no armored rooms over the embrasures. The cadets installed their training artillery guns in the long-term fire points prepared in advance and took up defensive positions at the front of 10 kilometers, only 300 people per kilometer. Together with the locals, they hastily strengthened the boundaries, dug an anti-tank ditch.

Even before the main battles, the vanguard of the cadets met with a detachment of paratroopers Captain Storchak. During the day the paratroopers held back the enemy at the turn of the eastern bank of the Ugra River. Together with the cadets, they decided to organize a night counterattack, it was unexpected for the Germans. The paratroopers and cadets, restraining the onslaught of the enemy, gradually retreated to the main line of defense - on Ilyinsky. For 5 days of battles, they shot down 20 tanks, 10 armored vehicles, destroyed up to 1 thousands of enemies. But they themselves suffered heavy losses, up to two thirds of the personnel died in cadet companies of the vanguard.

In the morning of October 11, the enemy began hostilities - the positions of the Podolsky composite detachment were subjected to massive air strikes and artillery fire. After that, the bridge attempted to cross the bridge with a column of enemy armored vehicles with infantry. But the Germans repulsed the attack. 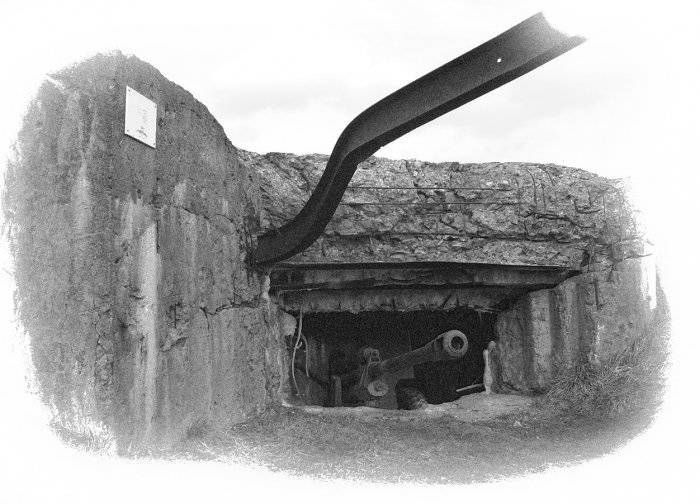 Artillery pillbox to the right of the road in the territory of the museum "Ilinsky Frontiers".

13 October in the afternoon tank forces of the Nazis in the 15 tanks could bypass the 3 battalion, go to the Warsaw highway to the rear of the squadron. The Germans went military trick and to deceive the cadets on the tanks secured red flags. But the deception was revealed, and the attempt to attack from the rear failed. In a fierce battle the enemy was destroyed.

Attempts to break the spirit of Soviet cadets with propaganda leaflets failed. The Red Junkers were called upon to surrender, to break their will with the false report that the Warsaw highway was seized almost to Moscow, and the capital of the USSR would be seized in a day or two. But no one gave up! 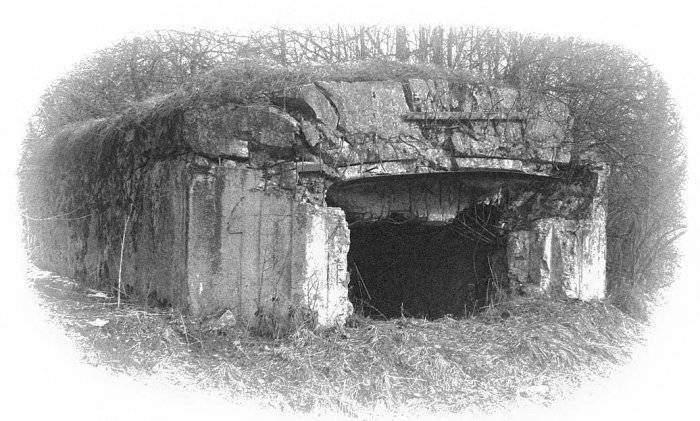 An artillery pillbox to the left of the bridge ... you can clearly see how the concrete is literally blown up by explosions inside - the actin pillbox was shot from tanks.

Soviet youth stood to death, withstanding artillery and aviation blows. The forces were melting, the ammunition ran out, by September 16 only 5 guns remained in service. It was on this day, after a powerful fire attack on the entire front of the defense, the Wehrmacht was able to capture the defensive lines on the Ilyinsky site, and then only after almost all the cadets who defended here died. Until the evening, the pillbox stopped the enemy’s advance on the highway near the village of Sergeevka, they were commanded by the commander of the 4th battery, Lieutenant A.I. Aleshkin. The calculation of the 45-mm gun knocked out several enemy military vehicles. Only when it got dark did the enemy infantry enter the rear of the bunker garrison and throw it with grenades. 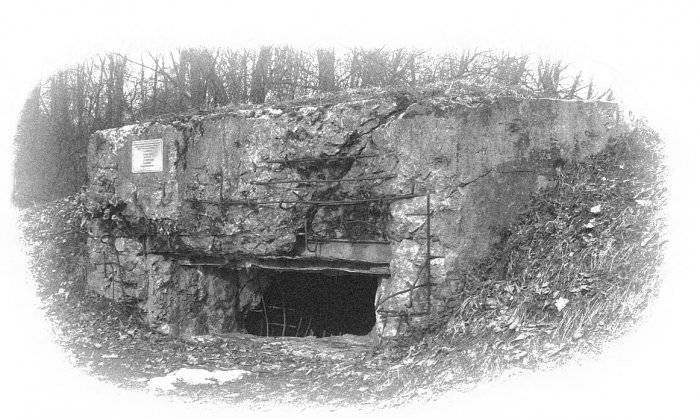 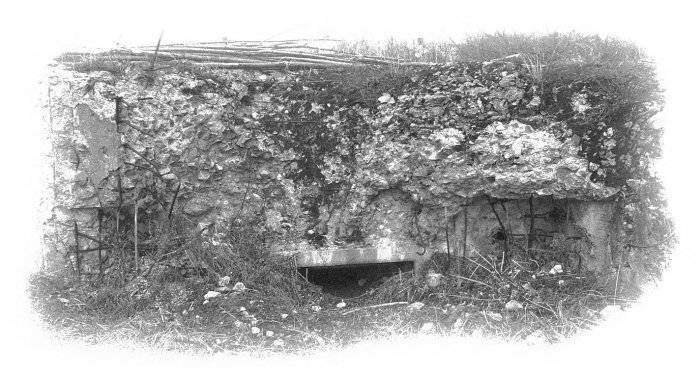 An observation point with an embrasure for attaching a range finder.

October 17 squad command post was moved to Lukyanovo. During the 2 days, the cadets defended Lukyanovo and Kudinovo. October 19 fighters who defended Kudinovo, were taken into the ring environment, but they managed to break out of it. On the same day, the cadets received an order for departure. October 20 few surviving cadets Podolsky consolidated detachment began to withdraw to reunite with the troops who occupied the defense on the river Nara. October 25 sent to his cadets sent to Ivanovo to complete the training.

In this fierce battle, Podolsky consolidated detachment lost about 2500 cadets, while the enemy lost about 5 thousand people and before 100 tanks were destroyed and shot down. They fulfilled their task - the enemy was delayed, time was won. 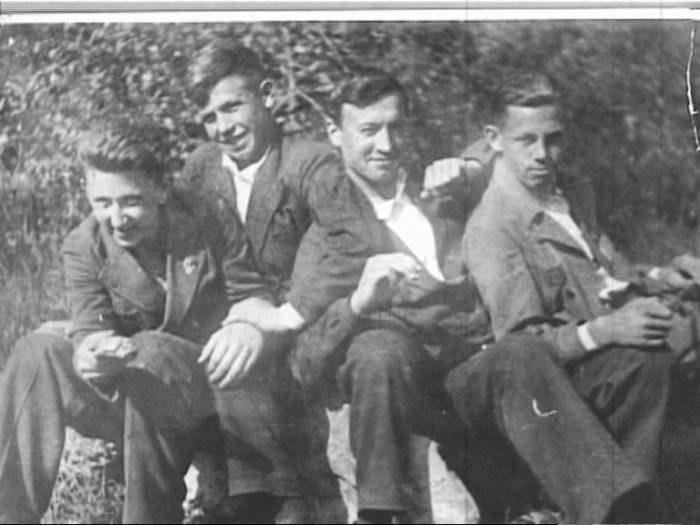 Documentary 2009, 51 min., Russia. Director: Vladimir Novikov. In the fall of 1941, the Nazi troops, breaking through the defenses of the Red Army, were approaching Moscow in marching orders. Supported by aviation and artillery on the Warsaw highway moved more than 200 tanks and 20 thousand foot soldiers. The road to the heart of our Motherland - Moscow was open. The only obstacle in their path was the last reserve of the Bet - Podolsk cadets. The film uses the unique newsreel of the State Archive of Film and Photo Documents (Krasnogorsk), as well as the German trophy newsreel of the State Film Fund of Russia.

We are in Yandex Zen
The artist, the wanderer, the warrior. Vasily Vasilyevich Vereshchagin. 110 years from the date of death
By the 70 anniversary of the counter-offensive, as typhoon was tamed
10 comments
Information
Dear reader, to leave comments on the publication, you must to register.