19 May 2015
102
At the 79 year of life, Yury Mikhailovich Luzhkov suddenly realized that not only was the Russian economy “not viable”, it was also “anti-people”. The terms are presented in quotation marks due to the fact that the former Moscow mayor responded precisely to the Russian economic system. In revelations with a journalist "Komsomolskaya Pravda" Alexander Gamov, Yuri Luzhkov, now engaged in farming activities in the Kaliningrad region, said that in Russia “terrifying pricing”, and that about 80% of profits from the sale of agricultural products are not farmers, but dealers. According to Luzhkov, this is a sign of a “monopoly, not a competitive economy.” 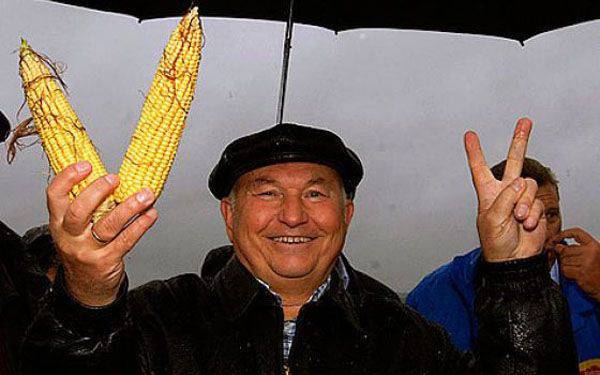 In this case it’s hard to disagree with Yuri Mikhailovich. Indeed, the average domestic agricultural producer, forced to repay loans taken on agricultural activities, hardly even goes to the minimum profit (if it comes out at all and does not go bankrupt). But the network of dealers for themselves is welded on the products of super-profit produced by the farmer, becoming, in fact, in a privileged position - in a position higher than the producer of agricultural goods directly. The situation is not that strange, it is truly blatant. However, this is not the case.

The thing is that Yury Mikhailovich Luzhkov, who served as the mayor of the Russian capital for more than 18 years, came to understand that in the Russian economy he gives anti-people only now ... Heading the center of the economic and economic activities of the Russian Federation, Mr. Luzhkov is strange In other words, he passed by the fact that in Moscow itself a monopolistic economy was being sent for years, that an ordinary farmer could not reach the Moscow metropolitan stalls with his goods, bypassing the network of resellers, that Moscow’s market and became mainstays of the real mafia, divided spheres of influence.

18 and Yuri Mikhailovich over the years do not seem to care about these facts. And now - when he decided to try on a farm “kirsu” for himself - Mr. Luzhkov not only declares that such an economy in Russia does not allow to develop, but also tells journalists that he is addressing the country's top leadership with his own (nurtured) program to bring the economy to a competitive base.

During the acquaintance with the expressions of indignation of Yuri Mikhailovich in relation to the Russian economy, one can ask the following question: does this mean that any Russian official before being approved for the post of manager needs to start, as they say, on the ground? .. After all, it often happens that a Russian official becomes an official at all not because he has experience of positive economic activity, which has contributed to the improvement of the economy of an individual subject (from an ordinary economic entity) I am up to the subject of the federation and the level is higher), but only because ... it happened. - The system of financial and envelope offerings, or trite "papa-mama helped" ...

Naturally, if such a person sits for years in his leather chair, without tearing off, excuse me, his ass, then he is hardly particularly interested that somewhere in the agrarian (and any other) industry there may be complete chaos. It is unlikely that such an official is interested in what is happening outside his office at all if it does not affect his personal well-being. As long as such an official doesn’t have questions, his philosophy of “Who lives in Russia is good?” And “Why has the economy not yet turned its face to the people?” Style will also interest him a little ...

But if the official (former, present or future) feels the full “charm” of economic activity, as they say, from the plow (from the machine, etc.), then the level of understanding of the problems with the diversification of the Russian economy and the management system will not be better than .

How can you not remember the epochal Klichkov's “Preparing for the Land ...” This phrase, as it turns out, can become a real motto for all those who are really going to work on improving the efficiency of economic management while also complying with Russian legislation. In the meantime, using an example, Yuri Mikhailovich, it turns out that everything is exactly the opposite for us: the incumbent manager often doesn’t care about the destructiveness of monopolism and corruption, and as soon as this manager loses a big post, he begins his sophistry about , you know, is going to make life in the country better and more correctly. Where were you before? ..