Black and white of modern patriotism. A word about the museum 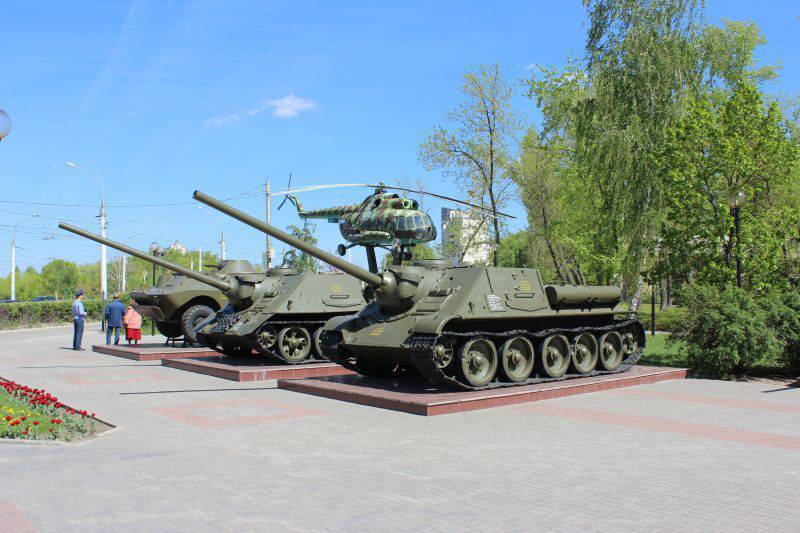 The museum is a serious thing. Museums should not be approached without respect, as they are vaults. stories and memory. There are museums, having been in which once, you catch yourself thinking that it would be nice to return there again. Because the spirit, memory and pleasant pastime. For me, this discovery was the museum in Prokhorovka.

But there are unpleasant exceptions. About such an exception, which became for us with Alexei Volodin also an unpleasant adventure, I want to tell.

It was 14 May. We met with Alexei near the museum "Diorama". The fact is that a team from the “5 channel” gathered to interview him. About one of his articles. Well, the federal channel, interested in the opinion of the author of "Military Review" - this is interesting. And since it was a matter of very, very near-patriotic matters, we didn’t invent a better site than the Park of Patriots. Interviews on the background of the museum, over which the red flag flutters, - well, what could be the best background for an interview where the BBC and their minions would get what they deserved?

But it turned out that 5 or 10 minutes before the start of the shooting came down clouds (that's really suddenly swooped in) and such a downpour rushed that there was no talk about shooting.

And we rushed under the protection of the museum walls and canopies.

The security guard, a gray-haired retired 60, very hospitably opened the door in front of us, and we flew into the waiting room. We were invited to see the exhibition, especially since there was not a soul in the museum. I confess to our common shame, we have not visited Diorama before. However, I planned to make a report on the model and likeness of Prokhorovka, Tula, Belgorod.

Began to figure out how to do it better. And he began to ask the staff of the museum. I was immediately pointed at the signs hanging in every corner: "Photo and video shooting are prohibited." Well, this is not surprising, some museums generally take 50-100 rubles for shooting separately.

However, it turned out that in our case, everything is a bit wrong. Entrance to the museum is absolutely free. What surprised and pleased. But shooting ... No, there is a way out. Since the museum serves some private collections, as I was told by an employee, there is a piggy bank for “voluntary donations”. Donated - and take off, as much as necessary. My attempt to find out how much to voluntarily donate did not bring any result. The size of the goodwill is entirely under the authority of the museum director.

I left this question for later, especially since the guys from the film crew, realizing that the rain had charged for a long time, asked permission from the museum staff right in front of the entrance and withdraw this interview.

First, dear ladies and a representative of the security were seriously worried, since "it is forbidden to take pictures." However, the guys from the film crew reassured them that not a single exhibit would be in the frame. And only the wall next to the entrance door will fall. Well, as if the museum staff decided that there is no crime in this. And allowed to shoot.

Naive we are all the same.

Around the middle of the interview, a little man appeared at the entrance. Seeing the camera, he fell into some stupor. And then he asked me what it was. Well, as best I could, I explained. Then he heard the terrible word for him “BBC”, he rolled his eyes and trotted up to the top.

After some time, the whole procession was already descending the stairs. The first was, as it turned out later, the museum director. Elegant lady nice appearance. This gentleman was hovering around her, and he constantly said something to her. I pricked my ears and did not believe them.

Phrases that fell from this yet unknown gentleman would be more suitable for the Soviet film 50-60's. "I draw your attention ... they talk about the" BBC "... disgrace ... connivance ... loss of vigilance ... I immediately saw how, signaled ... need to react ... would you order to stop the disgrace?"

Here I already fell into a stupor. But time fell out of it and for the second time explained to the director who we are and why. “Stop? Accelerate? ”- continued this fine small. "Not. Let them finish. Then sort things out, ”was the great answer. And the lady swam past the group into the street.

Meanwhile, Volodin ended his conversation. The group's senior asked if anyone had anything to add. The gentleman who rode up at the security console jumped up, and immediately switching to an ultrasound, he demanded that we leave the premises. While the TV people were winding up the cables and packing everything else so as not to get wet, the lord, who turned out to be the deputy director for the utility, continued his high-frequency business.

To say that we were asked some questions, it is impossible. Nothing was asked of us, and if something was in an interrogative form, then no answers were required. More precisely, they did not interest this Vadim Yuryevich, a retiree from the FSO.

He simply squealed, accusing us of every imaginable and unimaginable sins and violation of the laws. What - a separate question. As Volodin and I understood, all our fault is that, out of habit, we solved the question with a minimum of actions. And you had to go upstairs and ask permission from the director. Leaving the museum, we really told each other that it was good, they say, that they did not. It would definitely not be allowed. And even though the job is done.

It would seem that here is this? The federal "5 channel" and the federal media "Military Review" on the territory of a municipal institution such as a museum made material telling what Mr. Sapozhnikov is a bad person, since he gives such empty interviews to "Bi-bi-si". That's it, finish. All the good fellows, because they did the right thing for the country. We are not advertising removed, in the end ...

No, it was necessary to agree, approve, settle, and then how would something not happen. Well, as a result, having received a number of humiliating statements, we were expelled from the territory of the law under the rain.

Speaking of compliance. While Vadim Yurievich was screaming at us and stamping his legs, his immediate superior smoked all this time. On the street. Directly on the territory of the memorial complex. To the left of the entrance. And went inside only after our departure.

That's who there is talking about compliance with the laws after that.

But the story is not over, you should not relax.

The next day I reappeared in the museum. Actually, I also said on our first unsuccessful visit that I was going to make a report on Diorama. Well, I came as promised. The clerk of the supply manager is screaming, and I wanted to make a report.

He took with him a bag with equipment, put on a formal dress and arrived.

They met me on the way. Apparently, I underestimated the modern means of technical control. Because the guard (already another) approached me exactly with the question to whom I am. I honestly said that to the museum. That I am a correspondent and I would like to make a report about the museum. About what yesterday warned the authorities in the person of Vadim Yurevich.

“You see,” said the museum guard with an unexpected reproach. It seems that I asked him for the keys to the MI-8, which is on the exhibition of technology, to cut around the city.

Actually, that was it. The headmistress was very busy, and I couldn’t give 5 minutes. But all she had to do was tell me the amount of “voluntary donation”, so that the museum would cease to be a secret defense plant for me. The first deputy director (there is, it turns out, such) was also very busy. Without even introducing himself, he said that he would do it, how he would be released, and left.

I stayed waiting under the watchful eyes of two female employees in the 20 square meters. When I got tired of standing, I began to move along the walls with the exhibits. Then they threw all their affairs and glared at me. It was a bit uncomfortable.

Minutes walked, deputy directors occasionally ran past me. Vadim Yuryevich persistently turned away and pretended that we were strangers. And that I am a candelabrum of the Petrine era. The headmistress stubbornly sat in the office.

In general, when about forty minutes passed (37, if specifically), I decided not to play these games anymore, and headed for the exit. No one stopped me, the guard watched with visible relief. Well, love can't be forced.

That was how my attempt to make a report on the Diorama super-secret museum in Voronezh ended in complete failure. Strangely, I made materials about museums in Volgograd, Belgorod, Tula, Prokhorovka, and I was sure that I would do more than one. Not everyone can see what is thousands of kilometers away. And in all cities I met only openness and goodwill on the part of museum workers. In Prokhorovka even T-34 was allowed to climb. Only my dimensions are not allowed. And people are allowed.

But, apparently, the museum "Diorama" in Voronezh has its own laws. Well, sorry. But nothing more will not add here.

For contrast, I will tell you about another museum. He is strange. He is, although he is not. To my great regret, at that moment, when I got to him, the founder, director, curator and guide in one person (reminded: we wrote about the museum in the Chukal VVVIUL, the same situation) was in the hospital, so the visit was crumpled up .

But here. Museum created by Afghan soldiers. Located in the premises of the regional organization "IVA" - "War Invalids in Afghanistan."

Admission is free. In principle, this is because the exhibits simply lie and stand where there is a free corner. That is everywhere. But this is not just a warehouse of exhibits. This is an exit museum. They take him to where he is needed and show and tell. In schools, colleges, summer camps in particular.

The question that this museum needs at least a small, but its habitat, hangs years. And, apparently, will hang as much again. So, at least, the chairman of this organization, Nikolai Vasilyevich Priymenko, believes. Which, nevertheless, continues to upholster and prove the need not for a miserable existence, but for the full life of this museum.

I am not going to comment on anything, I am sure who was "behind the river", he will appreciate the work of those who gathered this exhibition. 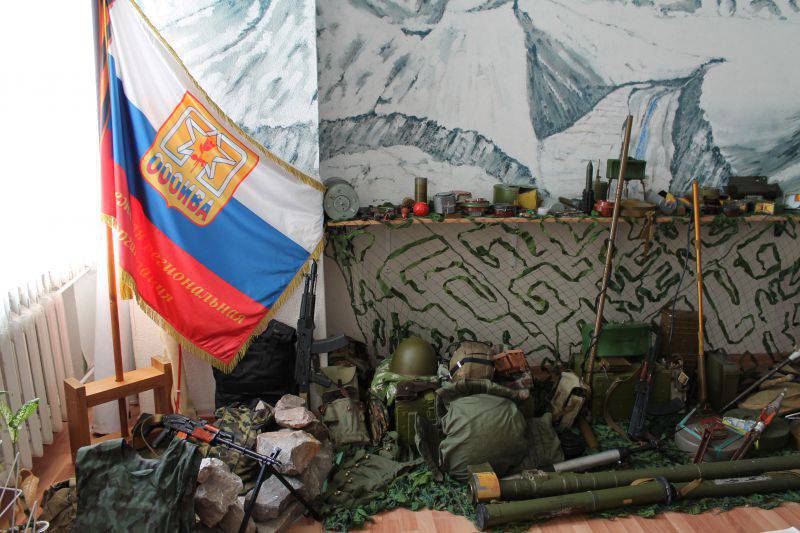 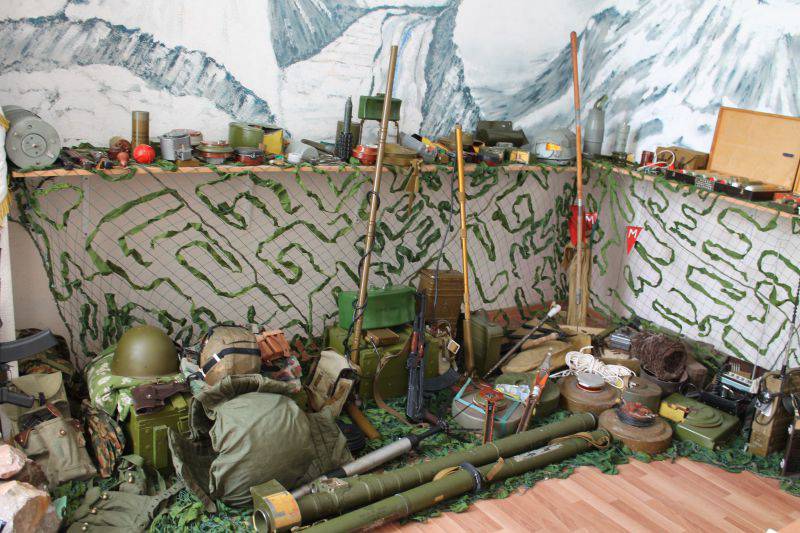 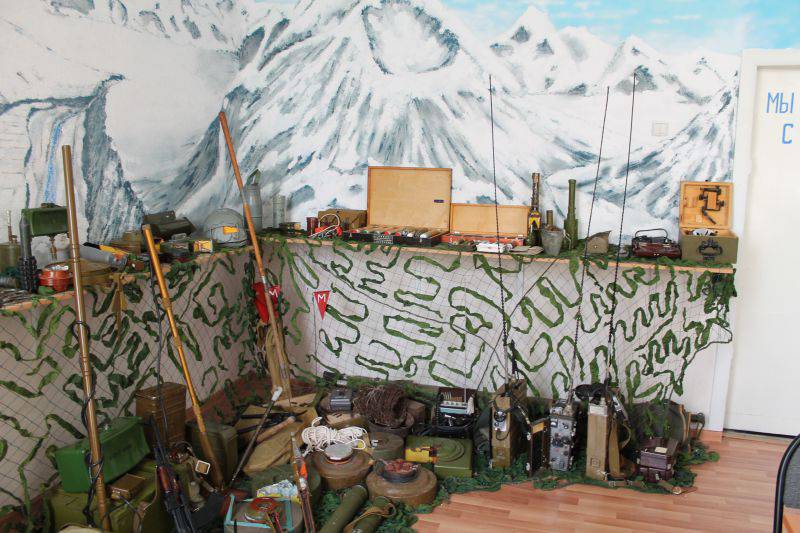 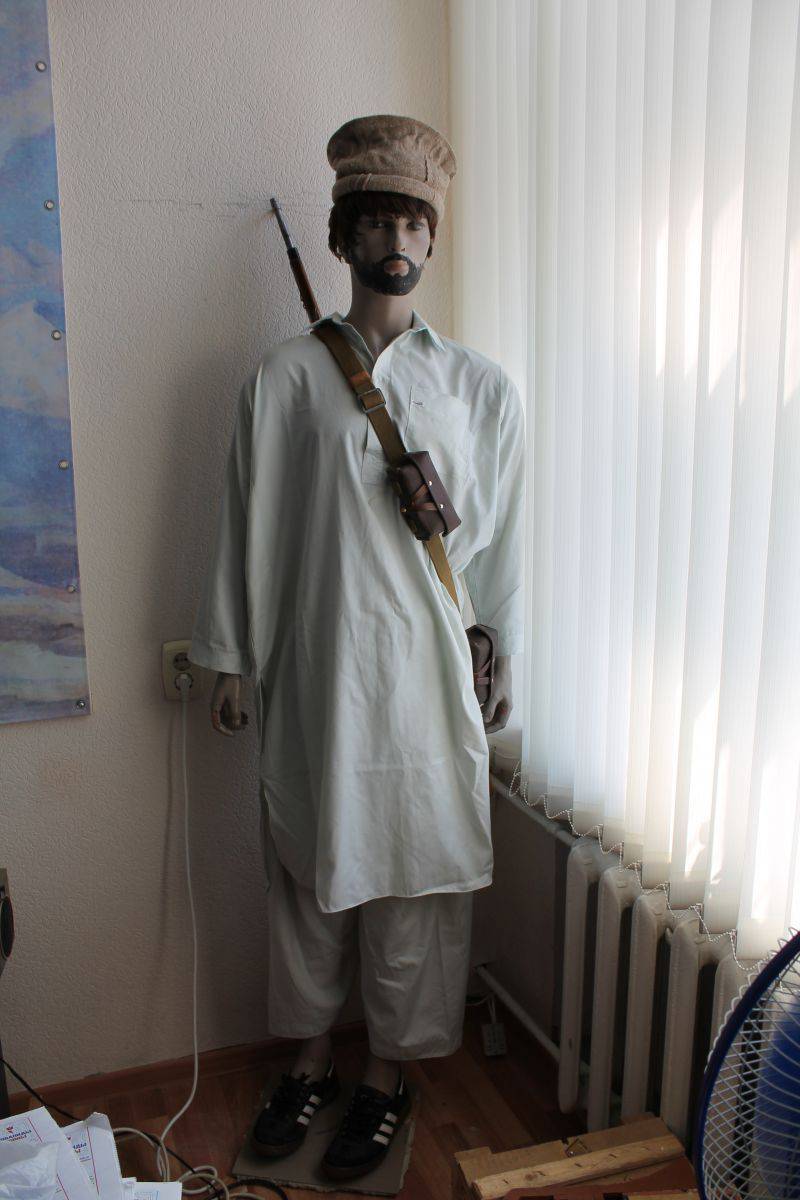 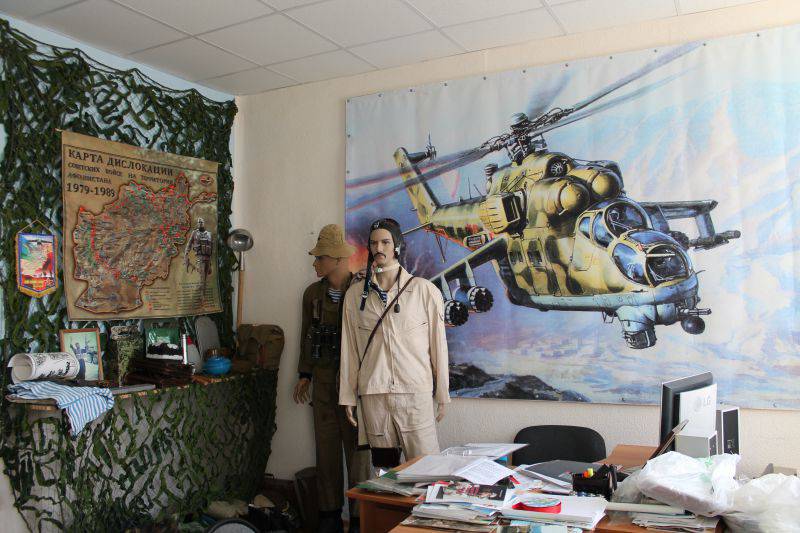 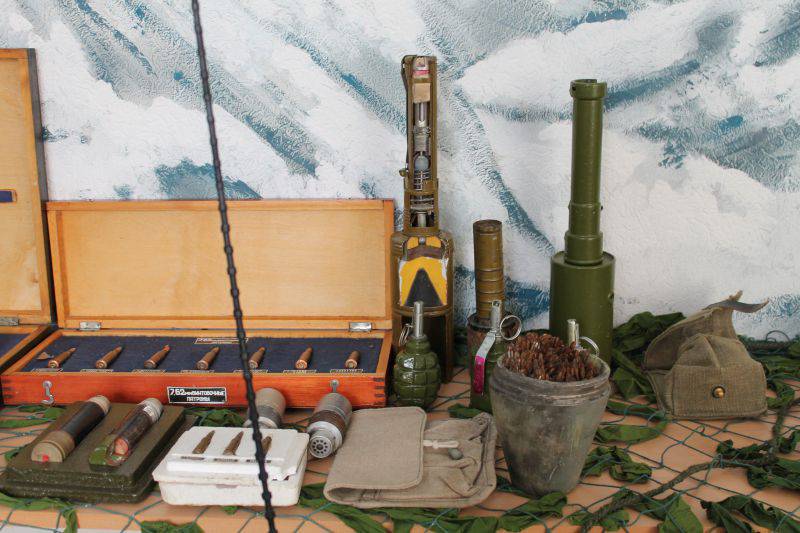 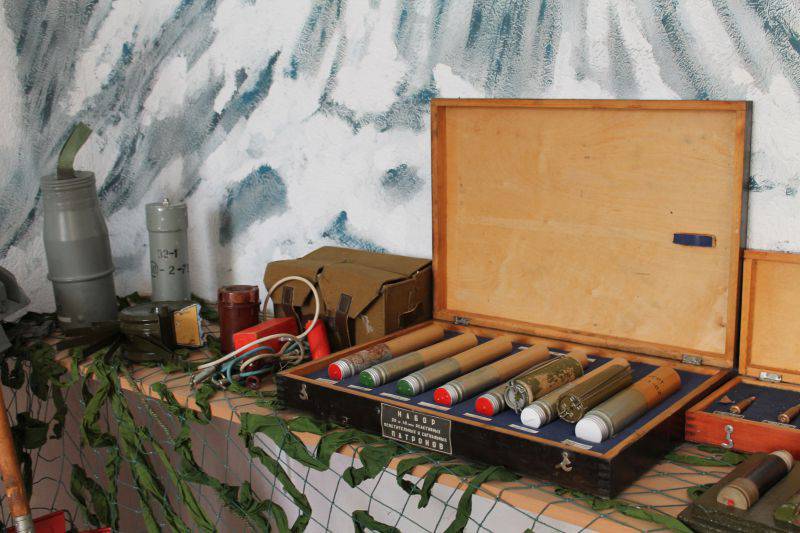 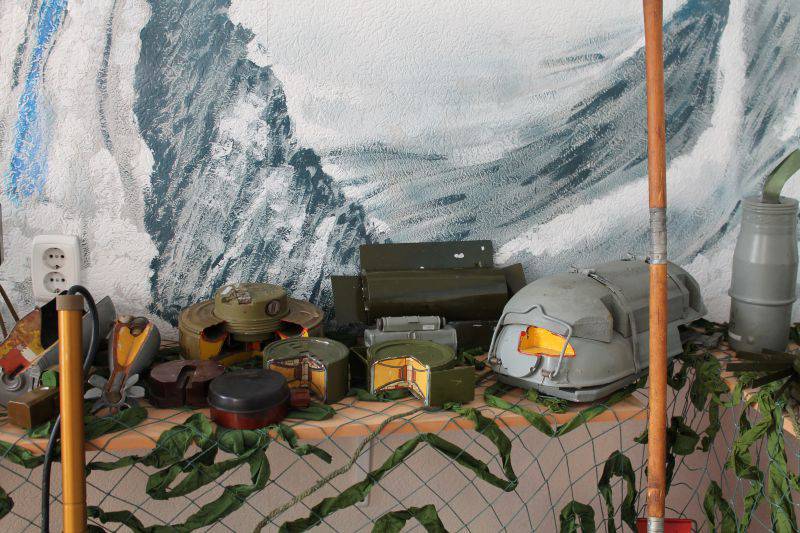 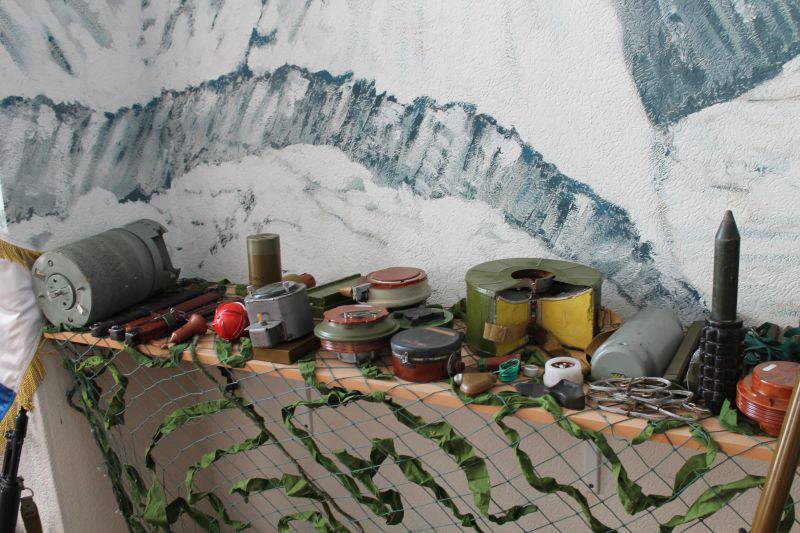 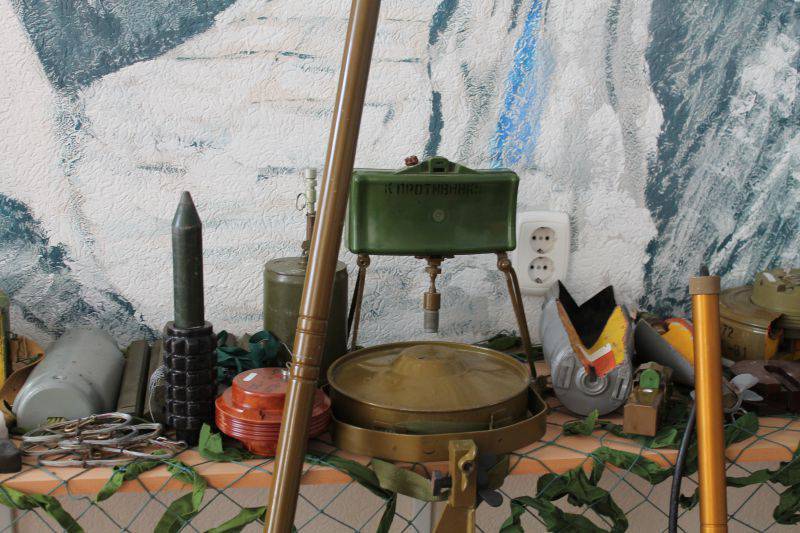 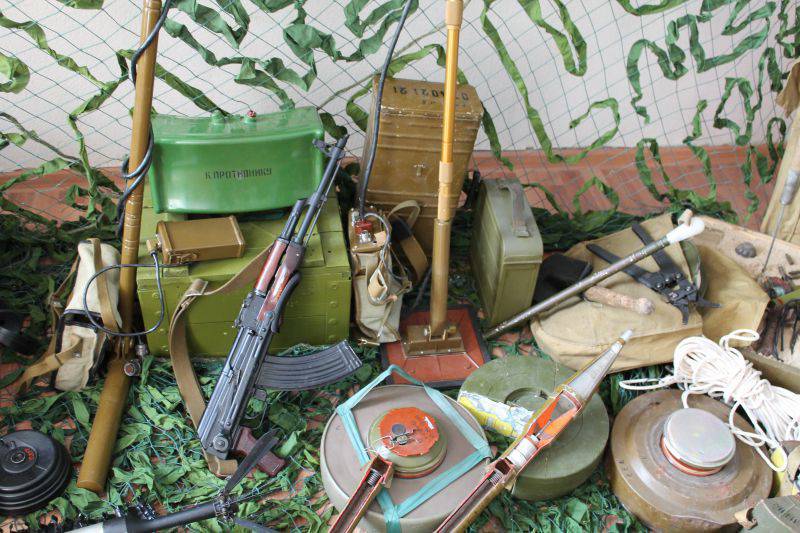 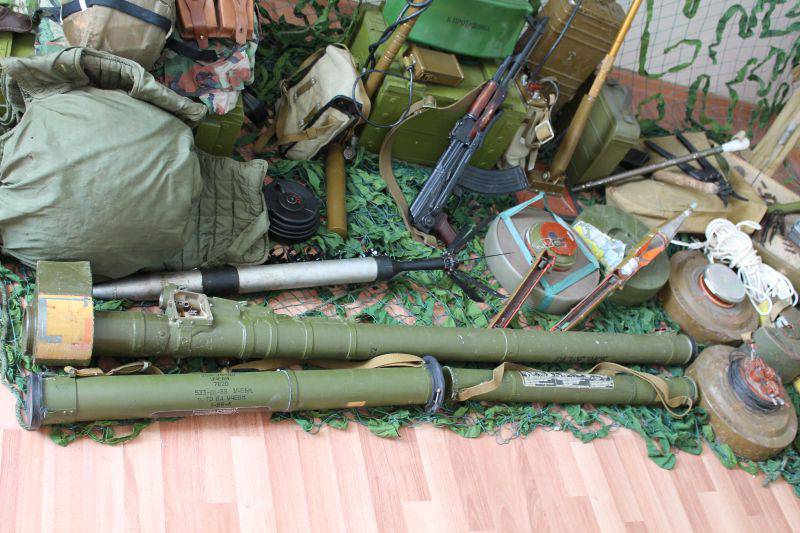 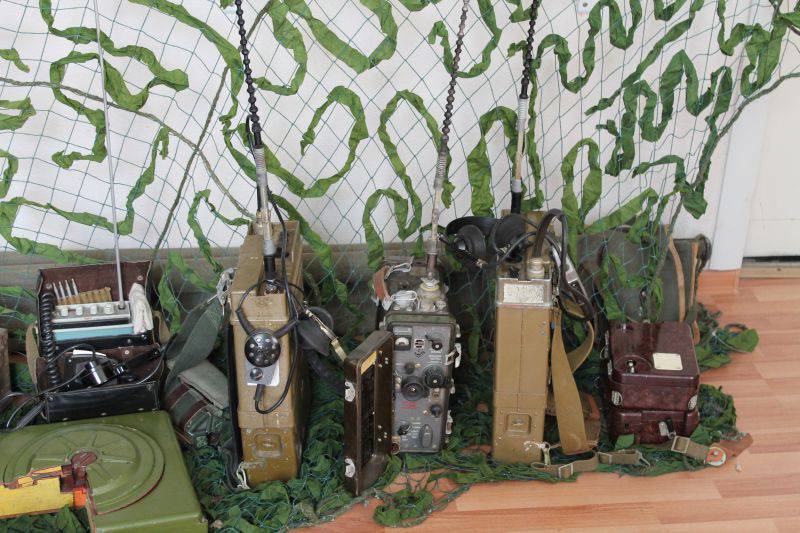 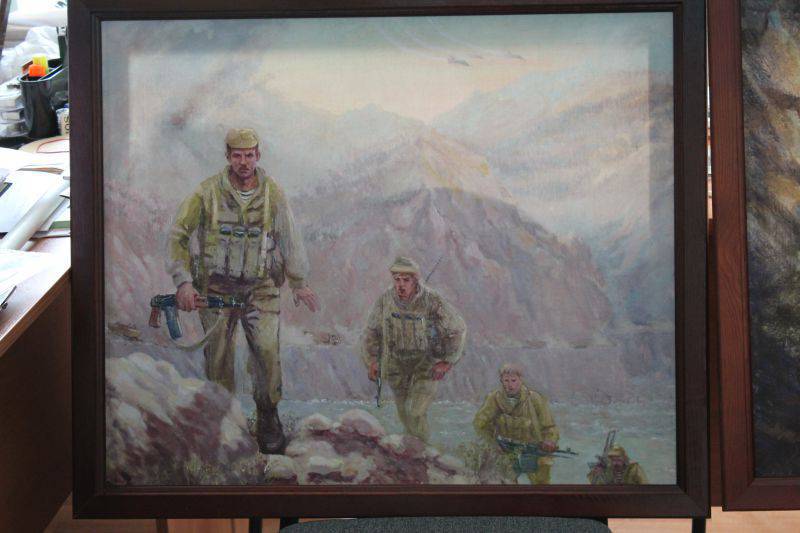 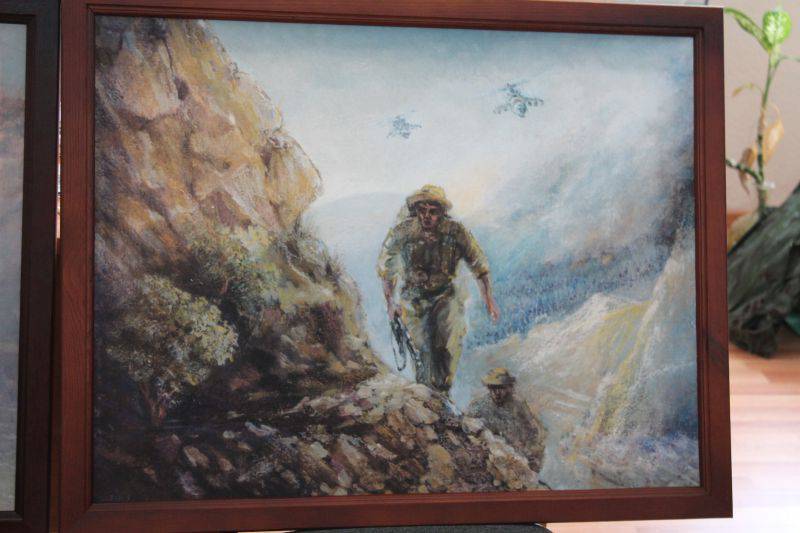 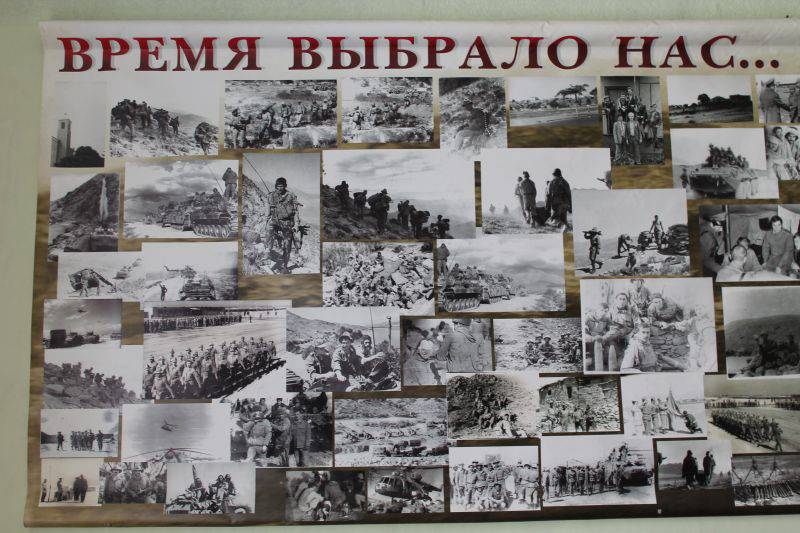 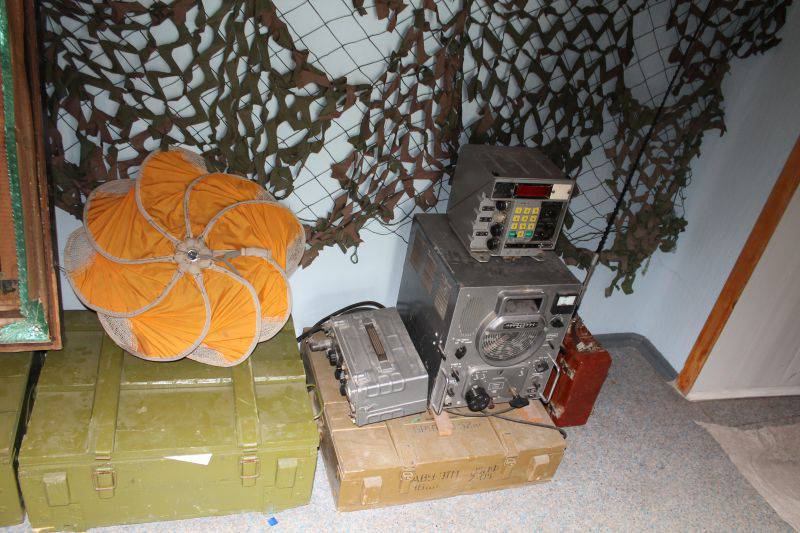 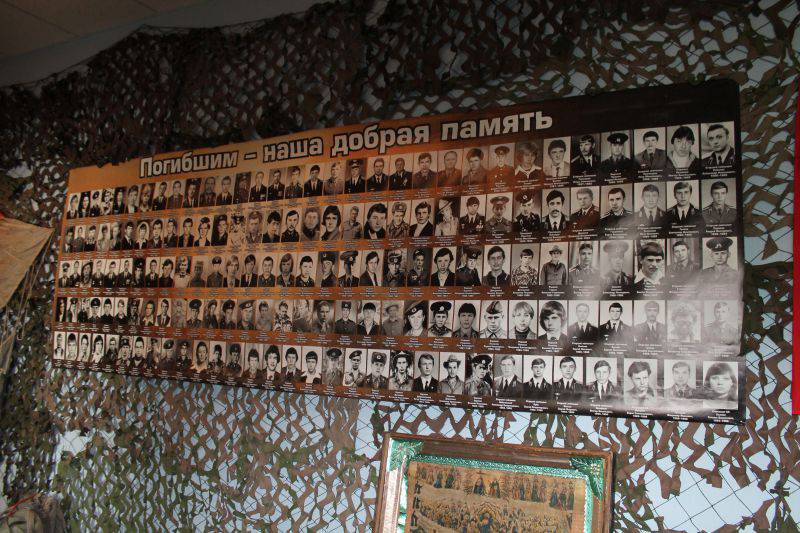 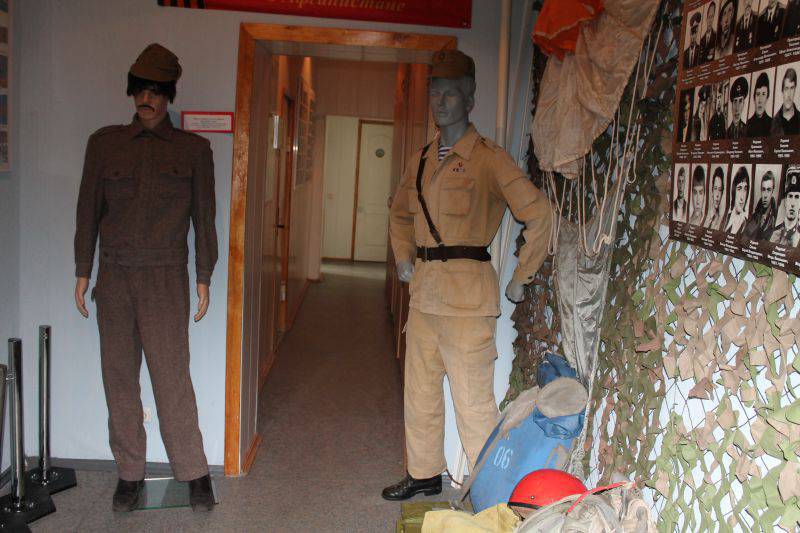 By the way, the guardsman's suit is real. He was presented to the museum by a man who stormed the palace in this costume.

Ctrl Enter
Noticed oshЫbku Highlight text and press. Ctrl + Enter
We are
Memory sake. In the Donetsk Museum of the Great Patriotic War, a diorama of the battle at Saur-Grave openedBlack and white of modern patriotism. A word about monuments
Military Reviewin Yandex News
Military Reviewin Google News
12 comments
Information
Dear reader, to leave comments on the publication, you must to register.