The crash of the carrier rocket "Proton-M"

19 May 2015
107
16 May another scheduled launch of a Proton-M launch vehicle with a spacecraft on board failed. Due to some, not yet installed, problems with the operation of some units, the payload was not brought into the calculated orbit. The rocket with the spacecraft burned in dense layers of the atmosphere. It was alleged that some debris could fall in the Trans-Baikal Territory. 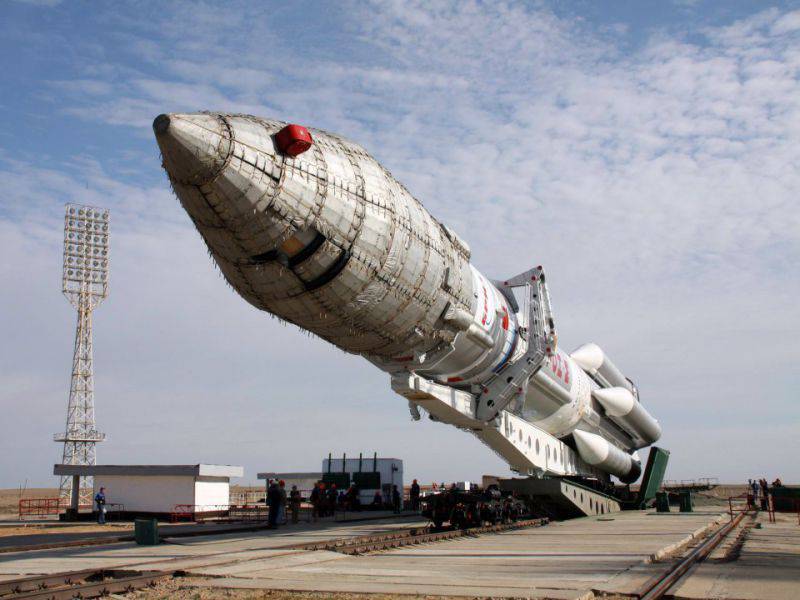 The most common launch of the Proton-M rocket ended in failure, the goal of which was to launch the Mexican communications satellite MexSat-1 into orbit. To launch this device into geostationary orbit, it was planned to use the Proton-M launch vehicle and the Breeze-M upper stage. The spacecraft MexSat-1 was supposed to replenish the satellite constellation that provides communications in Central and South America. The MexSat-1 satellite is based on the Boeing 702HP platform, used as the basis for the construction of geostationary communications satellite.

Preparations for the launch was in accordance with the planned schedule. So, in the afternoon of May 13, Roscosmos announced the holding of a council of technical managers. Responsible persons heard reports from work managers, after which they decided to take the launch vehicle to the launch pad. The procedure of taking the Proton-M missile to the 200 site began on May 14 at 03: 30 Moscow time.

The launch of the Proton-M rocket with the Mexican satellite MexSat-1 took place on 16 in May at 08: 47 MSK. The first few minutes of the rocket flight took place in normal mode. According to Roskosmos, at the 497 second flight some problems occurred in the operation of third-stage engines. Shortly after receiving information about the abnormal operation of the engines, telemetry transmission ceased. The accident occurred about a minute before the scheduled moment of separation of the upper stage with the payload.

It soon became clear that the separation of the third stage did not happen and the satellite was probably lost. For the next few hours, the specialists of the rocket industry found out the fate of the launch vehicle and its payload, and also tried to establish the consequences of the accident. Literally half an hour after the loss of communication with the rocket in the domestic media, the first reports appeared about the accident, including with some technical details. So, RIA News With reference to a representative of the space industry reported that the satellite MexSat-1, most likely, will be considered lost. In addition, the source said that this device was planned to be put into orbit at an altitude of about 36 thousand km, but it did not even rise by one thousand.

According to Roskosmos, all the wreckage of the third stage of the Proton-M rocket and the Mexican satellite burned in the atmosphere. Nevertheless, in the morning there were reports of the fall of some fragments. RIA Novosti, citing a source in the emergency services, reported the fall of one of the fragments of the destroyed aggregates. In this case, the chip fell at a distance from the settlements. The place of his fall was not specified. Also in the morning on May 16, there were reports of a possible release of toxic propellant components that did not burn during the accident or the fall of debris.

By the evening of May 16 received messages from Mexico. Minister of Communications and Transport Gerardo Ruiz Esparza said that the loss of the satellite MexSat-1 will not affect the operation of communication systems. The operation of satellite systems in Mexico is guaranteed. In addition, the Minister noted that Mexico, developing satellite technologies, should be aware of the high risks in this area. Nevertheless, the risks are fully paid off by the benefits of launching and operating spacecraft. The satellite and its launch cost Mexico 390 million US dollars. The device and the launch were insured, which will allow the Mexican side to fully offset its costs.

The day after the accident, a commission was created, which is to be investigated. The chairman of the commission was the head of Roscosmos, Igor Komarov. Deputy Director General of the GKNPTs named for them. Mv Khrunicheva Alexander Medvedev. In addition to them, the commission included representatives of Roskosmos, the Ministry of Defense, the Board of the Military-Industrial Commission, as well as employees of various organizations in the space industry.

The causes of the accident have not yet been determined. The investigation will take some time, after which the commission will be able to name the prerequisites for the rocket crash. Without waiting for the conclusions of the commission, the public, experts and the press are trying to build their own assumptions about the possible causes of abnormal operation of third-stage engines.

Due to the lack of published information, the public and specialists who do not have access to the investigation materials are unlikely to accurately determine the causes of the accident. For this reason, at the moment there are different versions trying to explain the occurrence of prerequisites for the accident and the course of events on the 497 second flight.

The most plausible and plausible version is of any marriage made during the construction of the launch vehicle. This version is supported by the results of the investigation of previous accidents of Proton missiles. So, the cause of emergency launches 3 July 2013 of the year and 16 May 2014-th were the design of the launch vehicle and improper assembly. In particular, the cause of the 2013 accident of the year was the incorrect fixing of the angular velocity sensors: three of the six such devices were assembled in the wrong position when the rocket was assembled.

It is possible that some problems in the design of the launch vehicle or its individual components became the cause of the recent accident. However, the final conclusions should be made by an official commission. She has to examine all the available materials and conduct a full investigation. It may take from several weeks to several months to carry out all the necessary work. Roscosmos promises to report separately on the results of the commission’s work.