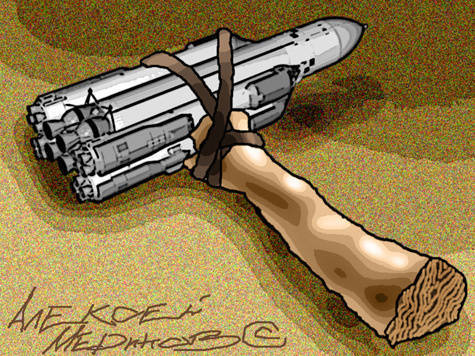 October 7 as part of a specially organized faction of the Communist Party of the Russian Federation in the State Duma of the government hour before the deputies the current head of Roscosmos, Mr. Popovkin, spoke The parliamentarians organized such a meeting in order to find out from Vladimir Popovkin the reasons for the recent failures of the Russian space agency. In fairness, it should be said that some of the recent Roscosmos fiasco occurred under the former leader, Mr. Perminov, but it was Popovkin who had to take the fire on himself.

Everyone was waiting for the Head of Roscosmos to tell the deputies only about why mistakes were made in the preparation of several spacecraft and the booster module, and how these problems would be solved in the future, while Popovkin took, and, frankly, he was stunned by parliamentarians with other sensational information . And this information concerns plans to abandon the development of the new-generation Rus-M rocket.

But first things first. Vladimir began his speech with the failures of Roskosmos. From the podium, he told several amusing stories that most of the blame for failed launches with the losses of hundreds of millions of rubles lies with the unstable nineties. They say that little money was allocated for space, qualified personnel were forced out of the industry, development was curtailed, companies were falling apart - in short, trouble and trouble. Further, according to the former deputy minister of defense, everything was not all smooth either: although the companies received funds for the development of spacecraft, these funds were clearly not enough. And, in the end, the mistakes of developers, programmers, welders, checking - in general, if you follow the logic of Mr. Popovkin, then it is just natural sabotage. But Popovkin must be given his due - he assured the deputies that from now on all those vehicles destined to ascend into space will undergo a total check not only in the factory workshops, but also at the space center. The decision, of course, belated, but better, as you know, late than never. After talking about the work of the Khrunichev Center, NPO Energia and TsSKB Progress, the only ones left afloat to space technology manufacturers, Vladimir Popovkin switched to new tasks of Roskosmos. And it was here that a real sensation from Popovkin came into being.

He said that Roskosmos is suspending the development of the new-generation Rus-M rocket. For many who were present in the hall, these words became a real “bomb”. The reaction was, to put it mildly, not entirely positive. The fact is that Rus-M is a project that would allow Russia to bring both manned and unmanned ships into space in a few years. "Rus-M" was supposed to replace the morally obsolete "Unions". Moreover, the rocket was already completely “drawn”, as they say, on paper, and all that remained was to be put into production. And the development of the rocket has already managed to spend a hefty sum (the total cost of the project was estimated at 202 billion rubles). And now - they suddenly decided to stop the project ...

Vladimir Popovkin explained to the audience why Roskosmos decided to abandon the further development of Rus-M. He stated that, it turns out, the Rus-M rocket almost completely copies the Angara rocket project. So, as it is fashionable to say today, why pay twice.
But in this case it should be noted that the Rus-M was also planned as a basic rocket for the implementation of the so-called lunar program. It turns out that Vladimir Popovkin decided either to abandon the implementation of this program, or thought that the peak carrying capacity of the Angara (24 ton) would be enough to implement it. By the way, Rus-M was calculated on a payload capacity of up to 54 tons. Very similar development - nothing to say ...
Let's not forget that “Angara” is also far from complete. Its first launch was scheduled for another 2005 year, then it was transferred a couple of times (once in 2010, when the RD-191 rocket engine burned out). Now Mr. Popovkin assures that the Angara will fly in 2013 year.

With the refusal of further development, "Rusi-M" is hanging in the air and the need to build a new cosmodrome in the Far Eastern region of the country (Vostochny cosmodrome in the Amur region). After all, it was planned as a launching pad specifically for the Rus-M missiles. But Vladimir Popovkin said that Roscosmos does not intend to abandon the construction of Vostochniy, if only because the annual rent of Baikonur costs Russia as much as 115 million dollars.

And if the cosmodrome will be built near the Amur coast, then for what purposes? The head of Roskosmos said that from the Vostochny they would initially take off all the same, in his opinion, reliable "Unions", or rather "Unions-2", which, in fact, are another modification of the "seven", developed half a century ago.

At the same time, Popovkin adds that Roscosmos plans to “see” how the Soyuz-2 will take off. If they take off badly, it does not exclude the possibility of returning to the development of a new rocket again. Some inconsistent position. If we proceed from the considerations that Vladimir Popovkin preaches, then it is possible not to develop anything new if the old one works: neither television sets, nor refrigerators, nor automobiles. And the development begins only after the old technology begins to fall apart in parts. There is a VAZ- "five", which stalls, heats, but goes, then why, according to Popovkin's logic, to change something ... The logic is, of course, strategic. With her, we will definitely take a leading position in the space industry.
However, Popovkin for financial transparency. He declares that now he will almost personally spend every ruble in the form of reporting documentation on the Internet, so that people can see how the national funds are spent by Roscosmos.

The general impression from the performance of Mr. Popovkin before the deputies as from a retro concert. It seems and thoroughly, sometimes even fun, but without the right to development.