Signs and symbols of the Victory Parade 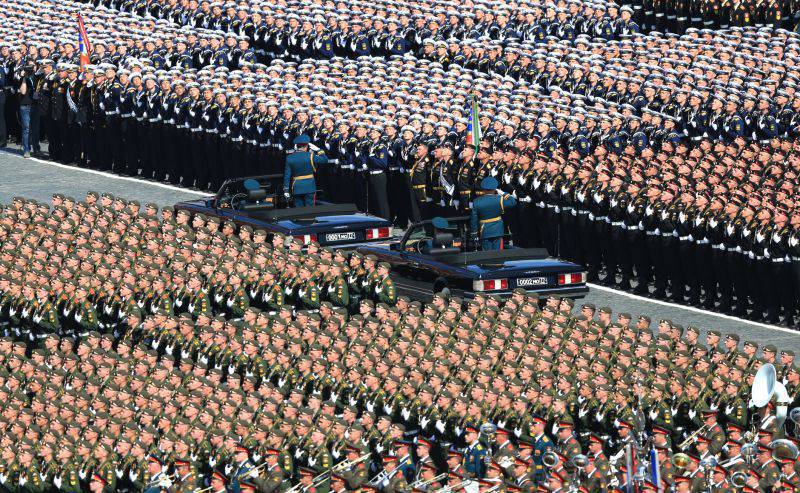 The older the statehood of a given people, the more signs and symbols it carries история. The preservation of historical memory, the protection of signs and symbols of the traditions and history of the people is the most important function of the state and the responsible part of society (the national elite). To destroy the people, enough to trample its history. And when children and grandchildren forget the exploits of their fathers and grandfathers, they will not even understand that they have become traitors to their people - and therefore, themselves.

The 9 parade of May 2015 of the year on Red Square, dedicated to the 70 anniversary of the Great Victory over the German (and, in fact, Anglo-Saxon - sponsors and their performers) fascism, presented to the world many signs and symbols. Those to whom they were addressed, they were seen and heard ... 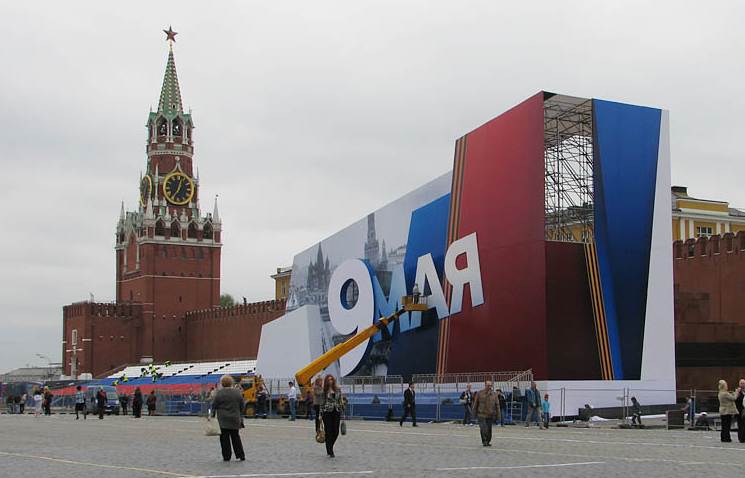 Defense Minister S. Shoigu made the sign of the cross to the camera 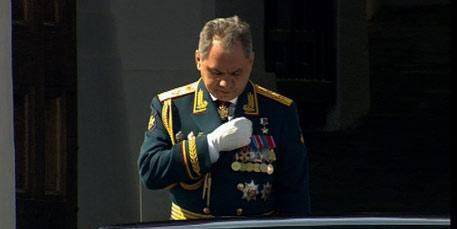 Meaning of these signs

The red project is not considered by the leadership of Russia as the ideological basis of our development. The thousand-year history of the statehood of Russia under the signs of Orthodoxy and autocracy is in bad agreement with the communist symbols, imposed on us by the West.

The decision was made a long time ago, and, in my opinion, the decision is correct: The red project is our tragic and at the same time glorious great story. But the further development of Russia under the red banner is "inexpedient", however unpleasant it may sound for real (without quotes) patriots of Russia, who sincerely believe that "Marx's doctrine is omnipotent because it is true."

And with China, and with other countries, without exception, modern Russia will not build relations on any supranational "Universal" organizational and ideological basis such as the Comintern or gosdepovskih institutions of "freedom and democracy" and the network of NGOs around the world. It is this sign that was sent to all who equally wants to build a relationship with us that Russia will not impose "your charter" on anyone (or their ideology, as it was not so long ago, when some African cannibal dictator declared his country a socialist country, and immediately received for this from our elderly Politburo Tanks, Armored personnel carriers, Kalash, and, of course, currency - for the "development of socialism").

Parade calculations of the allies of Russia 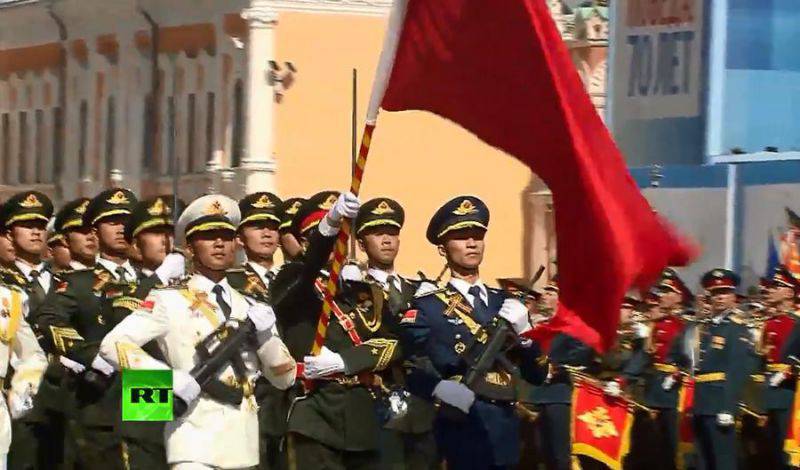 Participation in the Parade of parade calculations from friendly powers that were held in this order: Azerbaijan, Armenia, Belarus, Kazakhstan, Kyrgyzstan, Tajikistan - the republics of the former USSR; India, Mongolia, Serbia, China are our closest allies.

For Azerbaijan and Armenia, this is a very important and significant event. The wise leaders of these states - I. Aliyev and S. Sargsyan - understand and do everything to ensure that hostility between two nations, which for centuries together, side by side (in cities and villages) lived peacefully in the territory of the Russian Empire, and then the USSR gone to no. This hostility is organized and paid for by the West, for which friendship between neighboring nations violates one of the main conditions for the existence of Western civilization - “divide and rule”.

Closes Allied column ceremonial calculation of the PLA. Not alphabetically. And by value. The meaning of this sign must be understood as follows: "We will cover you, you can count on us."

In general, the participation of foreign ceremonial calculations in Moscow on Red Square (and no matter for what reason) suggests that Russia can quick and easy to turn on all their gigantic opportunities (even without resorting to a mobilization economy), and herself translate from the status of a regional power (where we themselves themselves and defined 25 years ago ... Well, so wanted!) in the status of world power (just got sick be a regional power). 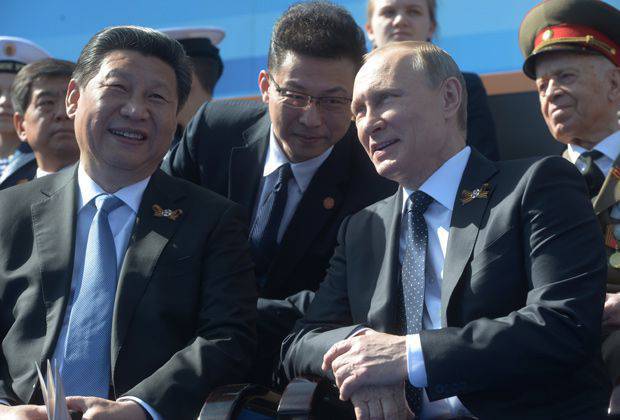 The most honorable place in the Parade for the Chinese guest, the chairman of the People's Republic of China and the secretary general of the CPC Central Committee, on Putin’s right hand, does not in itself carry any special meanings. But the thing is that this time the other guests of the heads of state were seated away from this couple and additionally “diluted” by Soviet generals-veterans of the Great Patriotic War. And only two state leaders sat next pair - Putin and Xi Jinping. Without a doubt, it was a sign, and it was sent to our overseas and not very partners: Russia and China are ready to jointly expand their areas of influence, and of course, at the expense of Western countries.

The West made a mistake: more recently both Russia and China were ready to join the club of the Western powers as junior partners. But PARTNERS! But the West considered that Russia and China would manage (and wipe out) without partner status (they wanted to let us expend, that is, to use countries and peoples as a consumable material for maintaining their global domination).

Once, exactly 70 years ago, the world was already divided between two players - the USA and the USSR. And about five years before that, it had never occurred to ANYONE that such a situation would in principle be possible.
This is a sign to those who still doubt that the story develops progressively and does not end in any FukUyam. 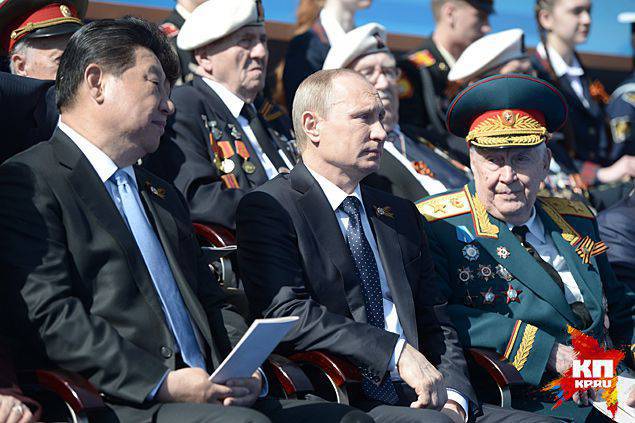 Few people paid attention ... During the passage of the column of the legendary T-34 tanks and SAU-100 self-propelled guns in the camera lens of the live broadcast of the parade of military equipment appeared Army General Makhmut Akhmetovich Gareevsitting on the left hand of GDP. The state television camera on this day did not show the viewers of the whole world JUST SO. So General Gareev is not a simple general, but the main confidant of the President of the Russian Federation on the military history of the Great Patriotic War and its results.

For reference from Wikipedia:
“I became actively involved in military science work back in 60-70-s. He is the author of over 100 scientific papers, over 300 articles and publications in collections, journals, newspapers. Wrote books “Tactical teachings and maneuvers”, “M. V. Frunze - military theorist "," Combined arms exercises "," Ambiguous pages of war "," My last war ".
After creating the Academy of Military Sciences, a non-governmental research organization in February 1995, he was elected its president. Much engaged in the study of the history of the Great Patriotic War. He actively participates in scientific discussions, opposes falsification of the history of war. He believes that the desire to challenge the Soviet victory over fascism is closely linked to the propaganda campaign against modern Russia. Thousands of previously unknown documents about the war were put into circulation in scientific collections edited by Gareev. Served in the transfer of "Directive number 1 - War."
The one who was at least a little interested in the alternative, not official history of the Second World War, is well acquainted with the writer-historian Viktor Suvorov (Vladimir Rezun), who, "looking from London", successfully popularized in 90 and in 2000 in Russian and for Russian readers the main imperative of the West is that Stalin’s Russia is no better than Hitler’s Germany: Ledokol is a documentary-publicistic book by Viktor Suvorov, in which it is argued using the argument that the USSR was preparing an invasion of Germany in July 1941, and, having unleashed the Great Patriotic War, Hitler had only anticipated Soviet aggressive plans.

The writer V. Suvorov often referred to General M. Gareev as his main opponent in the history of the beginning of the Second World War.

These signs - Red Square, Victory Parade, Putin and Gareyev - need to be understood only as “You are trying in vain”: the Supreme Commander attaches special importance to the historical memory of the Russian people. And the times when the samizdat works of A. Solzhenitsyn and the giant official circulations of V. Suvorov (Rezun) walked along the hands of Soviet and Russian citizens will never return. We will no longer allow hanging noodles of Western anti-Russian propaganda on our territory.

This is also the answer to those of our “patriots”, who cannot calm down in any way, that Russia does not have its own ideology, its own national idea like that of the USSR.

There are immutable for all nations traditional (conservative) values: family, children, older generation, homeland, morality, ethics, beauty, respect, love, sacrifice - in the name of preserving all these values ​​... So why did the gentlemen-comrades "patriots" reproach Putin for not accepting " slaughter "for arming against all bad and for all good ideology, the main goal of which is the final victory over the enemies of Russia?

My answer to the "patriots" is: there can be no "final" victory of good over evil. Can't win the night day. You can not divide the magnet into "plus" and "minus". Life cannot overcome death ... But to destroy the people "for all good" for the gentlemen-patriots is a sacred cause ... Bolshevism, especially in its extremely painful form as Trotskyism (with whom Comrade Stalin struggled, for which he is now most reproached and hated by our liberals-at-feed-in-state-department), is completely rejected by the leadership of modern Russia.

The Victory Parade of 9 May 2015, as a multitude of signs and symbols, presented to the whole world a simple and clear answer to all the philosophical-civilizational questions in this topic: Russia carried the XMNUMX “isms” of 20, alien to anyone, and more Russian, in the broad sense of this adjective wordsto the people. We will no longer step on this rake. Do not try.

And if someone else did not understand and will continue to insist ... So much for such, quite intelligible and understandable OTHER signs and symbols of the Parade of our Victory: 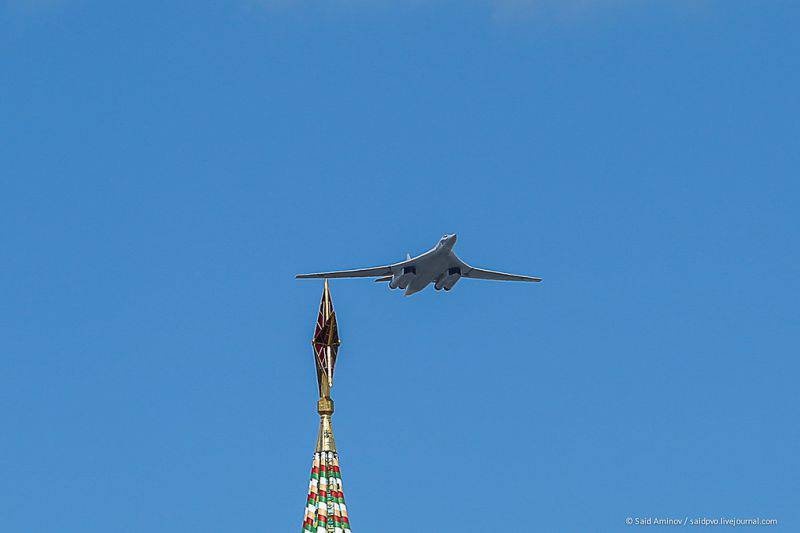 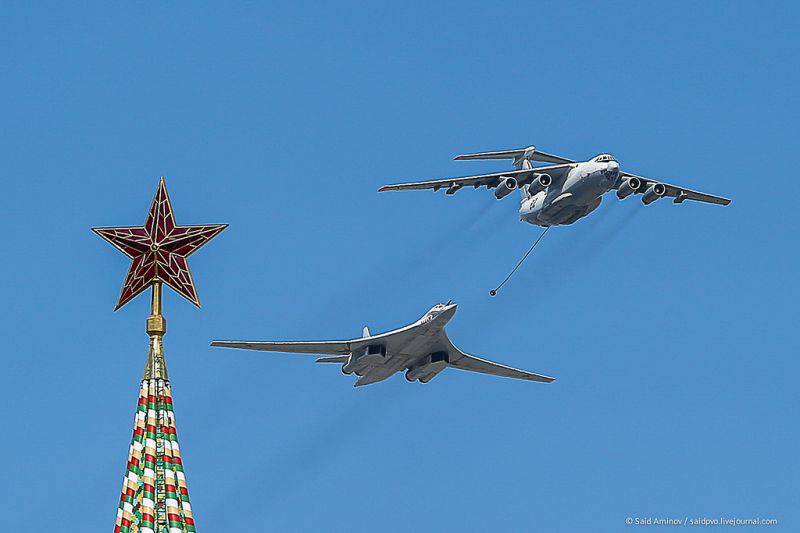 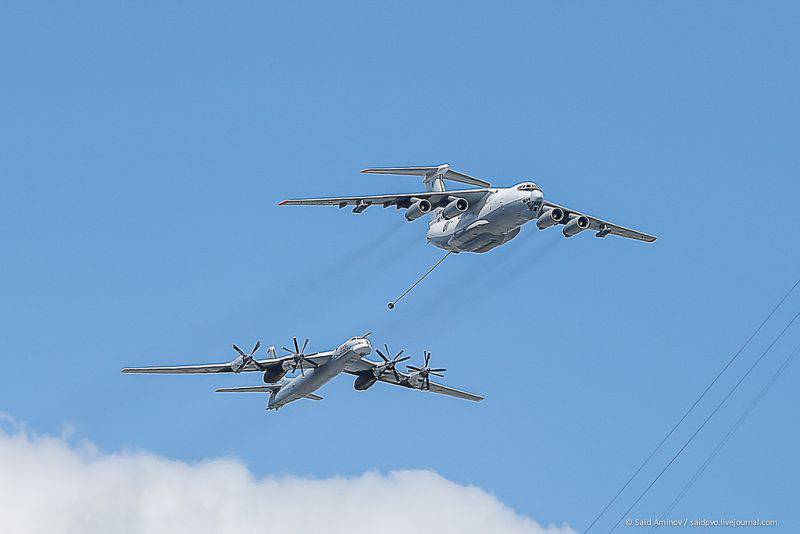 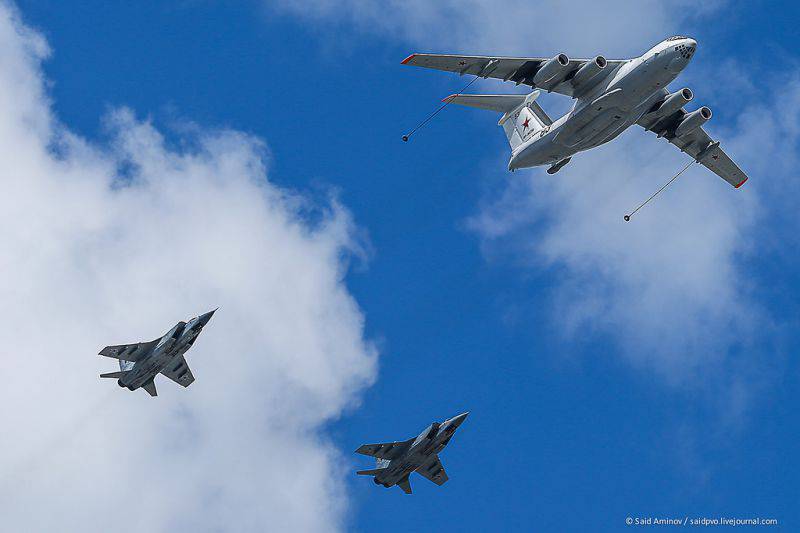 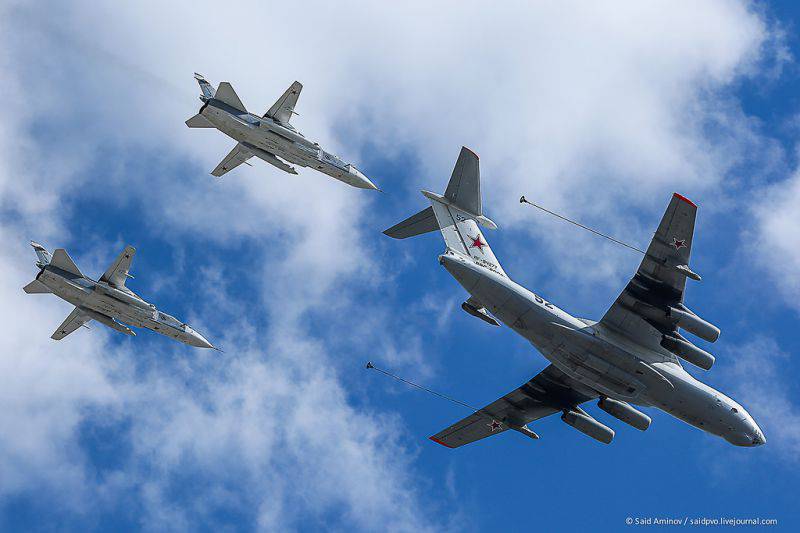 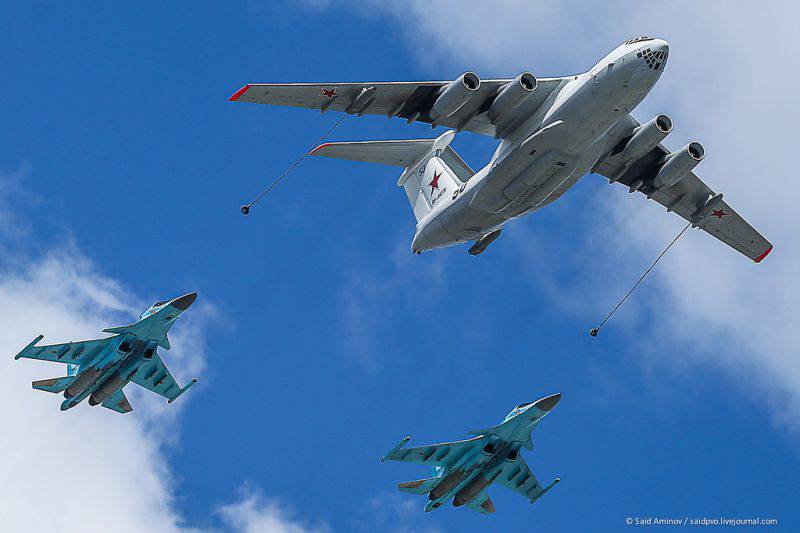